Hello Captains, this is a guide pertaining details about the enemies on mob floors. This is the main guide for Valkyrie recommendations based on normal weather, or at least the weather will not influence your fight against mobs.

Types of Mobs:
There are 3 types of mobs you can find in Dirac Sea: -Has X quantity of mobs
-Only 4 can be out at a time however; once you kill 1, the next elite mob will spawn until none left 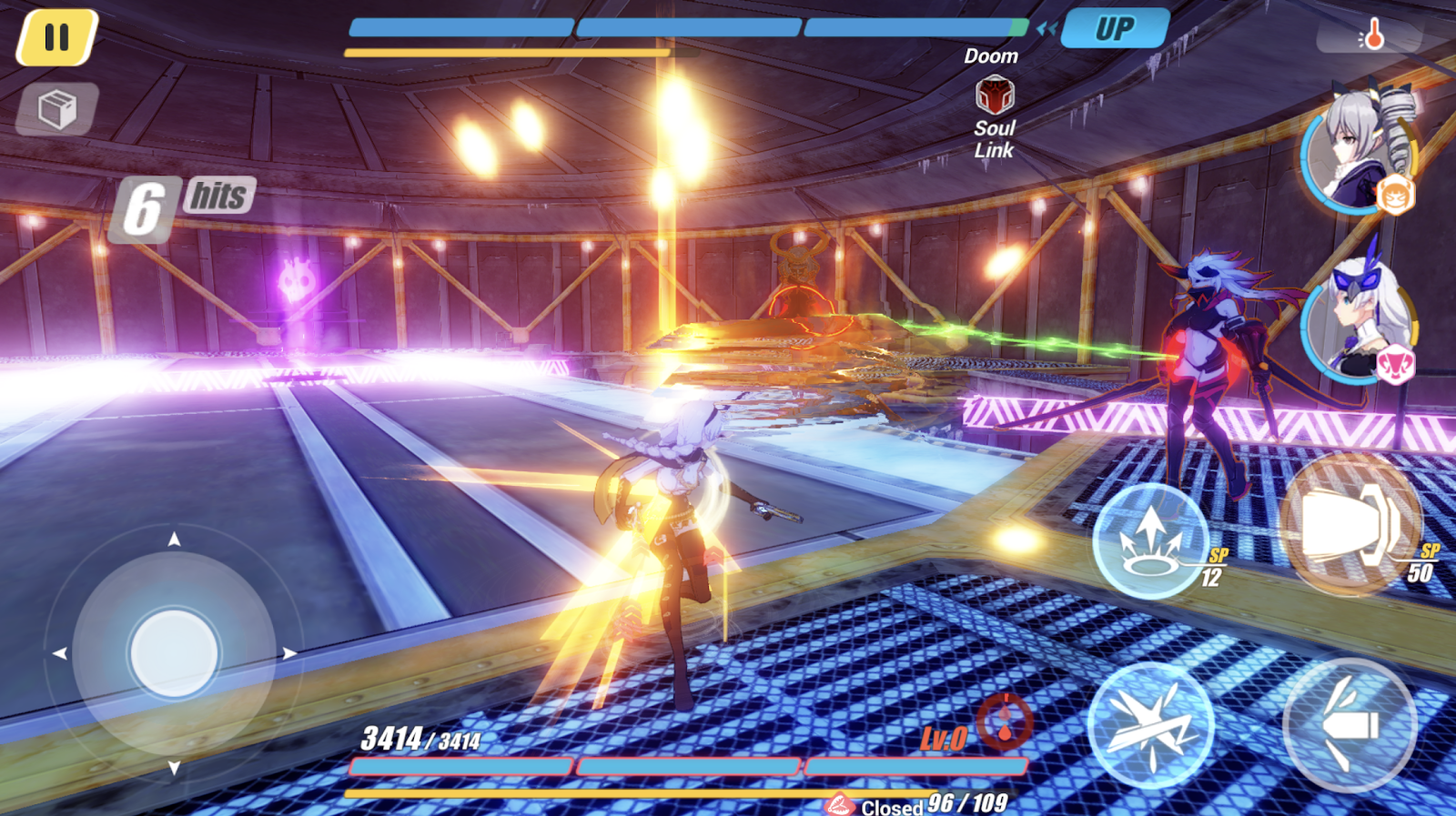 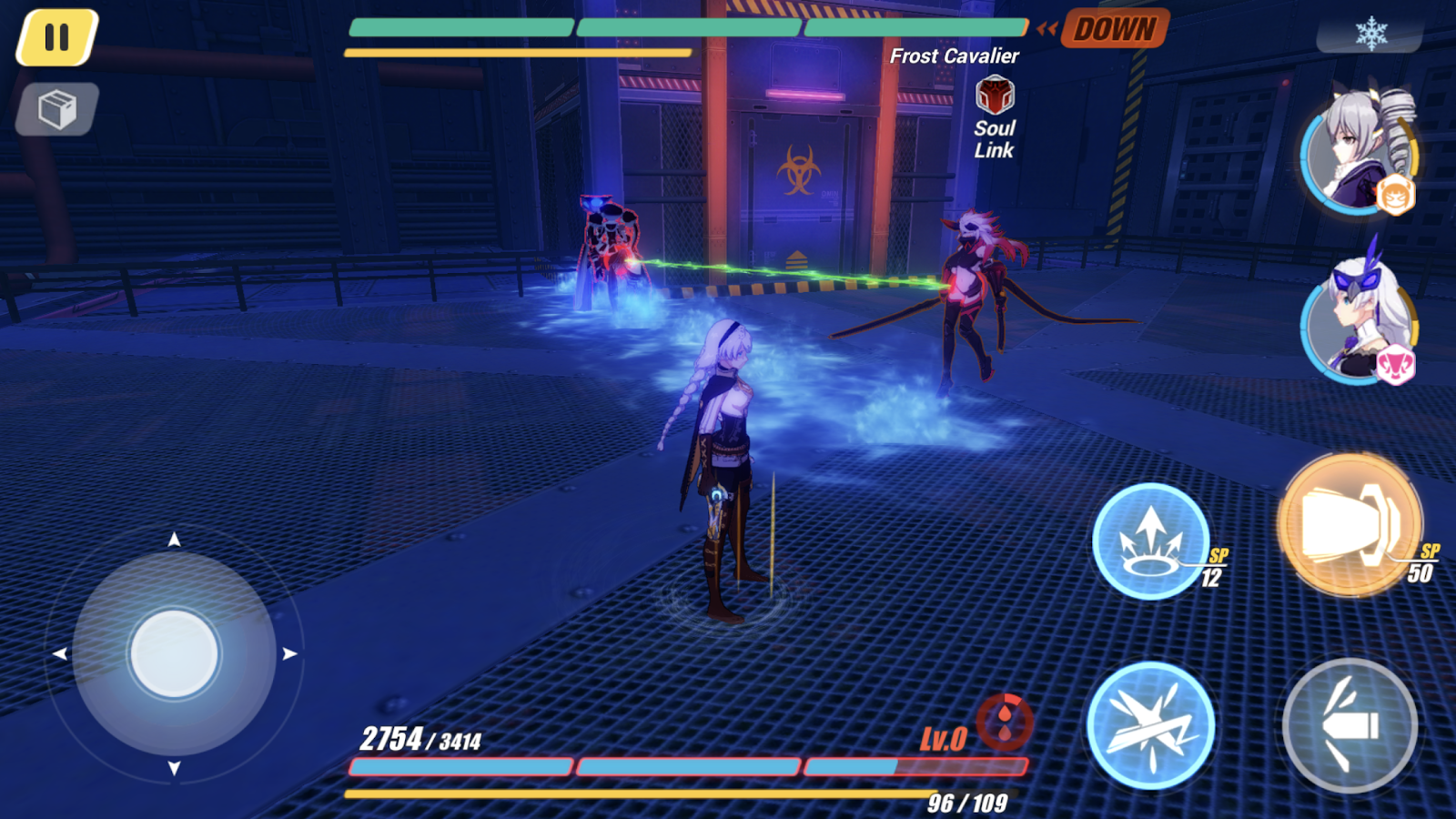 -Has X even quantity of mobs; at least 2 mobs
Only two elites can be out at a time.

Each pair has the Soul Link status. After an enemy with Soul Link is depleted of all its HP, if the other enemy that it's connected to with a green line (as depicted in the picture) doesn't die shortly after, the one who died will come back to life with a small portion of its HP. 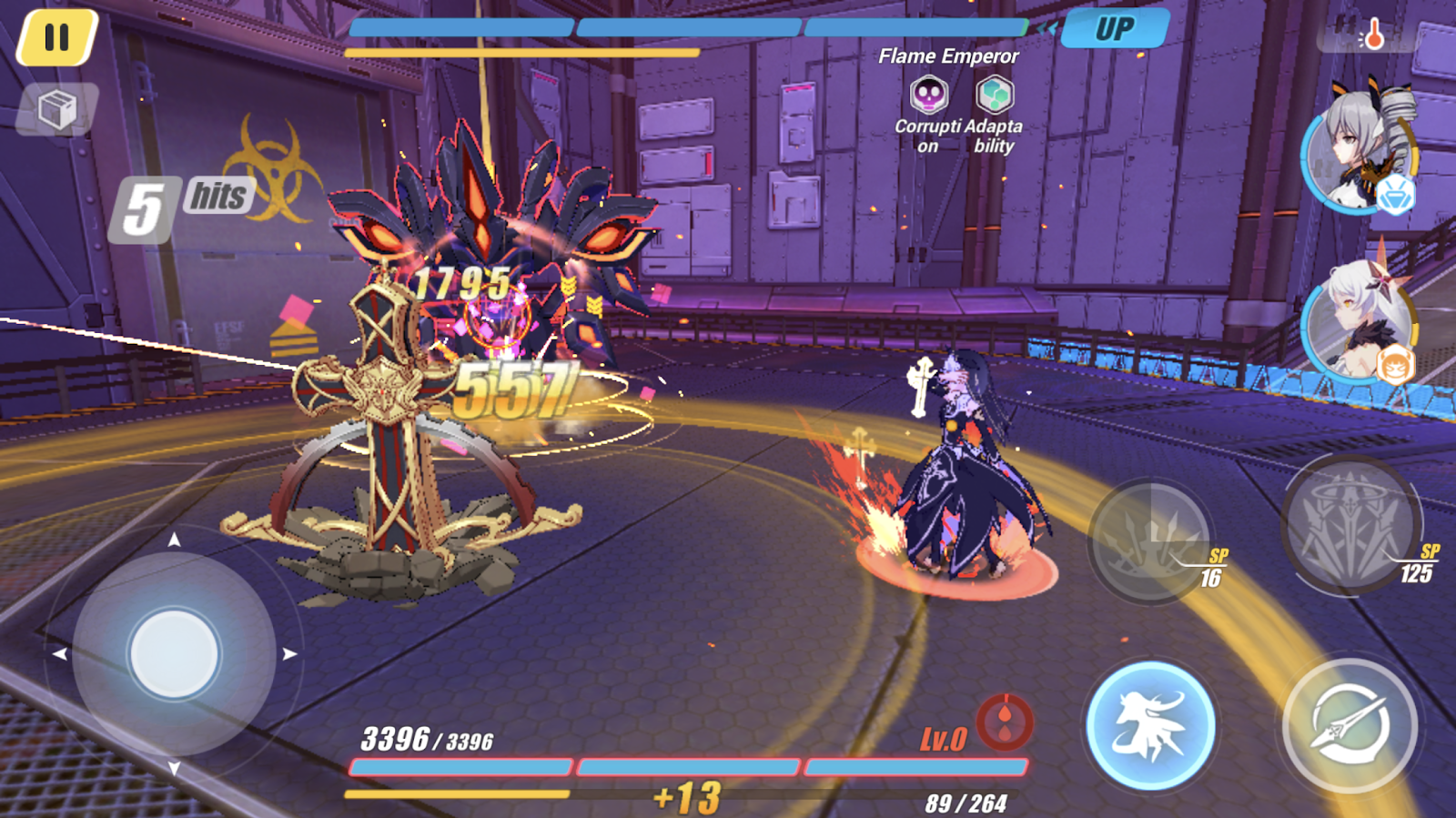 Escentially a mini boss. There will only be 1 elite in a solo mob fight with at least two statuses:

Corruption - upon hitting you, you will lose sp in a poison-like fashion for some time.

Adaptability - a breakable&recoverable shield that prevents the mob from a status ailment more than once, other than impair and weaken, until the shield breaks.

If you defeat all the mobs on the current floor, the corresponding floor boss(es) loses its "+50% HP, -60% taken" buff. It's recommended to remove this buff

Special Mobs to be wary of:
These types of mobs can be found frequently in Dirac Sea. These are the types you should watch out the most since they can easily mess up your momentum and even kill your valkyrie if there's a slight mistake.

These aggressive Meches are fast and erratic. They can quickly unleash a wide shockwave on the floor as well has set off a nasty pull and crush kill-combo. It's best to keep your distance from these guys and also be aware of the direction they are facing when they stick their arms out. 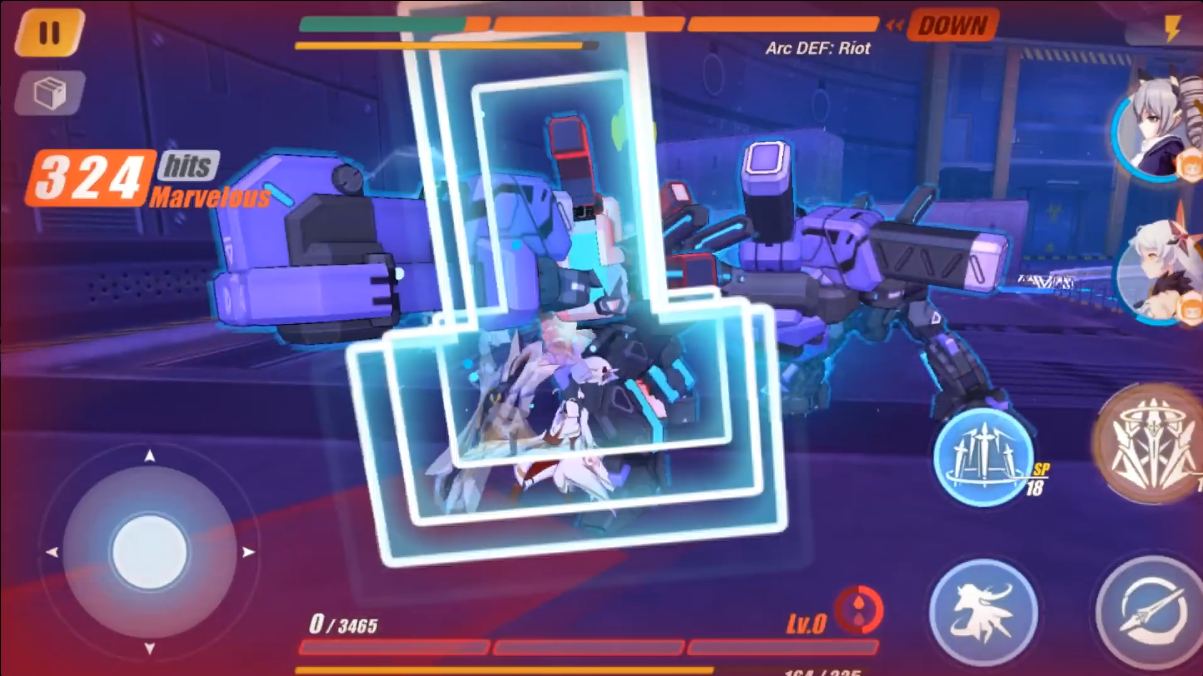 These rather annoying elite types of mobs. They leave an ice residue on the floor everywhere they attack. If you touch the residue, you will be slowed. If hit, you will be frozen. Being careless around these mobs can result in death. Melee-based valkyries will have a harder time against these type of mobs.

With proper stigmatas, she can easily round up elite mobs and duo elites mobs for quick gathering without wasting sp and time to gather them all up. This is really good since there can only be a limited number of elite mobs out at a time. In addition, she can easily proc the QTE of another valk in her team.

A healer and provides passive 80% impair to a random single target when not in battle. Great for fighting against fights with only 1-2 enemies possible in the battle. Healing allows your valkyries to recover a fight that could drag out for too long and/or is a bit more difficult than usual. And at SSS rank, she can prevent a teammate from potential death and therefore a potential failure.

A top tier physical support. Can 50% impair anytime you want on point easily. Her ultimate gathers and inflicts 75% impair; however costly. With Judah, she can keep mobs in place and from surrounding you. While with 11th, she can increase the critical rate of your team even further, thus providing more damage.

A gatherer valk. At 50sp, she can cast an ultimate that can gather troops in a large radius, as well as bleed if her rank is high enough.

Useful starting at SS rank. She provides a barrier to her team. While the barrier is active, the barrier provides an elemental dmg buff.

A top tier farmable DPS valkyrie that is a viable to all captains from F2P to whales. The higher her rank, the stronger she gets. Get her to SSS rank ASAP.

Another top tier farmable DPS valkyrie. Against MECH enemies, she shreds them down, Like Night Squire, the higher her rank, the stronger she gets. Get her to SSS rank ASAP.

Team Recommendations:
Here are some recommended teams that can help you with your experiences in Dirac Sea. Obviously you do not need to copy everything here exactly. These are merely sample teams to give you some idea of what you could run in terms of synergy, efficiency, and performance.

The first valkyrie in the teams listed below are the leaders.

Vs. Elite Mobs and Duo-Elite Mobs:
When fighting these two type of mobs, what you typically want in a team is 1 main DPS, 1 sub DPS (in case your main DPS has a bad matchup), and 1 support valkyrie. You can also run a Main DPS with 2 support valkyries if you're confident enough in that one valkyrie of yours.

The main DPS here is SS, with DB as a sub DPS/support and VR as the main main support.
Leading with DB, switch to VR to engage in a non-Solo fight. DB's leader skill will make it easier for VR and more importantly, SS to regain their SP after using their weapon/ultimate skills. Perform an ultimate evasion with VR, and then use either Artemis or Mjolnir's weapon skill. After that, Switch/QTE into DB to use Tyr's weapon skill to shield break. (Remember that time lock prolongs status ailments such as impair and freeze) Lastly, quickly switch/QTE into SS to freeze the enemy (with QTE or Ult) and attack. With proper dodging, repeat this until victory. This team is good against many enemies since the gather and splash dmgs saves you a lot of time.

Vs. Solo Elite Mobs:
Against Solo Elite Mobs, it's best to set up a team that is good against fighting single targets and treat them as a "mini boss" fight. Against single enemies, you can use certain stigmatas like

Jingwei T, which provides a 31% total DMG multiplier.
You can also use Valks and tactics that are good against solo targets such as BR, DP's passive single target impair, and missile-stacking with VC. However, do watch out in getting hit. Skillful captains get much more rewarded here. If you get hit even once, the Elite's corruption status will kick in, causing you to lose SP overtime for X time. So using a valkyrie that can easily invoke time fracture or even better, time lock against a solo elite, especially if it has erratic and quick movements, is highly recommended. Based on the type that the Elite is, you can build a team to counter that Elite.

I recommend creating a team with 1-2 supports that will either make the enemy more vulnerable or boost your DMG and with 1-2 DPS that can quickly take down the Elite in huge amounts of dmg. The longer the fight gets dragged out, the more likely you will be encountering both bleed and corruption.

Leading off with DP, your team will enjoy a leader skill that boosts your team's elemental DMG. You can start off with DP to set off some of her stigmata skills and/or dodge to invoke a time lock. Then you can switch to either VP or BR. Depending on your gear, you can use both VP and BR as the DPS and/or as support. Judah can lock down the enemy in place to keep them from moving so your DPS valk can safely attack without worrying too much about the Elite's actions. Blood Dance's weapon skill can make those hit by it receive up to 60% more elemental DMG. So as VP, you can set down your cross for dmg. Then attack (or skip attacking) until you need to switch to BR. BR will enjoy the initial 90 SP since she can easily use her weapon skill and Ultimate without needing to build up some SP. In addition, DP's passive impair will help your valks push some extra DMG in as well as being a safety net with her healing Ultimate skill.

Example #3: (Vs. Flame Emperor)
Author's note: Unfortunately, since it was F3 of a Disturbance of 39 in Dirac Sea: Gurren/RL, I had no choice but to use my "whale" team to defeat Flame Emperor. If you lack a good enough GK, you can consider another PHY valkyrie such as NS. Also this provided team is great for Elite Mobs, Duo Elite Mobs, Boss Fights. With the correct DPS, this physical team can also fight other types of enemies.

Here is a video demonstration starting from 3:30

Lead with GK (if your substitute physical DPS does not have a good enough leader skill, you can lead with DB instead.) Have your DPS start dealing DMG and build up any meters and SP. Don't take too long. Quickly switch to
A) DB (to time lock to proc CH's QTE) DB's main purpose is to only come in to invoke her switch skill time lock and hit the Elite with Tyr's weapon skill to shield break. With the initial 90 SP, DB doesn't need to worry about a lack of SP. Immediately switch/QTE into either CH or DPS. Remember that time lock can prolong the effects of impair.
B) or CH (normally or via QTE as thanks to your DPS/DB). CH's QTE and special attack can inflict a 50% impair. Her ultimate can inflict a 75% impair for 10s. CH's purpose is to build SP for herself and her team while also stalling long enough until the other valkyries can both be switched into. Make sure to inflict impair before switching.
C) When your DPS, GK in this case, is out, she will be dealing as much DMG as possible be it with her special meters and/or with her ultimate. But make sure all/most of her attacks are happening while the enemy is impaired.
The cycles are either DPS => DB => CH, DPS=> CH, or CH => DB => DPS. If for some reason you find yourself on DB for longer than necessary, just shield up and invoke Ultimate Evasion Time lock and then switch.

Other Weathers:
Here are links to the other 6 related guides.

You've reached to the end of this guide! Thanks for reading and best of luck to everyone in Dirac Sea!

Special Thanks to
1Dollar
iCarus
Gallepan

For providing insight and media footage.