The Infinite Abyss is a harsh and unwelcoming place. Even just the heat makes you bleed out. But why would anyone ever want to go there?
The answer is simple: Free Crystals.

A sparse and needed resource, especially in a game such as Honkai Impact 3rd. What do you need Crystals for?
Equipment and Character Cards.

What do you need good equipment and high rank valkyries for?
Late game content such as the Infinite Abyss.

You can see the problem there: It's an endless circle of needing crystals to be able to do content that gives crystals. But how does one break free of this circle? Free to Play friendly characters!

Every abyss floor consists of 2 waves of mobs + 1 boss enemy. Each wave consists of about 4-6 enemies and some of them have elite shields. The next wave spawns if every enemy of the last wave has been defeated, or after ~50 seconds. Every minute, the passive indirect bleeding damage increases, after ~5 minutes the damage even with healing/damage reduction equipment becomes unsustainable.

Since this is a guide for free to play captains, we need to use every advantage we can, type advantage being one of the most important ones. 30% flat damage multiplier is really good even for 4* gacha equipment, so we want to use that as much as possible. Due to a type inbalance in abyss, there are more PSY enemies(honkai beasts etc.) than MECH or BIO enemies. So for our main DPS we want to get a BIO type character. Due to her ease of farming, synergies and great base damage, I have chosen Gyakushinn Miko. 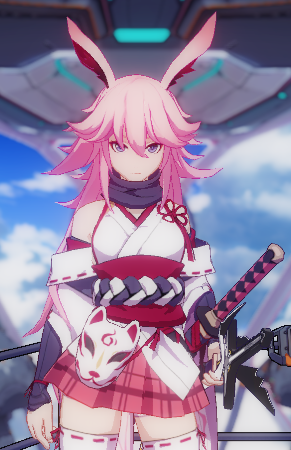 Miko is the awakened valkyrie of Crimson Impulse, and in my opinion the best Free to Play valkyrie. Her fragments can be farmed from Sakura Samsara, so getting her to S rank should not be a problem, but it is no requirement. Her most important mechanic are her Sakura Brands.

During her normal attack sequence, her 3rd and 5th basic attack apply Sakura Counter on enemies hit. When the Counter reaches 3, it is reset and applies one Sakura Brand. Her charged attack, Shunmetsu, consumes Sakura Brands to deal 400% of ATK DMG and knock enemies airborne. With her passive One Slash this can be increased to a total of 1000% of ATK = 10 basic attacks

Her QTE ability, Void Triplex, triggers upon knockup and unleashes 3 waves of slashes, each applying a Sakura Counter. This will be the main synergy in this lineup.

Your main goal when playing her should be to apply and trigger Sakura Brand as often as possible to maximize her damage. With her ultimate, Crimson Naraka, her basic attacks transform into her 5th basic attack, and applies 1 Sakura Counter. So the best course of action is to basic attack 2 times, then hold Attack button to use Shunmetsu, which applies the 3rd Sakura Counter to activate the Sakura Brand and instantly trigger it for massive damage. Note: the first attack triggers a full Sakura Brand, even though it isn't indicated, so start with a charged attack right away.

Important: Do not spam her basic attack while Crimson Naraka is active, consume the Sakura Brands with charged attack.

On average there are 10-12 enemies per floor, and you have about 4 minutes to clear them all. Especially in higher temperatures, this is not possible by attacking single enemies, especially since the other ones keep attacking you. In order to efficiently clear the floor we need to rely on Area of Effect damage. However, in Honkai Impact, there are rarely any attacks with great range or area, so we need to gather enemies on a small area and then use our AoE. To do this, there is a mechanic in HI3 called black holes. They suck all enemies within range onto one point until the duration is over. Currently there are 3 valkyries with long-lasting black holes:

For this lineup, I chose Ranger as the gatherer, even though her black hole has the shortest duration and the smallest range. The reason is that because it is an evasion skill, it has a really short cooldown, and most importantly no SP cost. Another advantage of Ranger is that she can equip Artemis Guardian, a weapon which has an AoE knockup + timelock as active to trigger Miko QTE.

The problem with Chariot is that she has to build up 50 SP to use ult, which is not that easy as a Bronya in Abyss, plus she can not trigger any synergies, due to her being immobilized. Celestial Hynm would be the best character, since her impair significantly increases Mikos damage, but this is a poor mans guide, so we can't afford her.

As the final valkyrie we prefer a PSY character to profit on type advantage bonus for enemies that Miko has disadvantage against. This can be either a support or DPS depending on what valkyries you have/prefer to play. Here are some options:

Since the black hole of Ranger has low cooldown and no SP cost, you can run straight at the first enemies and dodge to trigger the first black hole. Once all the enemies are gathered in place, you activate Artemis Guardian and instantly QTE Miko for massive damage and Sakura Brand triggers.

If her ultimate is not available, trigger all the Sakura Brands one after another. Once all Brands have been consumed, you can either switch back to Ranger for another black hole, or finish off the last enemies if there are only a few left. This can be done with either Miko herself or the third valkyrie, depending on the number and type of enemies, as well as your third valk.

If Mikos ultimate is available, use it right away as long as the black hole is still up. Do not consume the current Brands, as this will scatter the enemies again and deny an effective ultimate. It is important to always use One Slash to consume Brands during her ultimate, as she can consume multiple Brands in this time and keep all enemies in the air. If you did it correctly, it should be possible to consume Sakura Brands 6 times during the duration of her ultimate, for a total of 6000% ATK damage.

Since One Slash can critically strike, building a lot of crit chance and crit damage is highly recommended, however %CRIT is always better than the CRT stat.

For the weapon i recommend Lightning Soul, as it has a high CRT stat and gives on-hit lightning damage.

For stigmas again, high crit stats are key, but physical damage is also good. The best free to play stigma set is Rinaldo T+M and Atilla B. The 2-set effect of Rinaldo gives 15% crit chance, which is way better than any other 3* stigma. Atilla B is considered the strongest 3* damage stigma, as it gives 31% physical damage at 30 combo hits. Just for comparison, Plank M, a maxed out 4* stigma gives 51% physical damage bonus, however lets you take 72%!!! more damage.