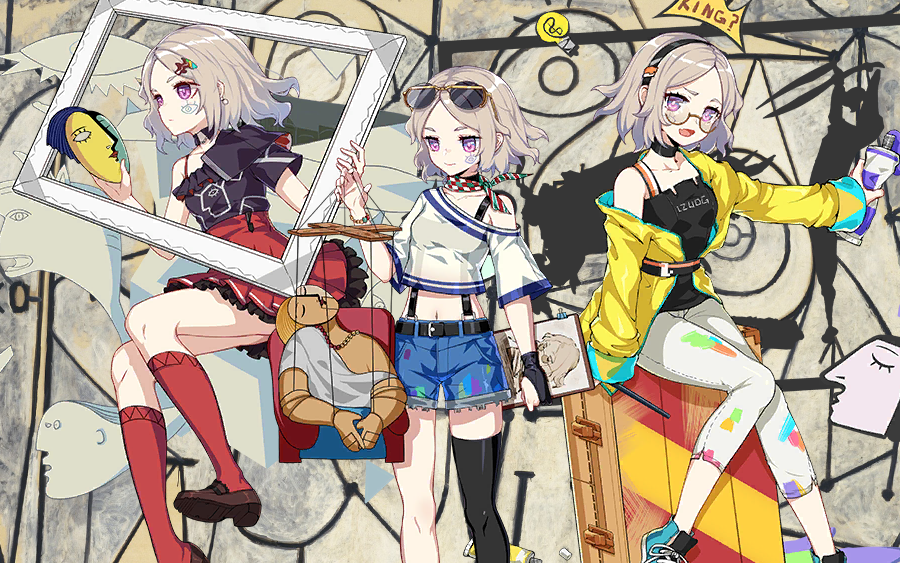 Picasso is a free to play stigmata set that buffs physical damage valks. Its (T) and (M) pieces can be acquired from the chronicals missions, or from the foundry. It's (B) piece can be obtained through special fragments from a box in the asterlite shop. These boxes cost  3 SS Imaginon. You are limited to 4 boxes a day. You will buy many boxes.

Picasso (T) paints the enemies red, each enemy it paints red gives you 1 red charge. Upon gaining 4 charges, you gain a buff to your physical damage. This is referred to as 'Zeal Mode'.
At its maximum rank it gives 32% physical damage for 6 seconds.

This stigma is worth maxing and is a great choice for your Physical T slot all on its own. Very solid free to play choice.

Picasso (M) paints the enemies yellow, and charges identically to Picasso (T). It will make your valk take less physical damage from hits and from damage over time. This buff can be useful in areas such as Q-Singularities and Dirac Sea. It is referred to as 'Shelter Mode'.
At its maximum rank, it makes the user take 25% less physical damage from hits and 40% less indirect damage for 6 seconds.

I do not recommend this stigma for individual use, in Hi3 your greatest defense is evasion and more damage.

Picasso (B) paints the enemies blue, charging the same as the other two, the user enters 'Impulse Mode'. Increasing her attack speed for the duration.
At maximum rank, this is a 20% attack speed buff for 6 seconds.

I do not recommend this stigma for individual use; attack speed is an awkward stat and it’s not worth the B slot alone. This stigma is also very time consuming and expensive to craft. If you're trying to play optimally, feel free to skip it.

Tl;Dr of the Single section. Picasso (T) is the only good one by itself. Picasso (B) is alright, but not worth the investment. (M) isn't very useful alone.

There are 3 potential combinations of Picasso and I'll cover each in this section. But first a short rundown of Picasso’s 2 set passive. Dye Impact, the primary mechanism for the paint rotation. Every 3 seconds, the paint changes to a different primary color. When 2 colors mix, they create a mixture based on the color wheel. The smears of paint Primary paint last 10 second. Red(T)+Yellow(M)=Orange(TM). Red(T)+Blue(B)=Purple(TB). Yellow(M)+Blue(B)=Green(MB). These mixes last for 4 seconds each and no other color can be applied or stacked on the enemy with a mixture on it. After a mixture ends, there will no longer be a paint applied, shortening the 10 second period if you need to chage the color, this is important for the 2 set bonuses.

NOTE: Orange paint is a special modifier. It isn't as simple as adding the percents together, it is calculated after all other modifiers, and increases that damage by 30%. This means it is better than just 30% physical damage and even increases the damage Blood Embrace(ELF) can do.

As far as I can tell, the mixtures do not allow the base stigmas to stack while they are active. This will be important in single target fights, but in a multi-target fight, the paints can easily stack up on the other enemies.

Orange (TM), This 2 set can be very powerful and easy to obtain through the chronicles stages. It slots into most physical valk gear easily aside from those with low attack rate. I'd like to leave an disclaimer, if you have an enemy marked with yellow paint at start of a fight, your DPS will suffer, you'll want to wait a few seconds to hit the enemy after they spawn to mark them red instead of yellow. Most of the time, you'll see an enemy get marked with yellow first. This is because the color switch timer starts with the stage. The few seonds it takes the enemy to spawn allows the color to change to yellow.
Purple (TB): Limited usefulness, but is a decent option with a damage M stigmata.
Green (MB): It sounds nice on paper, however, Yellow(M) is a defensive stigmata and Blue(B) gives attack speed, not very synergistic with a heal every 6 seconds, that’s less than 1% hp regen per second on average.

Each box represents a second of picasso's passive. The ones slashed through do not apply, but are still counted by the switch timer.

The first color an enemy is marked with tends to stick to them. This is beneficial if you mark them RED. However, it is detrimental if we start on yellow. If you start on yellow. To fix the color, apply orange paint. Let it expire, there should be no paint. After 2 seconds, you’ll be back on red paint. This will allow you to fix the cycle! Picasso has no color indicator so it may be difficult to color an enemy red. These also stay in phase, what that means, they tend to self-correct to this pattern on valks who proc the colors on time.

What do these phases mean for Damage?
Numberwise, the starting color will be up 50% of the time, this means its effect will be half the effect on average. For Red paint, this means you get a 16% physical damage on average. That is an average, and if timed well will be more effective. This is only a concern in a single target fight.
Our Secondary Paint will have an uptime of about 25% We don’t want our red paint to be secondary, or it will only give us a messily 8% bonus damage. This side effect is mitigated when attacking groups and not a single target, each monster stacks paint separately, and can allow us to have 100% uptime on both of our Stigmata buffs. The orange paint in this 2 set procs every 6 seconds for 4 seconds. This means it’s up 66% or 2/3s(4/6) of the time. Meaning we get a respectable, enemies take 20% physical damage buff on average. That combined with Picasso (T)'s single target 16% and 32% multitarget, means its better than just Picasso (T) on average.

Tl:Dr for 2-sets, TM is a good option if you don't have a powerful M Stigmata like Ekaterina M. M is generally a low-or-no damage slot. Picasso TM be a good damage option. TM can also handy-cap your damage in a single target fight if you get yellow paint stuck on the enemy. Picasso TM is available through Chronicals.

Picasso 3 set is Paint Jar, to add color to things. I'm not sure if it does anything, but it seems to work just like adding a 3rd color to a 2 set.
Each Full Cycle is 18 seconds long, and each mix lasts 4 seconds.

The top row leads into the bottom row, then it repeats. This pattern is self correcting.

The Picasso 3 set timetable is stable and only has a single phase. Which color you start on, determines your position in the phase. The pattern is self-correcting, so even if you miss an attack, you'll end up back in this pattern. The Upside to Picasso 3 set is that this resonance stabilizes your DPS. The downside is that it cuts your DPS drastically, it is better than Picasso TM with yellow paint stuck. If you have trouble with this, and are determined to use Picasso, the 3 set will fix it.
All 3 Primary Color effects are up 1/3 of the time. (T) is 11% physical damage on average, (B) is 6.5% attack speed on average. The damage reduction stats from (M) are 8.3% from hits and 13.3% indirect. The 2 set paints, Purple and Green are both useless, and orange paint is only a 6.5% more multiplier on average. To explain purple and green, they both proc one respectively every 18 seconds. 4% of your max HP every 18 seconds is the same as .2% life regen per second. and 120% attack every 18 seconds is 6% of your attack per second. This is Picasso 3 set on a single target. The 2 sets don’t get better, they only proc once every 6 seconds. However, Red and Orange do overlap frequently. In a short fight, Picasso 3 set will always hurt your damage.

Tl:Dr for Picasso 3 set, it's bad on single targets, there is more to be said for multitarget, but not a whole lot more. Don't bother to persue Picasso 3 set if you don't already have B, or if you are not a collector.

Singles.
Picasso T is the star of the set, it’s a stable 32% physical multiplier at max rank. It’s a very solid choice. Picasso B is 20% attack speed if you're into that sort of thing.
2 Sets.
Picasso TM is better than T if you don't have a better damage M to put in its place. Picasso TB is pretty fun for mobbing, The AoE is negligible, but it makes me feel good that I bought Picasso B after making this Gear Breakdown. 2 sets can be unrulily in a single target fight, don't smear the yellow paint first, you'll lose most of your damage in the TM set and TB set. Go to town in multitarget fights, you get full stacks easily.
3 Set.
Picasso 3 Set is stabilized, you will travel across the rainbow with it, you just won’t be doing damage in single target fights. In multitarget fights, its worse than Picasso TM and TB and another damage stig. But I catch myself using Picasso 3 sometimes.
It's important to note, in this guide I listed average effects. The effect while its active is full strength. If you cast an ultimate when Red Paint overlaps with Orange paint, the result with be improved.

There are stigmata sets that have similar base effects to Picasso. Seele Vollerei as well as the Gift Set. These sets benifit from having no moving parts, but their set effects are less powerful and thier requirements don't fit every valk very well. They are are something to keep in mind though.