Hey, Captains! Today we are going to be taking a look at the new Evangelion collab stigmata: Children Set. introduced in v4.5 alongside Asuka and Longnigus, the Children set is a Physical DPS set that revolves around the host landing Charged ATKs. In this guide, we will review the set's functions, which valkyries will enjoy the stigmatas the most, and how it fares in today's meta.

NOTE: THIS SET IS ONLY AVAILABLE in V4.5 DUE TO A LICENSING AGREEMENT. AN ALTERNATIVE ARTWORK SET THAT CAN PAIR WITH THE CHILDREN SET WILL BE RELEASED IN THE FUTURE. 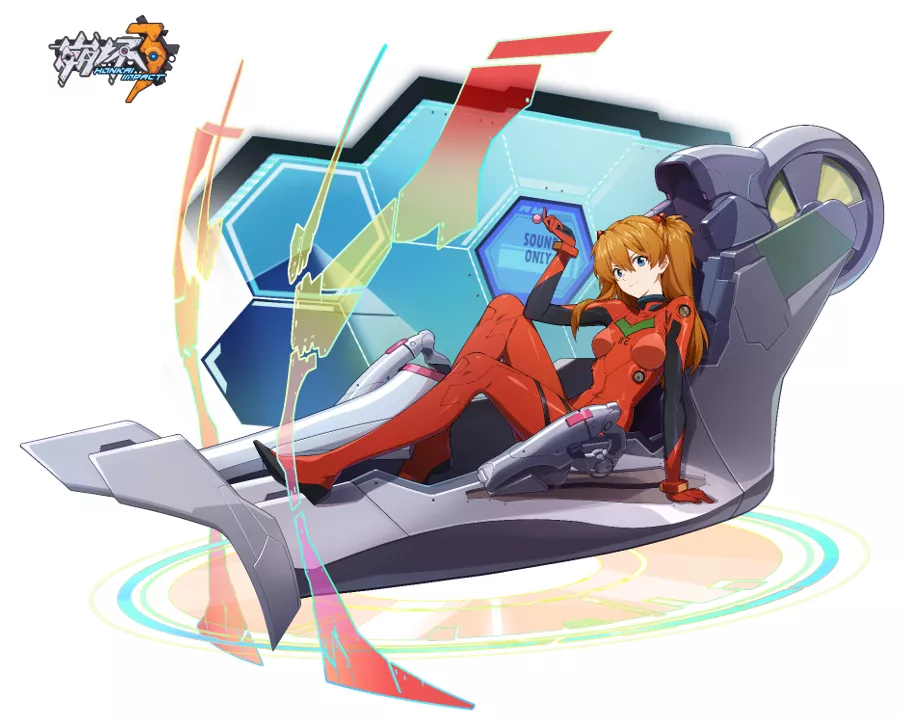 Hearts Together: Host deals 20.0% bonus Physical DMG and after landing a Charged ATK, she deals 30.0% bonus Crit DMG for 4s (can be stacked). 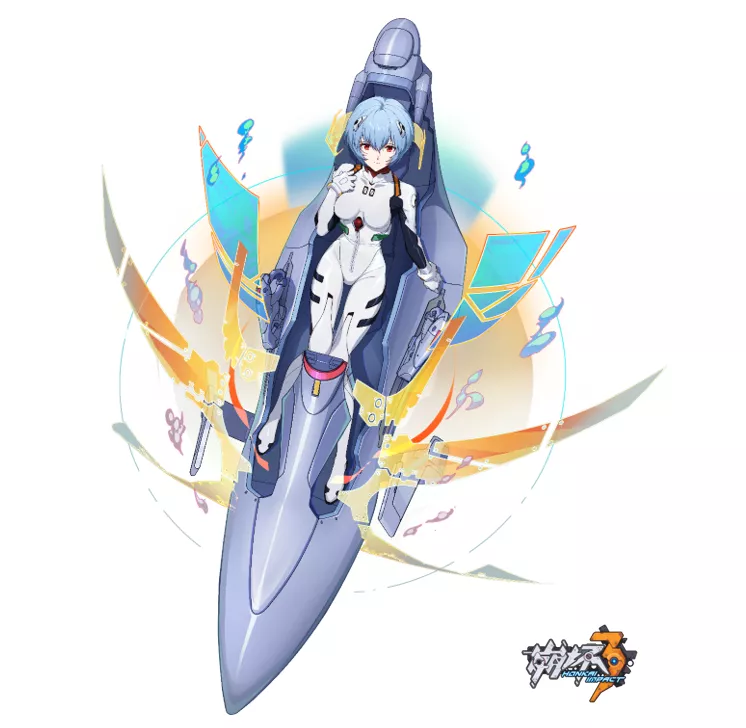 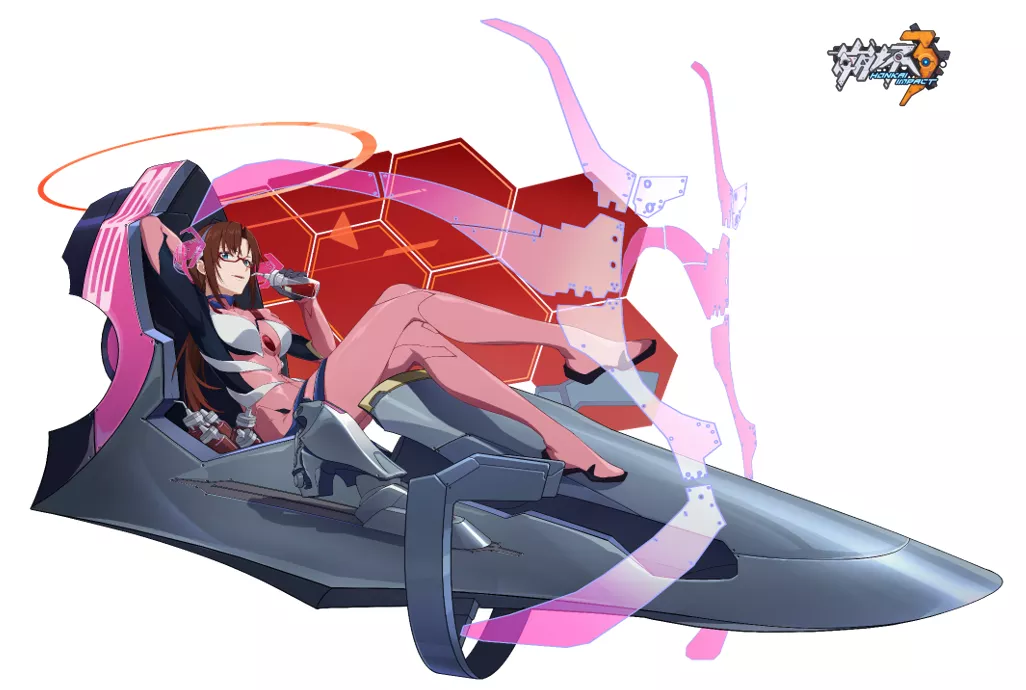 2-pc bonus: Combat Sync
When Charged ATKs hit, if there is no more than 1 enemy within 8m, host deals 45.0% bonus Total Damage for 6s. 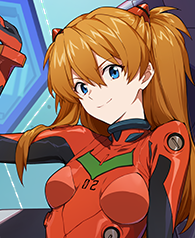 Asuka (T): Provides Physical DMG and Crit DMG bonuses. Asuka T comes with a passive bonus of 20% Physical DMG for the host, which isn't too shabby. Also, if the host lands a Charged ATK, she gains a huge 30% Crit DMG buff for a short 4s. The second buff narrows down a lot of Valkyries who can utilize Asuka T because it only buffs after landing the Charged ATK, excluding the Charged ATK itself. 4s isn't very long either but 30% Crit DMG bonus is definitely very powerful. 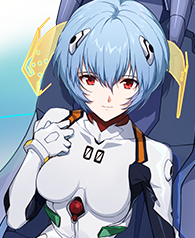 Rei (M): Provides TDM and Crit DMG bonuses. Rei M provides a good 20% TDM bonus passive. While it's good, it's not the first M stig to provide this amount of TDM bonus. The second effect encourages the host to fight solo battles. Meaning when facing single enemies, typically bosses, the host gains another passive buff of 20% Crit DMG. The Crit DMG is a good addition and this makes the M piece very versatile without too many restrictions. 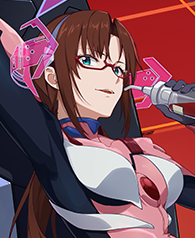 Mari (B): Provides Crit Rate and Physical DMG bonuses. Mari B comes with a small Crit Rate bonus of 15%. Its secondary effect is designed for (preferably) solo fights. Without changing target and attacking 5 times, the host can build up a small 15% Physical DMG bonus. The B piece is honestly the lackluster of the three pieces. The buffs it provides are very little and require build up also. 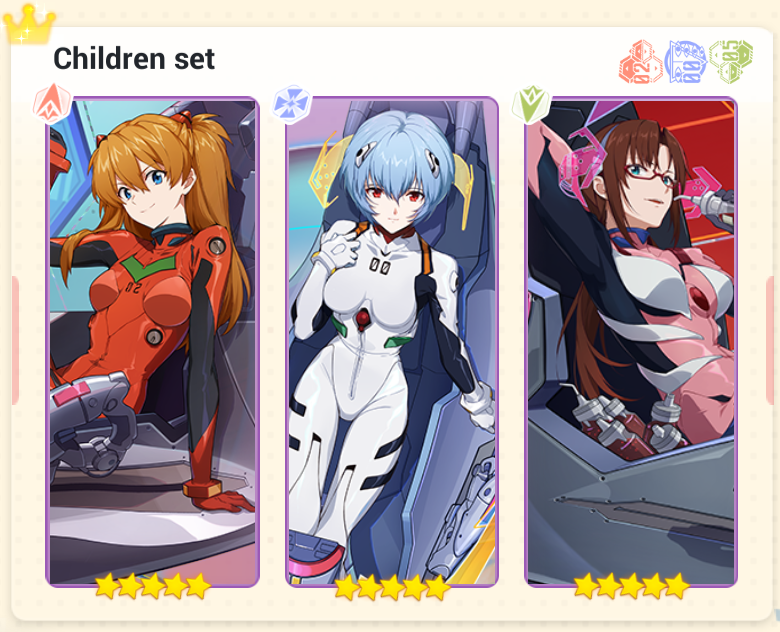 2-pc bonus: Provides TDM bonus after Charged ATK hits isolated enemy. Combat Sync is designed mainly for solo fights with its “8m isolation” requirement. When the host lands a Charged ATK, they gain a whopping 45 TDM buff for 6 short seconds. During these 6s, it's recommended that the host makes the most of this large buff and dish out the largest source of damage.

3-pc bonus: Deals 200% of ATK in Physical DMG (after landing Charged ATK) and also provides Asuka 40% Physical DMG Buff (Charged ATKs only). At the time of writing this guide, the 3-pc effect's translated wording is rather misleading. Battle-tested makes it so after the host lands a Charged ATK, an additional Physical DMG (200% of host's ATK stat) will be hit onto the enemy (cCD 6s) as well.
In addition to this, if the host also gains a huge 40% Physical DMG buff passive to her Charged ATKs if she is Asuka. And to top it off, the CD decreases from 6s to 3s if in enhanced mode.

This large buff for Asuka justifies equipping the weak B piece.

Because the Children set is designed for Asuka, we will be comparing the set with the other Physical Support stigmata combinations that Asuka can use. 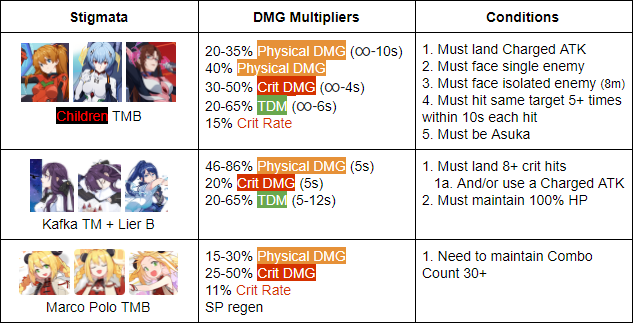 To see how well each set works on Asuka, Asuka was tested with each set while facing a single enemy.

There were 4 team damage tests, each consisting
Test Conditions: 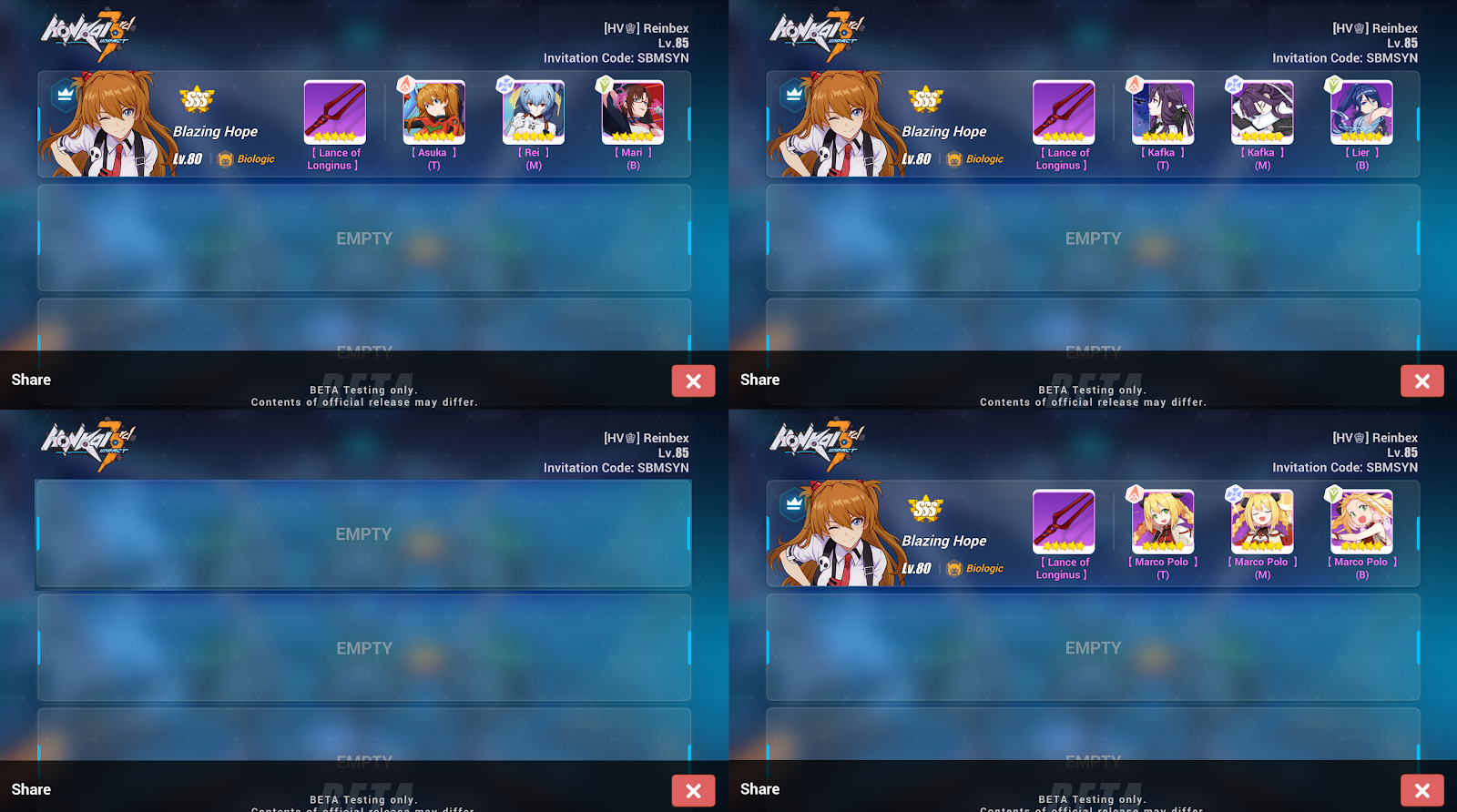 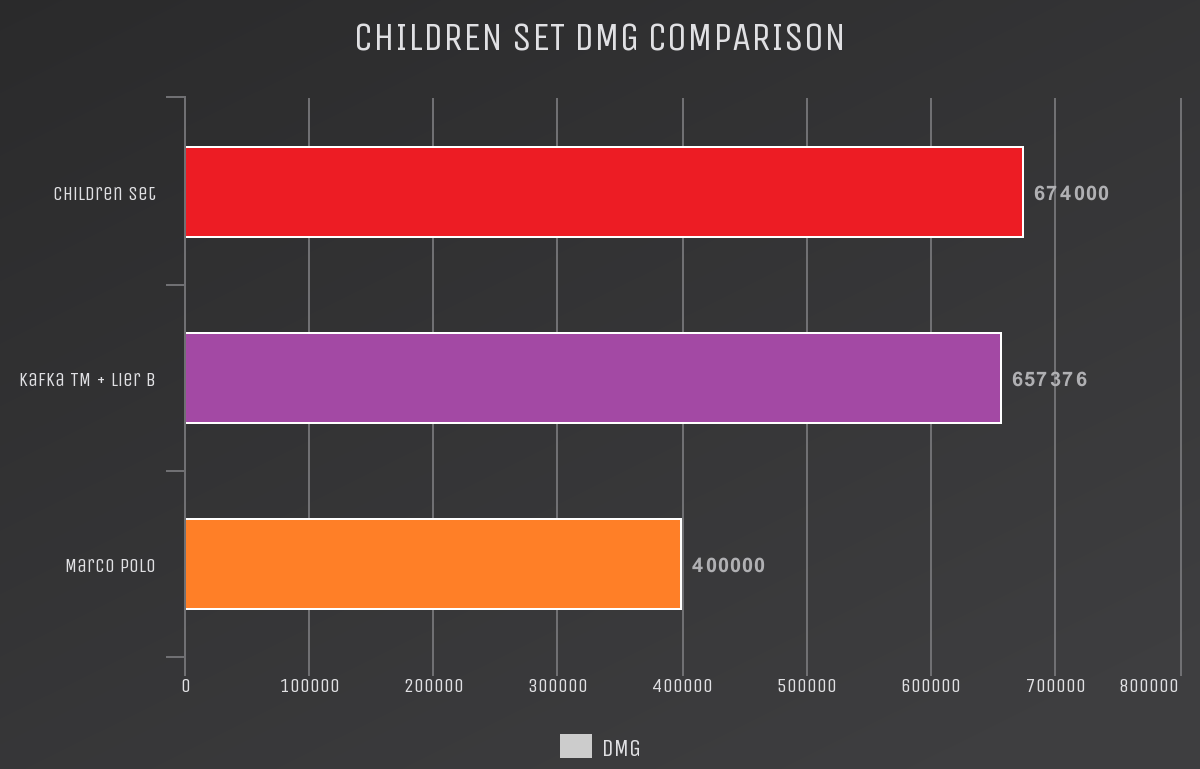 Test Results
Based on the test results, it can be observed that the Children set is the best set for Asuka. The Children set outperforms Kafka TM + Lier B by 2%. However, keep in mind that Kafka has a 20s CD for its 2pc effect, so Asuka's DMG output won't be too consistent if you plan on using your Charged ATKs often. As for the Marco Polo set, the Children's set outscores it by a whopping 68.5%! Using f2p sets can only do so much for Asuka.

Recommended For and Closing Thoughts 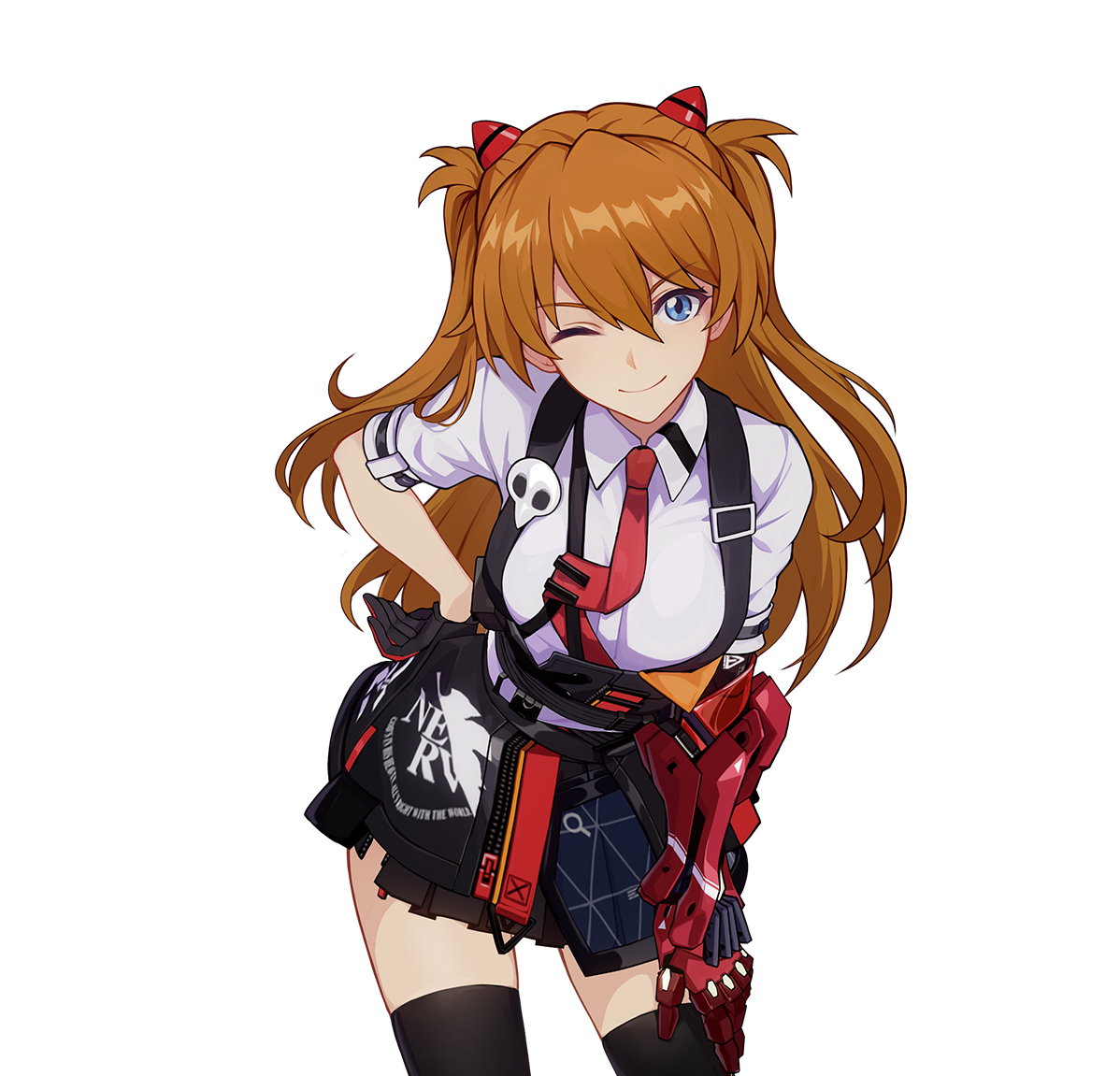 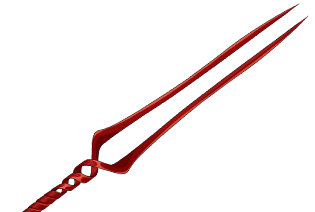 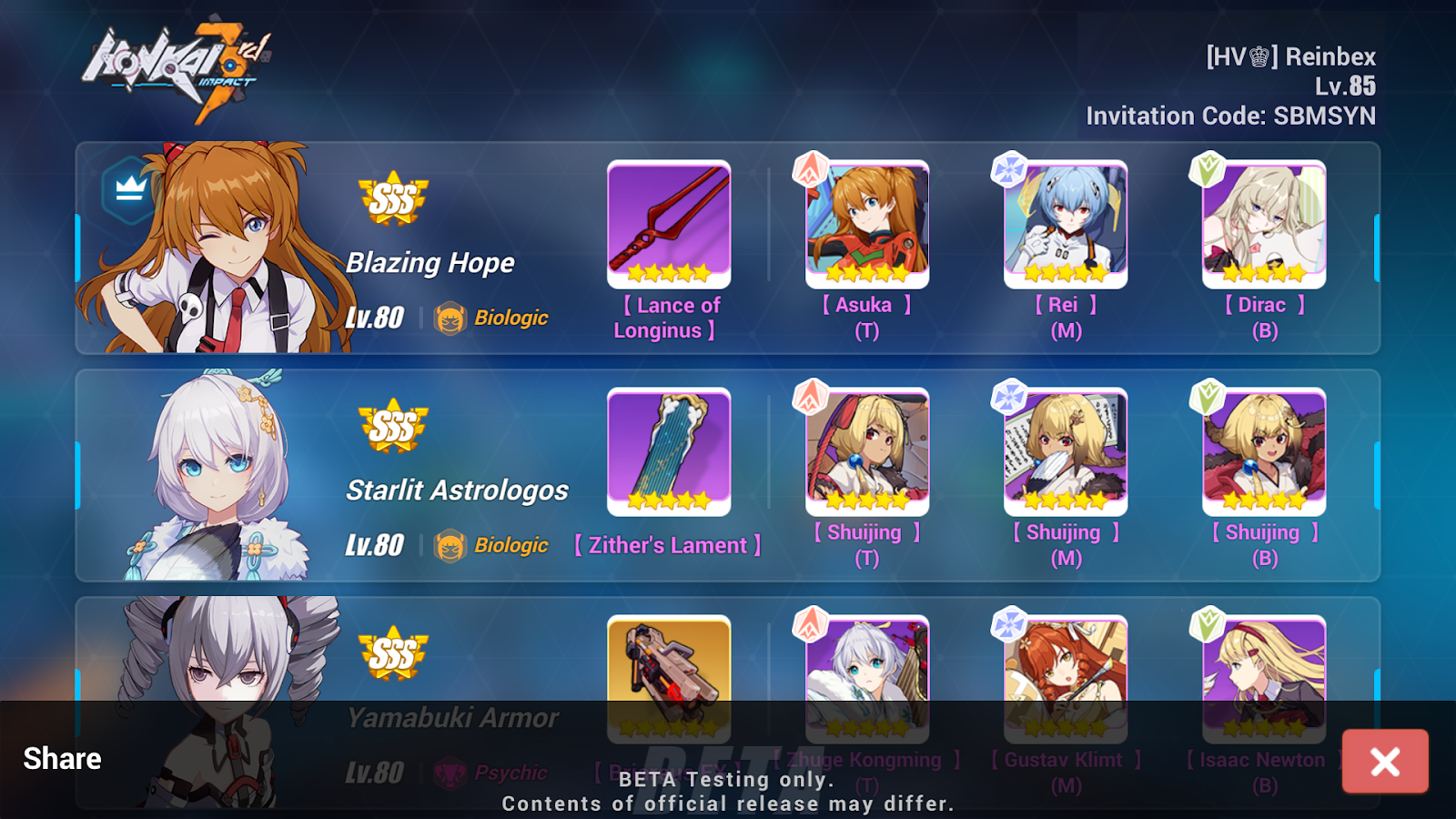 In the video, Asuka prioritizes dodging for SP and extending time fracture as she whittles down DXY's shield. At the same time, her teammates stall for time as well as SA builds up her own SP. When DXY's shield is about down, DK sets up Bri-EX's ult and SA proceeds to QTE and Ult. All while the buffs and debuffs are being set up, Asuka QTEs in and Ults, proceeded by landing a Charged ATK and killing off DXY quickly before she gets up.

In conclusion, Children is a strong Physical type stigmata set that requires the host, particularly Asuka, to land a Charged ATK first before dealing their big sources of DMG. Its buffs are not too bad but the unique playstyle it takes to fully utilize even two of its pieces narrows down to only a few valkyries that can use it. If you wish for your Asuka to be powerful, it's recommended that you get your hands on this set. However, keep in mind that while this set is only available in v4.5, an alternative art variant of the stigmata set will be released in the later future. 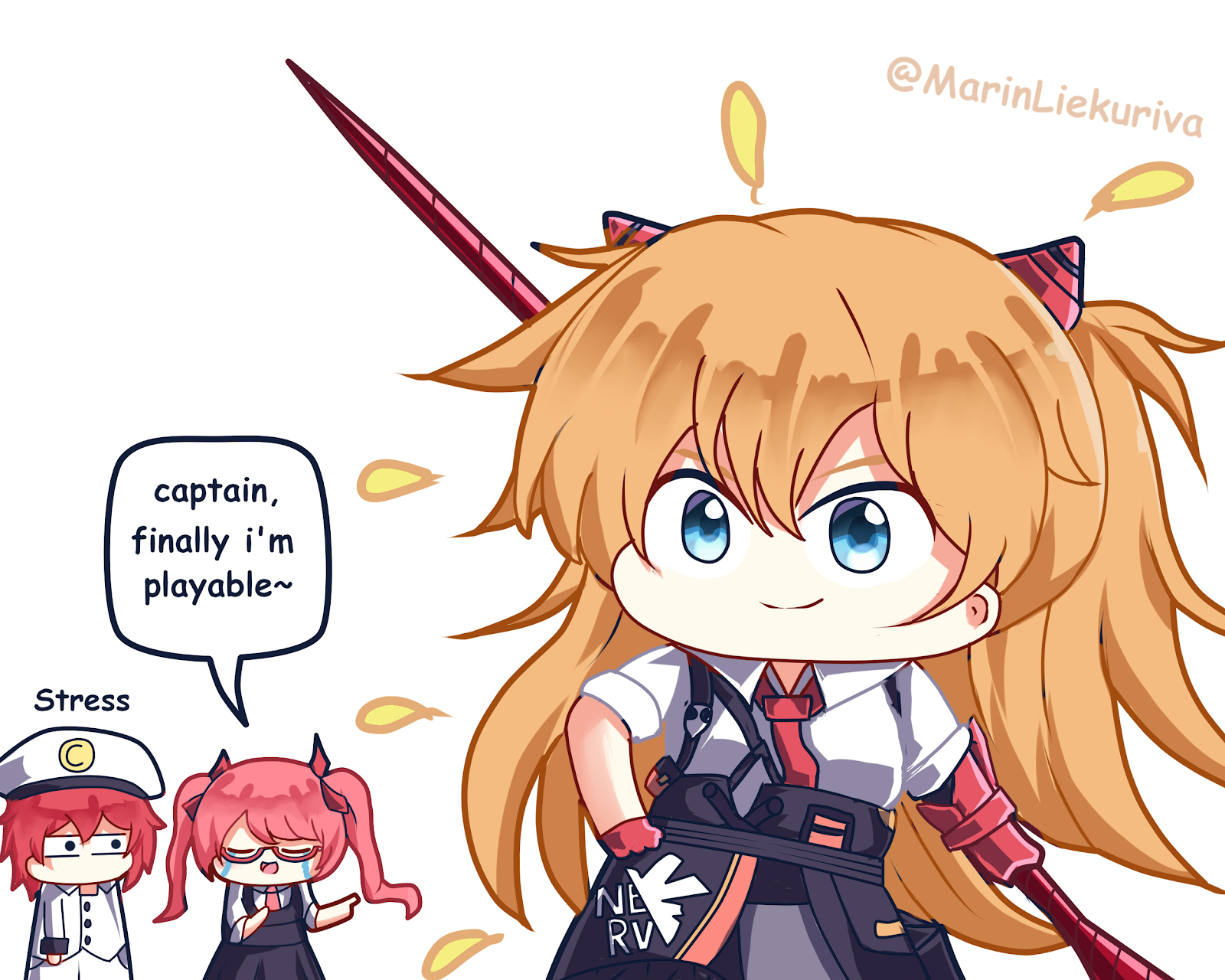