Hello, captain! Welcome to Version 4.5 Patch Overview by Kopenych & A.E.N.! The long-awaited collaboration of Honkai Impact 3rd x EVANGELION finally arrives on Global, so we can shed some light on upcoming update details! Let's check all the news out together! WARNING: All information is based on BETA 4.5.

We also need to note that version 4.5 update contains an exclusive collaboration between two titles, so we have one really important thing to tell you:

As per agreement with the licensor, Asuka, collab equipment and outfits will NEVER be available again after the collab ends.

Don't wait too long if you wish to grab this version exclusives, they all will be available only once! Soooo, let's start! 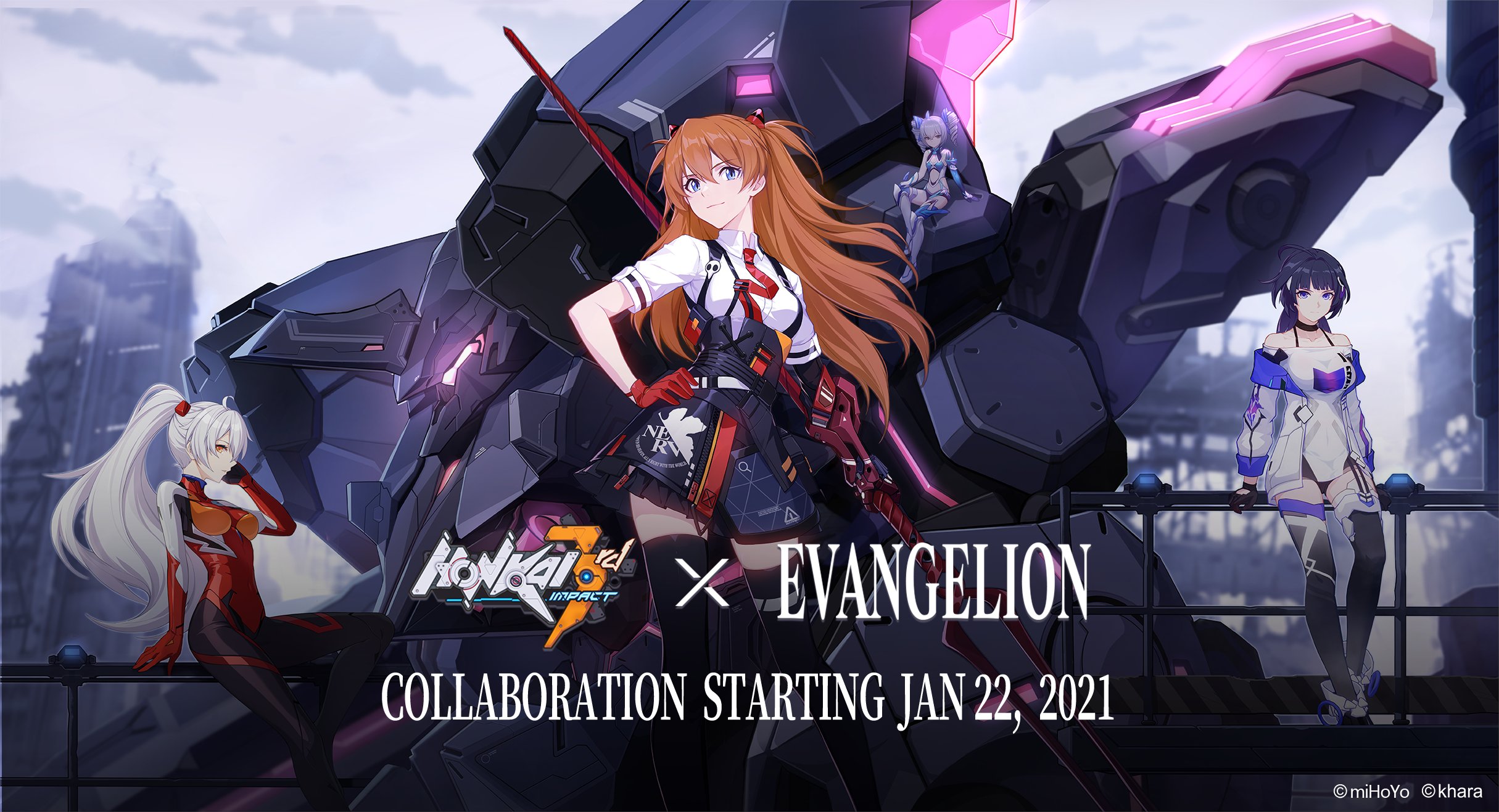 The awakened otherworld traveler. The invading unidentified creature. The berserk colossal mech. Struggle, entanglement, survival, trust… The incessant notes sing the movement of the new century.The alarm heralded a new crisis and the Angels are here to destroy!

The long-awaited collaboration is finally here to slightly change the usual environment - look at this gorgeous Captain's brid-... mecha hangar? New version will transform the UI in EVANGELION-styled theme, and the background music will change as well! 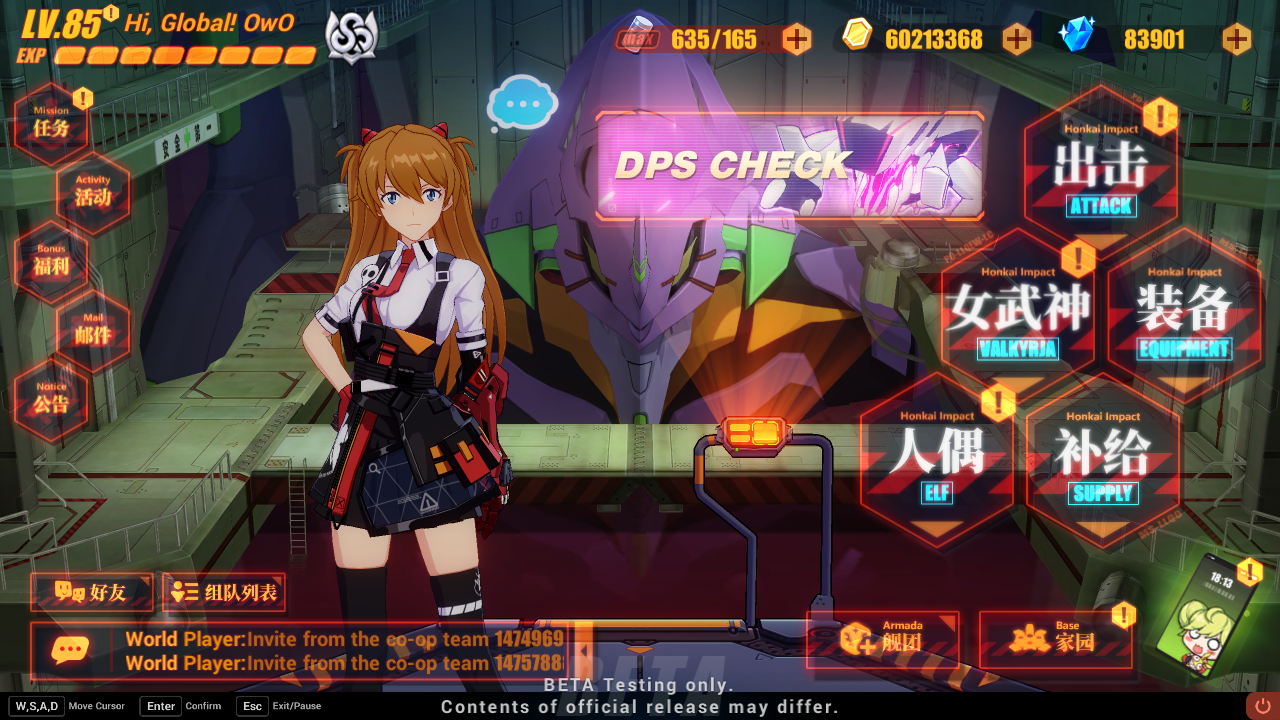 We also need to underline some extremely important things about version 4.5 for you to know, so we strictly recommend to keep them in mind:

Collab SP Valkyrie strikes! The girl from another world conquers obstacles with her crimson lance and ordeals with absolute confidence! Asuka's SP battlesuit “Blazing Hope” debuts! She is a BIO melee Physical DMG dealer battlesuit that can deal massive damage with Charged attacks by building up Field Energy. Her Ultimate boosts her damage output and its Finisher summons a gigantic lance to strike down at enemies for lethal AOE Physical damage! Sweep the battlefield with the crimson lance and impale enemies with Asuka's absolute power!

How to get Blazing Hope battlesuit fragments:

Asuka is a new and unique case for Honkai Impact 3, so you need to pay attention to her gears as collab equipment will be available for a limited time if you are aiming to get Blazing Hope. However, don't worry if you skip anything! Even if you don't manage to get her signature stigma set, it is promised to introduce a new one when version 4.5 ends to provide a replacement that will be interchangeable and not collab-related. Her signature weapon Lance of Longinus, on the contrary, won't get any sort of an alternative, so you can grab it if you want. Lance of Longinus looks stylish as hell anyway, don't you think so?
Don't forget to check all the options with other gears if you want to find an alternative! Biggest thanks to Marisa Honkai and other Captains for the translation of this table. 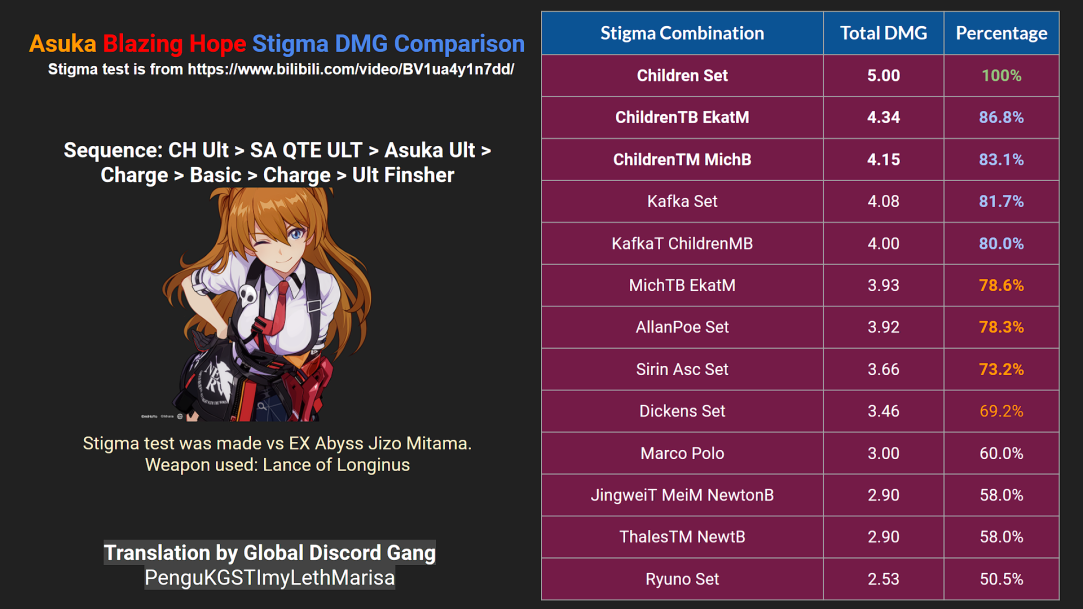 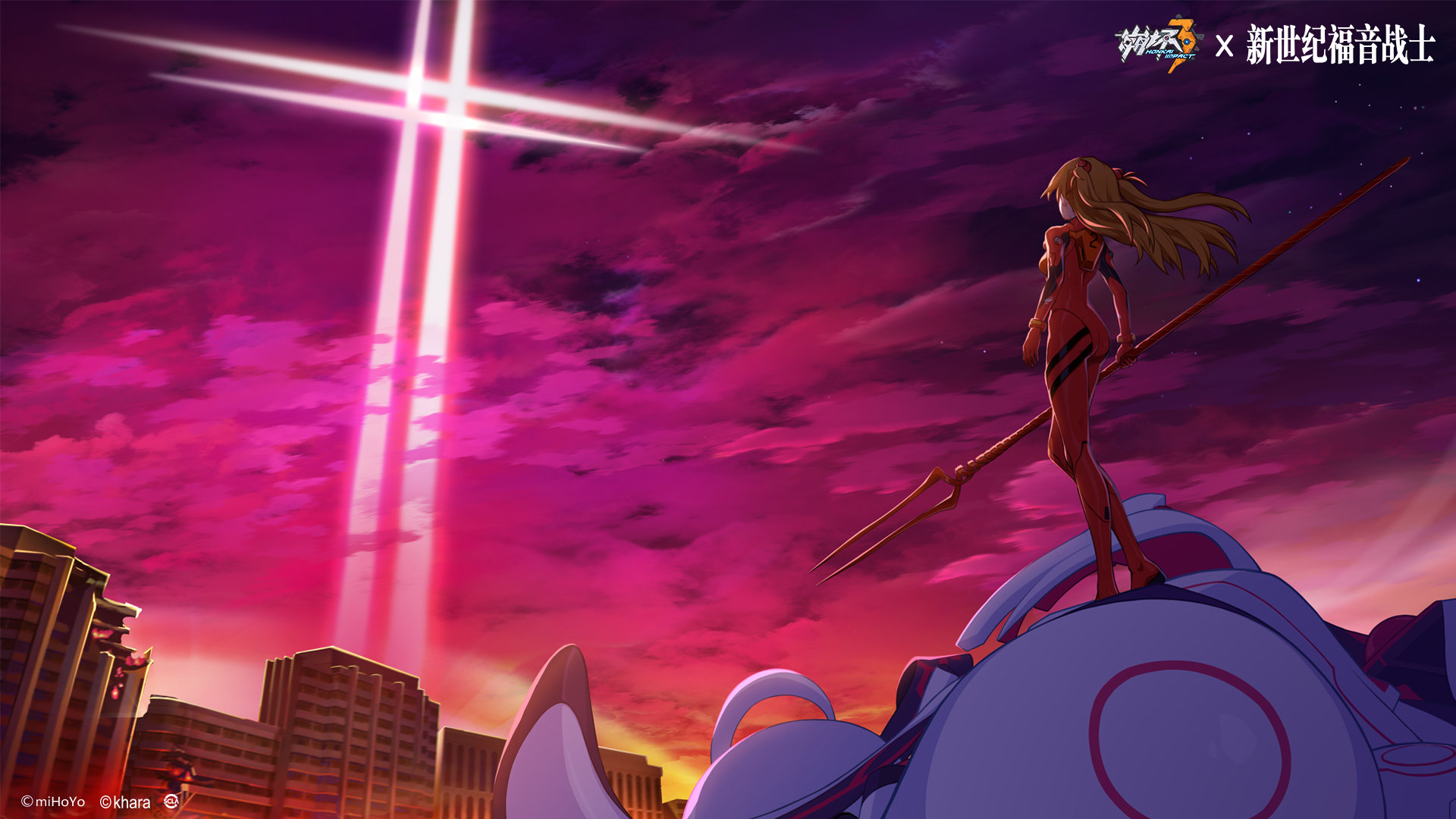 The awakened otherworld traveler. The hostile unidentified creature. The berserk colossal mech. The wheels began turning when a girl named Mei set foot in Nagazora. Apostles bearing the name of Angels are approaching. Can the girls engulfed by the war stay true to their hearts? The collab's main event “New Century” unfolds! 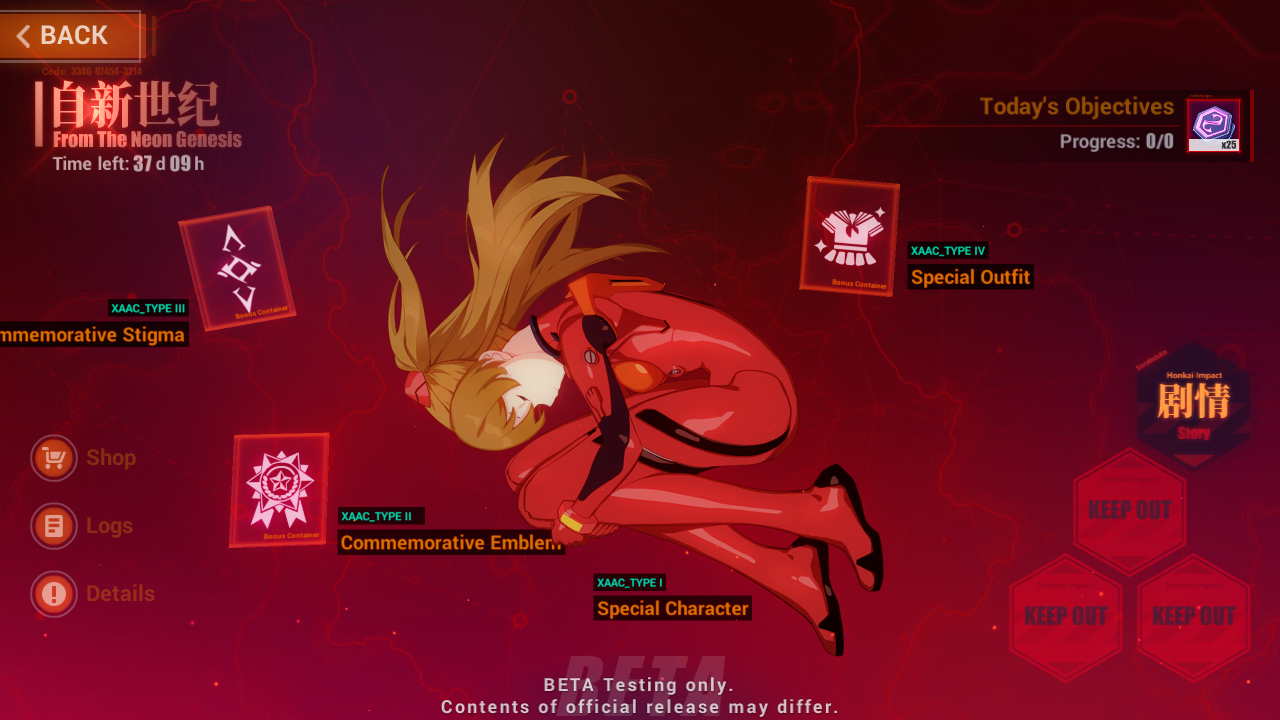 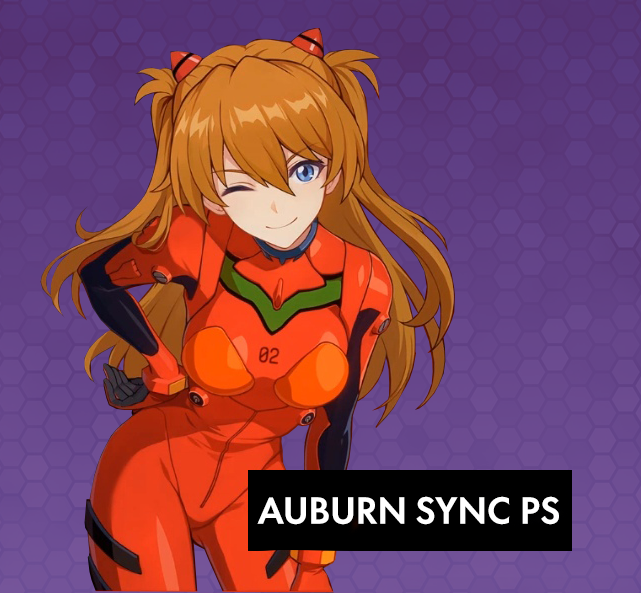 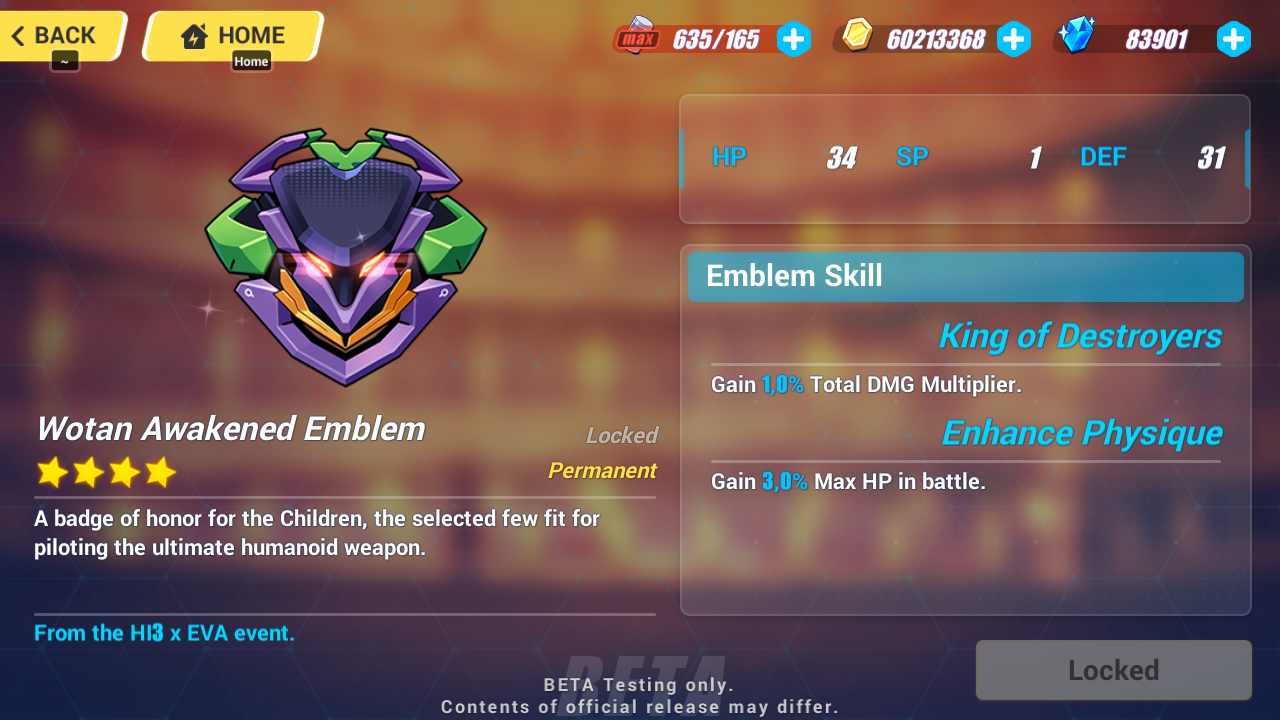 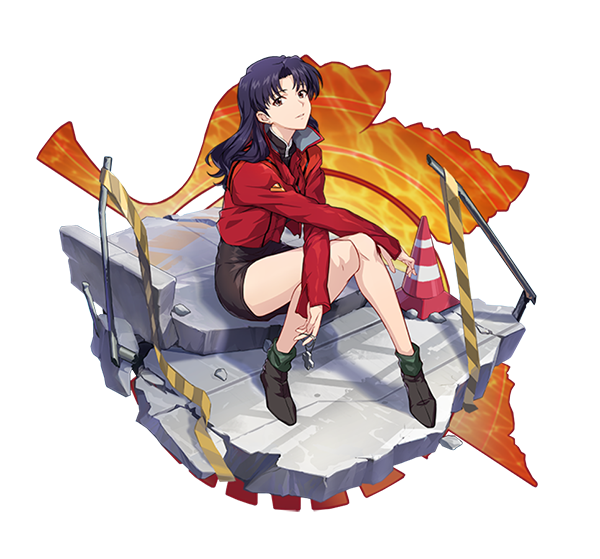 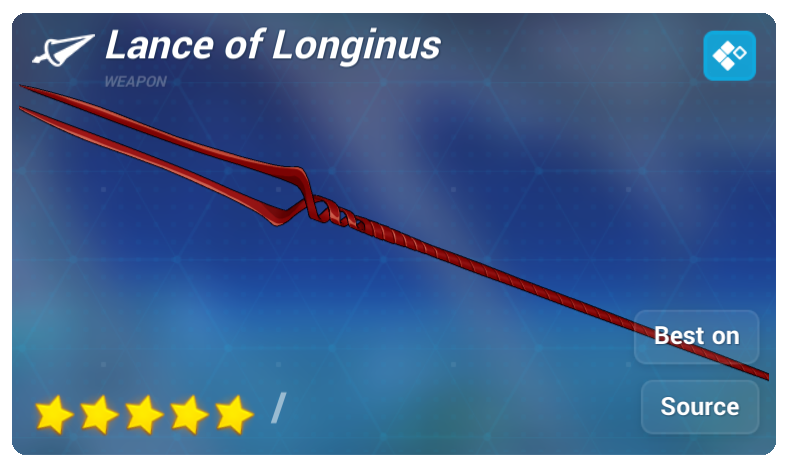 Weapon skill: 0 SP
Cooldown: 25 sec
Unleash a thrust dealing 50% ATK of Physical DMG. Against enemies not in invincibility or Iron Body, this attack triggers a Throw to control enemies and deal 90% + 1400% ATK of Physical DMG. During certain enemy moves and when the active button is flashing, a Throw counter can be performed unconditionally, controlling enemies and dealing 20% + 800% ATK of Physical DMG (does not reset CD). The last hit of the Throw deals 50% bonus damage to shields.
- [Asuka Only] Charged attack, "Matching Moment" and Ultimate finisher deal 15% bonus Total DMG and have 15% bonus Crit Rate. 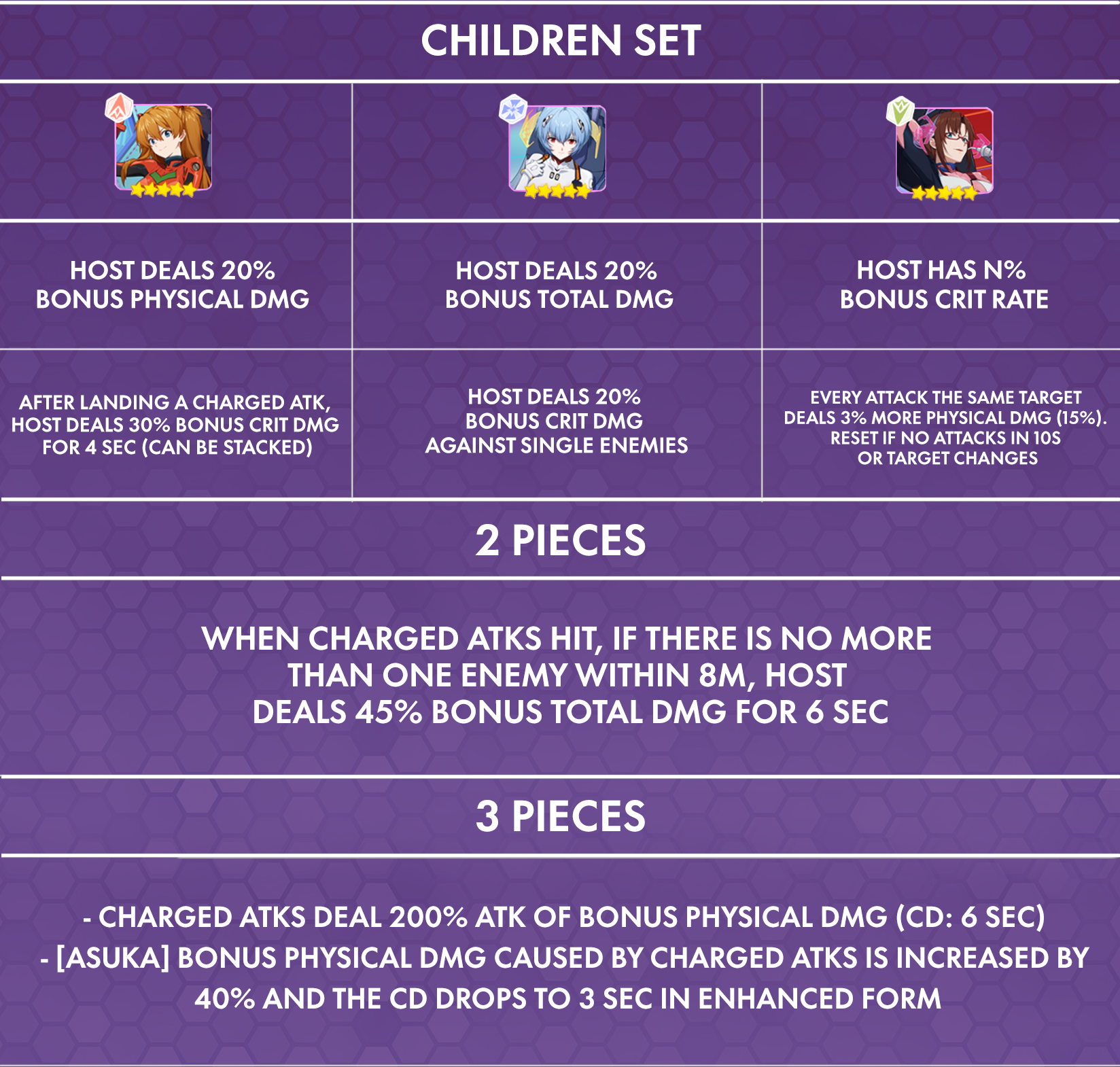 *The translation of 3 piece bonus seems to be written with a mistake on BETA, so we changed it to a better version. Beta content is subject to change, please refer to descriptions in the actual update. 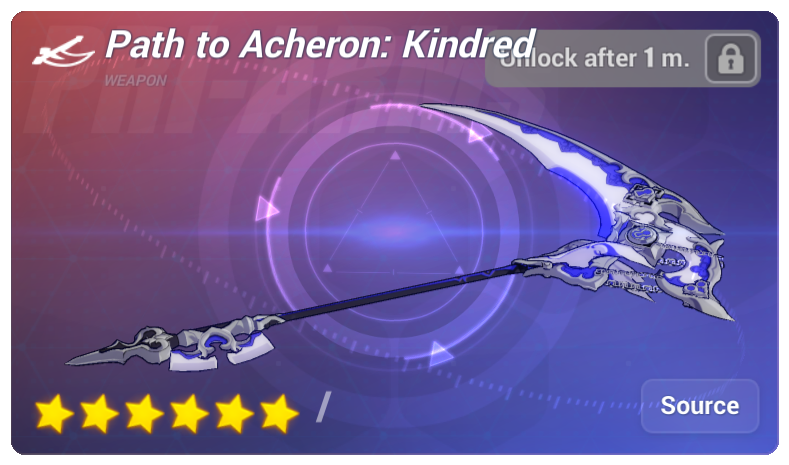 Charged ATKs create petals that transform into 5 spikes around the target hit, each dealing 100% ATK of AOE Physical DMG (CD: 7 sec). Can be reset by Ultimate. [Stygian Nymph only] 7 spikes are created instead. 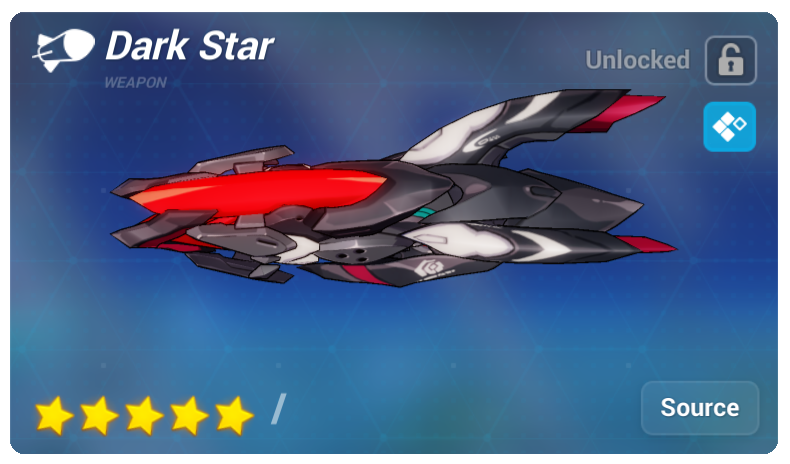 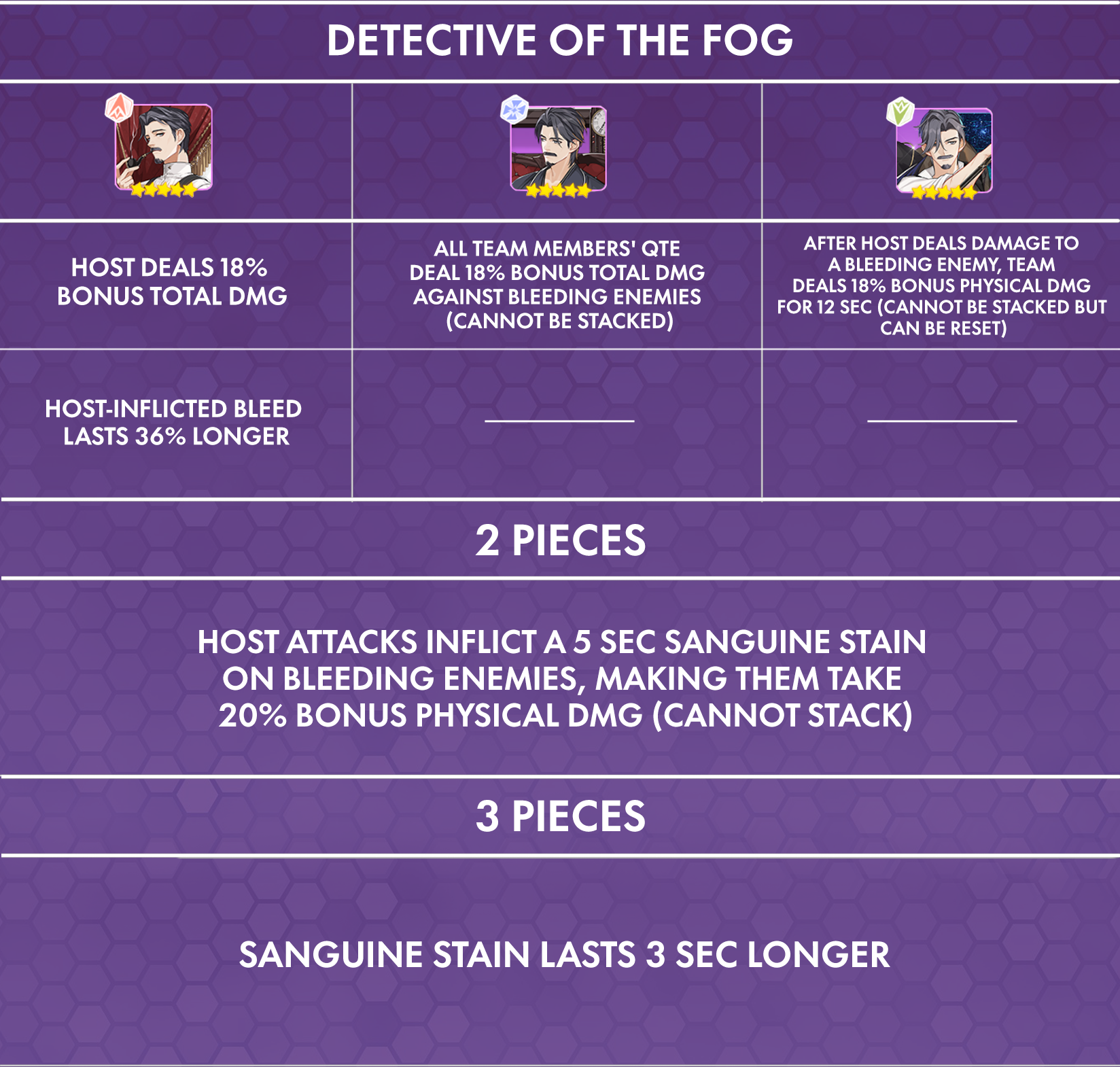 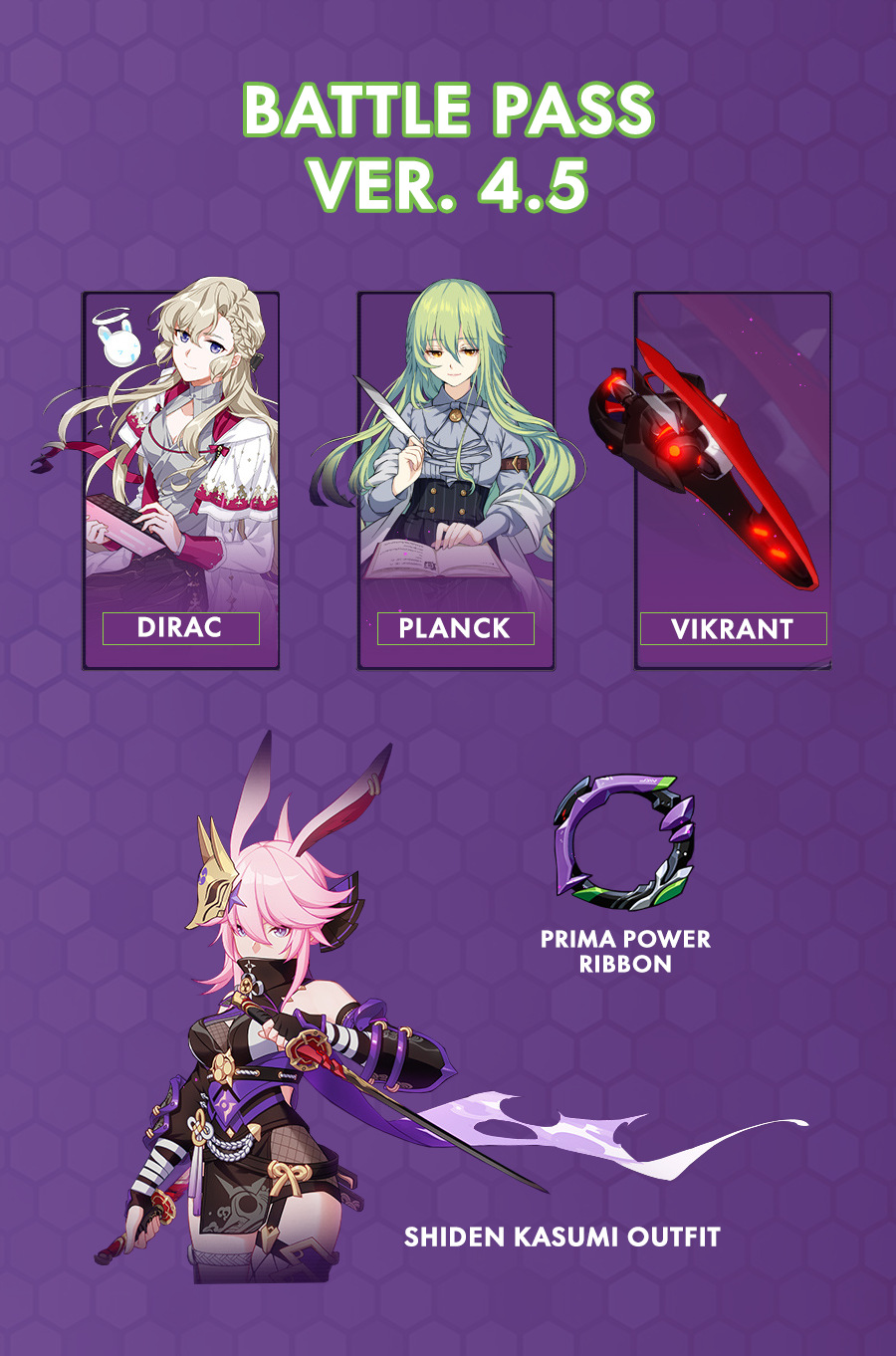 This time Battle Pass also contains a special version of the outfit for Yae Sakura “Darkbolt Jonin” - Shiden Kasumi.
WARNING: YELLOW LUCION expires at the end of this patch. Make sure to use it before it turns into 15 Torus each!

This time this section includes a wide range of time-limited collaboration outfits, don't miss this rare opportunity to grab something at your liking! Let's take a look at GIF showcases of all upcoming outfits for version 4.5!

Source: Outfit Supply
IMPORTANT: You can choose one out of the two versions of this outfit in supply. Guaranteed drop max at 10 pulls/9600 crystal. After you get the first outfit, the second one will be available for 1800 crystal in the shop. 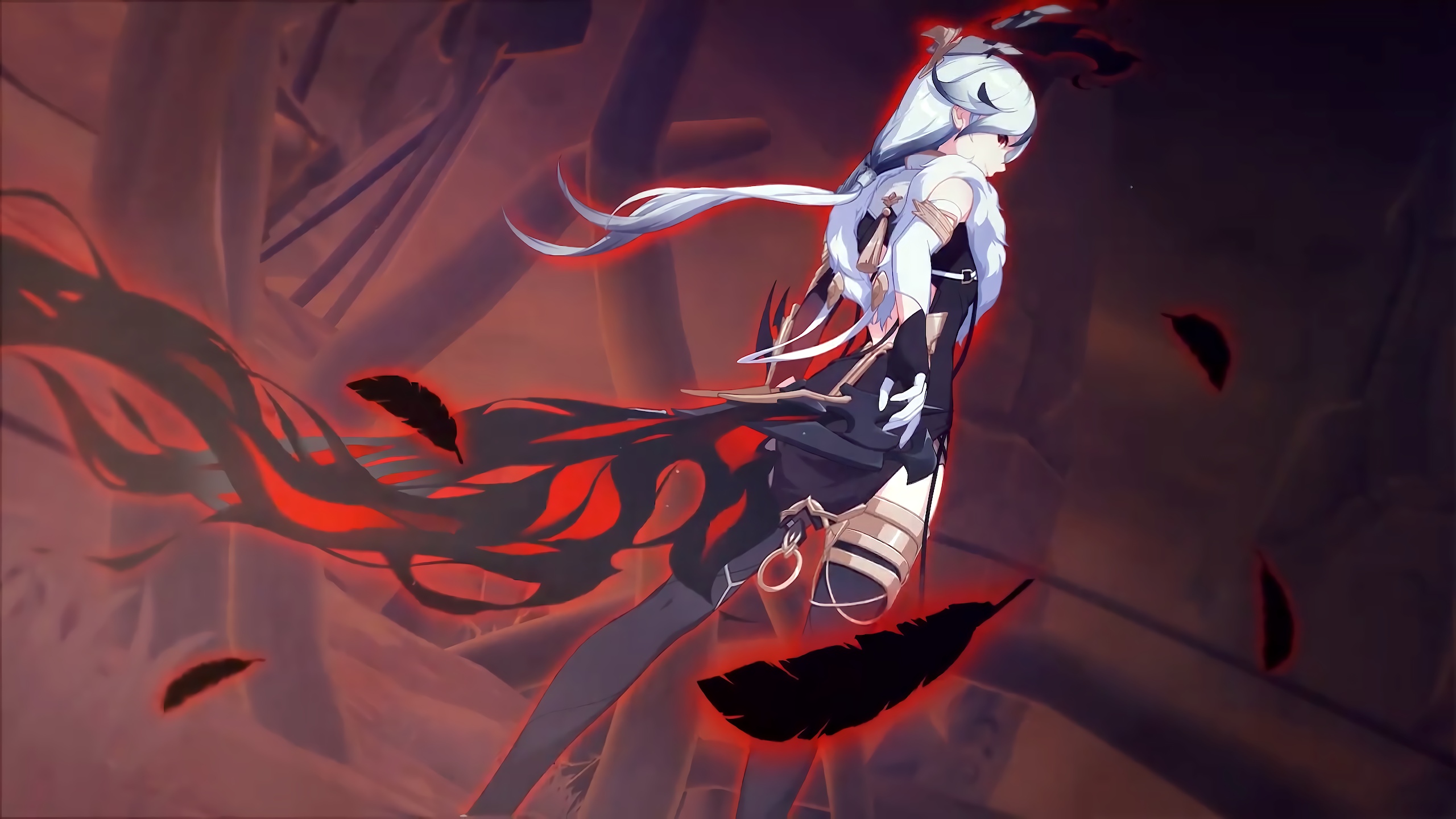 Fear, wrath, despair... What will their choices be once the truth is no longer a secret?
Story Chapter 22 “Me and Myself” is coming soon! Participate in the limited-time event to obtain Rebel Blades optional stigmata box, 300 Crystals, and many other rewards! You can choose any piece of Rebel Blades set if you missed something or obtain Asterite x10 000 instead. 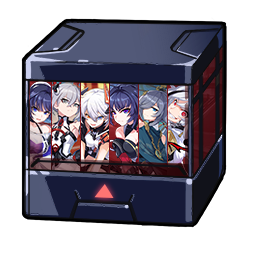 All Hard and Supreme Story stages that do not support Expeditions have been deleted from the Story system, and the others are moved and reorganized by a new system. Don't panic: all uncompleted challenge objective Crystals, first-time clearing materials and first-time clearing Stamina will be reissued.

The event that rewards Bounty Silvers for completing Bounty Tasks to purchase Ghosts in Bounty Shop is prolonged to version 4.5.
PRI-ARM Path to Acheron: Kindred can now be forged. 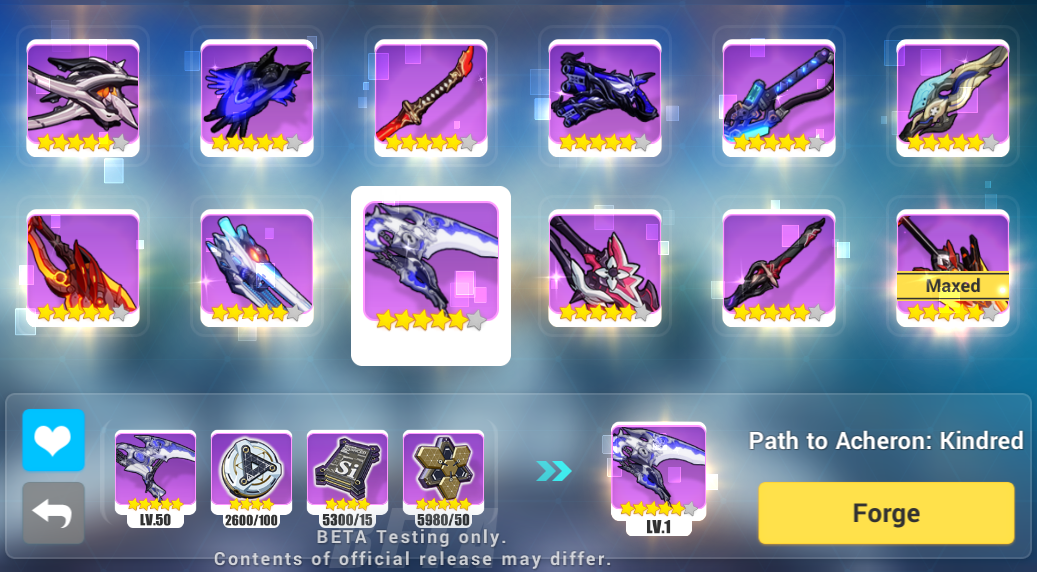 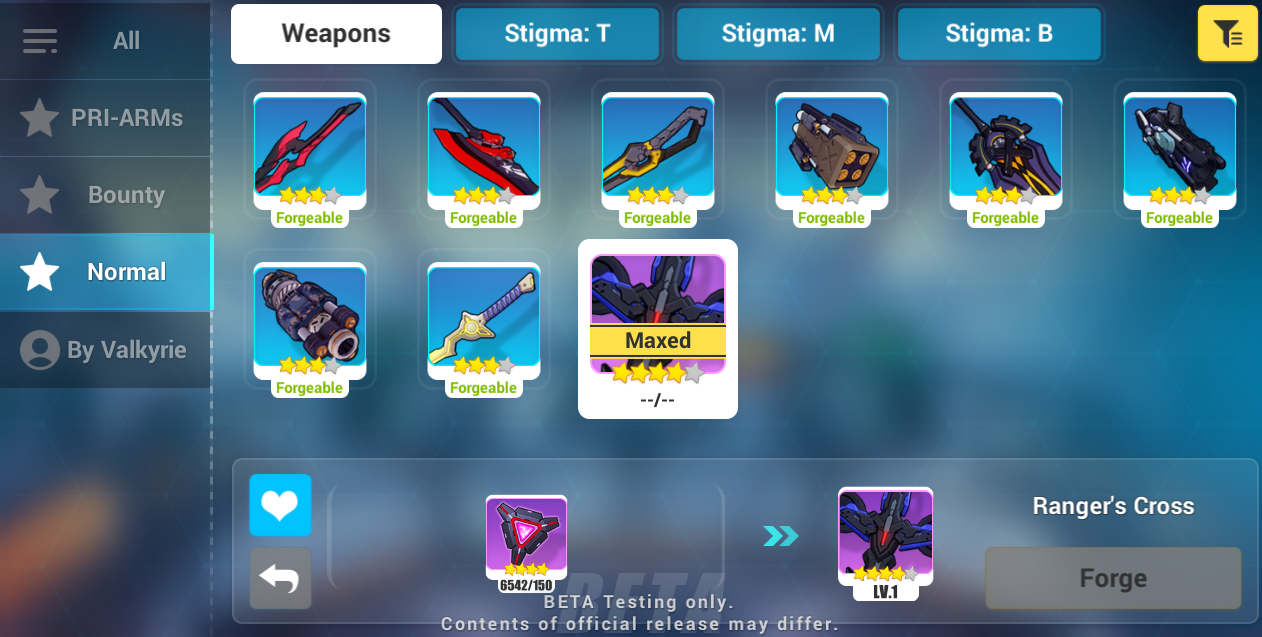 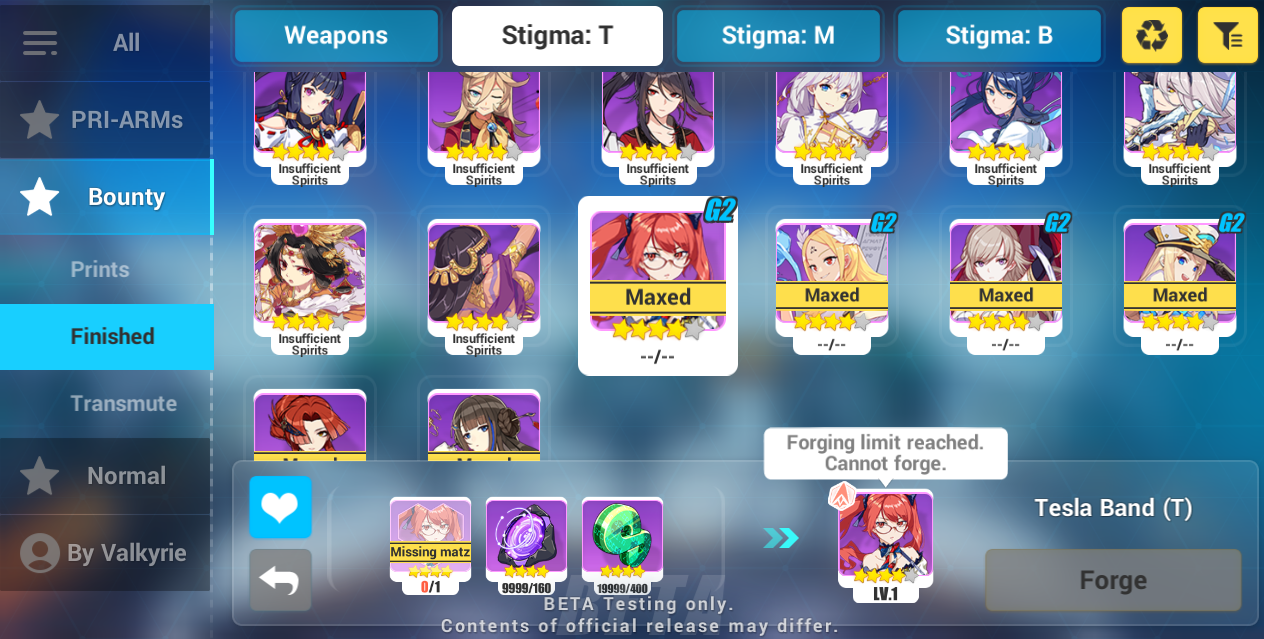 Adjusted the forging limit of stigma Theresa: Origins to 3 pieces. 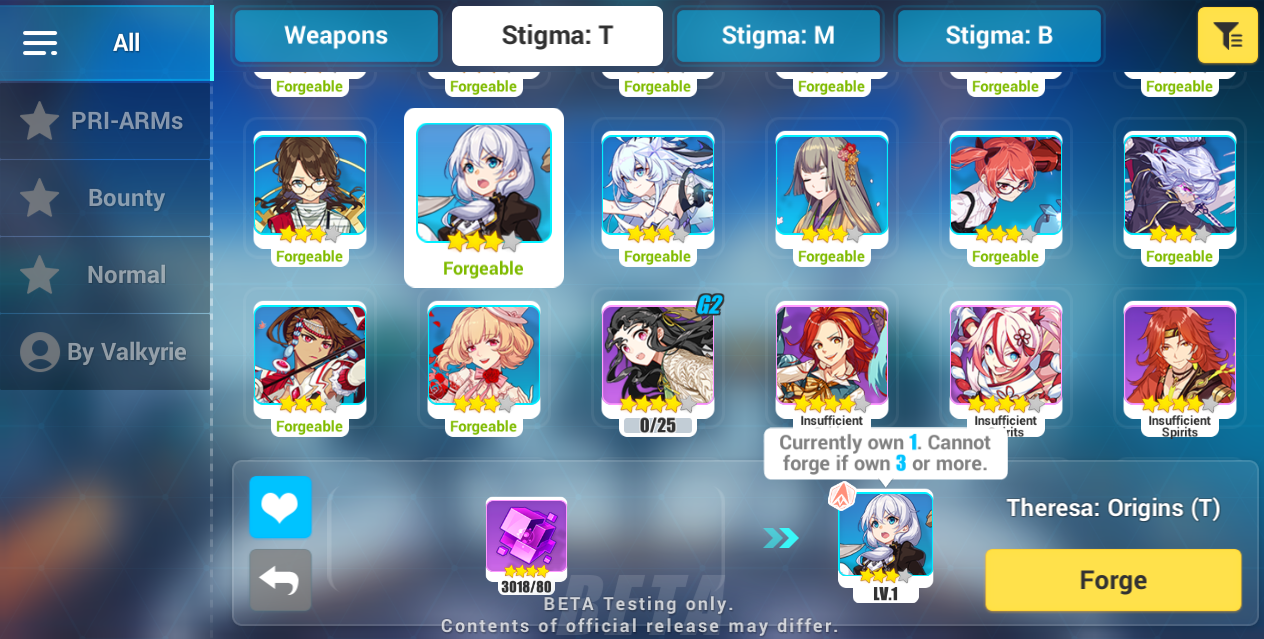 Book of Fuxi and Bella fragments are added;

Daily purchase limit of all items is adjusted to 99. 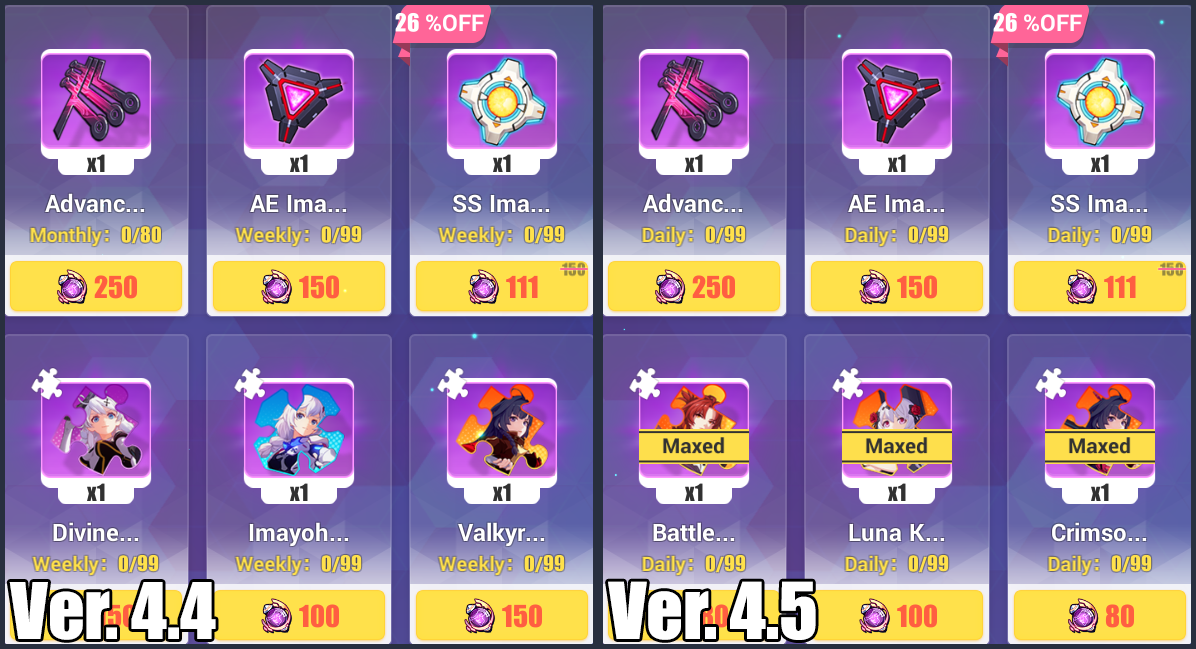 The required access level is decreased from lvl 30 to lvl 20;
Daily purchase limit of Time Structure, AE Imaginons, Normal Crystal Core and many other items is changed to 99. 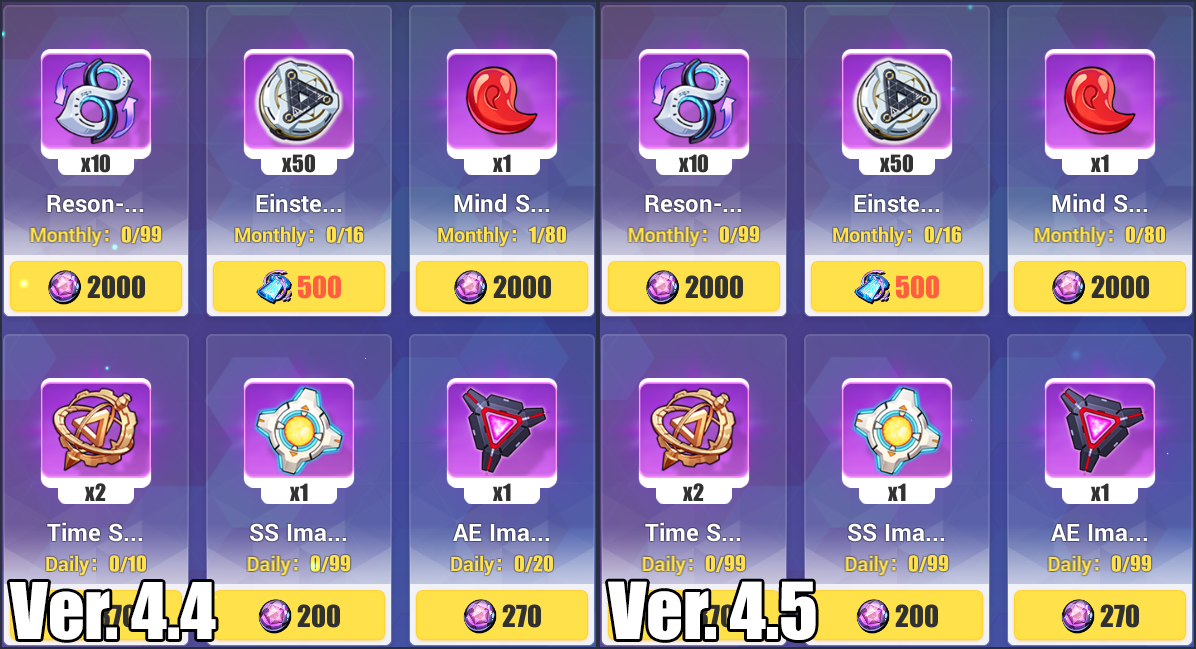 The required access level is decreased from lvl 20 to lvl 9. 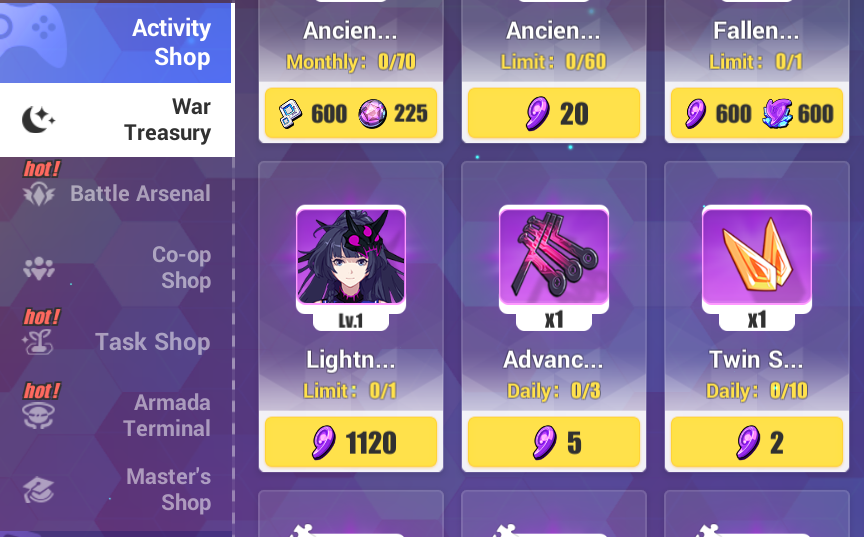 Captains of lvl 80+ can sort and filter equipment by damage and support when changing them; 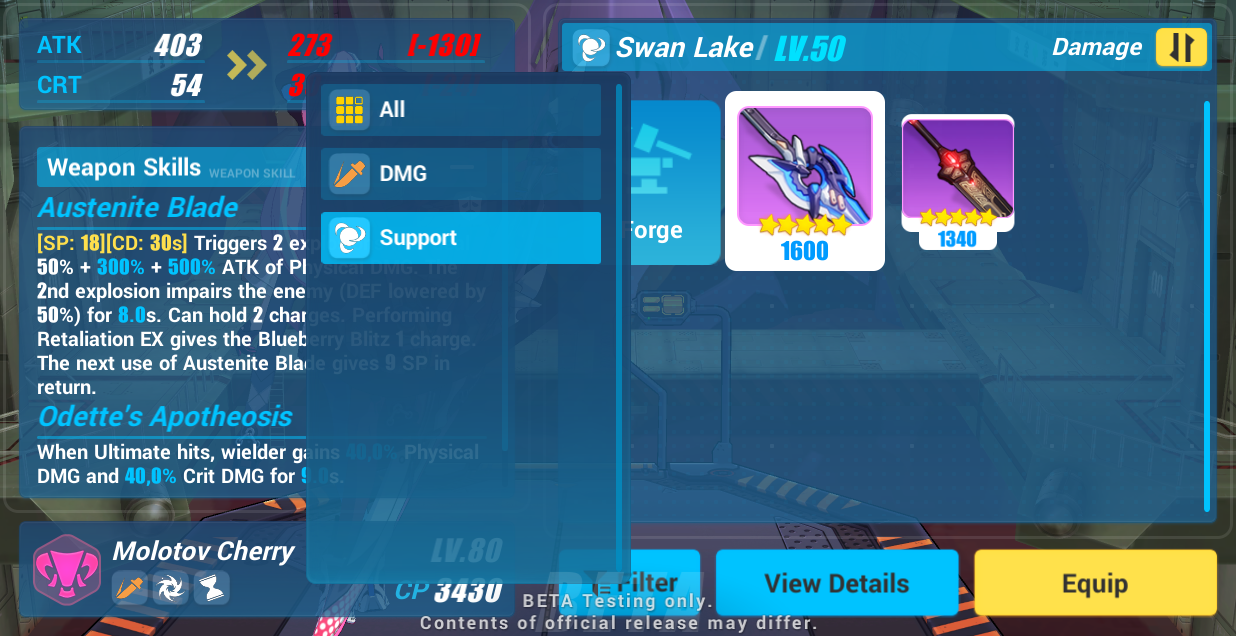 Equipment recommendations for Arena and Abyss are added. 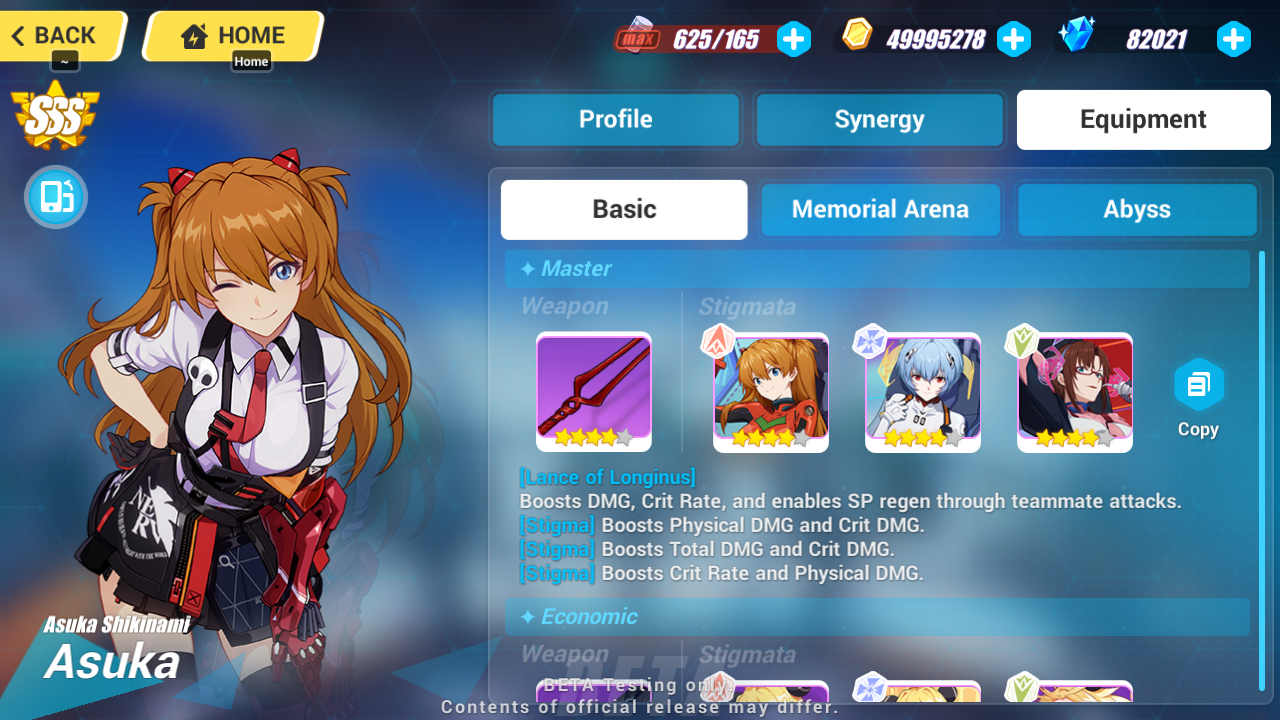 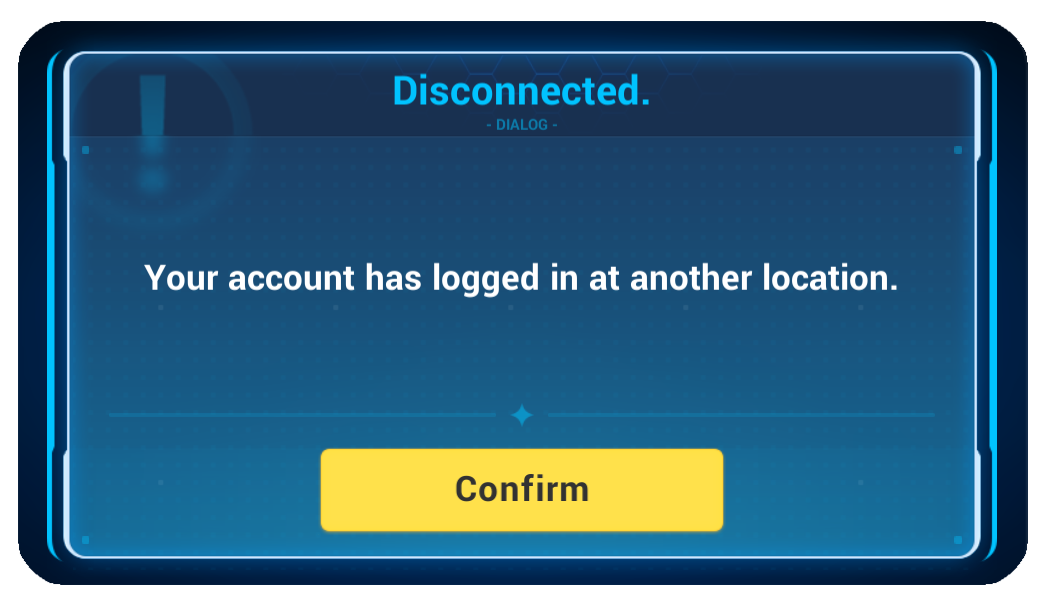 The Challenge stages in Stellar Mythos have been moved to Battlesuit Trials to be permanently available.

Dea Anchora's voice interactions and animations are activated, don't forget to check them out on Captain's Bridge!

That's all for today - thank you very much for reading our review, hope you like it! And it's a perfect time to watch some good old EVANGELION series and, of course, don't forget about the upcoming movie premiere! With love, Kopenych & A.E.N. 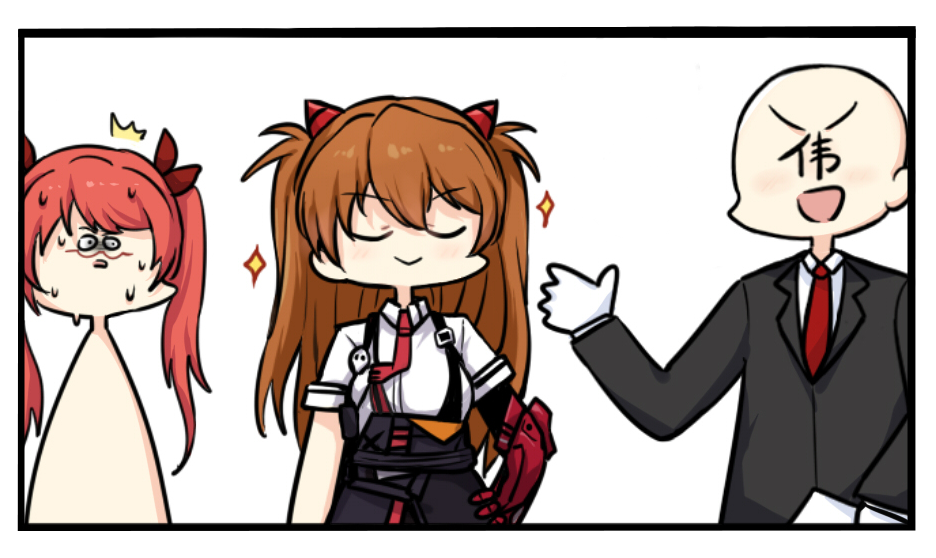