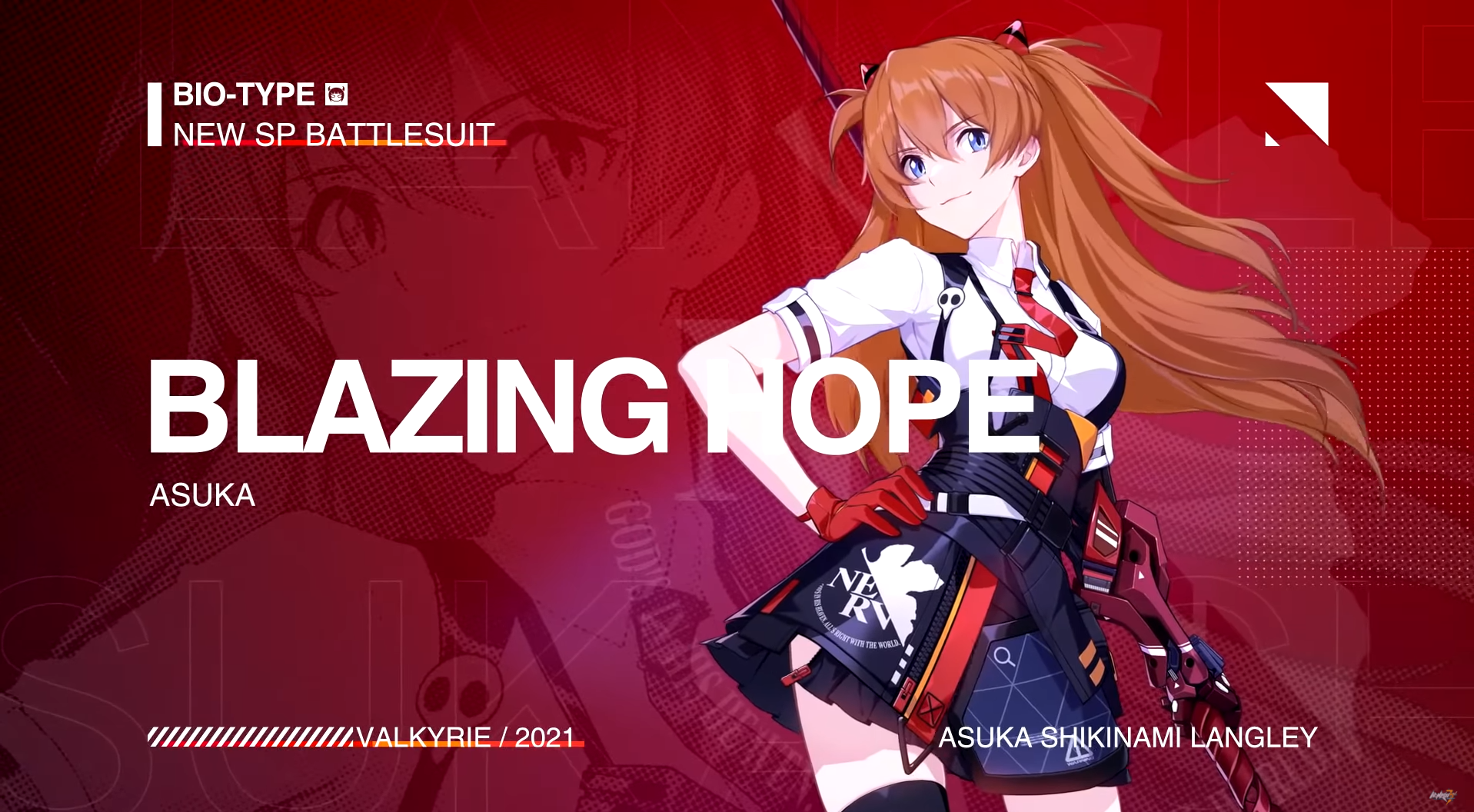 Asuka's SP battlesuit [Blazing Hope] debuts! She is a BIO melee Physical DMG dealer battlesuits that can deal massive DMG with Charged ATK by building up Field Energy. Her Ultimate boosts her DMG output and its Finisher summons a gigantic lance to strike down at enemies for lethal AOE Physical DMG!

Instead of calling her BH (Simple-form of Blazing Hope), I will call her Asuka instead.

OPINION OF THE BATTLESUIT:

S⭐ - Unlock 75% of her potential.
Most of the core skills have been unlocked and the output is considerable.

(Valkyrie are based on SSS-rank Lvl 80)

On the Journey of Hope  (Unlocked at SS-rank)

Treasure Up the Joy

Till We Meet Again  (Unlocked at SS-rank)

Evade enemy attacks up to twice in row. 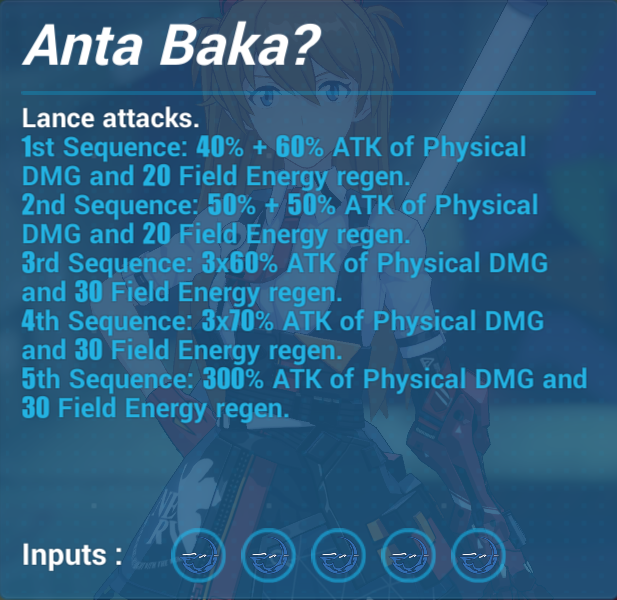 QTE: So Look at Me Please

Charge for a duration or longer to perform different attacks. 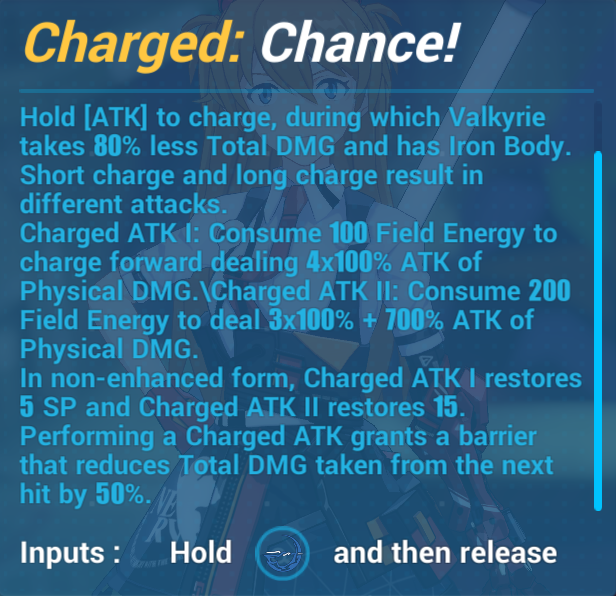 Don't Order Me  (Unlocked at S-rank)

I Knew It Already  (Unlocked at S-rank) 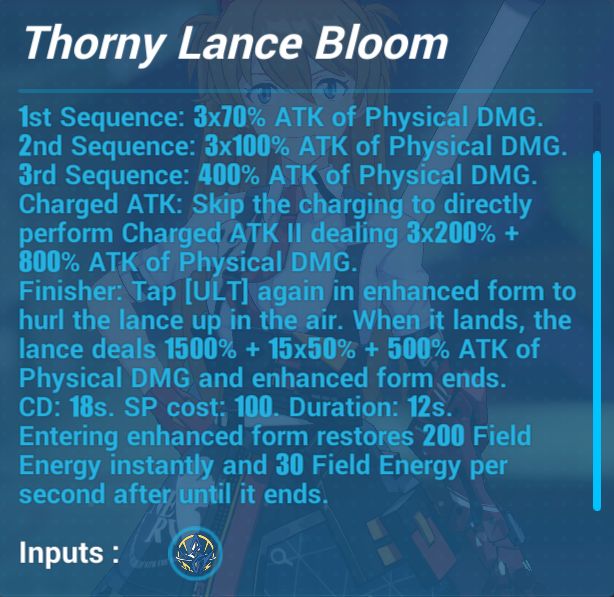 The [ATK] after Charged ATK to perform special attack.

In non-enhanced form, Mind, Matching, Moment enhances teammates on hit for 12s. Can be refreshed. Attacks from teammates restore 3 SP for Valkyrie when she's on standby. Team-shared CD: 1s.

Shall We Dance?  (Unlocked at SSS-rank)

(Valkyrie are based on S-rank Lvl 80)

In term of synergy, of course Asuka has its best with this Children set because it was made for her. The reason is because there are multiple bonuses that these stigmatas provide for Charged ATK, and the main damage source of Asuka is definitely her Charged ATK. Keep in mind that Asuka is NOT suitable for multiple mob-enemies, rather she preferred the boss battle where there is only one enemy to fully take advantage of her kit, signature weapon and stigmatas.

EL VF is one of the F2P lance that can be forged in Foundry. It is the next suitable for Asuka after LoL and HS. Even if it is an F2P weapon, it still gives good bonus such as 22% bonus Total DMG.
Michelangelo (T) increase host's Physical DMG by 7.2% for 3s. It can be stacks up to 5 times equal to 36% Physical DMG.
Marco Polo (M) provides 25% Crit DMG. When Combo Hit exceed 30, gain another 25% Crit DMG.
Michelangelo (B) boost Crit DMG by 14% for 3s after every Basic ATK (including Charged and Combo ATK). Max stack is 5 equals to 70% Crit DMG.
2-pc Mich boost host's Total DMG Multiplier by 15%. Gain another 15% TDM Multiplier for 15s upon entering the battlefield.

In this comparison, not only we will compare each gearing plan, but also the difference of damage output of Asuka S, SS and SSS rank.
Test Instance use the same movement set, no ELF and emblem. 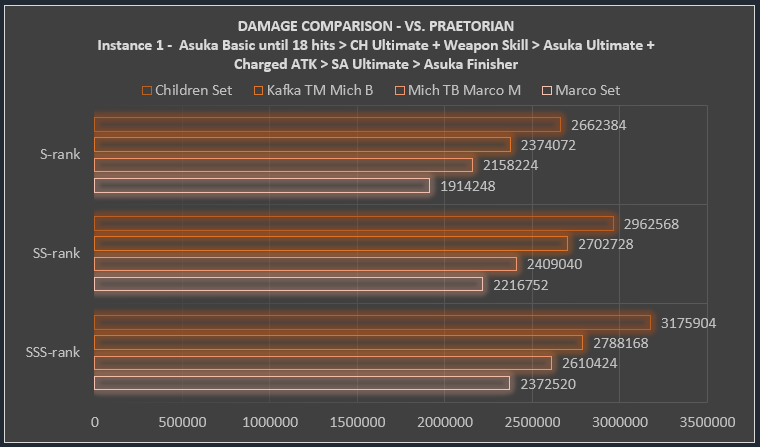 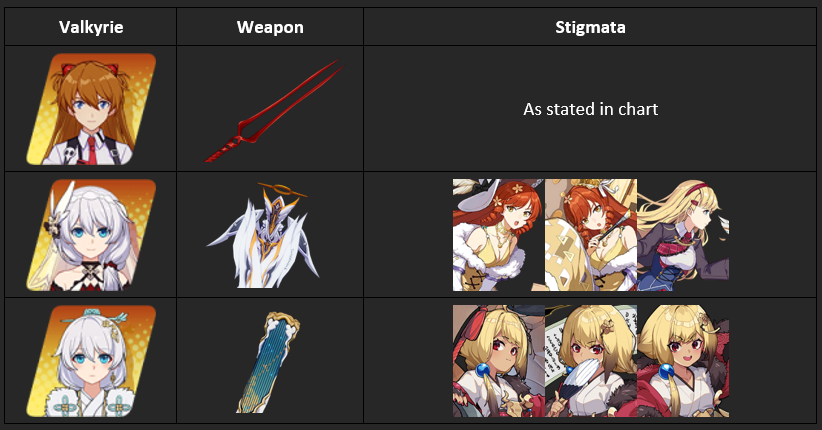 Both SA and CH are Physical Support Valkyrie.

Unfortunately, there is no footage of this team in action, but in the tutorial for Asuka's battlesuit, there is a demonstration on how to unleash Blazing Hope's full potential with this team.

Drive Kometa had always been paired with either SA or CH then DPS.

Crippling Field is especially great with Asuka because her skills is great against boss that have shield.

Asuka is yet another great Physical Valkyrie IF she is SS-rank.

For F2P player, keep note that you can only get her into S-rank only from the event. To upgrade her into SS and SSS, you need to pull her from Gacha. There is no other way to upgrade her, also her Gacha is exclusive in version 4.5 only. That also includes her signature equipment.

While she is not that dependent on her signature stigmatas, it is better for her to equip her signature weapon. Her weapon alone can boost her Total DMG and Crit Rate for Charged ATK and Ultimate finisher, also restore her SP.

Is she worth to SSS?
In my opinion, no. This is because the difference between her SS and SSS rank is merely 5 percent. BUT, if you intend to use her in boss fight, it is crucial to upgrade her into at least SS-rank.
Another but, if she is your childhood waifu, then sure, SSS her for respect. 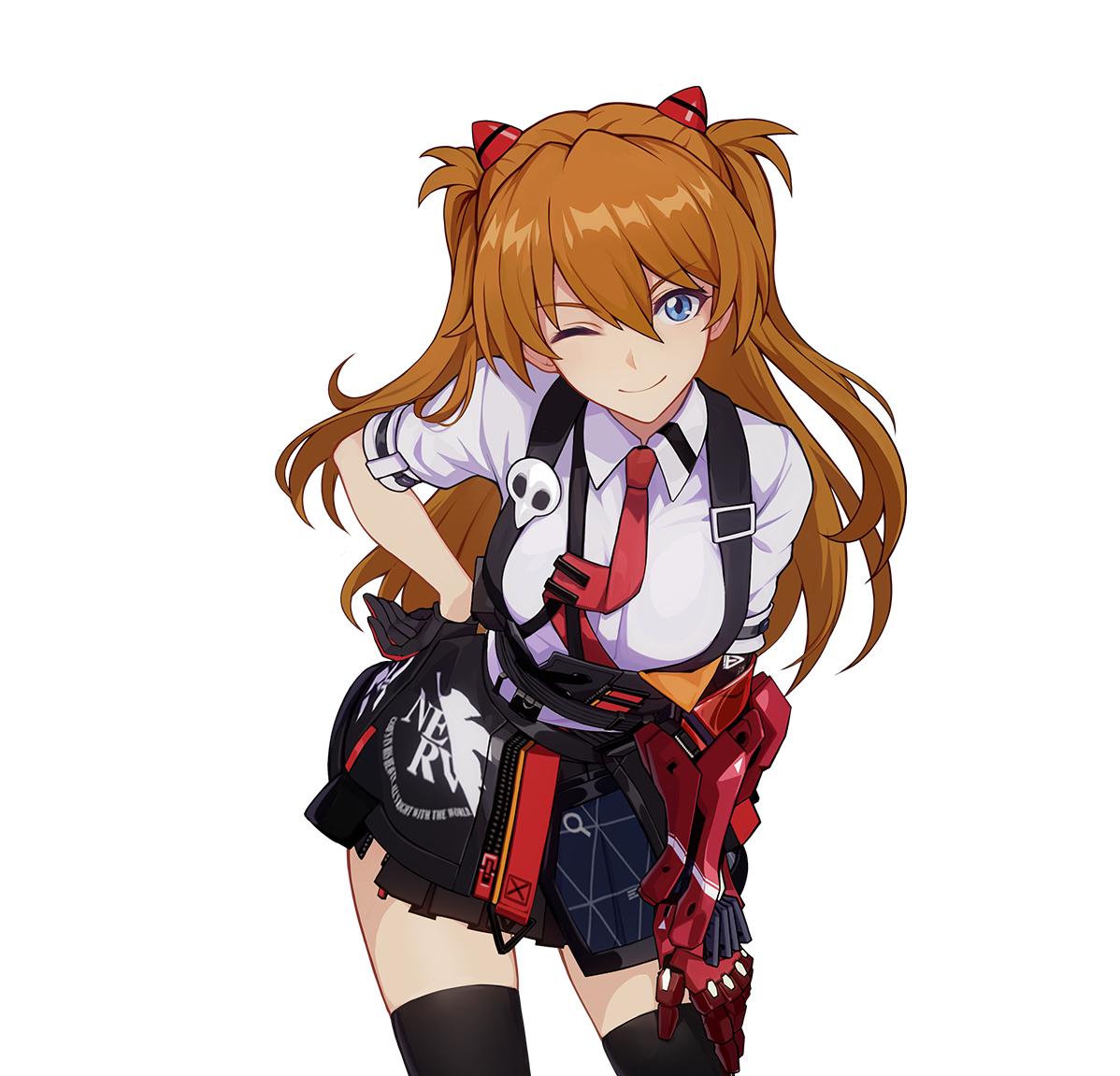