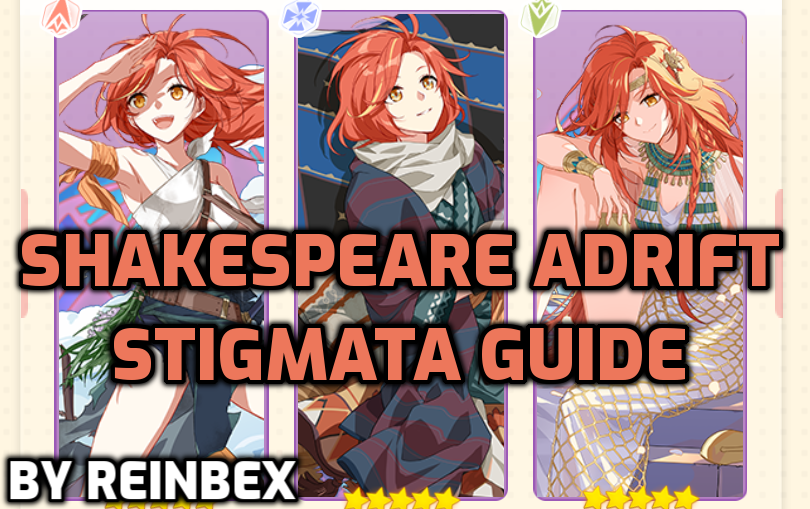 Hey, Captains! Today we are going to be taking a look at the Traveling Skipper set: Shakespeare Adrift introduced in v4.4 alongside Dea Anchora. Shakespeare Adrift is a Fire DMG-based stigmata set that revolves around the host spamming Ultimate attacks. In this guide, we will review the set's functions, which valkyries will enjoy the stigmatas the most, and its place in today's meta. 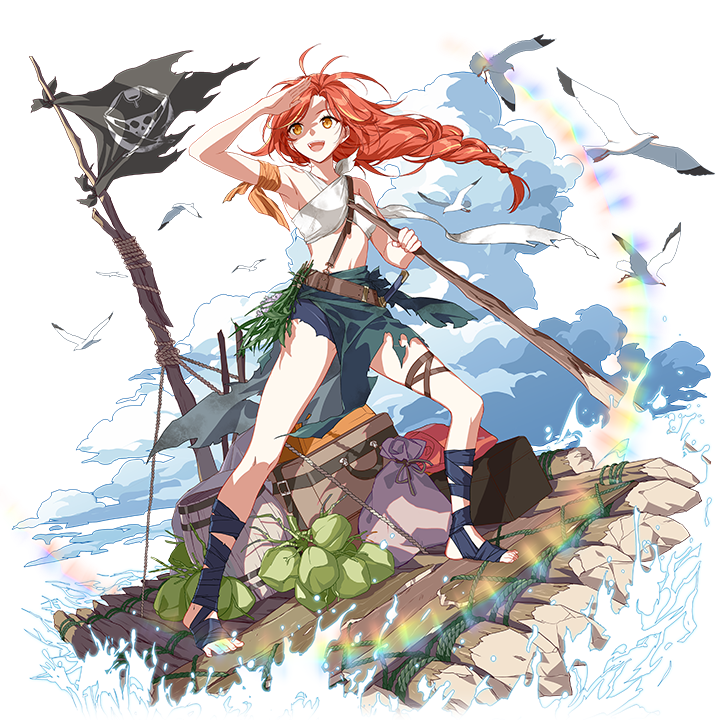 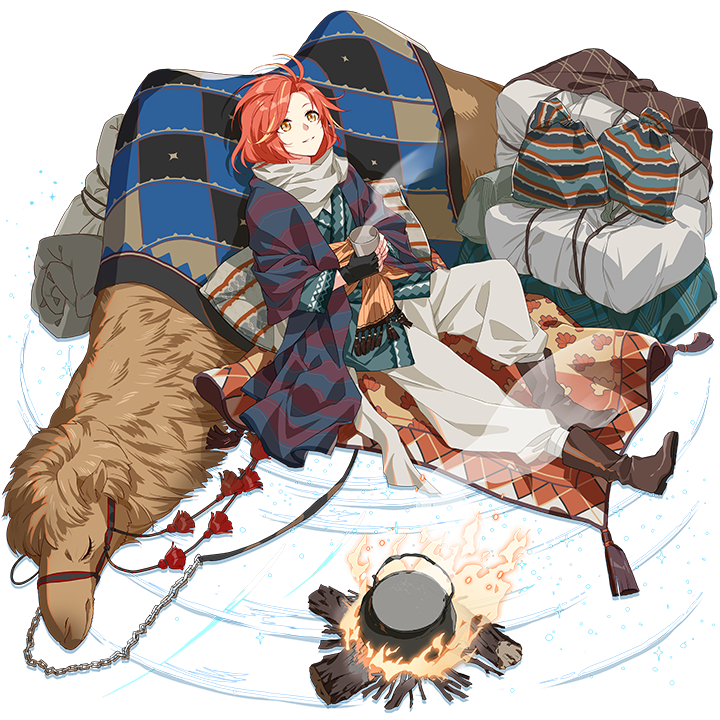 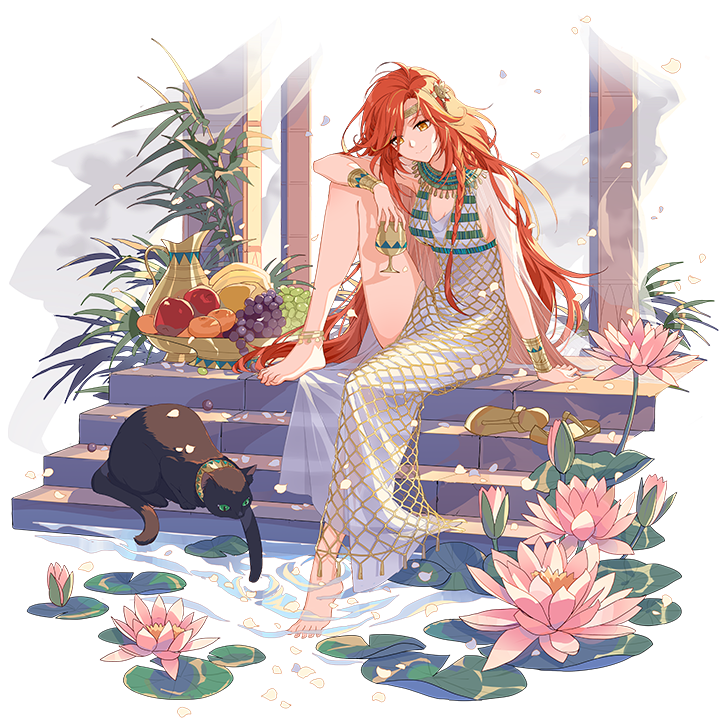 2-pc bonus: Shakespeare's Globe
Boosts Fire DMG by 20.0%. Landing an Ultimate within 4s after it's cast raises Alignment by 1 (4 levels in total: Jove/Venus/Luna/Sol). Alignment drops by 1 every 10s and can be refreshed at level 4. Alignment 4 (Sol) makes enemies take 20.0% bonus Fire DMG from host (independent effect). 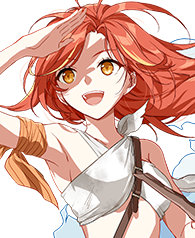 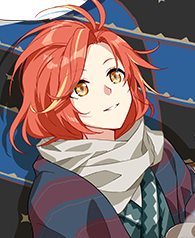 Shakespeare Adrift (M): Provides TDM and Fire DMG bonuses. The first buff, a straight up passive TDM buff, is very standard and good. Its second buff encourages using the 2pc effect. Everytime you raise the Alignment, your Ult gains 8% Fire DMG buff, totaling at 32%. Keep in mind that lowering your Alignment also lowers the buff, so it's encouraged that you raise it to the max level 4 Alignment and keep it there for best damage. 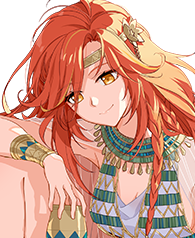 Shakespeare Adrift (B): Provides Fire DMG buff and SP restoration bonuses. The final piece of the Shakespeare Adrift set provides yet another standard Fire DMG buff, much like its T piece counterpart. However, its secondary effect provides the host with 3 sp everytime you raise the Alignment's level up (max at 4) or refresh the level (starting at level 4). For a valkyrie that can spam low sp-cost ultimates such as DEA, the host can easily recover back their SP and remain consistent in their attack style. 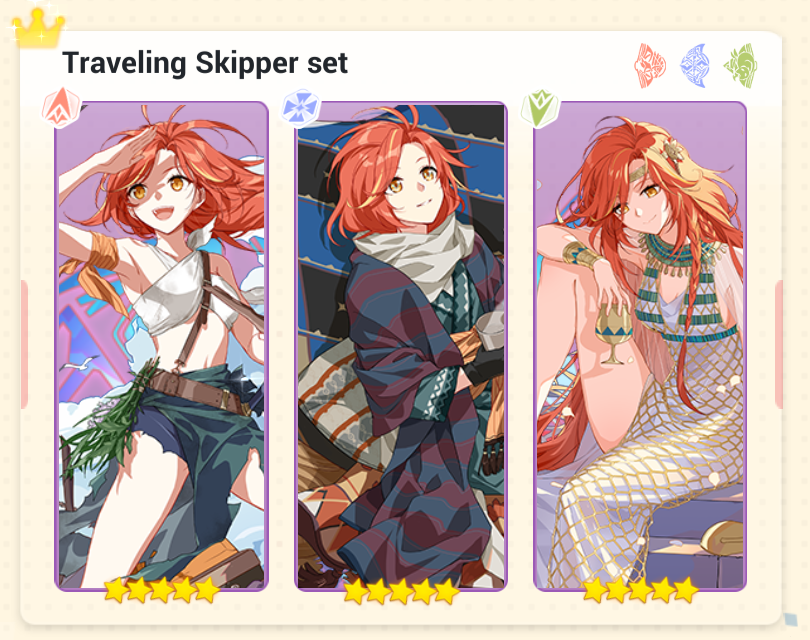 So here's now it works:
Everytime you cast an ultimate (must spend SP), only its first hit (within 4s after cast) will count towards raising the Alignment level. This means for the following:

This means that unless your valkyrie has a low sp-cost Ultimate with low to zero cooldown and high SP-recovery rate, they cannot utilize Shakespeare Adrift to its fullest potential. 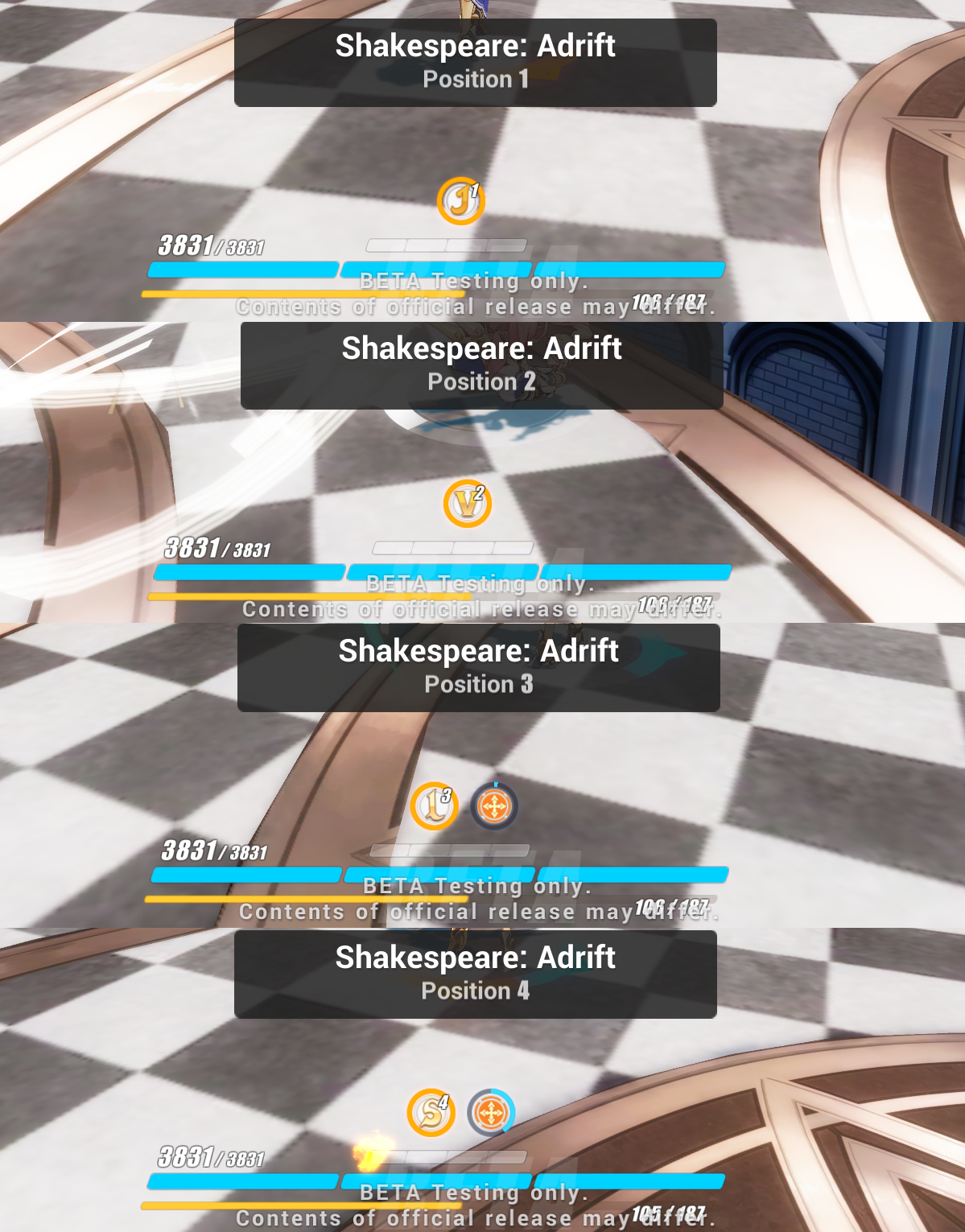 And lastly, while you are in Alignment 4, enemies will be debuffed into intaking 20% more Fire DMG from the host, which is a good debuff effect. This debuff avoids the “watering down” of same buffs stacking.

3-pc bonus: Provides TDM bonuses. The 3-pc effect providing a whopping 30% TDM passive is already very good, but as a bonus, Shakespeare Adrift encourages the host to be Durandal. The extra 15% TDM for Durandal's Ultimate can total the power to be 45% TDM. In addition, Durandal's Throws and QTEs raise Alignment as well thanks to this 3-pc effect. This saves so much time to reaching and maintaining Alignment level 4, ushering for maximum potential DMG as soon as possible.

We will be taking a look at how Shakespeare Adrift fares against the other popular numerous Fire Stigmata combinations. 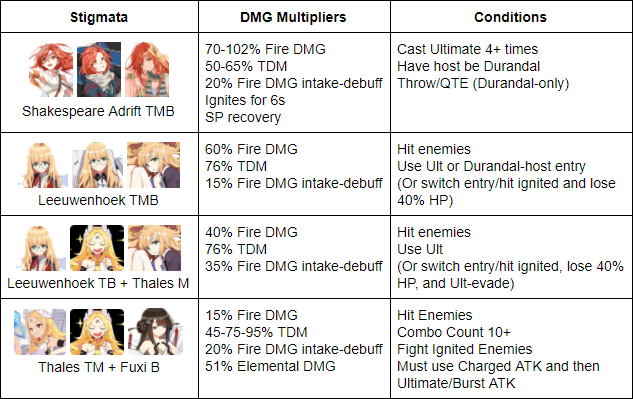 Because Shakespeare Adrift only works best with a Fire Valkyrie that can spam the casting of Ultimates (in realistic scenarios, so no VK), only Dea Anchora will be tested in all stigmata tests. 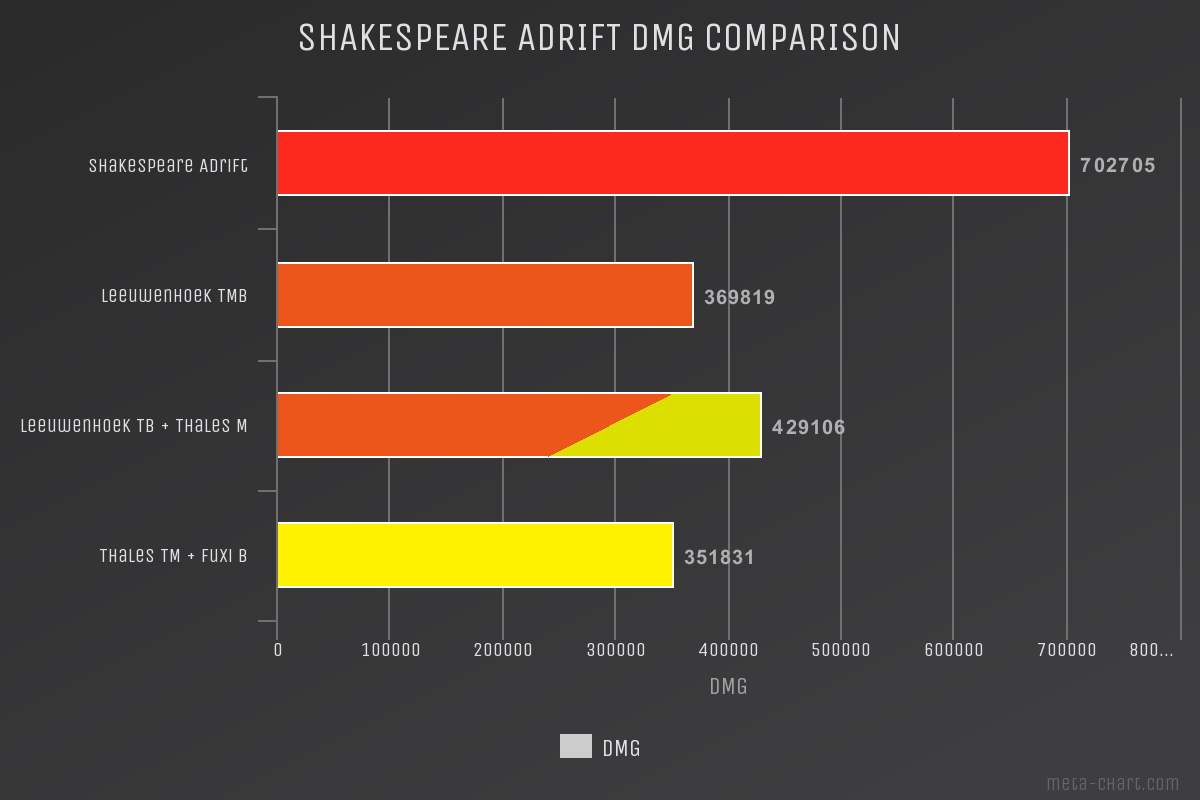 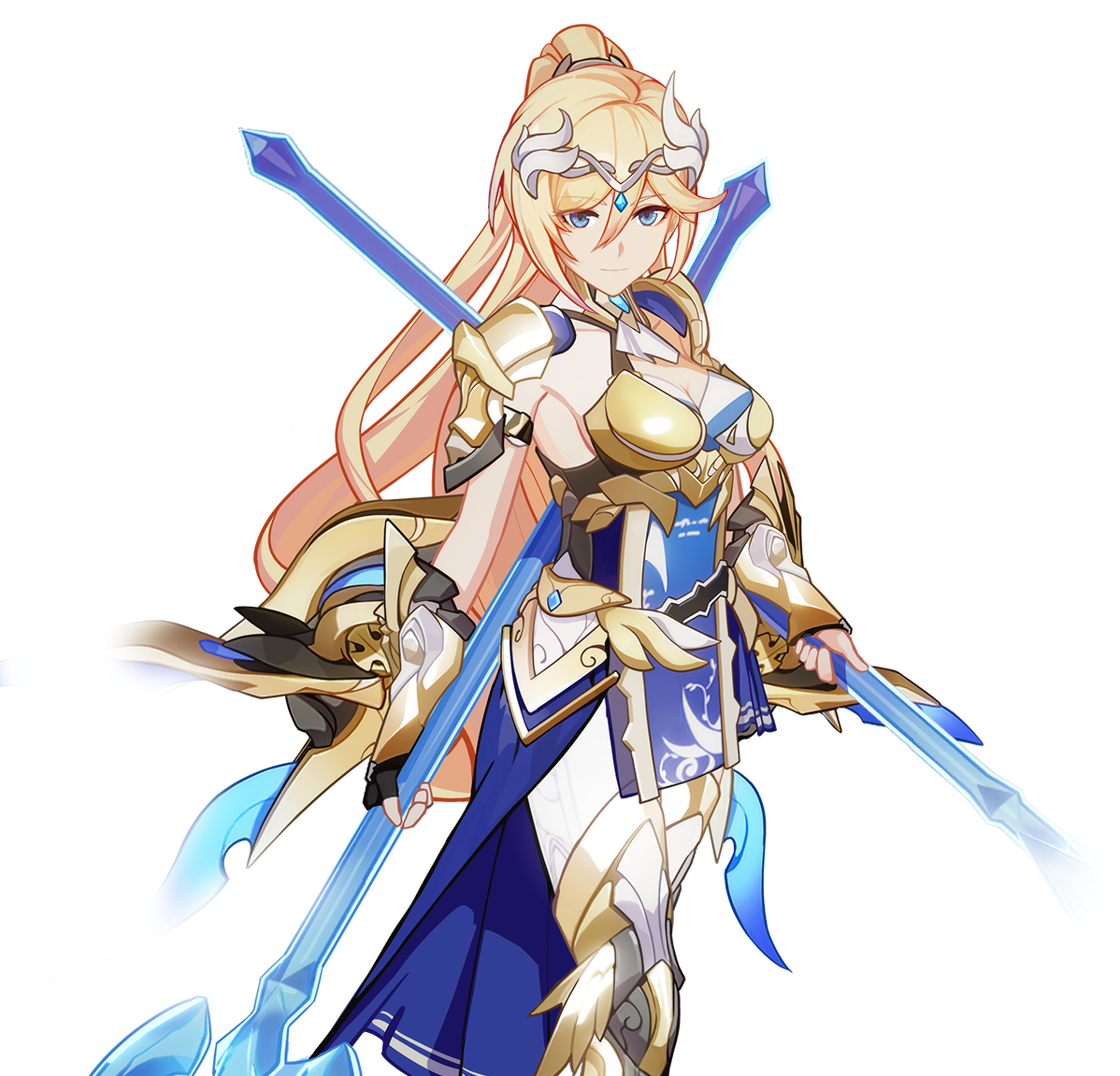 If it isn't obvious by now, Shakespeare Adrift is designed for Dea Anchora. The stigmata set has plenty of strong passive effects, but it only truly shines when the host is capable of spam-casting ultimates to build up Alignment levels. The 3-pc effect helps leeway this a bit by enabling QTEs and Throws of Durandal battlesuits to also raise Alignment levels. For VG, she can almost never reach Sol Alignment even when equipped with the full set because of her ultimate's high sp-cost and high CD. Which is why DA is most suited for Shakespeare Adrift. Her abilities to spam cast-ultimates, quickly recover her SP to continue spamming ultimates, and that her strongest attack comes in the form of also an ultimate, allows her to enjoy all the bonuses that Shakespeare Adrift has to offer. Here are some of the gameplay examples of DA utilizing Shakespeare Adrift in action:

In conclusion, Shakespeare Adrift is a powerful Fire DMG Stigmata designed for a valkyrie such as Dea Anchora to spam-cast Ultimates. If you have DA, then I highly recommend getting Shakespeare Anchora in order to boost her power to the limits. It is mainly for her and should only be sought if you have her. 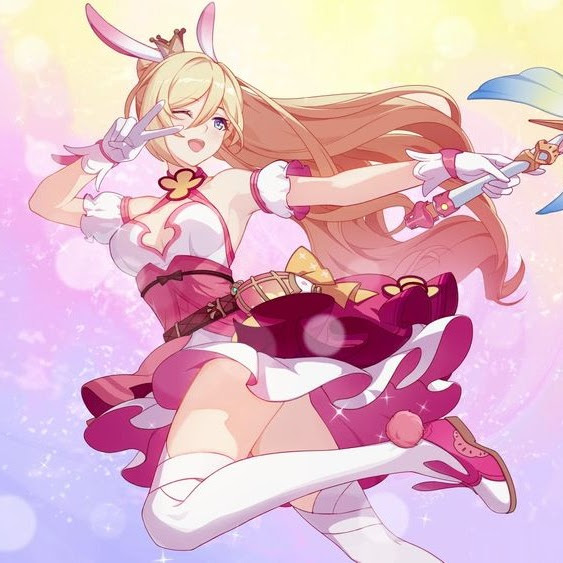