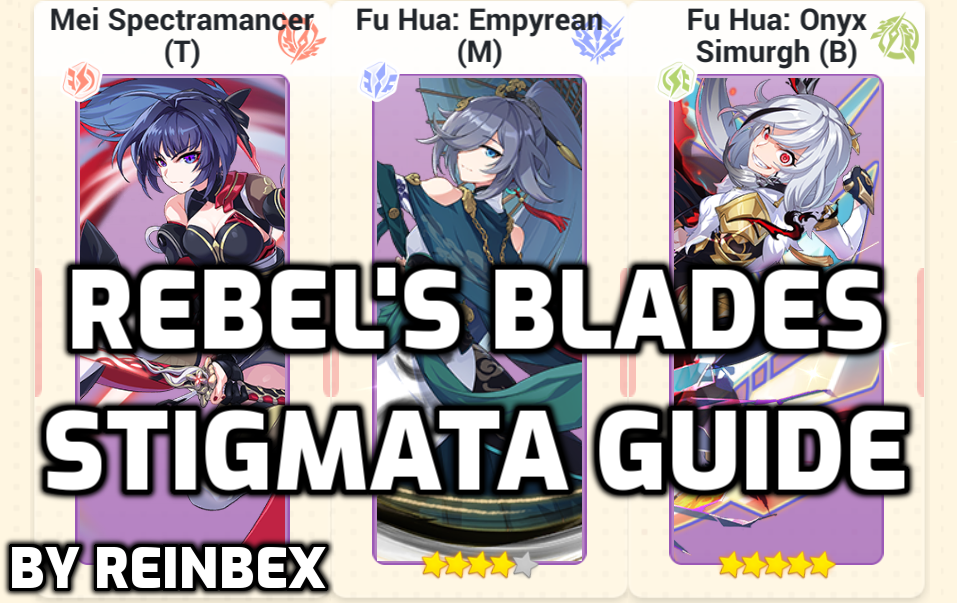 Hey, Captains! Today we are going to be taking a look at the second half and Physical iteration of the Event Stigmata set: Rebel's Blades. Released piece by piece per recent patches, the entire set is finally available to players as of v4.4!. Rebel's Blades' second half is a f2p event-only stigmata set that promotes buffing Physical DPS valkyries. In this guide, we will review this half of the set's functions, which valkyries will enjoy the stigmatas the most, and its place in today's meta. 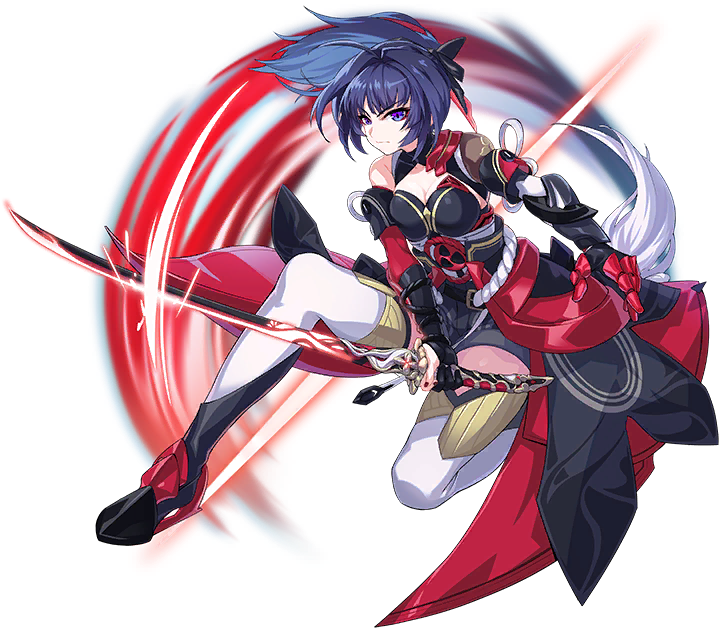 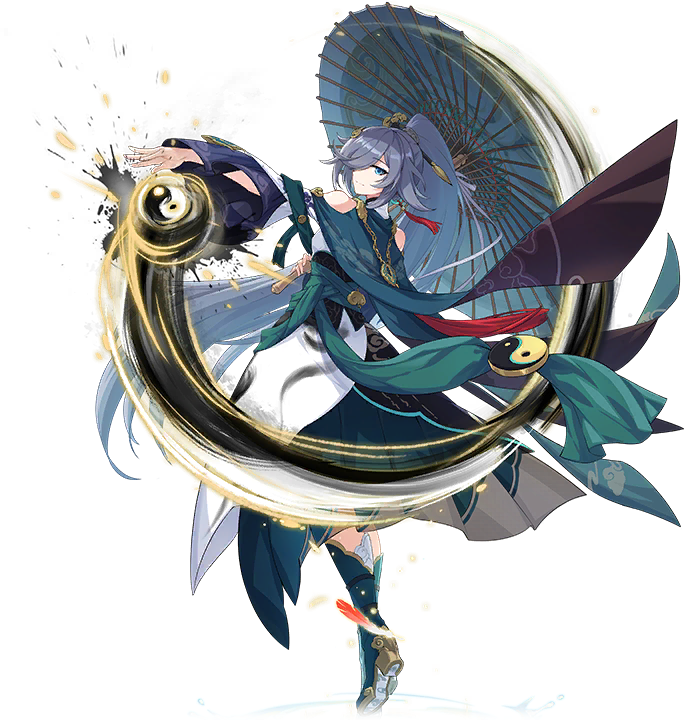 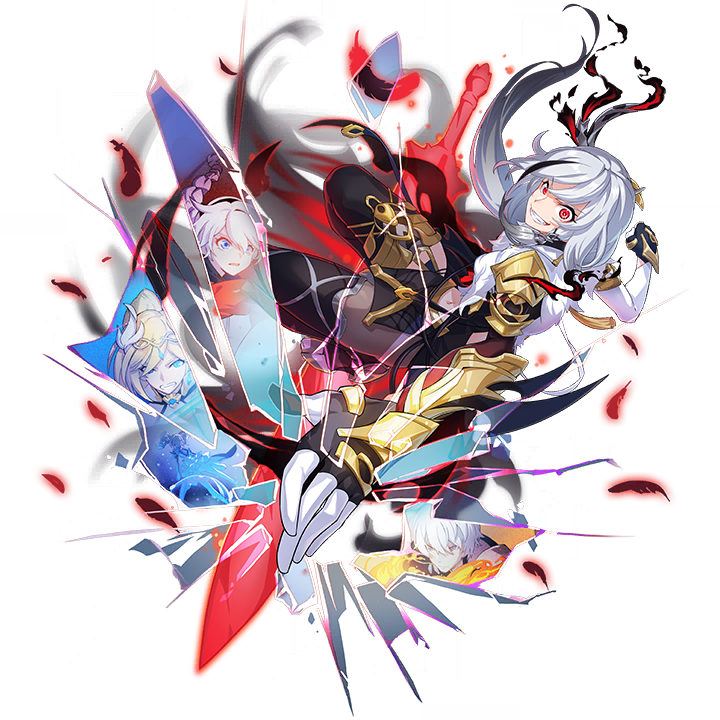 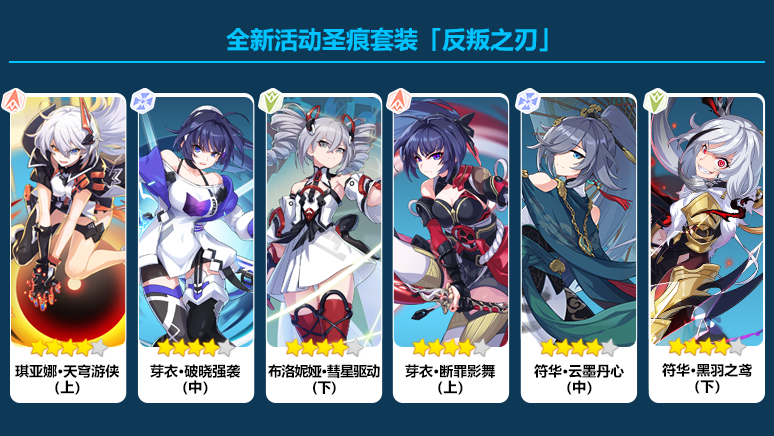 Before we proceed, we need to clarify about the first half of the Rebel's Blades set. Because the first three pieces only provides Lightning DMG, and therefore do not synergize well with the later three pieces' effects of Physical DMG, Crit Rate, and Crit DMG buffs, there will be no analysis in utilizing any combination of pieces between the first three and later three pieces of the entire set. As stated before, we will only be taking a look at the second half of the Rebel's Blades set. However, if you have collected all six pieces, you will be eligible to collect the HOMEI Mei Emblem. 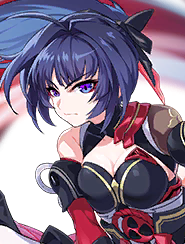 Mei Spectramancer (T): Provides Physical DMG bonuses. The stigmata provides a passive 13% Physical DMG buff that can build up to a total of 33%. Given how easy it is for the host to stack up its buffs (via hitting enemies) and that it lasts for a decent 10s per stack, it's a good f2p stigmata. 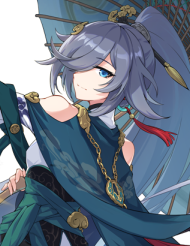 Fu Hua: Empyrean (M): Provides Crit DMG buff and some self-healing. The healing aspect of this piece is insignificant; it's only helpful to players at lower levels who have a more difficult time dodging attacks. As for the M piece, it's...decent. It provides a passive Crit DMG bonus that works at all times. However, it's only 15%, which is neither too amazing nor bad for a f2p stigmata. 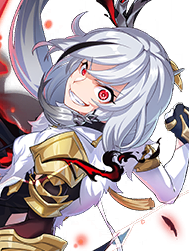 Fu Hua: Onyx Simurgh (B): Provides Crit Rate and Crit DMG buffs. The final piece of the Rebel's Blades set provides a Crit Rate buff to increase Crit DMG consistency. Its other effect is to improve upon the lack of Crit DMG the M piece provided with a combo-reliant Crit DMG buff of 12% if 15 combo or 25% if 30+ combo. Due to how easy it is to trigger the effects of the B piece, it's easy to say that Onyx Simurgh is the best piece of the set. 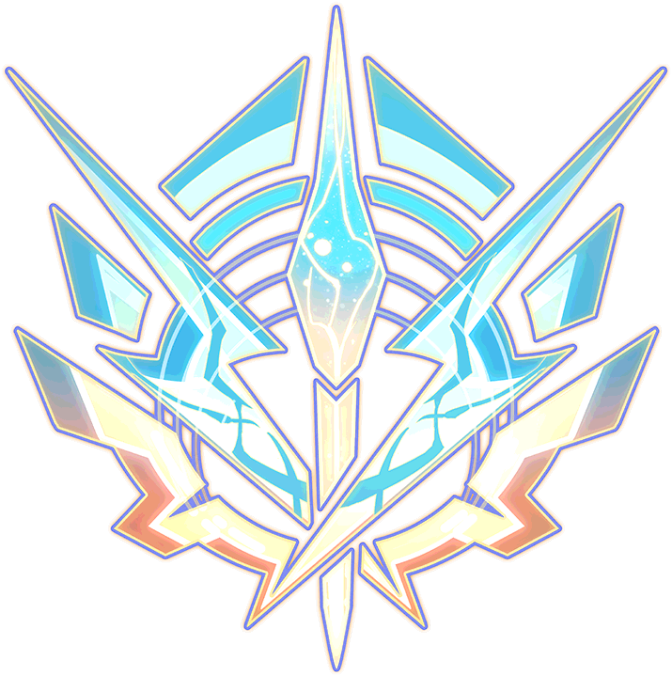 2-pc bonus: Provides TDM bonus to host. Unchanged since the release of its Lightning DMG pieces, the 2-pc effect provides a very nice 30% TDM bonus to the host given that the combo count is at least 25. TDM is a great addition to all the Physical DMG and Crit DMG that the single pieces only provide. For a f2p stigmata, this is a very powerful buff with an easy condition.
3-pc bonus: Provides ATK Speed and Max HP bonuses. The 3-pc effect is very weak even for what it is. Its 10% ATK speed buff is very small and Max HP buffs are usually anyway. ATK speed does help build combo count however.

We will be taking a look at how Rebel's Blades (Physical) does compared to the best F2P Physical DMG Stigmata set: Marco Polo. 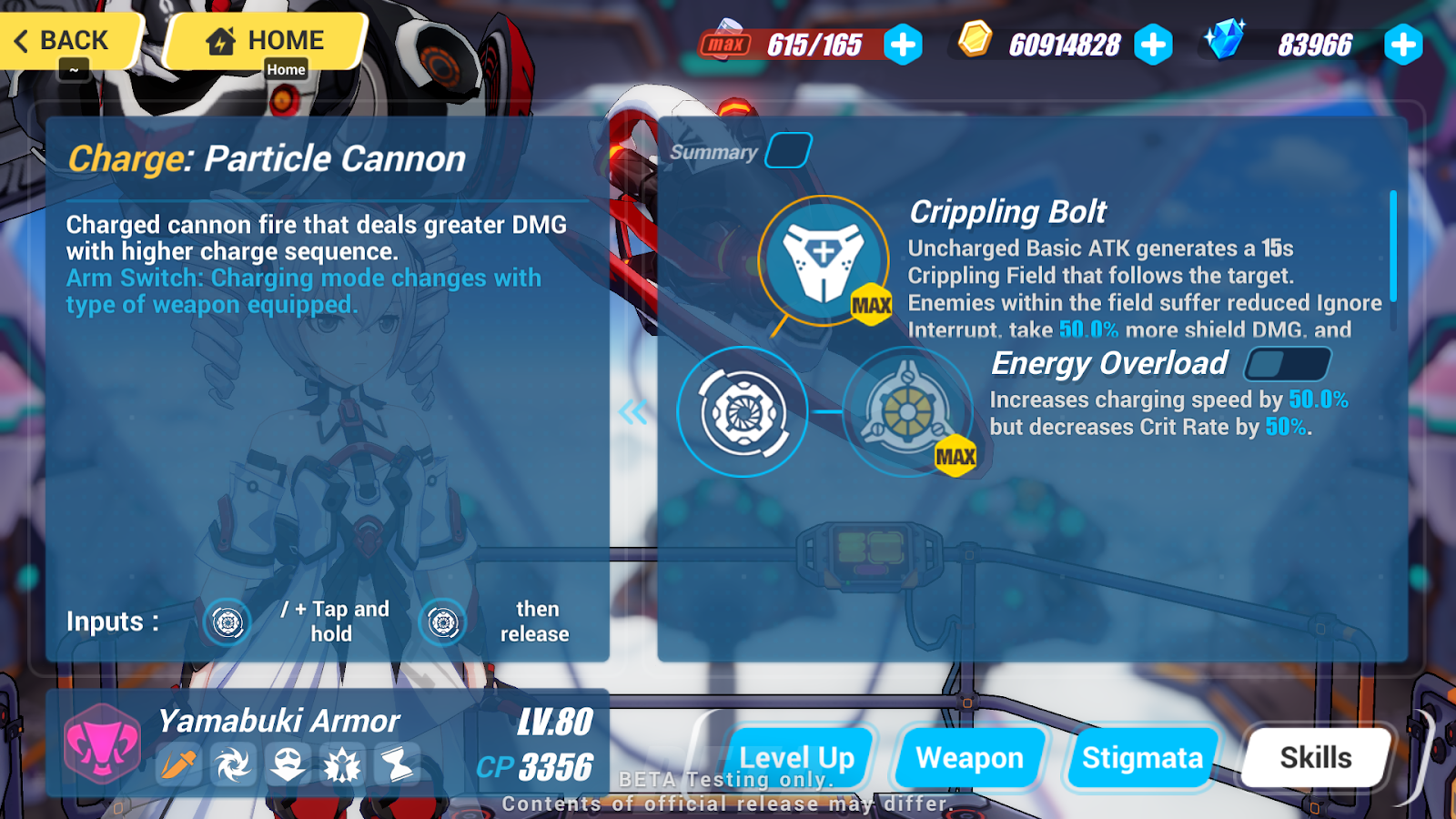 And to prove it, both sets were tested against each other when equipped on Drive Kometa (DK) , a valkyrie with a high Crit Rate Leader Skill. The high Crit Rate is to ensure as much consistency between hits.

Tests were conducted against a Honkai Beast with:

Sequence of each test
In all test cases (Three per side to avoid deviation), DK held down her laser at point blank range to build up combo count. Upon exhausting all her laser charge, DK enters Burst Mode and attacks nonstop (7 total attacks) until the end of Burst Mode. 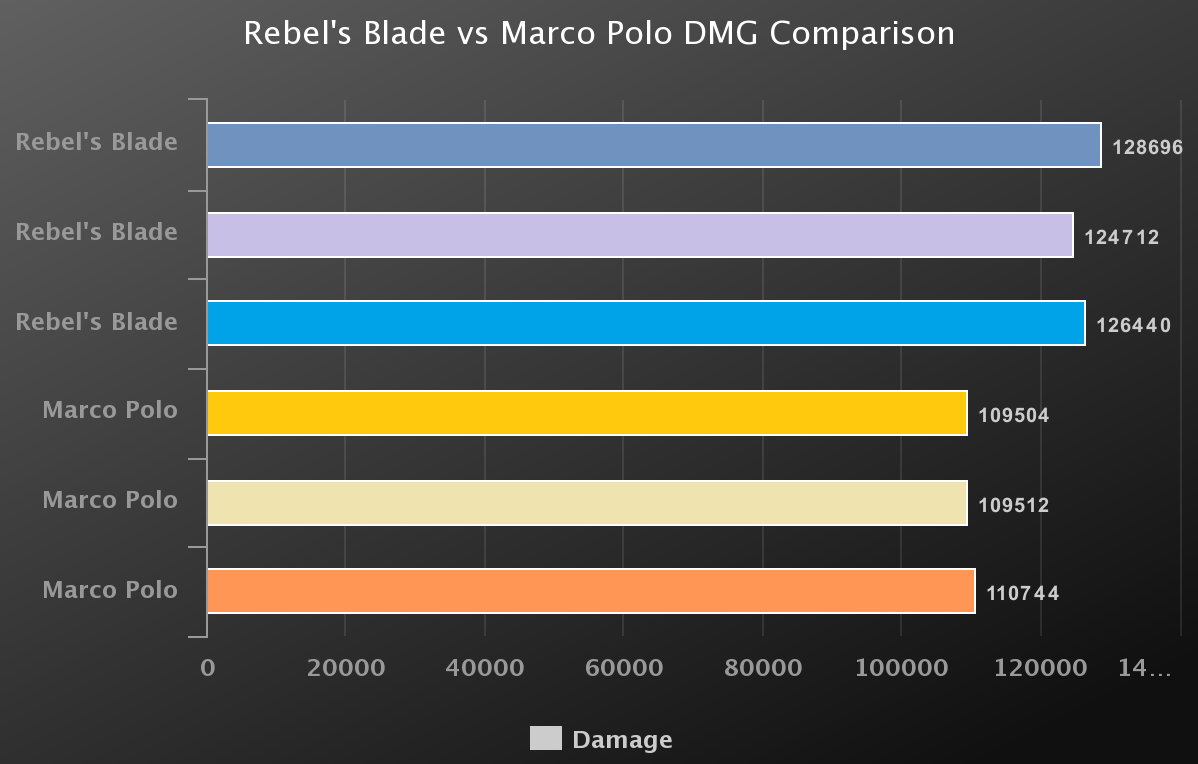 As we can see from the results, Rebel's Blades outperformed Marco Polo by about 15.2% more DMG.

Rebel's Blades (2nd Half) is designed for Physical DPS valkyries who are capable of fast attacks. With fast attacks, they can build up and maintain their combo count (the exceptions being FTD and SP; more on them later).

Rebel's Blades, as a f2p event-only stigmata set, is not capable of outperforming various gacha-only stigmatas. However, given the versatility and easy-to-setup good effects of the set, f2p players would be encouraged to collect and make full use of this set. BKE, SP, NS, TP, and HoV are all valkyries who can quickly build up the combo count and make full use of Rebel's Blades quickly.

As for FTD and SP, their capability to build up combo counts isn't too fast nor is it too slow. However, due to their place in the meta and usual team up with support valkyries that can build up the combo count such as Drive Kometa, Celestial Hymn, and Starlit Astrologos, f2p players can also equip the Rebel's Blades set onto FTD and SP for a convincingly good performance.

If you're missing a piece, I would not recommend substituting the missing Rebel's Blades piece with its Lightning variant, but you can opt for the following Stigmatas due to the nature of Rebel's Blades' 3-pc effect being barely decent. Do keep in mind that it's recommended to have two pieces at once because of the 2-pc effect.

In summary, Rebel's Blades (2nd half) makes for a great f2p stigmata set amongst other f2p stigmatas despite being exclusively event-only and lacking when compared to gachable stigmatas. If you are an f2p, it's highly recommended that you invest in this set given its good effects and versatility.