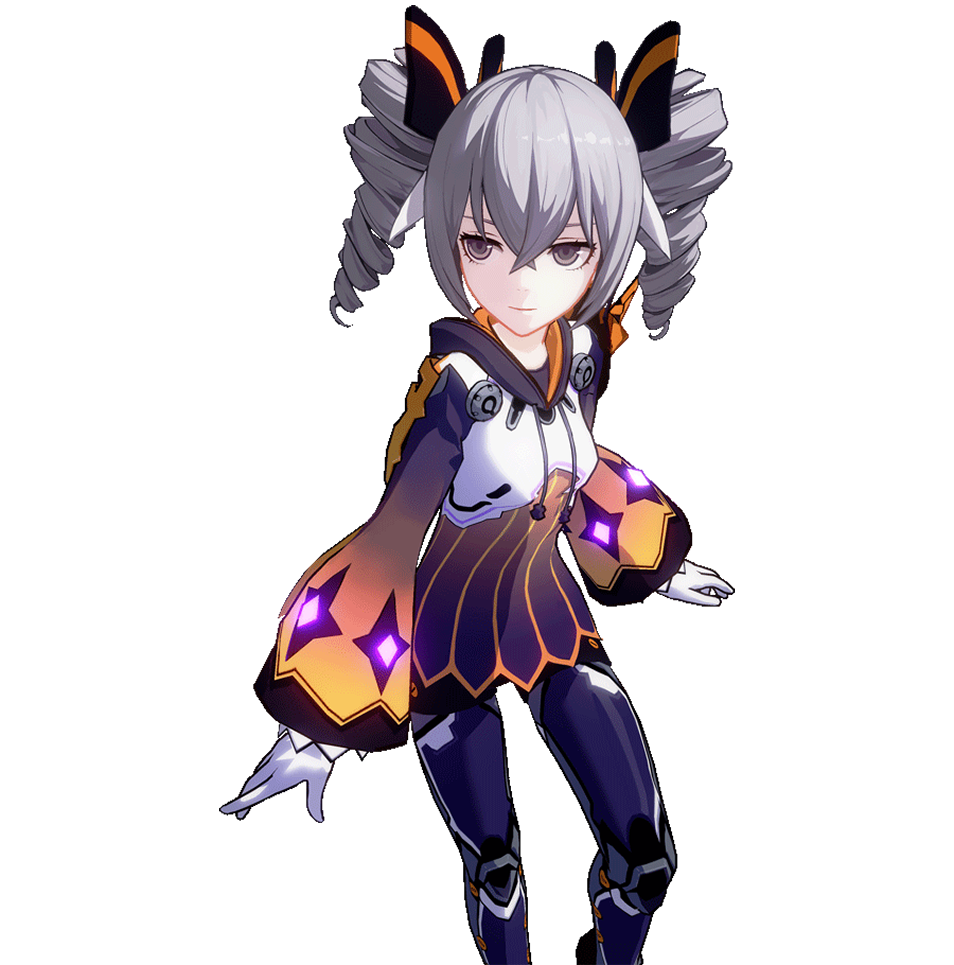 This guide is built to provide readers a better understanding of Bronya's Dimension Breaker battlesuit aka DB. Here, readers can find out more about DB's kit, how to upgrade her, and how to best play her in the game. 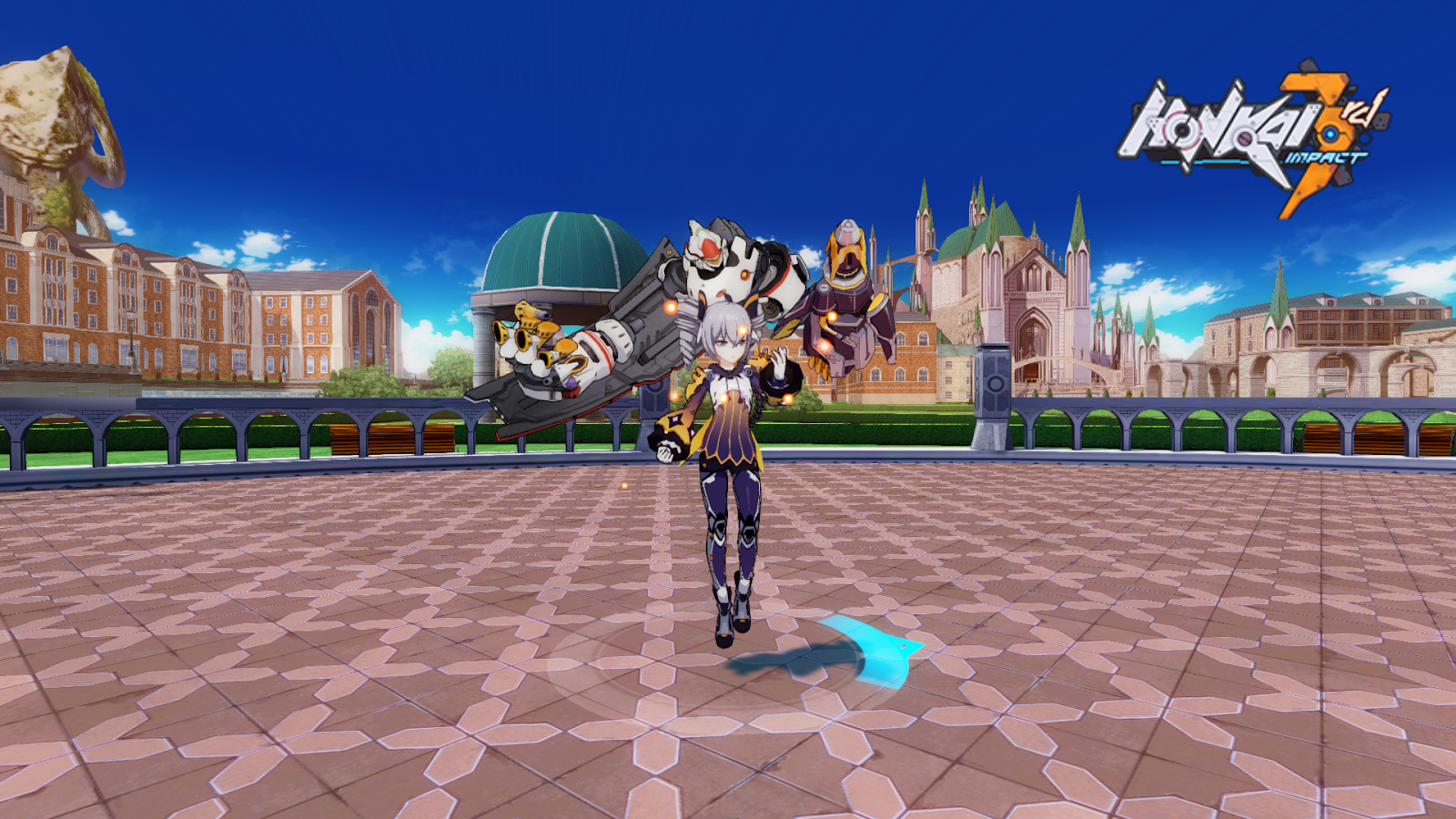 DB is a farmable S-rank MECH valkyrie who specializes in lifting and time slowing.
Her fragments can be “farmed” through buying Yae Sakura Casks (8 max per week) from the War treasury. These casks will randomly contain either a DB or Meme fragment. Keep in mind that this method is unreliable and can take a very long time to farm. 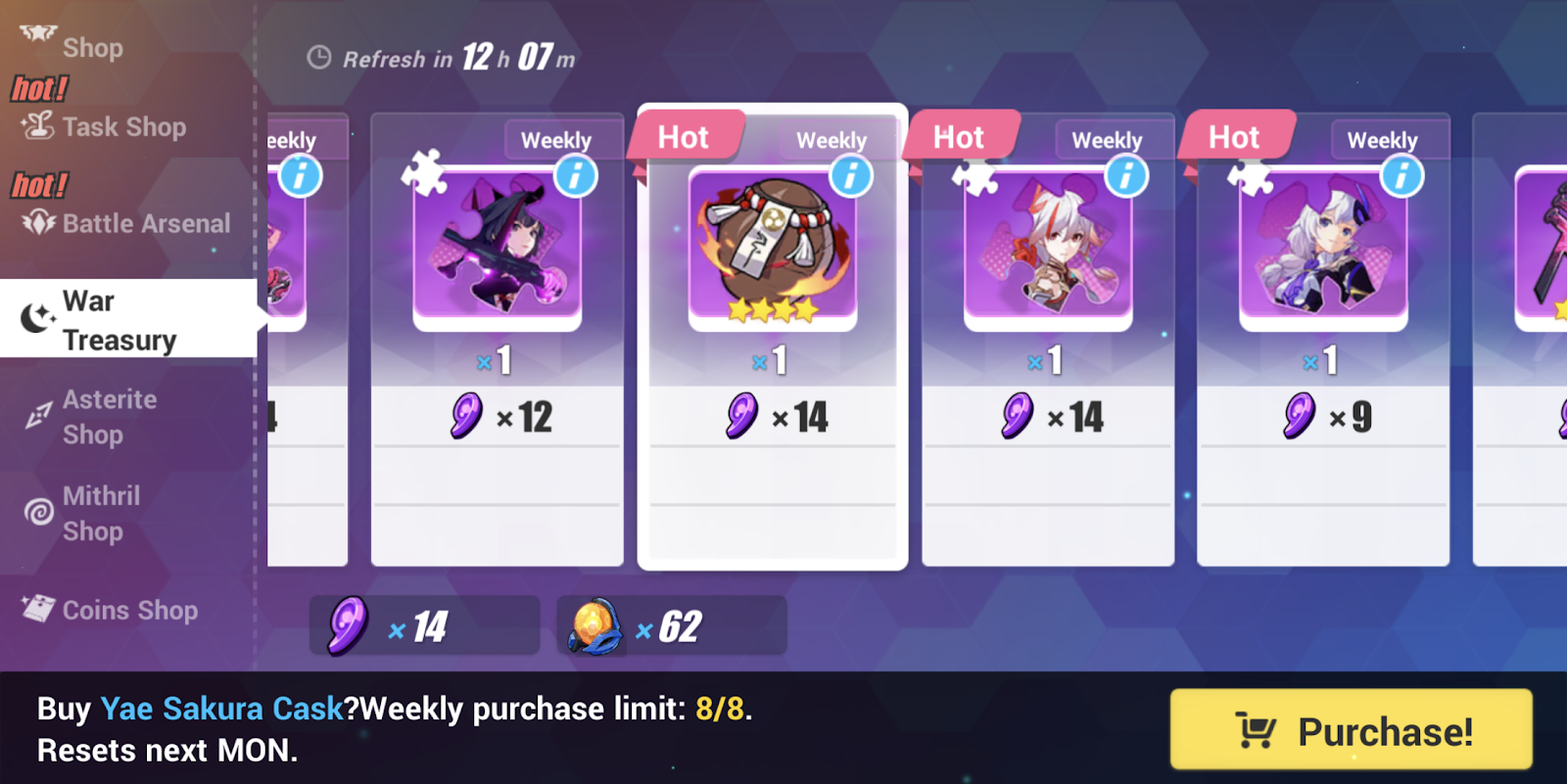 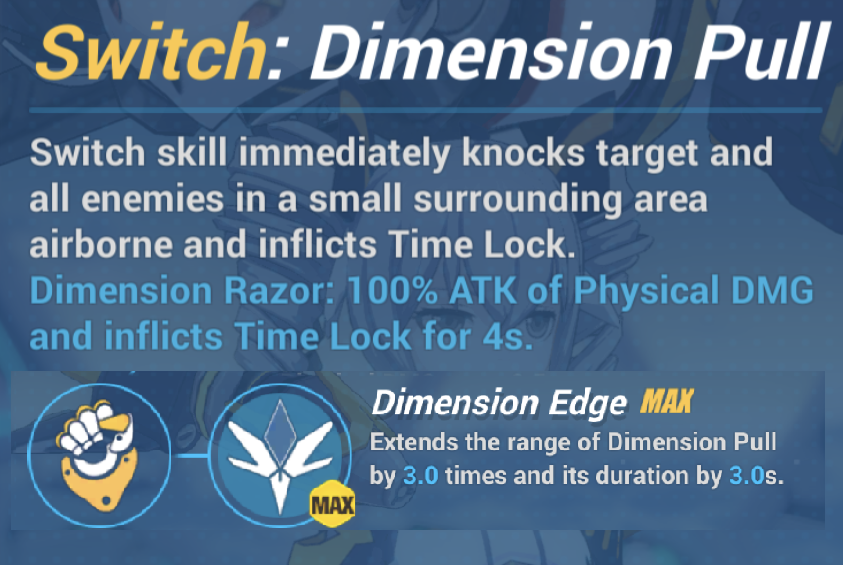 DB's Switch Skills are easily her best skills. When she tags-in, she timeslows and lifts all enemies in a small AOE. This not only immobilizes multiple enemies, but also extend any other status ailments (freeze, impair, etc.). To top it off, her cost-free, nearly-instant timeslow, lifting (and easy bleed), switch in makes it very easy to trigger many other valkyries' QTEs.

DB also has an additional part of her switch skill that makes her attacks much stronger against the time-slowed. DB can best take advantage of this skill by doing quick bursts of damage before the time slow wears off.

However, DB's QTE is very weak and not advised for most situations if you plan to inflict massive damage. 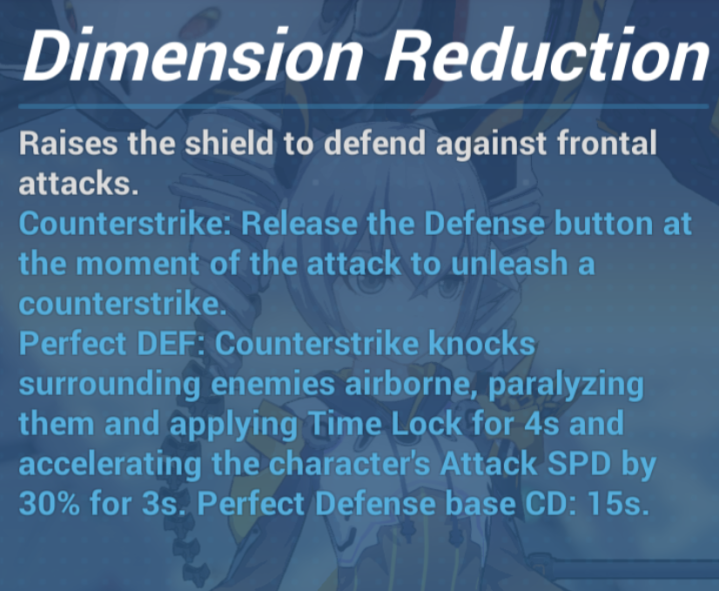 While not as good as her switch-in, DB's Perfect Shield Ult-evasion can also induce time slow and lifting, with the occasional paralysis. Her Perfect Defense can affect enemies from far away so as long as she counters their attacks perfectly.

DB has an ss-exclusive skill that helps her gain SP. This is very helpful for being able to use weapon skills such as the Hand of Tyr's without needing to stay out for too long. This isn't mandatory but rather something one can enjoy if they ever rank up DB.

This skill is shared with Bronya's Herrscher of Reason's Build Reboot Skill. If you wish to provide HoR with more consistency, then it's advised to get this SS-rank skill.

DB has an alright leader skill. While not the best, her leader skill is good for long lasting stages that require more SP. 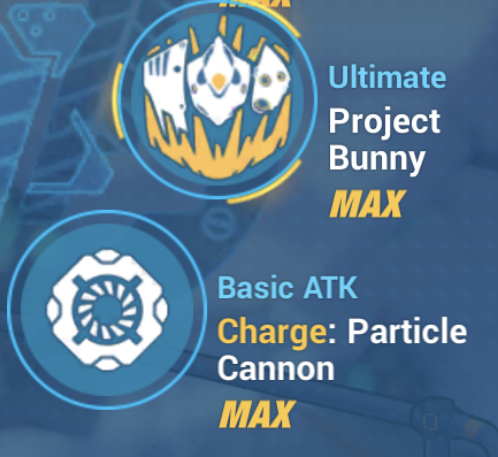 DB's ultimate and basic atk skills are geared toward laser attacks. Unfortunately, laser attacks are not very strong. It's not advised to have DB stay on the field and use lasers nor waste her SP on her ult. The only time you wish to invest in these would be when you want to DPS with DB. Keep in mind that DB does partial fire damage.

Recommended Gear
Because lasers are one of the worst types of weapons, DB's ult and basic skills are very subpar as a result. However, DB is a top tier support sub-damager that should pop quick strong bursts of damage before QTE-ing into another valkyrie. As a result, there's really only 1 set of gear/strategy to utilize DB.

Set Explained:
This set is best with Hand of Tyr, Schrodinger T, Mei: Beach Party, and Isaac Newton B. Schrodinger T provides a 50-50 chance of buffing basic attacks up to either 52% or 205% every 6 seconds while both Mei Beach Party and Newton B applies debuffs to a single target. And the Hand of Tyr does 30% more damage to shields. In addition, the Hand of Tyr's weapon skill instantly shoots out 3 artilleries without charging. This weapon skill counts as a basic attack.  This is perfect for DB to shield break and apply debuff.
To use this set, have DB quickly switch in, apply time slow (she does 80% more damage to time slowed enemies), use her weapon skill (costs 20 sp) to proc her stigs and shield break. Then switch out to the next valkyrie, preferably via QTE.

Substitutes:
There are other possible substitutes to the set above that will produce a similar but not as good as enough of an effect.

Planck M is a good substitute for Mei Pool Party because it increases the user's physical damage for basic attacks by 51%. While it doesn't apply debuffs for the team, it's allows DB to deal a bit more damage instead.

Planck B increases the user's attack speed so DB can charge up her basic attack up to the 3rd shot really fast in times that she lacks SP to use Tyr's weapon skill. However, it's to be paired up with Planck M so the 2-set effect of buffing Bronya's ranged attacks is included.

Beethoven B provides the user with more SP every once in a while so DB can use her weapon skill more reliably.

Set Explained:
If you still wanna get spicy and have DB be the main DPS with her lasers-built in skills such as her ult, you can run her with Book of Fuxi and Thales TMB. Make sure the weapon is in lighting cluster bomb mode before you ult so you can have an auto-impairing laser for the duration of the ult. Thales increases her Total DMG (so even her partial fire damage is buffed) while also providing sustainability. Please also keep in mind that because lasers can only do so much, this set for DB will only get you so far in the late game content.

Michelangelo M and B both increase crit rate and crit damage respectively based on number of hits. Lasers can easily make many hits and make good use of these 2 stigmatas. In addition, their 2-set effect has a total-damage multiplier increase of damage that benefits the lasers.

The Quantum Destroyer Type-II and Core Evoker Delta are both considerable laser options for DB as well.

Set Explained:
This set is designed to utilize DB's laser capabilities since the only suitable cannon for DB is the Hand of Tyr. Because attack speeds do not matter for this set, only damage increase is focused here.

Substitutes:
Because they are 4-star only gear, there are only so many 4-star gear that can still work with Dimension Breaker. Here are some of the following:

This event-only stigmata Bronya Magic M is another option to increasing Bronya's damage.

Cathode-07 is another laser similar to Cathode-09. It also comes with a weapon skill that creates a small move slow field around the user slows any enemies nearby.

Recommended Teams
Dimension Breaker is a top tier support sub-damager valkyrie. And since she can easily time slow and lift enemies (sometimes paralyze), she can help trigger a large arsenal of valkyrie QTEs. Time Slow also extends status ailments such as impairment and freeze. As a result, she works with so many physical-based teams that enjoys easy QTE entry and shield break.

The main DPS of this team is Snowy Sniper while DB is support and sub-dps and Celestial Hymn is support. This team can have SS replaced with another main DPS such as Herrscher of the Void or Night Squire in which they would be the leader instead. You can also replace CH with Valkyrie Ranger, preferably with pistols that can impair. This team works in a simple rotation. Have CH gather with her ultimate. When gathered and presumably impaired, switch to DB to invoke Time Slow. Then immediately use the Hand of Tyr's weapon skill to splash damage shield break. Hold your shield up asap the moment the 3rd artillery leaves your cannon so you can avoid the animation recoil. From the DB switch in, lifted enemies also help trigger SS's QTE. Immediately QTE to SS to apply a freeze and some damage.

Once you are on SS, ult so you can apply a debuff (ss+ rank only) to the frozen. Then attack with SS until the frozen ult wears off. From there, you can continue to use another ult from SS or repeat the cycle once again starting from CH.

Suggested Game mode
While DB isn't much of a contender in Memorial Arena, she does excel in Q-Singularis and Dirac Sea. Following the concept of a quick switch in, to crowd control and quick-burst in damage before switching out, she wastes no time in helping set up for killing multiple enemies easily.

DB is also a good niche pick against certain stages of Apotheosis. For example, she's good in stages that promotes Low Combo, during Time Fracture (via paralysis QTE), Ranged Damage. Since she can do all of the following, she makes a good pick as a MECH DPS.

Conclusion - Thoughts on Dimension Breaker
Dimension Breaker is a Valkyrie that can link with many other valkyries' QTEs. In addition, she has a unique style that stays on the field for as little as possible and still makes a large impact. Her laser playstyle isn't too strong so it's better to keep her as support for her Switch, Evade, and Leader skills. DB used to be a must pick for the original Infinity Abyss, but now, she's more of a good pick for today's game modes. She may appear to be lackluster, but her support still provides one of the shortest rotation times in the game. 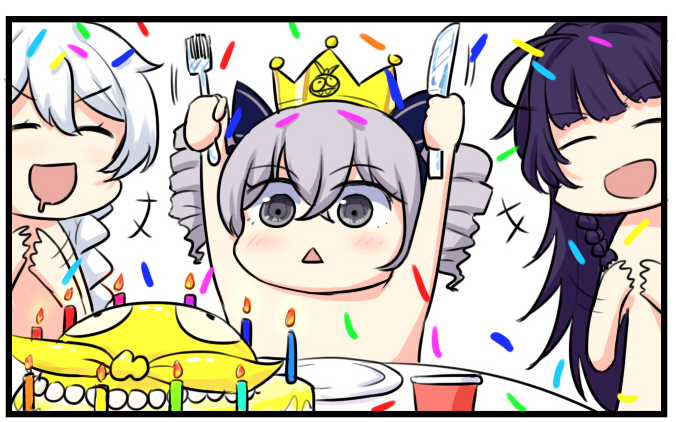