VP is a Lightning Psychic DPS who excels in both Memorial Arena and Dirac Sea with the right gear and support.  You will need the cross Oath of Judah to unleash her maximum potential.

Why is Judah so important? 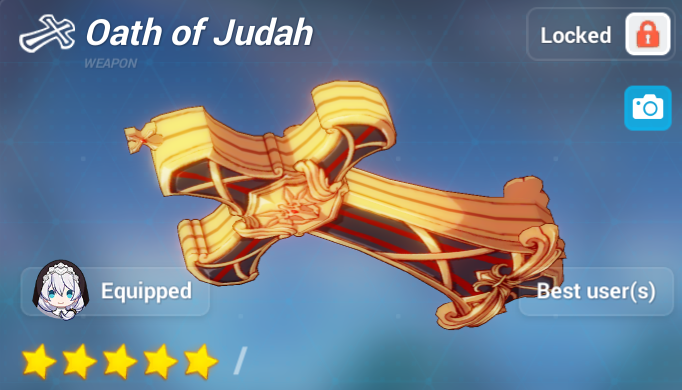 Valkyrie Pledge is not a very powerful damage dealer herself. On the other hand, when Oath of Judah marks an enemy, they take an additional flat lightning damage per hit they receive. This mark stays on the enemy even if VP is swapped out, and the damage it deals can be boosted by buffs. By marking an enemy with Judah, it is possible to deal extremely high amounts of damage by buffing lightning damage and hitting the enemy rapidly. Therefore, Judah is the most important gear for VP. 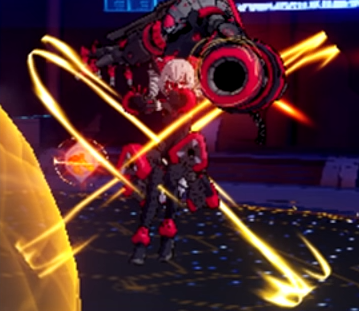 Example of enemy tagged by Judah. 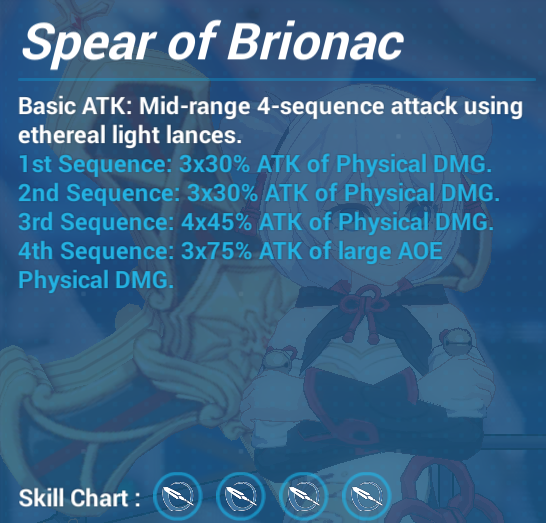 VP’s basic attack combo is a 4 sequence attack.  You will be using this to stack hits and combo on enemies.

Holding down attack will trigger VP’s charged attack. You can do this before, during, or after basic attack sequence.  At SS rank, after 50 combo (up to 126 combo), the charged attack will deal bonus lightning damage. However, it will reset the combo to 0 so it is best used as a finisher. 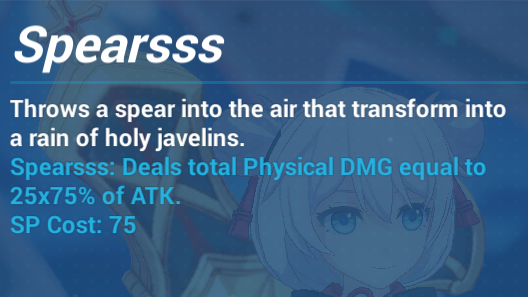 VP’s ultimate throws spears at the enemy and deals physical and lightning damage.  It has the ability to impair the enemy and reduce their defense by 80% but impairing enemies is not the main purpose of her ultimate.  Rather, it is the damage aspect that most people use the ultimate. The ultimate will also help stack combo so you should use it before your charged attack. 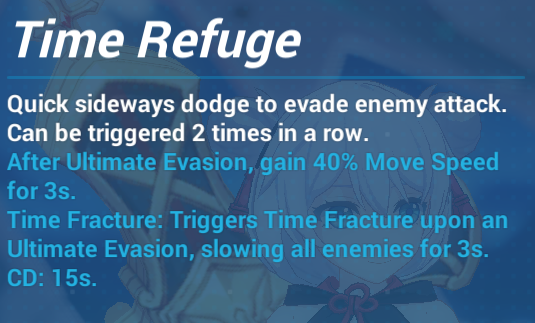 VP’s ultimate evasion triggers time fracture (up to 5.5s when maxed).  This is very useful in Memorial Arena. Her SSS skill, Grace, will increase active damage of the cross by 30% but this does not apply to Judah’s mark damage.  Also, the increased damage applies the next deployed cross after ultimate evasion. Hence, the skill is slightly helpful but not going to change how you play VP.

VP’s QTE is trigger upon freezing an enemy.  This will allow her to time fracture and doing massive physical damage.  Warning: this may knock back enemies and knock them out of range.  You can cancel VP’s spears from the QTE by dodging while keeping the time fracture effect.  This is useful when you do not want to knock the enemy super far away.  Hubble top on LE can freeze enemy to trigger QTE.

VP gets up to 30 SP at the start of fights allowing her to use her cross immediately.  Additionally, she gets increased attack speed after using cross which is great for stacking combo.

A Rank – VP’s base rank which she is usable but is missing quite a lot of her important skills such as extended time fracture, other damage bonuses, and no QTE.

SS Rank -  95% of VP’s potential , VP gains Charged attack bonus damage which is great as a finisher.  In Memorial Arena, it can deal almost a fifth of a boss’s HP.

Let’s start with the optimal set-ups.

Optimal Gear: Judah is a MUST.  There really isn’t much to compete with Judah for VP.

Her stigmatas are more variable.  These four set-ups are all optimal depending on situation but are pretty similar in score in Memorial Arena.  The only exception is do not use Jingwei top if there is more than 1 enemy.

Otto bot is basically always the best on VP.  If you want to use Thales or Caravaggio, you really want the 2 set for maximum damage but each individual stigmata still give some bonus damage.

If you do not have these stigmatas, here are some gacha substitutes:

Top:  If you do not have any of the tops or you cannot use Jingwei top because of multiple enemies, Zorro top is ok.  However, Origin top (non-gacha) is just as good in that case.    Middle: Anything that gives total damage or lightning damage such as Monet Mid and Nagamitsu Mid.
Bot: Tesla Band Bot or Newton Bot are good substitutes.

Even as F2P, YOU WANT JUDAH!
If you do not have Judah, all non-Judah crosses have similar performance. Without Judah, VP's damage potential drops a lot and becomes more physical rather than lightning based, so adjust stigmatas accordingly. The only free lightning cross is Lightning Angel which is her best 4* cross. 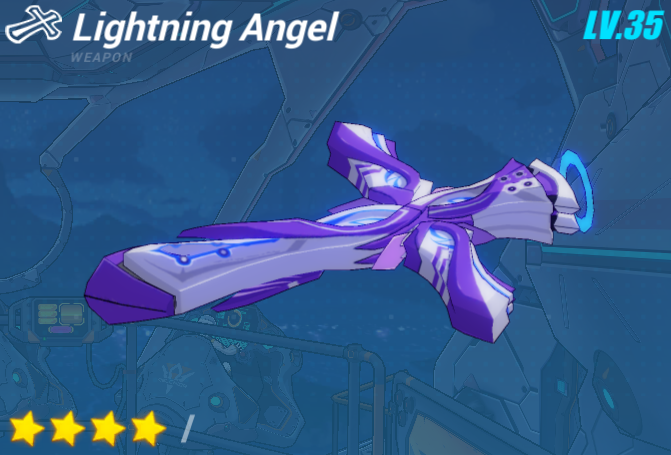 F2P Stigmatas Sets. There are quite a few decent F2P stigmata sets for VP.  Depending on the situation, these are good ones to consider.

Origin Set – Cross Weapon DPS/Support set, I would say this set is better used elsewhere because the 3set effect is also a support set.  However, it can be used on VP for some DPS but less than other F2P sets.

Mixed Set – Best for single boss Memorial.  Jingwei top is only for single boss so if there is more than 1 enemy, you need to use Teresa Origin Top.  Higo Formals is good elemental damage and Darwin bot is total damage upon ultimate evasion. However, Shigura Kira Bot is also usable in this setup.

Best Support in MA: Lightning Empress (LE)  gives SP as leader skill as well as a chance of applying conductive on hit which increases lightning damage by 70%.  Uses Raikiri or Pledge of Rain to get more hits on Judah to increase damage. Typically, you want to use LE to apply conductive debuff before switching to VP and using Judah.
Ideal Support Gear – Elemental Support gear, Jin Shentang TM + Newton Bot gives the most elemental damage buff to Judah. Jin Shentang cannot stack but Newton Bot can.  Tesla Band Mid gives 15% ally lightning damage which is another good option for supporting Judah.

Depending on your equips, team, and the boss, one of these valkyries and stigmata sets can be a good support option.  Typically in Memorial Arena, Divine Prayer is the best choice but you need a lot of gacha gear including Thunder Kikaku to one shot the boss. If not, Wolf’s Dawn (SS+ rank) provides elemental damage bonus with her barrier and can use laser to trigger Judah.  Kriegsmesser and other Greatsword users can use Blood Dance to increase the elemental damage of Judah, but it is not commonly used in Memorial Arena unlike Dirac Sea.  Lastly, Phoenix can be a good support or side-DPS along with VP.

If the enemy can be frozen, Hubble top can instantly freeze the enemy allowing for VP QTE.  It is recommended on Lightning Empress if applicable.

Here are 2 examples of High Scoring Judah Teams in Memorial.

kaq does 2 rotations with his team to kill RPC.  LE starts by applying conductive and uses weapon skill while VP uses Judah and attacks.  After VP’s ultimate evasion, WD uses her QTE to continue the time fracture and attacks to deal Judah damage.  After WD’s ultimate evasion, the rotation repeats with LE again. The second time, VP uses charged attack as a finisher before switching out to WD.  This deals extra damage allowing for 2 rotation kill. 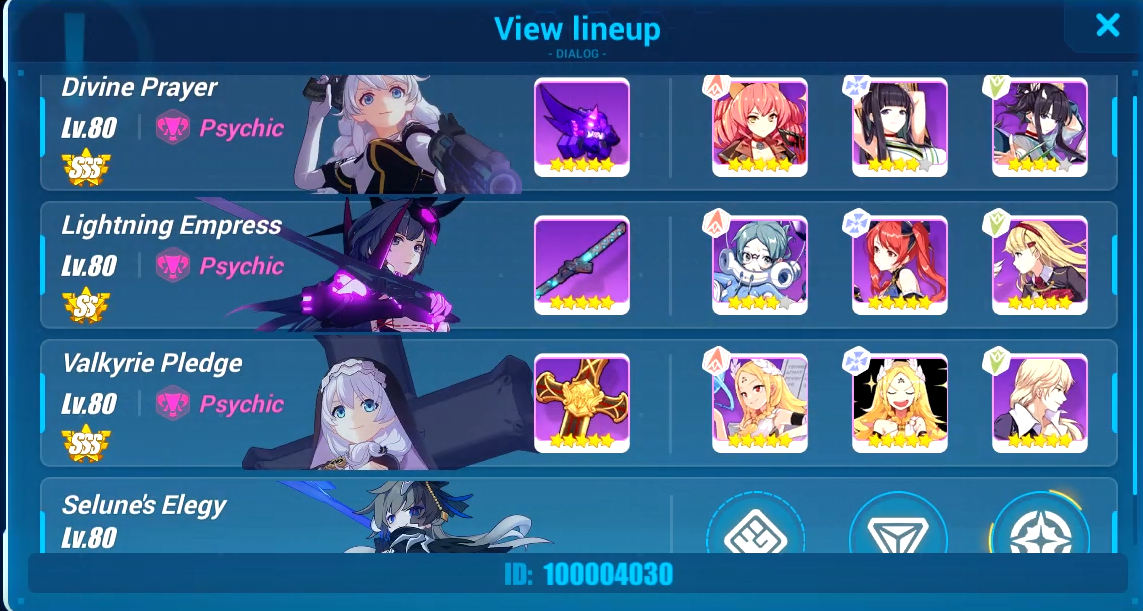 Start with LE to freeze Hellmaru, apply conductive and Newton bot, and use Raikiri’s weapon skill. Next switch into VP via QTE, Judah and ult for massive damage.  This brings Hellmaru down one bar which drops a SP orb. Pick up the SP orb up so you can use Divine Prayer’s ult.  With this, you have enough time to wait for cooldowns and apply conductive from Thunder Kikaku.  Finally, repeat the cycle again starting from LE and into VP. Have VP attack a bit before doing a charged attack to finish Hellmaru. Note that because VP has equipped using Thales top/mid, her charge attack does extra damage. 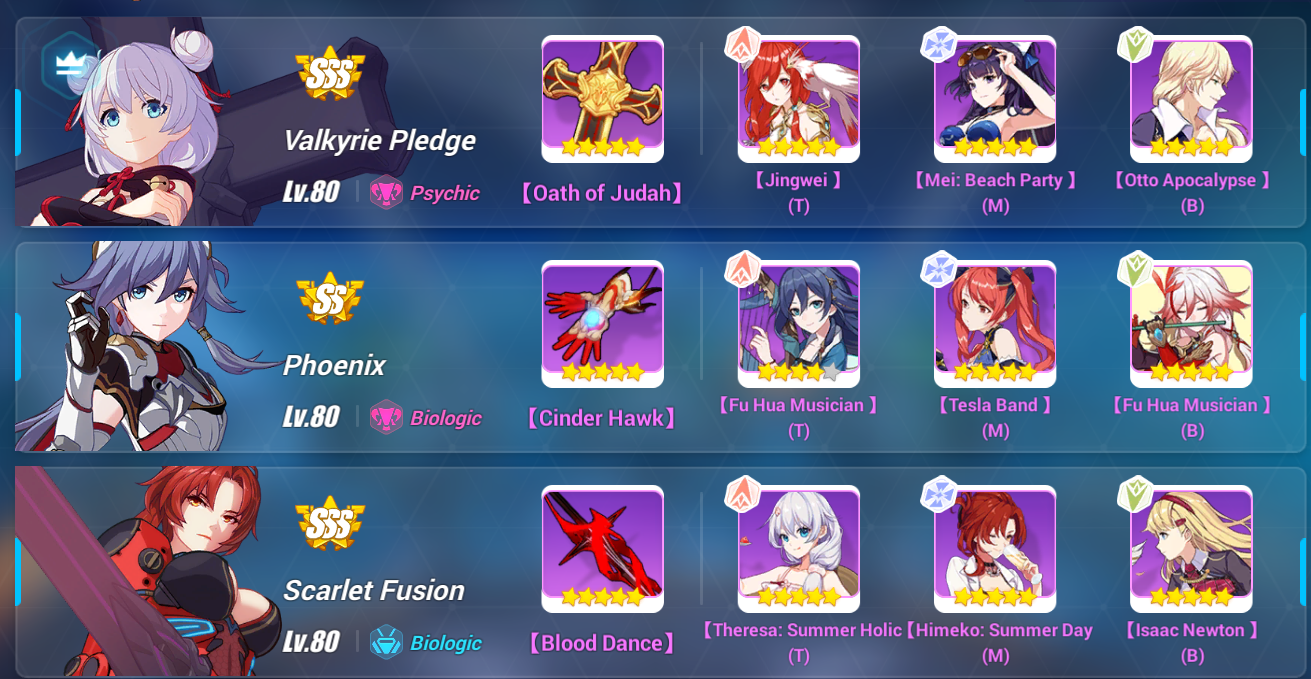 Because Dirac Sea’s RPC is tankier than its Memorial Arena variant, you need multiple rotations.  Therefore, this team is suggested. SS Phoenix is used to buff elemental damage by charging her Prajna bar (red bar above HP) and deal a bit of fire damage.  Scarlet Fusion is a support in this team. She uses the blood dance weapon skill to increase elemental damage taken by the boss. VP deals most of the damage through Judah. Rotations typically consist of Phoenix evading attacks and charging up her Prajna bar with combos, followed by Scarlet Fusion using blood dance active, and then VP using Judah and attacking. Phoenix can use ultimate to help dodge or get into range.  VP should ultimate at a good opportunity such as after ultimate evasion.

WARNING: SOMEWHAT DIFFICULT. There is an advanced technique where you can cross and ultimate at the same time. This is useful in Dirac Sea or Memorial Arena where every second counts.  To do this, you need to press cross followed very quickly by ultimate. This may takes a lot of practice.

Conclusion: Valkyrie Pledge is a Lightning Psychic DPS that has the potential to be top tier in both Memorial Arena and Dirac Sea. To make VP’s competitive, Judah is necessary and it is worth farming VP at least up to SS rank.