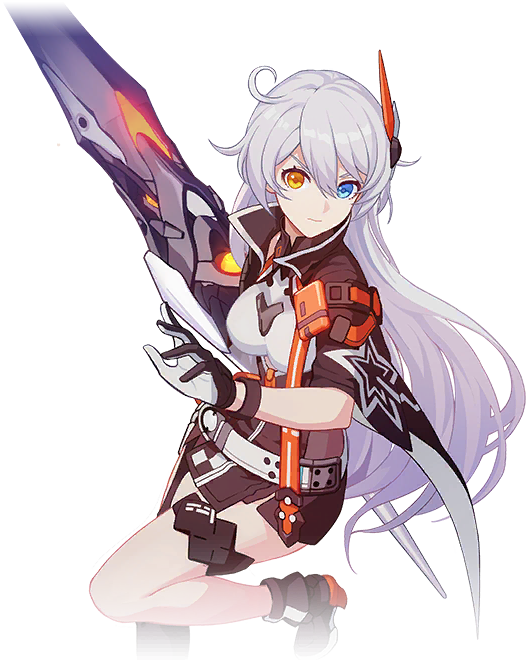 I.    Overview
Void Drifter is an augmented form of A-ranked Kiana Kaslana's Valkyrie Ranger, the same as Mei's Striker Fulminata and Bronya's Drive Kometa. To upgrade, you need the Epiphanion (Drifter Core) and Smelted Core.

Void Drifter comes with an additional Honkai power to bash the enemies, brought by what's left of Herrscher of the Void's power in Kiana's body after she returned to normal (I assume you already know about what happened to Kiana and Himeko in story chapter VII).

Pretty much the same as Valkyrie Ranger's normal form, which is specialized at shooting from distance and creating black hole to draw enemies in 1 place. Different is, now Void Drifter also gains a new and powerful melee attack, making use of what's left of the Honkai power inside her body. Downside is, using too much of this Honkai power will make enemies around you and Void Drifter herself to be stunned. Yes, every enemies around her, including herself, are stunned for a majestic 3 seconds. Sounds ridiculous right? But it's useful in its own way, and this will be explained later.

“Then how am I supposed to use the Honkai power if all I get is stun?” Good news for her, “An Ultimate a day keeps the stun away”, which means that her Ultimate will clear all her disease instantly, even when she's stunned. Bad news is, the Ultimate is costly (100SP), so it's actually not a pretty good solution. Since her medicine is very expensive, always keep her balanced between ranged and melee attack.

This guide is built to provide readers a better understanding of Kiana Kaslana's Void Drifter augmented battlesuit. Readers can find out more about Void Drifter's best equipments, her skills, and how to best play her in the game.

II.    Skills
Most of the skills are the same with the normal Valkyrie Ranger form, but some of the branch skills are augmented, which means it either get buffed, or even changed altogether. Also note that her new augmented skills cannot be upgraded like normal. Instead, you have to level up the Core Augment (from 1* to 6*), and the skills will be automatically upgraded.

Void Drifter's skills will be explained below. 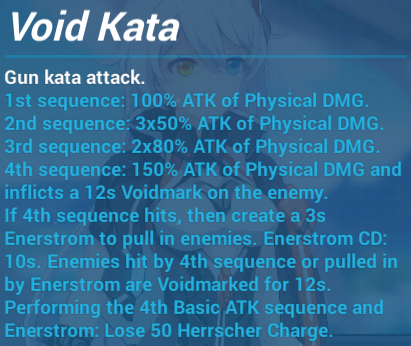 Basic Attack that score a critical have a chance to bleed enemies.

Triggered when enemy is impaired. Knocks enemy airborne while damaging them, and inflicts a 12sec Voidmark. 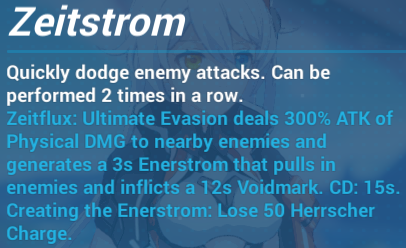 This skill is very useful for either carry or supportive role. By filling the Herrscher Gauge to the max on purpose, everyone in the team gains Total Damage Multiplier buff. 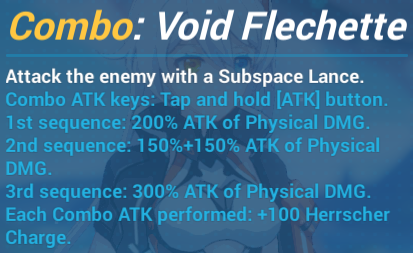 When Performing Combo Attacks, gains Ignore Interrupt and increased Defense. As long as you have unlocked this skill, you will almost never be interrupted when using the Subspace Lance.

Kiana jumps and slams the ground, dealing huge damage and resetting her Herrscher Charge. That's it, nothing else. Pretty boring, if I must say.

Keys of the Void

Keys of the Void increases both Physical and Critical Damage, not only perfect for Herrscher of the Void, but also suitable for Void Drifter alike. The active skill is not that useful for Void Drifter, so better if you just leave it alone.

For Memorial Arena, this weapon is a great asset, since at max level, it gives 15% Physical Damage + 50% Total Damage Multiplier for 5 sec. 5 seconds is more than enough to blast the enemies with her Subspace Lance.

Like her normal form, Mjolnir is also a great choice for Void Drifter, since she can pull enemies into one place, cast the Weapon Skill, and bam. Enemy defenses are decreased by 80%. When immediately followed by Combo Attack, she can deal tons of damage. Mjolnir also increases Critical Rate, so this is a great choice.

Everybody knows about Attila, especially its B part, which increases a huge 31% Physical Damage. Even in late games, the B part is might still be used, and it even beats the 5-starred Fu Hua: Pride (B), which only gives 30% Physical Damage.

Though the T and M part are not worth mentioning, when all 3 sets are equipped, you gain 30% Critical Damage and 40% CRT (different from Critical Rate, see another guide about CRT). Since Void Drifter's Critical Rate is very high, these passive skills are very useful.

Instead of going for 2 or 3 Stigmata Sets, sometimes we only want the singular buff in each part of Stigmatas. Naoe (T) gives you Total Damage Multiplier / Critical Rate, while Bathory (M) and Attila (B) gives you Physical Damage.

I myself prefer this over the Attila Set, since increasing Raw Damage is better than Critical Damage. You won't strike criticals everytime you attack, even if it's frequent enough, and Raw Damage will also buff your Critical Damage, in case you do a critical.

The most recommended Stigma for Void Drifter. Since she needs plenty of SP for her Ultimate (100SP), Schrodinger Band is the perfect choice. You might want to change the Middle part to Ekaterina (M) or Plank (M).

Like Schrodinger Band, Zorro is able to recover plenty of SP through by evading (especially the T part, it recovers 3SP per evasion). When you equip Zorro at least 2 sets, for every 10sec (won't occur if there are no enemies around), a light from heaven shines upon your character. When the light goes small, tap on the Evasion Button to do an Ultimate Evasion (will be a Normal Evasion instead if it's on cooldown). Both Ultimate and Normal Evasion can trigger the T part buff to gain an additional 3SP.

Zorro is incredibly useful if the enemies somehow won't attack you, but you want to trigger Void Drifter's Ultimate Evasion to create a black hole. This is where Zorro's skill comes in.

When equipping Ekaterina, you need to keep your Combo Hit Counts high, by always prioritize evading rather than always attacking, and never let yourself get interrupted. Since Void Drifter's Attack Speed is pretty high, reaching 70 combos won't take long, and you can enjoy the 120% Critical Damage. What's more, it's free; you can get it at Bounty Mark at v3.3 and above.

IV.    Line-ups
Void Drifter's line-ups depend on whatever you want her to be, but mostly, especially in Memorial Arena, you play her as carry. You might want to bring Divine Prayer, Yamabuki Armor or Celestial Hymn, since 3 of those can inflict impair on enemies, triggering Void Drifter's QTE. You can also bring Drive Kometa for the 10% Critical Rate bonus and 25% Melee Physical Damage (for her Subspace Lance) as long as her shield is active, but she won't inflict impair like Yamabuki Armor, so you have to bring other Valkyries that can impair enemies.

Drive Kometa's leader skill increases Critical Rate, perfect for Void Drifter which mains on Physical and Critical Damage. Accompanied with Divine Prayer abilities to passively impair enemies by 80% every 10sec, Void Drifter is as deadly as her former self, the Herrscher of the Void.