INTRODUCTION
HERRSCHER OF REASON is Bronya's new Mech-type battlesuit, harnessing the power of Core of Reason that she acquired in Sea of Quanta.

S-rank HoR is considered a Tier 0 DPS valkyrie, because

This guide aims to be a one pit stop guide for everyone to learn both basic and advanced ways to operate S-rank HoR. So sit tight, buckle up and get ready for the ride of a guide!

SPECIAL MECHANICS
Before we get into her basic attacks, you must first know HoR comes with a few special mechanics.

Analyze debuff
Some of HoR skills can apply Analyze debuff on the enemy, marked by a blue circle. When an enemy is Analyzed, it will immediately freeze for 1.5 seconds. Furthermore, HoR will deal 40% more total damage against Analyzed enemies! 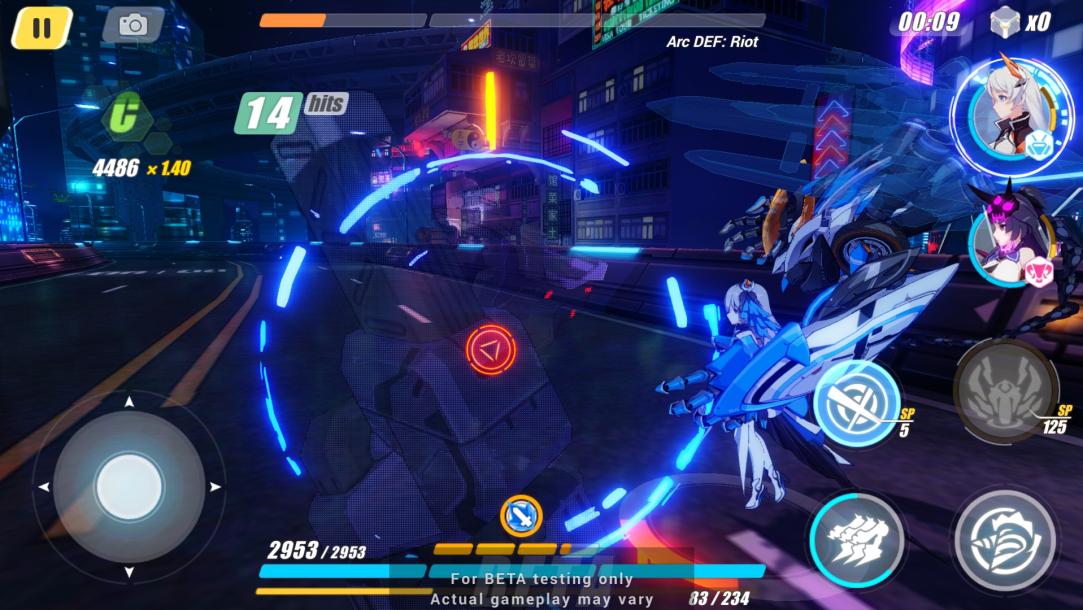 Konstruktyom meter
HoR can acquire special meter called Konstruktyom, which enables her to use charged attack. One bar has 120 points, and maxes at 4 bar with 480 points.

Make sure you remember these two unique skills; they will be mentioned a lot in the next sections. Now let's get to HoR's basic attack.

BASIC ATTACK
Basic attack consists of five-sequence melee attacks, dealing a mix of physical and ice dmg. The last sequence is very important - it's a multi-hit drill attack which provides a lot of buffs:

Basic attack is your main method to gain Konstruktyom for charged attack and SP for ult, so make sure to do the full attack sequence. Matrix shield makes you very durable, so don't be afraid to be in melee range and keep punching the enemy.

The firing mode varies according to the Heavy weapon you equipped, but each barrage will always deal a total of 660% ATK ice dmg (before damage calculation).

Gif 3, 4 and 5 show the different firing modes of Cannon, Missile and Laser weapon

MAX damage output
Basic charged attack is very strong. It is your major source of damage outside of ultimate. Here's a few guidelines to make sure you maximize its damage output.

1- Fire at least 3 charged attacks!
Every charged attack increases your ice damage by 15%, up to three times - to a whopping 45% increase in ice dmg! This damage boost only lasts until your final barrage. So you should always fire three or four charged attacks!

Table 1 below shows the damage increase for each barrage in the gifs above. Third cannon's dmg is 3.5k higher than the first one!

3 - Fire at close and medium range
Herrscher form ends one second after you fire the final charged attack. Cannon and missiles take time to reach the enemy. If the enemy is too far away, the final hit won't land before Herrscher form expires.

To avoid this, fire your charged attack at close-range or mid-range. Also, control HoR's movement while firing - otherwise Bronya will recoil away, further increasing your distance on subsequent charged attacks. 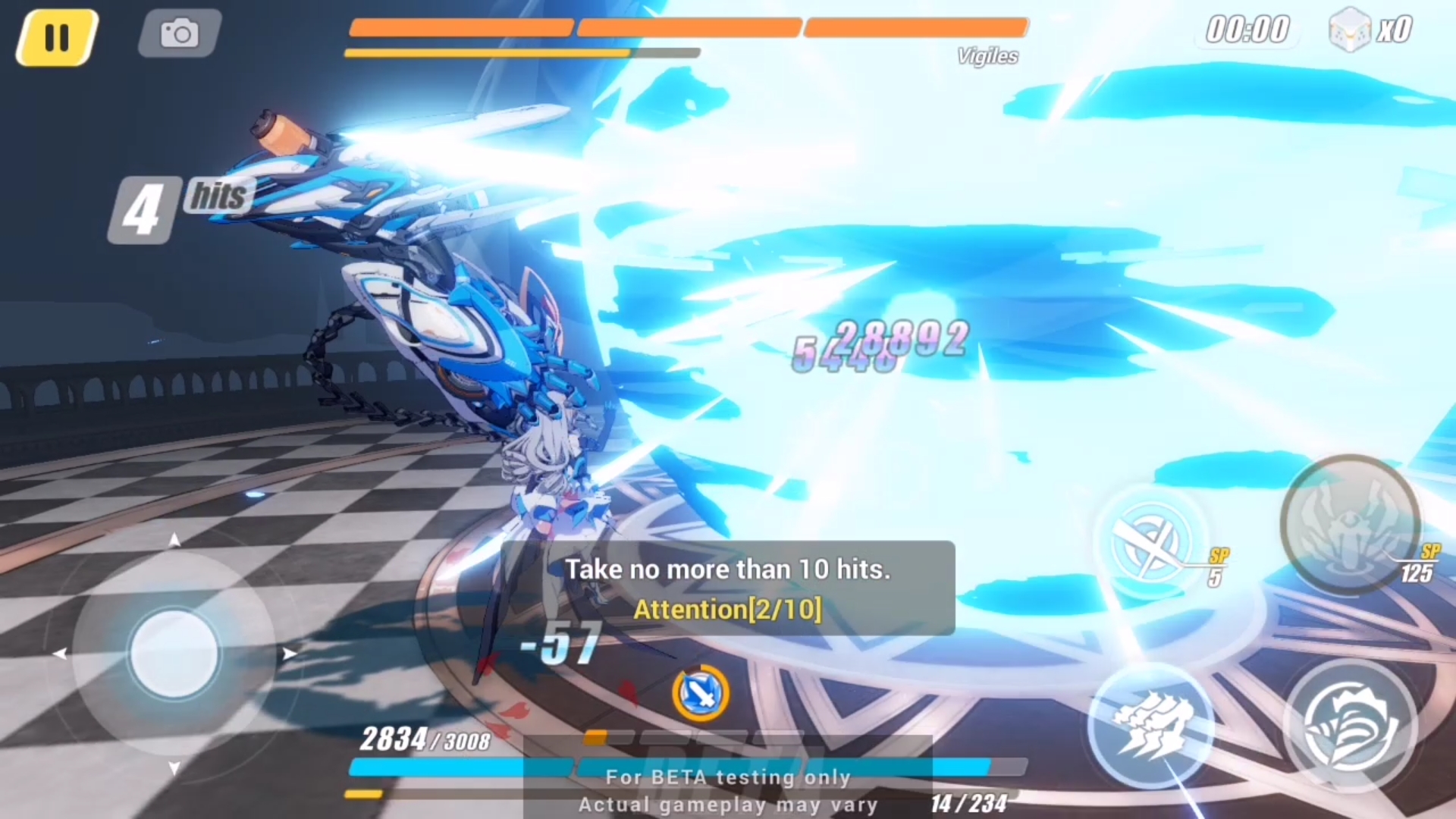 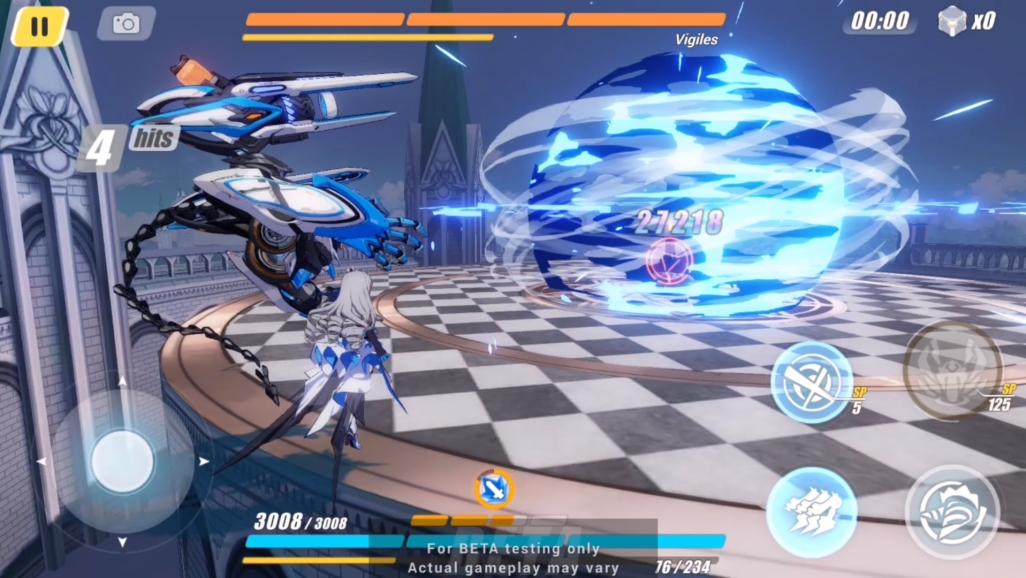 By now you should have a clear picture of your pre-ult rotation.

OTHER SKILLS
Before we move on to HoR's ultimate ability, let's take a quick look at her other kits.

Yes, it is a broken leader skill.

Passive
I already covered Konstruktyom and Analyze at the start. Now let's look at the subskills.

Special property - Emergency Brake. If evasion skill is not on cooldown, HoR can trigger evasion skill by tapping evasion button right after she is hit. This is a great escape mechanism to prevent enemy lockdown!

Note: Currently in v3.3, you can heal after ultimate evasion even when the skill is on cooldown. This is a bug and will be addressed in v3.4

Co-op skill
Inflicts all enemies with Analyzed debuff, causing them to take 30% more ice dmg and 100% ATK of ice dmg per second.

ULTIMATE - Ride On!
Captain, you finally have 125 SP - it's time to activate ult and RIDE ON!

When activating ult, some major changes happen at once

All your skills will operate differently - let's take a look at all of em!

BASIC ATK - Basic attack becomes Hover Gun that deals 4*65% ice dmg. Hover Gun fires automatically as long as you are moving and is in range of an enemy. This allows you to focus on other modes of operation - charged attack, evasion and your survivability.

CHARGED ATK -  By consuming 240 Konstruktyom, HoR will deal 2*250% + 2*300% ice dmg in an area, as well as Analyzing the enemy for 3s. This skill also penetrates through enemy's elemental resistance by 20% - especially useful against enemies in Q-singularis or Dirac Sea who boast high elemental resistance.

This is HoR's strongest attack! You should always maximize its damage output by buffing this attack and debuffing the enemy (eg with Blood Dance and Newton B)!

EVASION SKILL - Evasion skill lets you crash forward and deals 4*10% ice dmg. Besides retaining all its properties from the non-burst version, you can now also recover Konstruktyom when this skill hits an enemy. So spam it, regen your meter faster to do more charged attack!

When Usagi Kinetic expires, return to basic atk rotation and get ready for your next ult!

Key of Reason and Welt Yang set are HoR's best gears, as they provide her with the most buffs and utilities - and they all synergize well with HoR.

Key of Reason active and Welt 2 set both have timed buffs. When they are stacked correctly, HoR's charged attack can get up to 13x dmg multiplier!

When to use Key of Reason active?
Key of Reason's active deal tons of dmg, and provides 35% TDM for 7s after the final attack hits. And 7s is half the duration of Usagi Kinetic! However, it has a long 25s cooldown. So, only use the active for these situations only: 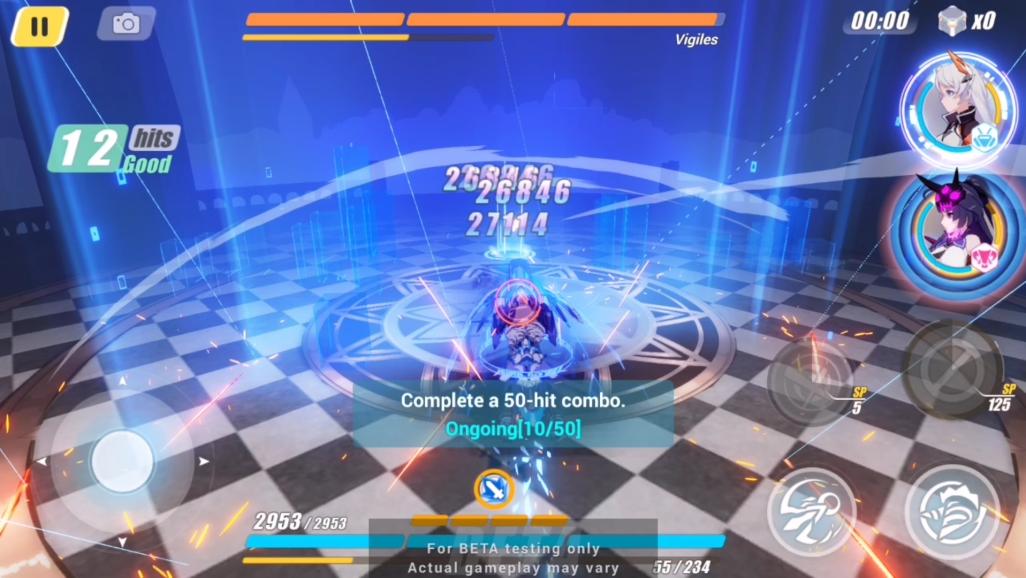 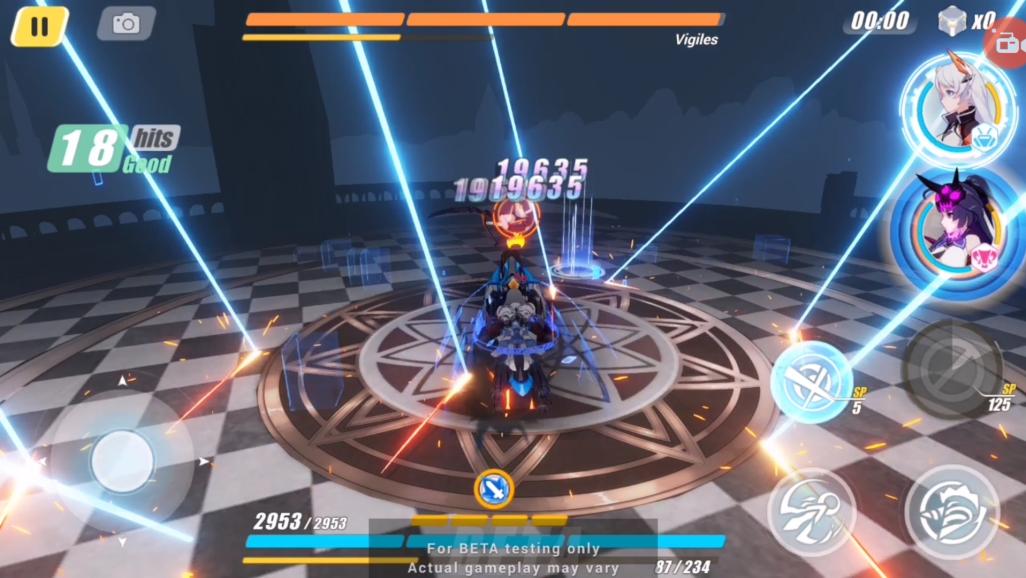 When to use Welt Yang's 2-set buff?
Welt Yang 2set provides 60% TDM to charged attacks for 5sec. This buff charges every 15 basic non-charged hits (HoR basic atk does 14 hits).
The usage is simple -  You should always fire three or four charge attacks at once to make use of the 5 second buff window. Hey, that's sounds like my advice up in charged atk section. It's useful here too!

Other Stigma Recommendation
HoR's skills give her a balanced mix of TDM and Ice Dmg.  Therefore, when choosing her stigs, you should get a set that increases both TDM and Ice dmg. 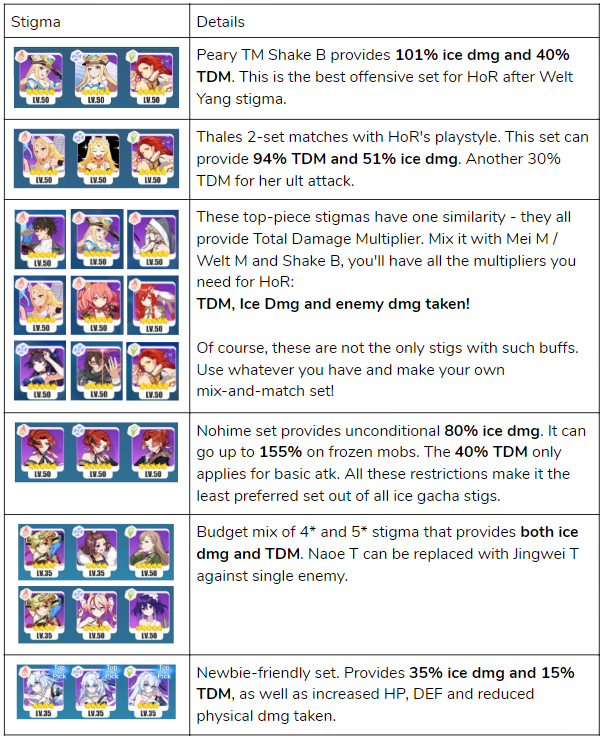 Other Weapon Recommendation
Unfortunately there's no weapon that comes close to Key of Reason. Just use any weapon with the highest ATK. If you still need a budget 5* weapon alternative, refer to this recommendation. 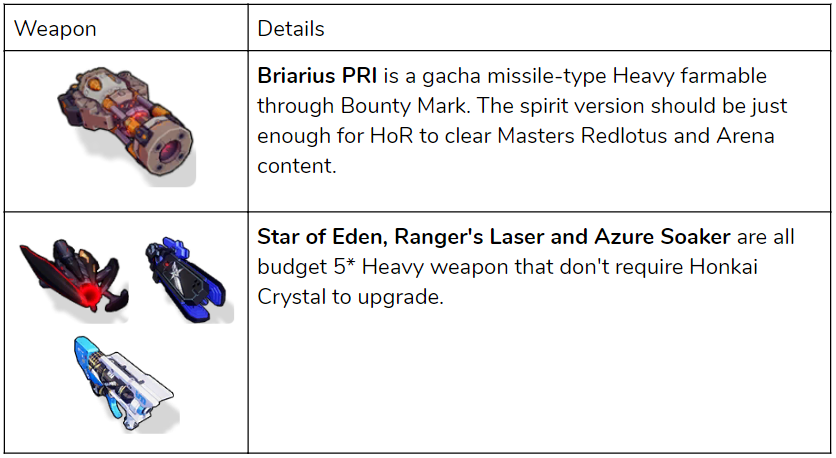 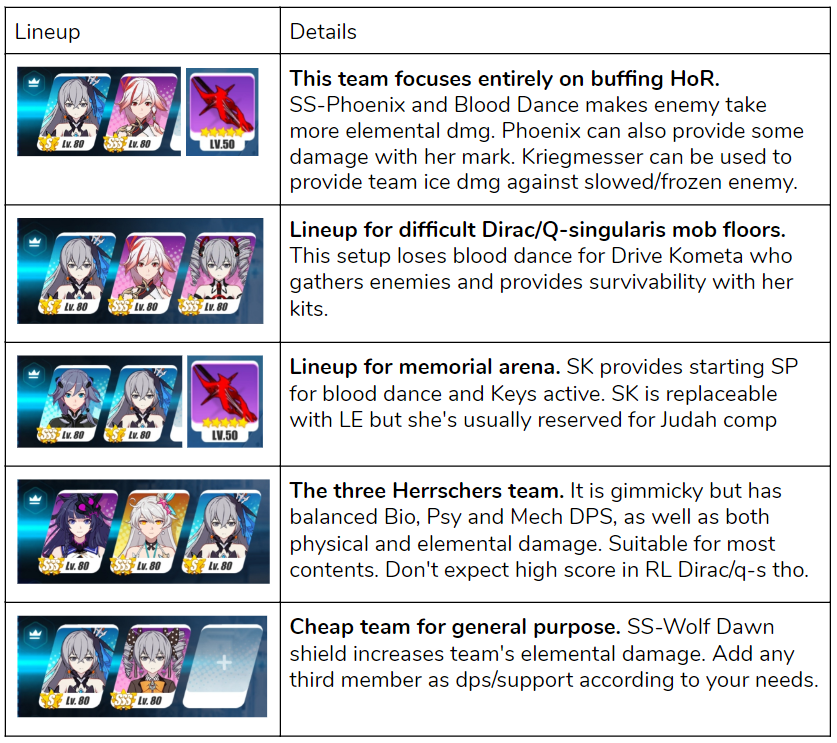 DIRAC / ABYSS
HoR can perform well in most weathers and all q-singularis buffs. She's made for this mode!

In SEA/Global server, you have a high chance of getting high score and promoting to myriad during ice weather or ice evadion buff. The only competitor you'll have is Argent Knight.

Her worst weathers are the ones that resist ice dmg and reduce ranged dmg. Drive safely during those weathers!

Here is how effective a fully geared and supported S-rank HoR in Memorial Arena - Masters bracket. Note that MA strats are always evolving and these scores may improve in the future. There will also be an Ultimate Tier (lv80-85) in v3.4. I'm sure HoR will be a good asset in that bracket with her sustained damage! 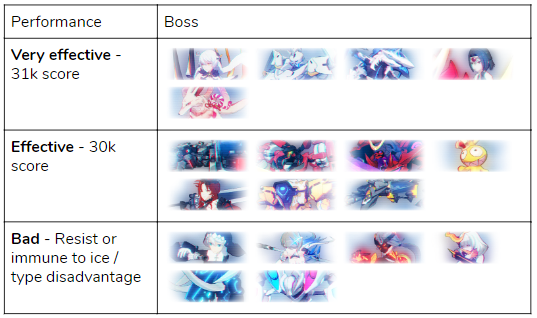 CONCLUSION
Congratulations, you've reached the end of this guide! Hopefully this has been helpful in your quest to master the operation of Herrscher of Reason. She will be a big asset to you in both casual and competitive modes.

If you have any more questions, hit me up at discord - Marisa#4065. Finally, watch this video to see how I operate Herrscher of Reason.

Thank you for reading. Bye!