Domain of Revelation (DoR) is the new PRI-ARM version of Key of Reason introduced in version 4.3. The Heavy Weapon is designed for Herrscher of Reason (HoR), buffing her and revamping her firepower for the meta-adjustment after a year since her release. Keep in mind that PRI-ARM weapons such as DoR are only accessible for Captains lv81+.

After taking in the Herrscher of Reason's core, Bronya has become ever more proficient in harnessing the power to rebuild, and also growing with time is her understanding of the infinite possibilities brought by this power. She now stands fully ready to protect her partners and uphold her promise. 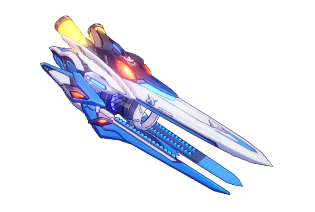 Divine Masterplan
Enables HoR's ultimate evasions to apply DMG and Analyzed debuff asap.
HoR's ultimate evasion skill has an extra effect that applies Analyzed debuff to those hit within 1.7s after the Ult Evasion. Before, HoR would have to quickly hit the enemy within those 1.7s to apply the debuff to deal more DMG with her charged Shots. Unfortunately, those rockets slow down in Time Fracture, so it would be hard to time that from afar. And even if HoR manages to apply Analyzed with her Charged ATK, only 2 of the 3 shots will enjoy the debuff since the first one needs to apply the Debuff.

However, with DoR, her Ult Evasions come with lasers that almost immediately apply the Analyzed Debuff (as denoted by the rings around the enemy in the gif). This ensurement of enemies being Analyzed means HoR players will only need to worry about connecting her Charged Shots. All in all, it's a good skill that increases the consistency of high dmg output from HoR.

Structural Truth
Applies Analyzed debuff in large AOE, boosts Wielder TDM, and restores 1.5 bars for HoR.
Before we dive into the specifics, one thing to note now is that the weapon's active no longer cost any SP (before 5 SP) and has a shorter cooldown of 20s in exchange for restoring 5 SP for ult-activation. This is very important in SP-tight situations where HoR is discouraged from using her weapon's active until after ulting. With its slightly delayed Analyzed infliction and 0 SP cost, HoR can now tap for weapon's active before ulting so the bike rush-down attack can also enjoy the Analyzed debuff. Do be careful when using it on enemies who can quickly escape from this delayed attack, such as Hellmaru and Herrscher of Void.

Like before, DoR's weapon active deals some Ice DMG and freezes enemies for 6s on the final hit. However, its AOE has been significantly increased, thus covering a larger range to freeze and/or inflict Analyzed on enemies.

One of the most important aspects of DoR is that it can restore HoR's Konstruktyom meter by 180 Konstruktyom (1.5/4 bars since max is 480) in 3s. To add another method of restoring HoR's meters enables her to keep attacking. And this skill works very well in favor with DoR's other skill for restoring SP, Total Analysis.
And because Structural Truth is free to activate with a smaller cooldown, the wielder, especially if it's HoR, can activate the weapon skill in their current team rotation to enjoy the freeze, Analyzed debuffs, and Konstruktyom restoration without being thrown off-tempo. HoR can use the weapon's active to continue attacking and expect to be able to use it again on the next rotation.

Total Analysis
Increases TDM for Charged and Ult ATKs, increases HoR's SP recovery.
DoR's final skill is very good. Going from any attack's Ice DMG being buffed to just Charged and Ult ATKs via TDM means a lot to HoR. TDM does not drop off in DMG as much as Ice DMG does in the DMG calculations. Despite being locked to only Charged and Ult ATKs, HoR's main source of DMG (as well as any Bronya nowadays) deal their DMG via Charged and/or Ult attacks. So this restriction is a good trade-off.

The other effect of this skill is extremely important for HoR. Before, HoR had a hard time building up her ultimate in time or at least ulting for a second time without taking too long to build up SP. Now, whenever HoR uses up one meter and simply releases drill-rockets (does not need to hit enemy), she automatically gains 3 SP per rocket. This means she gets 9 SP per meter and potentially 36 SP have a unleashing her entire load of SP. HoR's SP recovery gets ramped up high with the help of DoR and can expect to use her ultimates more frequently and reliably.

A reminder to readers that here is the upgrades materials chart if you wish to obtain Domain of Revelation and upgrade it. You will need a total of 400 Einstein's Torus, 150 Nanoceramic, and 520 SC Metal-H2. Fortunately, if you have ever, at one point during your account's lifetime, owned a lv35+ Key of Reason, you will be eligible to craft the PRI-ARM with any lv50 gacha-only Heavy weapon.

Below is a comparison between Key of Reason and Domain of Revelation. I've held some tests below to showcase how much of a difference HoR performs with each weapon. 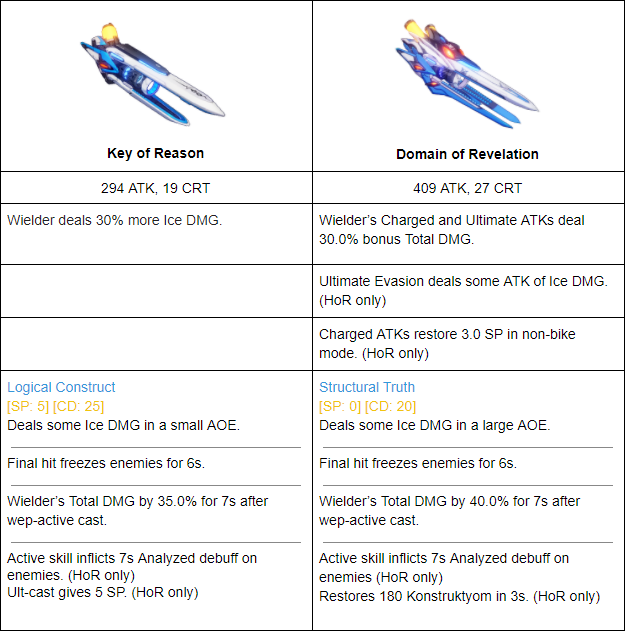 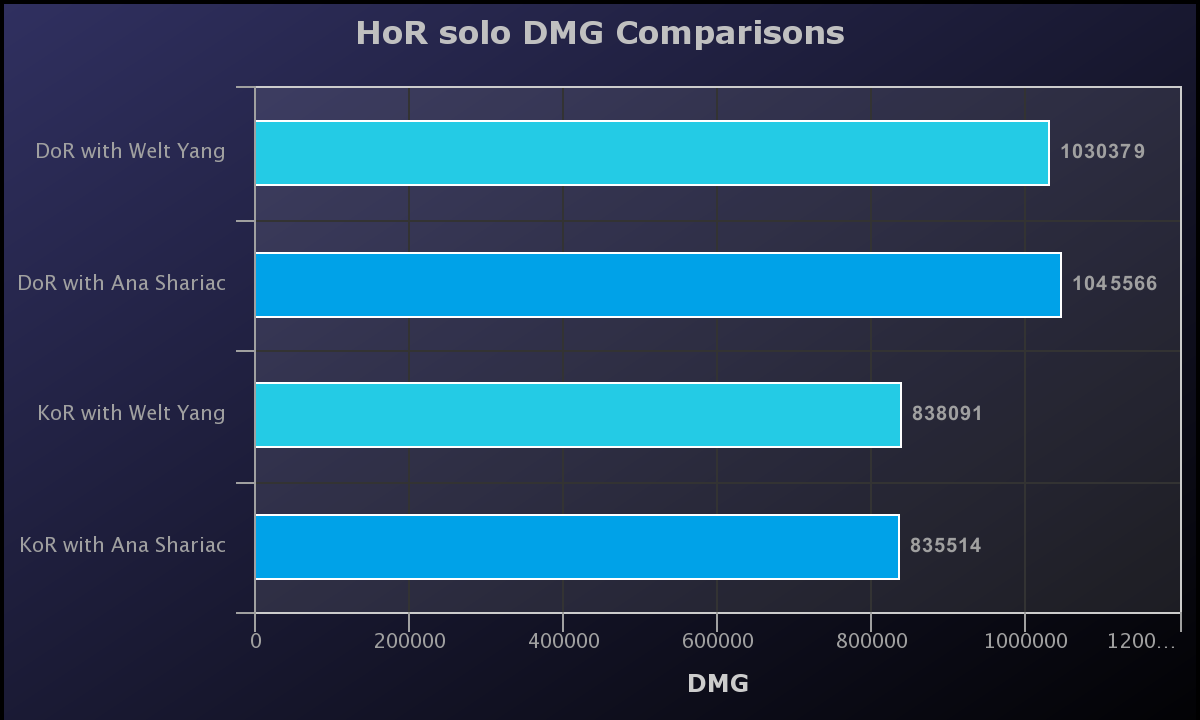 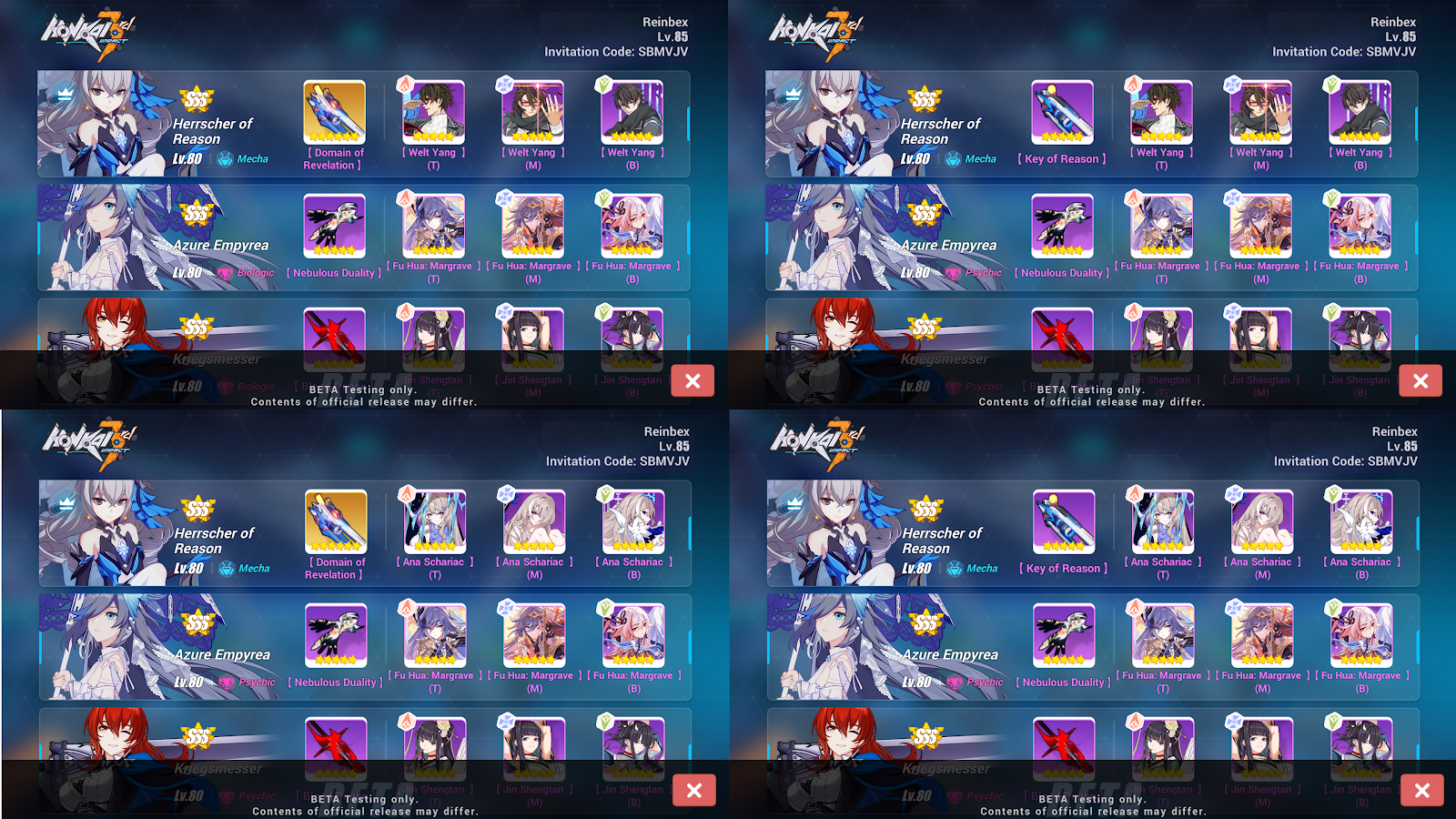 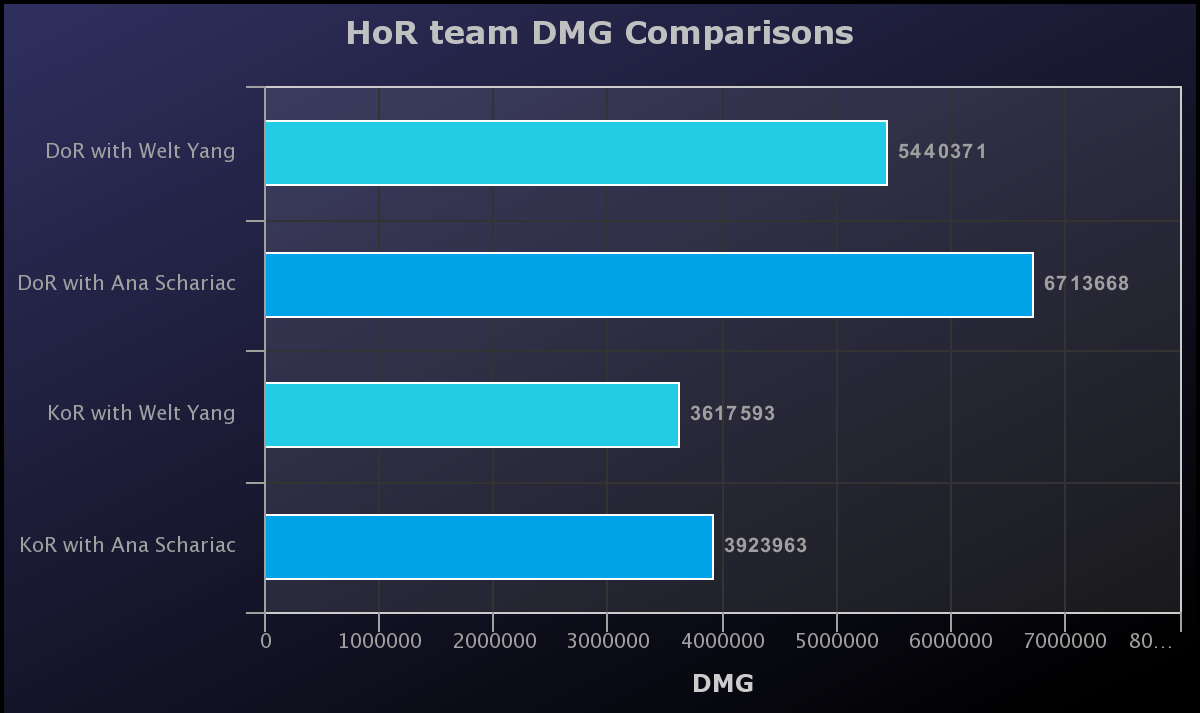 Test Results
One thing we can see here is that with KoR, HoR deals about the same amount of DMG without support and in quick successions. When with support and in a longer fight, it can be observed that HoR does slightly better with Ana.

When we observed HoR's solo tests with DoR, her performances are much better than her with KoR, and when with both DoR and Ana, she outperforms her DMG output with DoR and Welt.

However, when we look at the tests conducted with a team in two rotations per test, not only does HoR do a lot better with DoR, she dishes out a significantly more amount of DMG when equipped with Ana than with Welt Yang.

Clearly, having HoR equipped with DoR and Ana stigs are much to be desired if you want the most DMG. 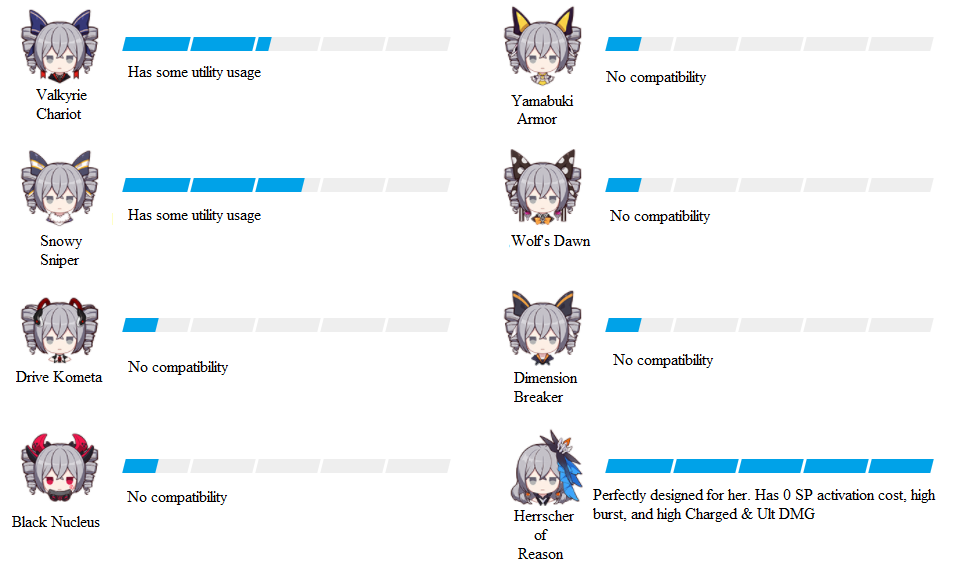 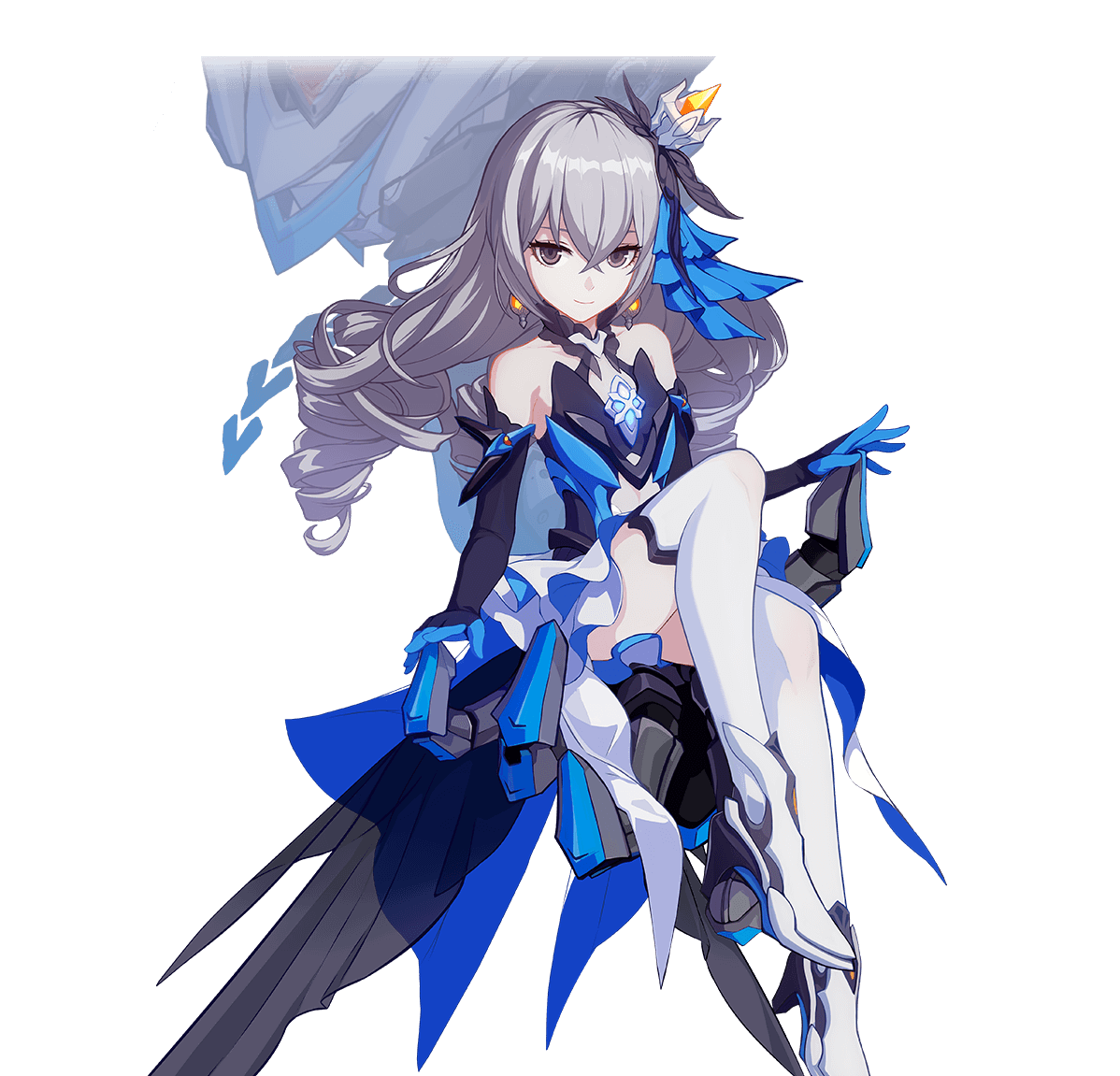 Domain of Revelation is most suitable in the hands of Herrscher of Reason. The weapon comes with many features that are locked specifically for HoR. Such as restoring her Konstruktyom meter, her SP, and helping proc Analyzed asap after an Ultimate Evasion. Additional upgrades from the Key of Reason includes a buff in DMG increase and a wider range of affecting enemies with its weapon's active. All in all, with DoR, HoR has a much more consistent playstyle of dishing out high bursts of DMG reliably. The following below are sample videos of her gameplay with DoR. 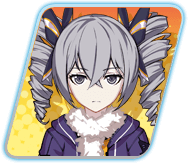 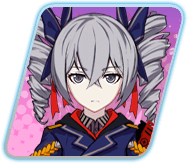 Sloth B or Beethoven B

Unlike KoR, DoR now has a weapon's active that can induce freezing at a wider range without costing any SP and at a lower CD. With this updated skill, Bronya valkyrie battlesuits make use of DoR to add its freezing support to their own support kit. Snowy Sniper can use the weapon's skill if she has not gotten enough SP yet to use her ult yet. And for Valkyrie Chariot, she can use the weapon's skill just before she ults for gathering.

Conclusion: Should you get it?

If you have Herrscher of Reason, yes! Definitely get Domain of Revelation for your Herrscher of Reason. The PRI-ARMs will drastically increase your HoR's playstyle and DMG performance. It's a complete upgrade from the Key of Reason and outright ups the DMG output that HoR can dish out. 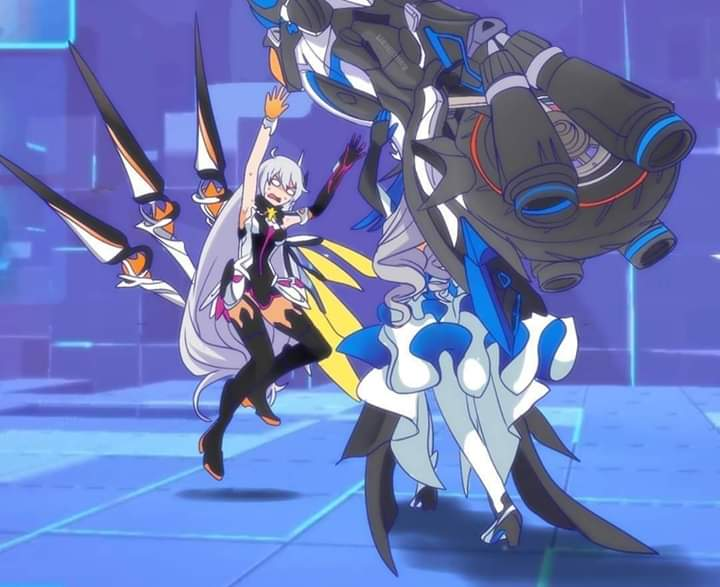