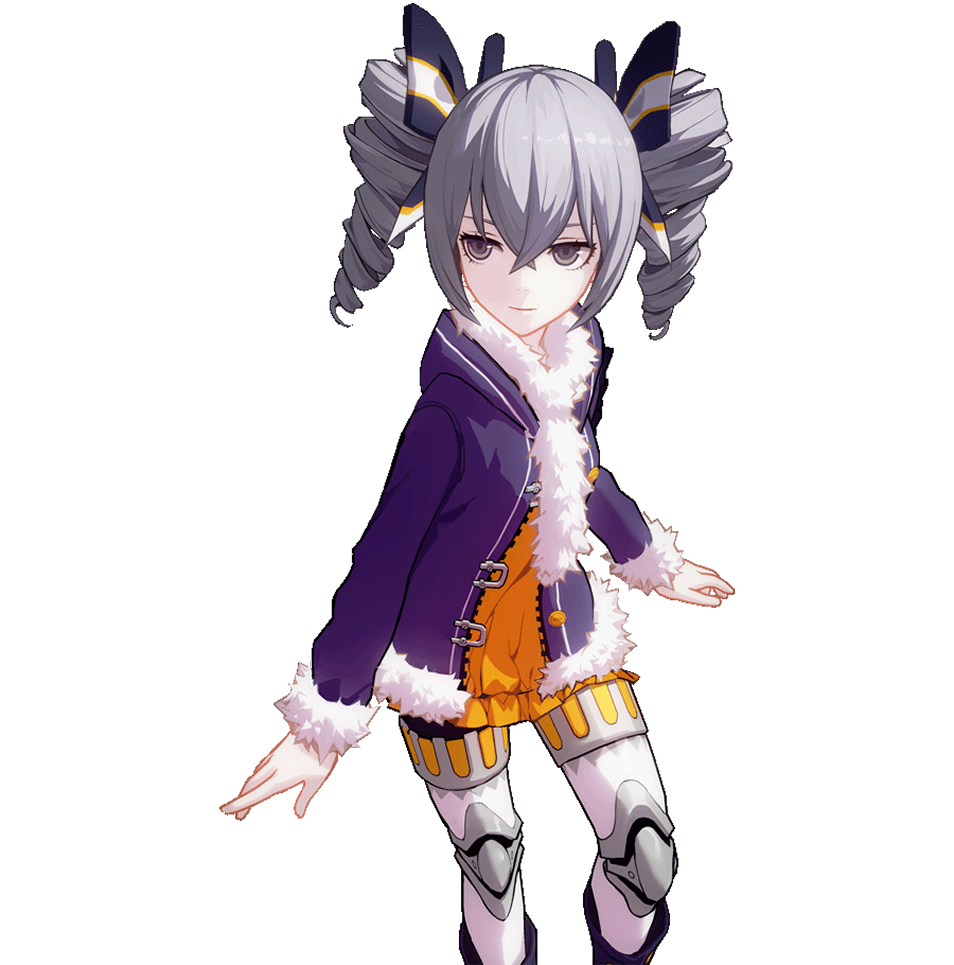 This guide is built to provide readers a better understanding of Bronya's Snowy Sniper battlesuit aka SS. Here, readers can find out more about SS's kit, how to upgrade her, and how to best play her in the game. 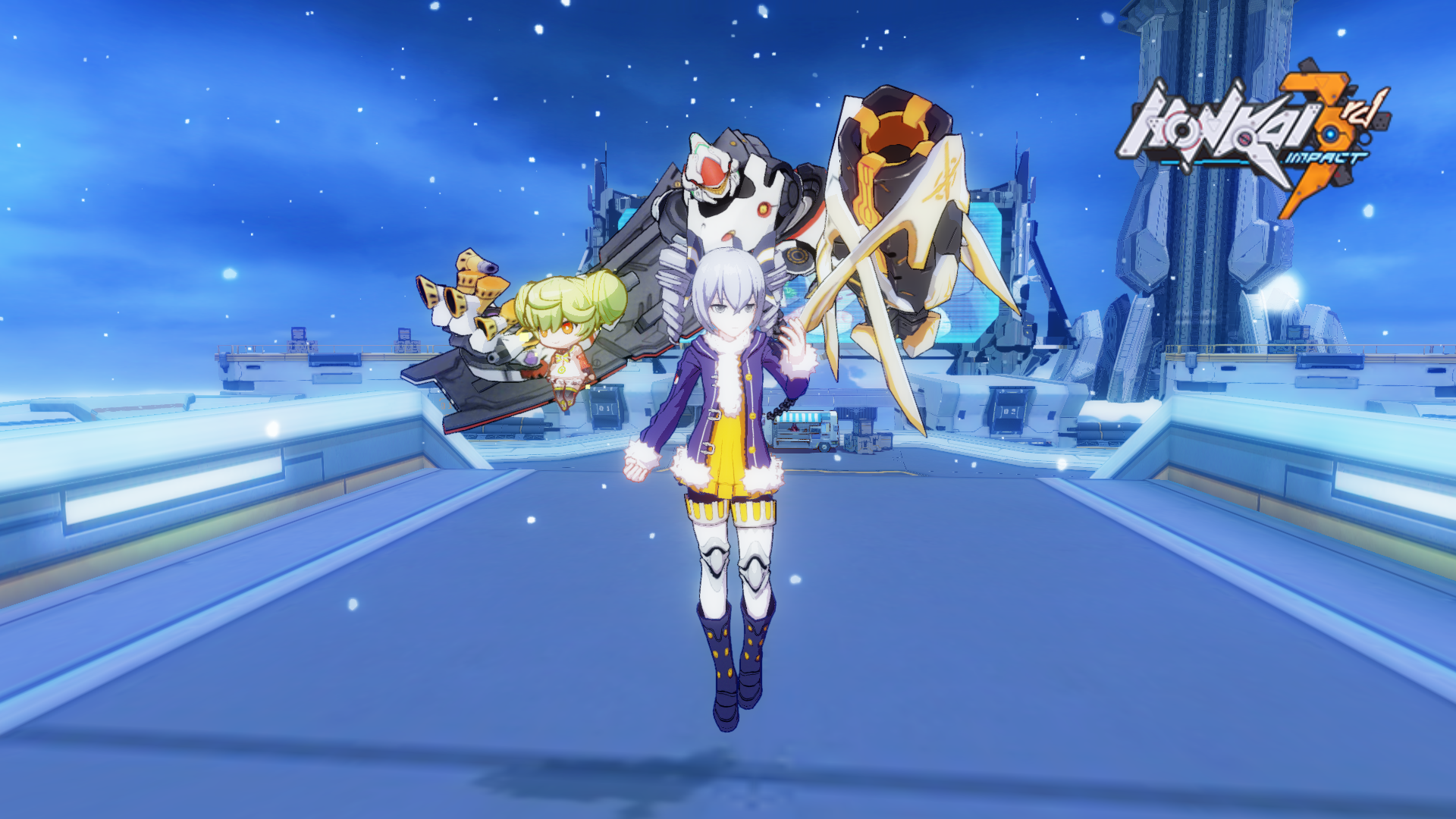 SS is a farmable A-rank BIO valkyrie who specializes in charged ranged physical damage.
Her fragments can be obtained from the following methods:

The chart below reveals how many fragments it takes to obtain and upgrade her.

This skill in the Basic Attack section is pretty much an evasion skill extra. It's very useful in providing SS a way to not be interrupted during an attack.

Because of her design, the best way to utilize SS's basic shooting is to charge up to the 3rd shot, release and immediately evade. Doing so will allow her to shoot out the most amount of artillery while negating her animation recoil. In addition, evading allows her to quickly move out of the way of any potential harm that may be heading her original location.

SS's ult is an extremely useful ultimate that only costs a reasonable amount of 75 SP. It can immobilize all freezable enemies for 8 long seconds. In addition, with the Sniper's Mark skill, those frozen enemies are debuffed to being susceptible to more physical dmg. It's highly recommended to rank SS up to ss rank to obtain the debuff skill. Her ult makes it easy to set up enemies as sitting ducks to die.

SS's passives provide her the capability to literally snipe enemies down and break their shields, making her an effective long range damage dealer. So keep SS far away from her enemies to best use her passive Particle Accelerator. 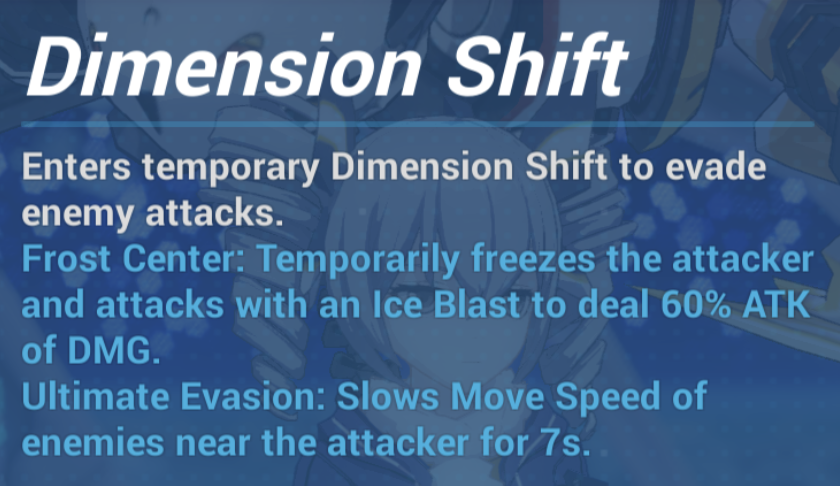 SS's evasion makes it easy to freeze and slow down enemies that approach her. Because it's easy for her to apply freeze and move slow debuffs, she can easily trigger freeze-based QTEs such as VP's.

SS's easily triggerable QTE is an extremely powerful QTE for early to mid game. In addition to packing a punch, it can also freeze many enemies within a wide range; crowd controlling many foes in one go. Her QTE isn't reliable late game to dish out any significant damage.

This leader skill is only good for niche support in Memorial Arena and events when ultimate evasions are very crucial. Therefore, it's better off to have another valkyrie that can increase damage via their leader skill instead.

Recommended Gear
Snowy Sniper's best source of damage is from her primary weapon's basic attacks. Due to her skills, it's recommended to only equip cannon-based weapons on her. Her kit involves releasing her basic attacks while keeping enemies at bay and far away from her. The following below are some of my recommended sets.

Set Explained:
This is my most recommended set for SS. Note that SS takes a small while before her attacks  come out, unlike other valkyries that constantly have to hit the enemy. Schrodinger T provides a 50-50 chance of buffing basic attacks up to either 52% or 205% every 6 seconds, making it perfect for SS. Planck M provides a significant buff to basic attacks by 51% while taking in 72% more dmg. For SS, her main damage output is from her basic attacks anyway, and to top it off, SS has the tendency to evade plenty of attacks. Planck B is just as important as Planck M. With Planck B, SS can charge and shoot faster; allowing her to dish out damage more frequently. It can also allow SS to maintain combo count. As for her movement speed drawback, SS can simply “evade” to move around rather than use the control pad. For extra bonus, Planck's 2-set effect increases SS's damage by 15% and gives her a small amount of Ignore Interruption. To top it off with this set, the 5th Sacred Relic is a powerful cannon that enjoys Schrodinger's chance of buff and Planck MB's fast shooting style to increase combo count.
Substitutes:
There are other weapons and stigmatas to substitute this set. They won't have the same effect but are still strong.

Planck T completes the Planck Set to pave the way to the Planck 3-set effect of healing and SP recovery. This gives SS sustainability and allows her to use her ultimate more frequently.

If you do not have Schrodinger T, you can try out Lier Scarlet T on SS instead. It passively increases SS's basic attacks up to 36% at all times but it pales in comparison to Schrodinger T.

Jixuanyuan M is a secondary option that passively increases the user's charged physical damage by up to 32%. Since SS is only built for charge attacks, this stig also is a considerable choice.

If you lack Planck B for attack speed, you can opt for Newton B for more damage.

The Hand of Tyr is a great weapon designed for breaking shields. Another amazing weapon choice that SS can use.

The Book of Fuxi can function as a cannon that does more damage against the status-inflicted. This works very well for SS who can slow and freeze enemies rather frequently.

Set Explained:
This set is designed to only provide physical damage support for the team. Gustav M and the 2-set effect increases the team's physical damage by 20% and debuffs enemies to intake 10% more physical damage upon using the Raider Missilie's rather low sp cost weapon skill. Newton B provides an additional debuff to a single target to intake more Total Dmg. This set is best suited for fighting against stages with elites and bosses, especially those that provide an initial SP to the team.
Substitutes:
There are a few but not too many options to subtituting the gears in this set.

Beethoven B provides the user with more SP every once in a while so SS can use her weapon skill more reliably.

Sloth B builds up SP overtime for the user while not out at the cost of depleting all their SP upon exiting and slowly depleting their SP while the user is out. In addition, Sloth B also move slows and weakens the user upon hitting 0 SP. So Sloth B is only good for providing the user with SP for weapon skill.

Although this weapon is a laser, it has a fairly cheap weapon skill. Not to mention, Support SS won't be dishing out the damage so equipping her with a laser is fine.

Set Explained:
This set is designed to be similar to the better damage dealing set. Event-only stigmatas Bronya Magic T and M (and its 2-set) increase SS's damage. Farmable Einstein B provides additional damage buff to charged attacks. Markov Type A is a good early game cannon-type weapon that SS can utilize.

Substitutes:
Because they are 4-star only gear, there are only so many 4-star gear that can still work with Snowy Sniper. Here are some of the following:

Tesla M increases the user's damage by up to 51% against frozen enemies, Snowy Sniper's QTE, ult evasion, and especially her long lasting ultimate can freeze enemies.

Elizabeth Bathory M is another stigmata that increases the user's physical damage (by 20%) while at 80% or higher HP.

Recommended Teams
There are various ways to build a team around SS. Some things to consider having in the team is method to lift enemies airborne for SS's QTE, a method to gather, and a method to impair for more damage.

This team involves having VR gather enemies with her ult evasion and then impairing them with her weapon skill. Follow up immediately with DB to lift and time slow the gathered (immobilizing and extending the impair duration). If you have, you can also use the Hand of Tyr's weapon skill to shield break enemies. From there, you QTE into SS and proceed to attack with splash damage onto the gathered foes.

Snowy Sniper doesn't have to always be the main damage dealer or do any damage at all! SS, too, can support her team.

This team gives SS the role of support. In a physical team such as this one, an ss+ rank Snowy Sniper is highly recommended because of her skill Sniper's Mark(SS). This strategy involves CH gathering enemies and impairing them. Then switch to SS to freeze/immobilize them with her ult. Doing so debuffs the enemies into taking more physical damage for the duration of the ult. Once applied, change to your main DPS GK (or NS) to unleash some serious hurt.

This niche team specializes in abusing SS's AOE freeze. VR gathers enemies and triggers SS's QTE with Artemis' Guardian. SS QTE's into the battlefield, freezing the gathered enemies. From here, SS can do a bit of shield breaking but most importantly, she uses her ultimate to freeze enemies in place for a long 8 seconds. This is enough time for 6S, the main DPS, to attack with bonuses against frozen enemies.

Between all the game modes, the best game mode suited for Snowy Sniper is Abyss. In both Dirac Sea and Q-Singularis, the stages provide enough SP for SS to be able to use her weapon skills or ultimate immediately. SS fares very well against crowds of enemies. After gathering enemies together with another valkyrie, SS's splash attacks become much more effective. She only needs to charge 1 session to unleash 3 shots to damage all enemies (that are gathered).  In addition, by attacking many enemies at once, she gains SP faster. With enough SP, her 75 sp cost ult becomes ready again after a use. In a sense, she can spam her attack style to victory.

Conclusion - Thoughts on Snowy Sniper
Snow Sniper is an amazing damage dealer and a niche support. Her value continues to increase as she ranks up. She's great from early game all the way to late game. However, she can only do so much. Snowy Sniper eventually caps out as a damage dealer at Red Lotus tier Abyss. SS is still great. She provides easy crowd control and debuffs. Her splash charge attacks are heavy hitters, and she can essentially spam ultimates and basic attacks against gathered enemies. If you wish to utilize Snowy Sniper, I recommend ranking her up to at least SS rank. Hopefully this guide has taught you how to utilize Snowy Sniper as much as possible.