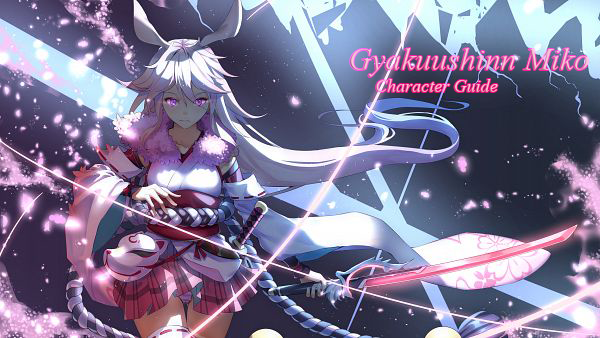 This comprehensive guide will be a quick overview of the A-rank Battlesuit, Gyakuushinn Miko, and dive into specific aspects of gameplay where she excels the most.
Miko is Yae Sakura's Biological Physical Battlesuit, who excels in Sustained Burst Damage.
Base-A, awakened characters are evaluated at SS-rank. Since her SSS-Rank (nor SS-Rank) skills does not implicate her playstyle in any way, this guide is applicable to using Miko at any rank above A.

Tip: Miko does not get significant or particularly strong skills at either SS or SSS rank, and the most important upgrades there are the raw ATK buff. As a result, Miko is considered to be one of the strongest base-A characters at just S-Rank, no strings attached.

Effect: 3rd and 5th attack in the Basic Attacks sequence, Sakura Blossom Bladewaves (from the passive), QTE Bladewaves (a total of 3) and “slashes” during ultimate will add 1 Sakura Count to all enemies hit. Enemies who accumulate 3 Sakura Counts (Counts last indefinitely) will receive a Sakura Brand (lasts up to 20 seconds).
In addition, casting Ultimate or using Sakura Blossom's Active Skill will immediately apply a Sakura Brand to enemies hit.
Special Note: Gyakuushinn Miko and Sakuno Rondo (Theresa's A-Rank battlesuit) share this same resource system. As a result, Miko can use Combo Attack against targets branded by Sakuno Rondo, and vice versa. Their Sakura Count counts are also shared (ie Sakuno Rondo can apply two with her basic sequence, and the first Count that Miko applies will turn them all into a Sakura Brand). In addition, no new Counts can be applied against Branded targets, and their Counts will be reset to zero when a brand is consumed, regardless of the method.

Effect: Slash through all enemies in front, then consume all Sakura Brands to inflict heavy damage. (Note that the consecutive slash ability shown in this and subsequent gifs are only unlocked at S)
Uses: Primary Damage-dealing method. Has a very high damage scalar that can deal insane damage, especially during Ultimate.

Effect: Deals massive damage to all enemies in a line in front of her, and each bladewave applies 1 Sakura Mark on every enemy it passes through.
Uses: Can essentially apply a Sakura Brand against everyone in front, except if enemies are lifted very high, in which case there is one horizontal slash that goes fairly low and will likely miss. Will consistently apply a Sakura Brand when using Sakura Blossom (due to the extra bladewave) regardless of height.

Effect: Damage all enemies near her vicinity, applying a Sakura Brand to all enemies hit.
Uses: Quick way to apply a brand. In addition, pressing Attack right after a dodge will immediately go into Combo.

Effects: Deal high Physical damage around her, apply a Sakura Brand to all enemies hit, and enter Burst Mode. During Burst Mode, all her attacks will be One Flashes that applies a Sakura Mark. Pausing during Ultimate will allow Miko to perform a One Slash against all targets that has a Sakura Brand.
Uses: Miko can dish out massive damage during her ult period, allowing the user to use One Slash against one target 3 (or 4 with Sakura Blossom) times.

Building Miko:
Gyakuushinn Miko relies exclusively on her Combo to do damage (even in her ultimate, the One Slash procs count as Combo). This means that you should only pick stigmatas that can buff Melee Combo All or Physical Damage.

One Slash further increases the scalar value on Miko's combo attack, up to an astounding 1000% of ATK.

Miko lacks innate modifiers, featuring only a Physical Damage increase for keeping 20/50 Combo, and a high increase to Crit Rate against Elites without a shield. Given her high scalar value, however, any damage multiplier is extremely valuable on her stigmata. In addition, stigmatas that offer SP gain are highly valuable as it allows her to get to her Ultimate much faster.
Also, feel free to mix-and-match the example builds given below to tune her to your favorite playstyle. Want more One Slashes? Bring Sakura Blossom. Want more consistency? Bring Void Blade and replace Schrodinger T (with Lier Scarlet T, for instance). Given Miko's extreme versatility, a wide range of potential builds are available, so the ones listed below (barring the two Starter Sets (Builds 3 and 4)) are by no means exhaustive.

This set provides high versatility, great sustained damage, and is overall one of the most highly-rated stigmata sets on Miko. The only downside is that you have to time Miko's attacks to let Schrodinger proc on her One Slash. Alternatively, using Planck M and Pride B will give Miko the highest damage imaginable, adding up to a whooping 99k for a One Slash crit during ultimate (Assuming 1000 ATK, and before any allied buff or enemy defense are calculated).

This set gives her playstyle a lot more fluidity and removes the need to precisely time Schrodinger procs. The improved Crit Rate from Sirin also helps reduce extreme damage differences between Ultimate casts, compared to Schrodinger builds that rely on base Crit chance and high-rolling Schrodinger.

This is a decently strong set that does not require any Gacha pieces (Lier Scarlet is from Time Swirl/Bounty Mark, and can be replaced with Jingwei (which only works against Boss) when applicable). Jizo Mitama's Passive can be used to good effect here, since Miko's Combo Attack float enemies. However, make sure you do not use its active as it presents an unnecessary SP Drain that is better used to fuel Miko's Ultimate.

This is a suitable beginner set for those who recently acquired her and do not have much better gear. Overall not a very satisfying set but it has decent enough damage for a beginner setup. Note that since Naoe does not work against Bosses, Jingwei T or Ryunosuke Akutagawa T would work better there.

Building Around Miko:
Gyakuushinn Miko is a DPS that demands high uptime, but at the same time she offers decent throughput. As a result, comps that allow Miko to stay on-field will reap the most reward from Miko's consistent playstyle.
Alternatively, builds that can reliably proc Miko's QTE can make Miko a strong off-DPS that comes in whenever the primary DPS needs a little time off (against type disadvantage, for instance).

This comp remains one of the most widely-used “Starter Comp,” recommended to many players by the game's tutorial system, and for good reason: It has a very maneuverable playstyle equipped to handle numerous occasions. Ranger can gather enemies together, lift them with Artemis, and allow Miko's QTE to slash through numerous tightly grouped enemies. In addition, the tankiness provided by Yamabuki's Shield and the additional Critical Rate provided from her Leader Skill (further increased by Core Modding) gives Miko the much-needed consistency to reliably score Criticals on her Combo. Against bosses, simply replacing Ranger with Divine Prayer to gain access to the powerful off-field Impair (unlocked at S). Due to the long start-up time of Miko's ultimate, effects like Celestial Hymn's QTE and Newton B/Beach Mei's debuffs have difficulty benefitting Miko's ultimate, but DP's passive is far more consistent.

This comp provides extraordinary burst potential through Ult Stacking. Both CH's and SS's ult last a good amount into Miko's Burst, giving her the much needed damage modifiers to make her One Slash a glory to behold. However, the relative slow speed and long SP-gathering phase make this comp much less appealing in situations that demand quick resolution and do not provide bonus SP.

In Memorial Arena, Miko remains a friendly, budget option that can easily secure 22-28k on many bosses with minimal support, gear and rank, even in Masters Bracket. While she no longer makes any headlines, she remains a stalwart supporter of new players entering the merciless arena. The aforementioned YA-DP-Miko setup is extremely effective, with DP's backline impair support easily allowing Miko to shave an entire bar (or more) off bosses that are not physically immune.
Here are a few examples from Bilibili, showcasing Miko against Memorial Bosses with minimal or replaceable gacha gear:
Herrscher of Void (23413, only 3* Gear): av41701061
Dark Xuanyuan (27893, Schrodinger build): av27047960
Jizo Mitama (28604, Ekaterina set): av18176773

Thanks to Miko's high sustained throughput, she could be very handy in any beginner-level Abyss (Agony and below), especially when Physical damage is preferred. Both aforementioned comps -- YA-Ranger-Miko and CH-SS-Miko -- are powerful picks in both Dirac and Q-Singularity. However, stronger late-game assets such as Augmented Bladestrike or Herrscher of the Void are much stronger alternatives. As such, she is not viable in the most competitive level due to her relatively low ceiling, even when fully built and properly supported.

In Apotheosis, Miko is extremely powerful whenever she could take advantage of the stage buff: Since the stage buffs are usually high multipliers, Miko benefits immensely from them due to her extremely high scalar values.

Gyakuushinn Miko is one of the earliest yet well-designed Valkyries. Even today, she remains a powerful Biological Physical damage-dealer. Against her competitors, such as Night Squire and Augmented Bladestrike, Miko requires far less resources (just S-Rank, with gears that can be used by other Valkyries later on) to excel. And even though her ceiling is fairly low, she has a strong curve that lasts well into the start of late-game. I would strongly recommend her to any new player just starting out. She has an extremely well-balanced kit that is strong in almost all circumstances, while demanding little attention or investments to be thrown her way.
Overall, I would recommend getting her to S-Rank as one of the first things to do, and allow her to carry the weight of your team's core DPS until enough resources are invested in late-game characters, such as Chariot, Night Squire, or Flame Sakitama. However, due to her relatively weak improvement from Ranking-Up afterwards, focusing on other characters' Fragments (such as Flame Sakitama) past this point is more preferred.