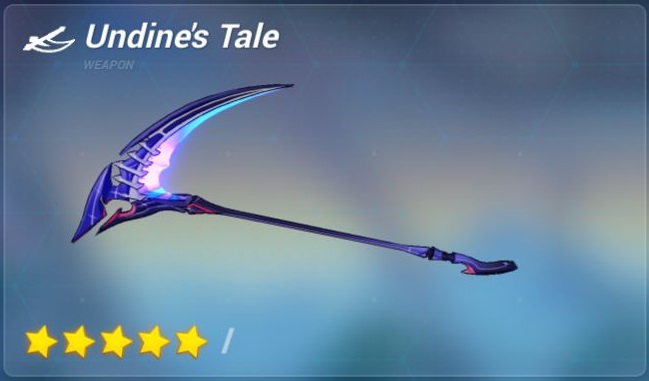 A scythe that appeared when Seele activated the powers of her stigma. This razor sharp weapon of terror is a stark contrast to the quiet and shy little girl. Perhaps the weapon is a secret side of her true nature or an embodiment of her wish to protect someone special.

Songs of the Deep

Songs of the Deep

The passive offers bonus attack speed, which makes it easier for Swallowtail Phantasm to stack up SP and Veil quickly. Attacking enemies from behind grants nice bonus total DMG, making it a perfect fit for Scythe-wielders with a flexible combat style. The passive of Undine's Tale makes it a strong generic choice which can benefit anyone who wields it.

Swallowtail Phantasm is Seele's 1st battlesuit and fights with high flexibility. Undine's Tale's active boosts her physical DMG and making her more comfy while dealing DMG. In burst mode, the active restores massive Veil to prolong her burst mode and the assault effect also help her stick to the enemies. The attack speed boost from its passive means faster SP & Veil regen, while Swallowtail Phantasm's flexible combat style also positions her well to make the best of the passive's bonus total DMG.

Undine's Tale's passive works well for Argent Knight: Artemis too. The bonus attack speed enables her to stack SP and Hypothermia faster, while her agility and Ice Cell effects make it easy to proc the bonus total DMG of the weapon's passive. The assault effect and decent DMG of the weapon's active mean Argent Knight: Artemis can close in on distant enemies with ease.