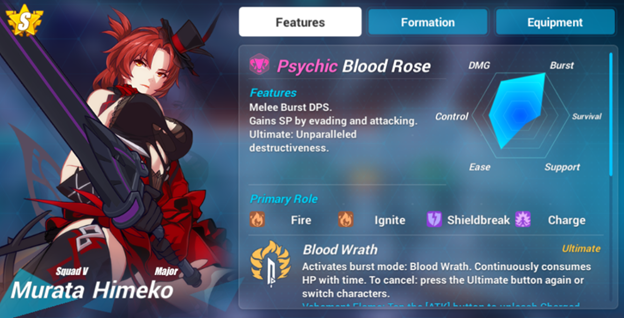 Let's first dive into her important combos and skills. 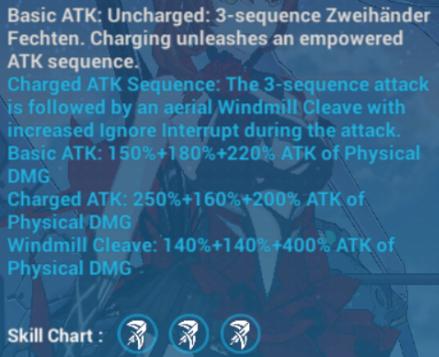 BR charged attack combo is also 3 slashes but it is followed up with a 3-slash windmill cleave combo so 6 attacks. To charge an attack, keep holding the attack button. Only the 1st attack has to be charged, the rest can be quick taps.  If you ultimate evade and keep tapping attack, you will also perform the charged combo + windmill cleave.

During ultimate burst mode, BR will ignite enemies for 6s and do additionally fire damage.  Additionally, windmill cleave can go up to 8 cleaves.  This is your main damage dealer and makes BR a strong fire DPS.

However, you will lose increasingly more HP during Ult which can kill BR.  You need to keep an eye on your HP because you can easily die from using Ultimate too long (2-3 combos).  Switch out or cancel ultimate to stop the bleed.  You will also take 40% less damage during ultimate including bleed damage.  Supposely, you also do not take additional bleed damage (like in dirac sea) if you do not get hit during ultimate.  Lastly, you will not gain SP for attacking during ultimate.  You can still get SP through SP orbs or affixes. 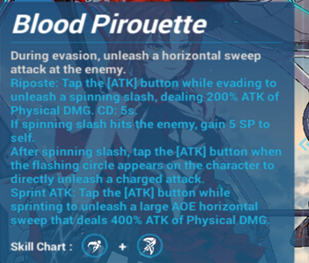 Riposte is a special move unique to BR.  You need to press dodge (not evade an attack) followed very quickly by attack.  This will give 5 SP upon hit as well as allow you to go into charge attack combo and windmill cleave.  This is very effective for starting your combo.  There is a 5s cooldown so you cannot do this everytime.  When you see a red flash, then you can do another riposte. Riposte has a 75% to ignite enemies for 4s.

Sprint Attack is where you run as BR and then attack.  It has a long animation follow up so you should cancel with a dodge.  A good follow up to sprint attack is riposte.

BR's evasion gives her a fire ring and an explosion that does fire damage.  More importantly, her first combo after evasion is a charged attack so this can save some time.

BR's basic and charged attack will do fire damage.

Her most important passive is Warding Blood.  Below 66% HP, BR gain 30% more damage and more tankiness as well. (If BR started with 50% HP in MA, she would be a top tier boss killer)

Another very important passive is Burning Blood. Basically you want enemies to be ignited for maximum damage.  Without ignite, your DPS will be significantly lower.

BR's switch is a downward cleave. Nothing fancy but it's simple.
BR's QTE requires stun which is very difficult and useless against mechas.  However, it does trigger time fracture and does 3 windmill cleaves.

SS BR is a huge upgrade because of the ignite skills you unlock.  S BR only has ultimate to ignite enemies and riposte also has a good chance. SS BR will ignite enemies when taking damage during charged attack or ultimate as well as performing ultimate evasion. Lastly, SS BR ultimate will do additionally damage if you are under 50% HP. SS BR also gains healing after ultimate ends which is a toggle skill that is situational. SSS BR only gets stats and takes less elemental damage.  It isn't a big game changer like SS BR.

You can farm BR by using ancient will in the War Treasury shop.  You can get 6 frags a week for 14 ancient will per frag.  Currently, there is an advanced supply for BR so if you have S BR and roll 100 times; you are guaranteed SS BR (though it may take less).  If you do not have BR, you will have at least 70/100 frags for SS BR if you roll 100 times. 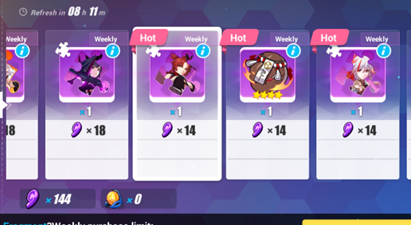 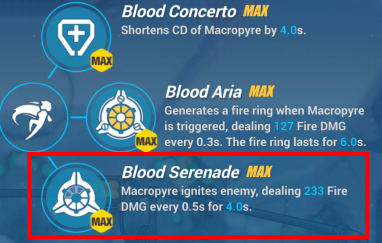 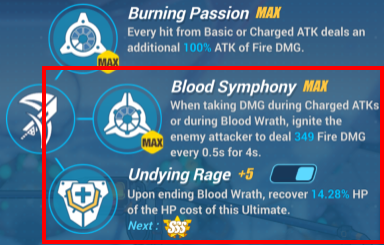 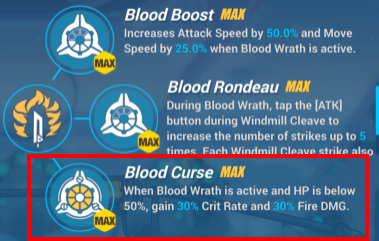 Let's start with the optimal set-up.

Optimal DPS: Godslayer Surtr and Thales Top/Mid +Fuxi Bot does the most damage.  This build increases all-damage, burst damage, charge damage, and some fire damage.  Fuxi Bot increases elemental damage of ignited targets so this is everything BR wants.

Blood Dance is a good support weapon but it's not a great elemental DPS weapon.  It is best to have another Himeko use Blood dance with support gear and have BR to DPS as seen in videos below.

If you do use Blood dance on BR, your BR is more support and less DPS.  Hopefully you have another DPS on the team if that is the case.

Gacha Stigmata Substitutes: Higokumaru top and Shakespeare mid work but aren't close to optimal.  Even Jingwei top is better if there is 1 enemy. Bikini Mei Mid is okay but the problem is the short duration of the buff.  You really need Thales Top/Mid for optimal DPS. For bottom, Newton bot is okay but otherwise I would go with Einstein bot.  Keep in mind, you need burst charged attack damage so Lier red top and Otto top will not work.

F2P Stigmata Build: Surprisingly some good options.  Jingwei Top is great for bosses without any other enemies.  Jingwei Mid is also a good option.  Lastly, Einstein Bot is good too.  If there is more than one enemy, then instead of Jingwei top, you can use Naoe top if you will not break shield.  Cleaver of Shamash is not a bad weapon for F2P and its weapon skill can help lower BR's HP.  Just be careful when you use it in combination with BR ult that you do not kill BR.

High Scores on Heimdall and Parvati

You will need SS BR on Parvati for 1 rotation and S BR is okay for Heimdall (2 rotation).
Here are the teams. 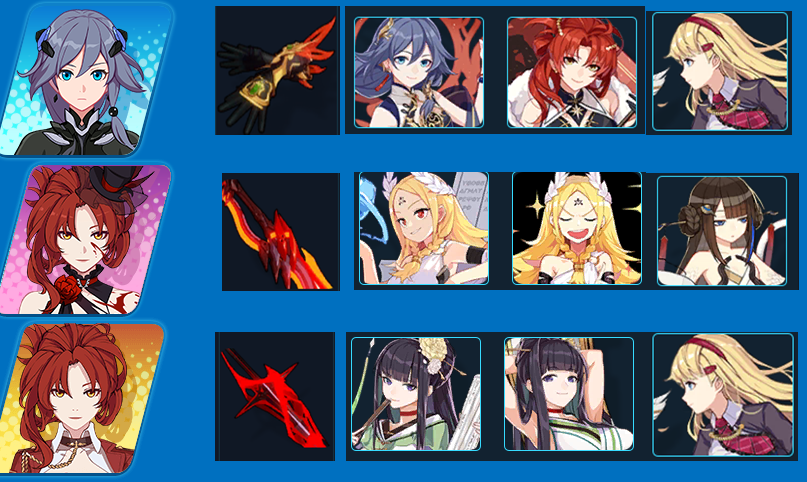 BR Ultimate and Charged attack will break shield.  Lastly, Blood Dance Active also breaks shield.  The goal is to do 2 rotations; 1st is to break 4 shields and the 2nd is to use Blood dance and BR ult to kill Heimdall. 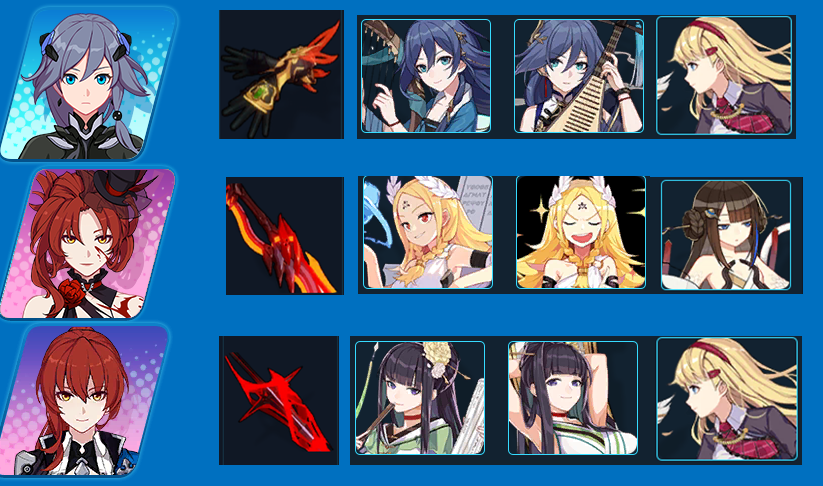 This one is straightforward.  Use both weapon skills and then BR ultimate to kill.  By getting hit or evading attacks, you will do more damage so don't break shield too early with ELF.

Good against Mechs, RPC, and HoV 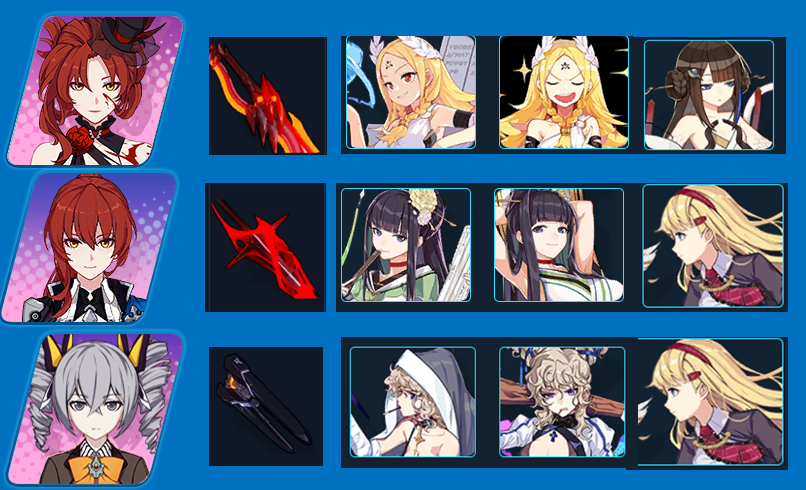 Team can be optimized with Vikrant on Wolf Dawn instead of Delta laser.  Fuhua musician top/mid works well on WD.  The goal of this team is do 4 rotations on RPC.  Keep BR's HP low when you do the 2nd and 4th rotation where you break RPC's shield.

User Phoenix to attack and charge up her bar to max.  Then use Ice Himeko to apply Blood Dance and Newton Bot.  Use BR ultimate to ignite and attack.  Phoenix Ultimate can be used to dodge HoV's large area attack.  Rinse and Repeat.  SS BR and Jin Shengtan set can get almost 900 score.

That's all folks. Thanks for reading!