6★ ATK: 393; CRIT: 43
With one mighty swing, the sword flames will consume the world and scorch Asgard. It marks the Ragnarök, the downfall of gods, but amidst the ashes of the old world, seeds of hope start to sprout.

Eldr of Ragnarok
Pay half of your current HP to gain a strong shield and ignite enemies in a large AOE for 12s. While the pay for HP is hefty, the wielder gains a massive shield and an even more important large ignition AOE. This skill is best suited for Blood Rose and Vermillion Knight.

For Blood Rose, she no longer needs to worry about losing HP while this weapon's active skill is in effect. During the effect of this weapon's active, which lasts long enough for two full sets of Blood Rose's full Burst swings, she will not be drained of HP from her ultimate. This is extremely important for Blood Rose when she has less than 50% HP, when she is very vulnerable to losing all of her HP. In addition, the absurdly thick shield almost guarantees that Blood Rose won't be losing any HP while she's attacking.

For Vermillion Knight, she gains a great 30% Fire DMG bonus and slightly increased SP recovery during this weapon's active. Vermillion Knight could always use some more Fire DMG and SP to continue her charged ATKs and Ultimate playstyle.

And last of all the benefits, the ridiculously large ignition AOE ensures that any ignite-related DMG boosting effects that Blood Rose and Vermillion Knight have and/or have equipped will always be in effect (given that the enemies can ignite in the first place).

Rivener of an Era
Buffs wielder with temporary Fire DMG bonus when Ult or Burst Mode attacks hit (12%/24%/36%/48%). The only Fire DMG greatsword wielders are Blood Rose and Vermillion Knight. For Blood Rose, this is great since her ult casting is one hit, and she can easily max out the rest of the stacks while in Burst Mode. In Vermillion Knight's case, her ultimate hits too fast and can only gain 2 stacks per ult-cast, thus preventing her from making full use of this skill without ult-ing twice in a row. This can time badly with temporary support from the rest of the team.

Differences between Godslayer and Muspellsverd: 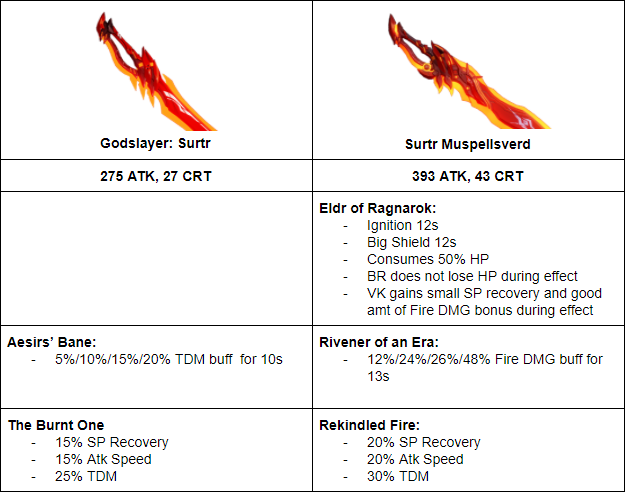 A reminder to readers that here is the upgrades materials chart if you wish to obtain Surtr Muspellsverd and upgrade it.

Let's take a look at the comparisons in DMG where the final total DMGs are recorded. These are the following constant variables for the testing:

Do note the different Titles and Y-axises (DMG Output) per chart. 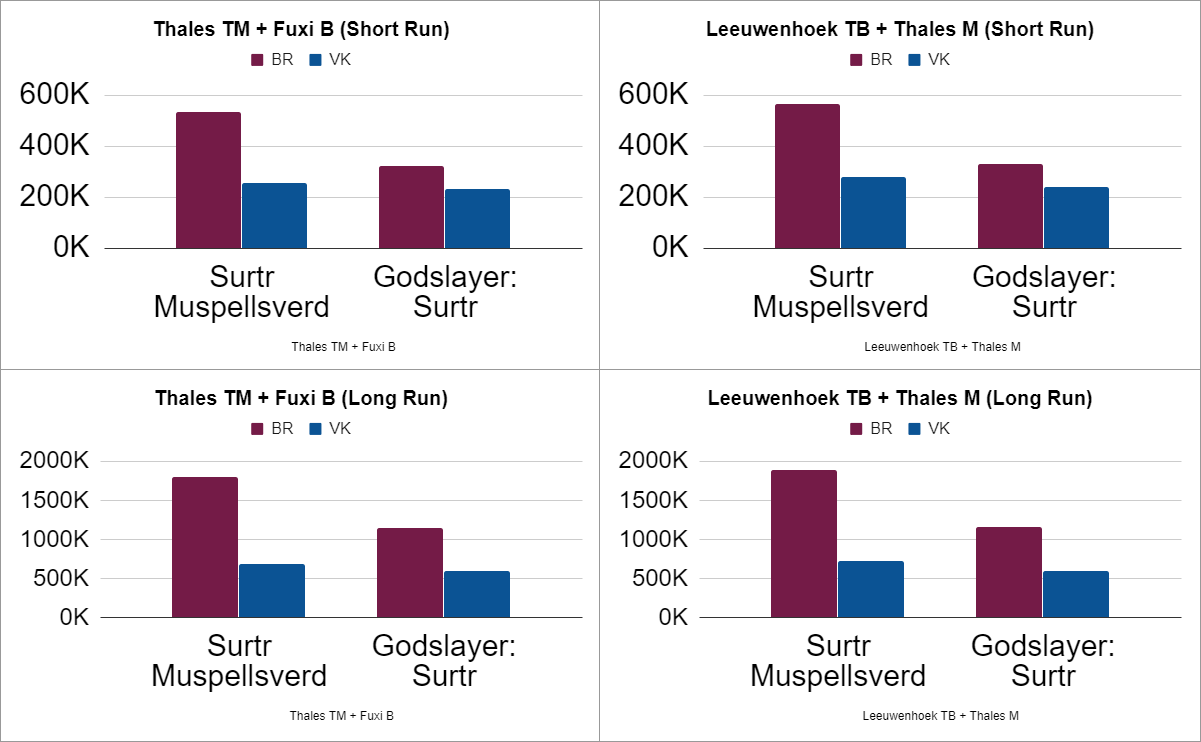 Surtr Muspellsverd, designed for both Blood Rose and Vermillion Knight, is obviously most recommended for these two valkyries. In all cases, Leeuwenhoek TB + Thales M does not bring too big of a change but always results in the slightly better DMG output. This improvement can be ignored for the most part since not everyone can freely pull what they desire.

The important aspect is total improvement in DMG output. In BR's case, the change of weapons from Godslayer to Muspellsverd results in an extremely significant improvement. Her DMG output improves by around 40-50% in every case.

Now does this mean Blood Rose is better than Vermillion Knight?
Not necessarily. While VK deals less DMG than BR, she can deal more DMG than BR if given the same amount of (short) time. Meaning VK can utilize short lasting supports better than BR. And when compared to PSY-valkyries, there are currently much better and stronger PSY (Lightning) Valkyries than BR. So in game modes that do not care about time fracture, such as the Abyss, Blood Rose would stand a chance to shine.

That being said, here is a gameplay demonstration of Blood Rose's performance with the new Surtr Muspellsverd:

The new PRI-ARMs Surtr Muspellsverd gives Vermillion Knight and especially Blood Rose a massive power boost. For those who enjoy playing Blood Rose and/or those who have enough materials, I recommend getting Surtr Muspellsverd. Blood Rose's playstyle, alongside with the PRI-ARMs, works well in abyss the best due to Blood Rose's somewhat slow fighting style. Otherwise, save your materials for other PRI-ARMs such as Shuhadaku of Uriel, the sister weapon that Vermillion Knight would utilize greatly.

You've reached the end of this Weapons guide! I hope you enjoyed reading this guide! If you wish to visit me, my discord ID is Reinbex #1347. My Armada's ID (NA) is 1019 and Discord link is https://discord.gg/bVBRkF4. If you have any questions or just want to visit, don't hesitate to say hi!