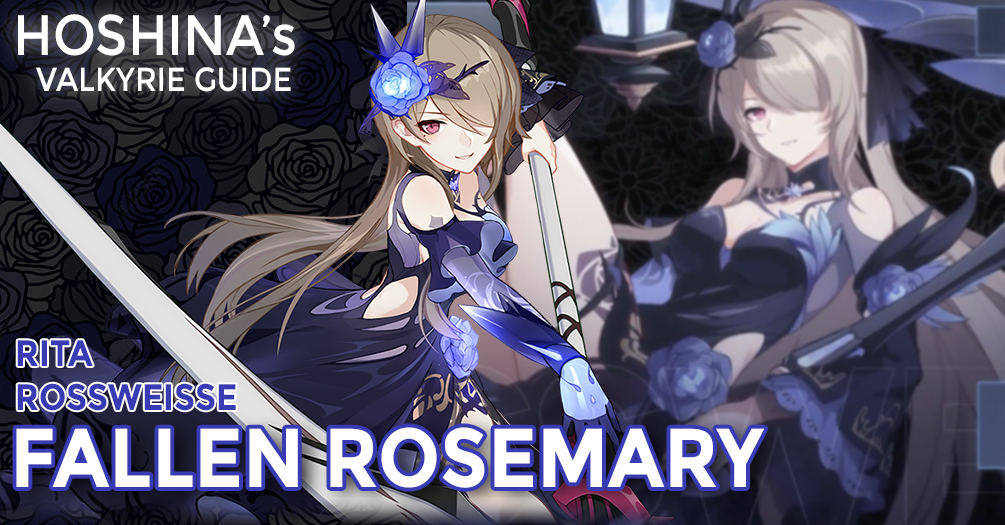 Her Core Strengths is:

(Valkyries are based on S-rank Lvl.80)

FR can charge her strength on standby when her teammates are fighting.

Well of Urd  (Unlock at S-rank)

Combo and Charged ATKs from teammates restore 65 Disir and 12 SP for Fallen Rosemary. CD: 5s. Maximum amount of Disir is 200.

Entering Valfreyja Form restores 10 Disir per 0.2s for 2s. Can only be triggered once every battle.

Vapor of Souls  (Unlock at S-rank)

Attack with the scythe and siphon enemy souls to enhance self.

On hit, Linnorm creates Ormr Rune: Enemies near Fallen Rosemary are struck by lightning and take 50% ATK of Lightning DMG per second for 15s.

Bite of the Serpent  (Unlocked at S-rank)

Feast on the Damned  (Unlocked at S-rank)

When Stain of Trickery forms, every Rune present enhances its strengths and make enemies in range take 5% bonus Lightning DMG.

Lift the Trickster’s seal for a mighty blow.

Free from Franangr  (Unlock at S-rank)

Quickly evade enemy attacks. Can be performed twice in a row.

Upon Ultimate Evasion or when Strix is fully recharged in Valfreyja Form, Evasion ATKs can be connected into Basic ATK 4th sequence on hit.

Water of Hel  (Unlock at S-rank)

S⭐ - 85%
Has unlocked the core skills and most of the support abilities.

FR signature equipment are as shown above. It is the new weapon and stigmata that were specifically modified for Rita’s new battlesuit. While Iris of the Dreams is fully for FR, Irene Adler set can also be used by other Lightning Support Valkyrie (Phantom Iron) and only have a bonus effect if all 3 pieces were equipped by Rita.

Iris of the Dreams’s active skill will allow FR to enters Valfreyja Form immediately and deals 200% ATK if Lightning DMG. Other notable effect for this weapon is:

Meanwhile Irene Adler set is the new powerful lightning support that boost team Lightning DMG. Below are the most notable buff that highly effective in battle:

As stated above, all of the Irene stigma provide decent boost in both wielder and team’s Lightning DMG and Elemental DMG. These stigmatas are highly recommended to be paired with Iris of the Dreams as the weapon skill will also Bedazzled enemies thus can take advantage of 2-pc effect.

In term of Support, FR work well with these Valkyrie and Weapon:

AE, Phoenix and PI are an Omni-Element Support (all elemental damage) while LE is a Lightning Support only. Where once certain condition or moves are fulfilled, they will either buff the whole team or debuff the enemies.

In term of Damage Dealer, FR can marvelously support Lightning DMG Dealer such as Herrscher of Thunder, Shadow Knight, Hawk of the Fog, Lightning Empress, Darkbolt Jonin. The only thing to watch out is how to maximize FR’s Lightning DMG and her support buff by perfecting the timing and QTE.

The best team to equip FR is:

As all know by now, FR is a Lightning Support Valkyrie with mid-DPS that help a lot alongside HoT and AE. This is a perfect team for Captain who do not have Blood Dance or Thunder Kikaku as support. To maximize the full potential of Lightning DMG and support buff for FR, there is a strategy to it that was mentioned in the tutorial stage. 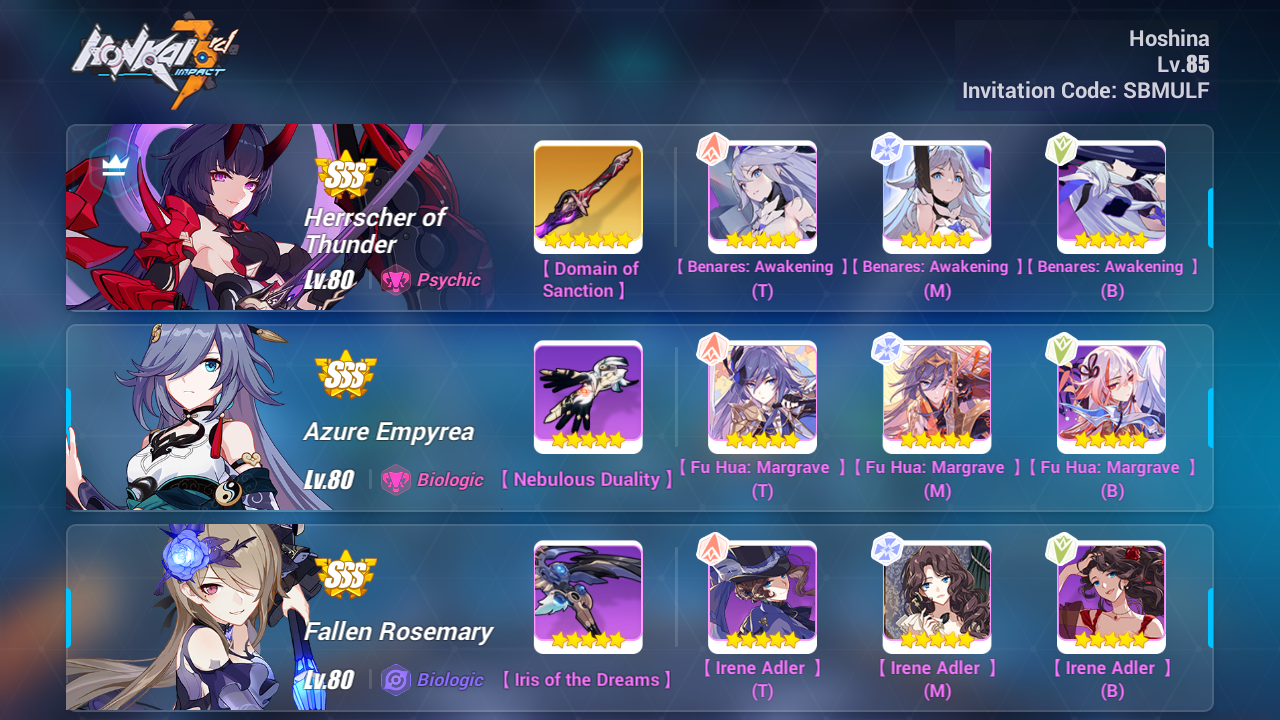 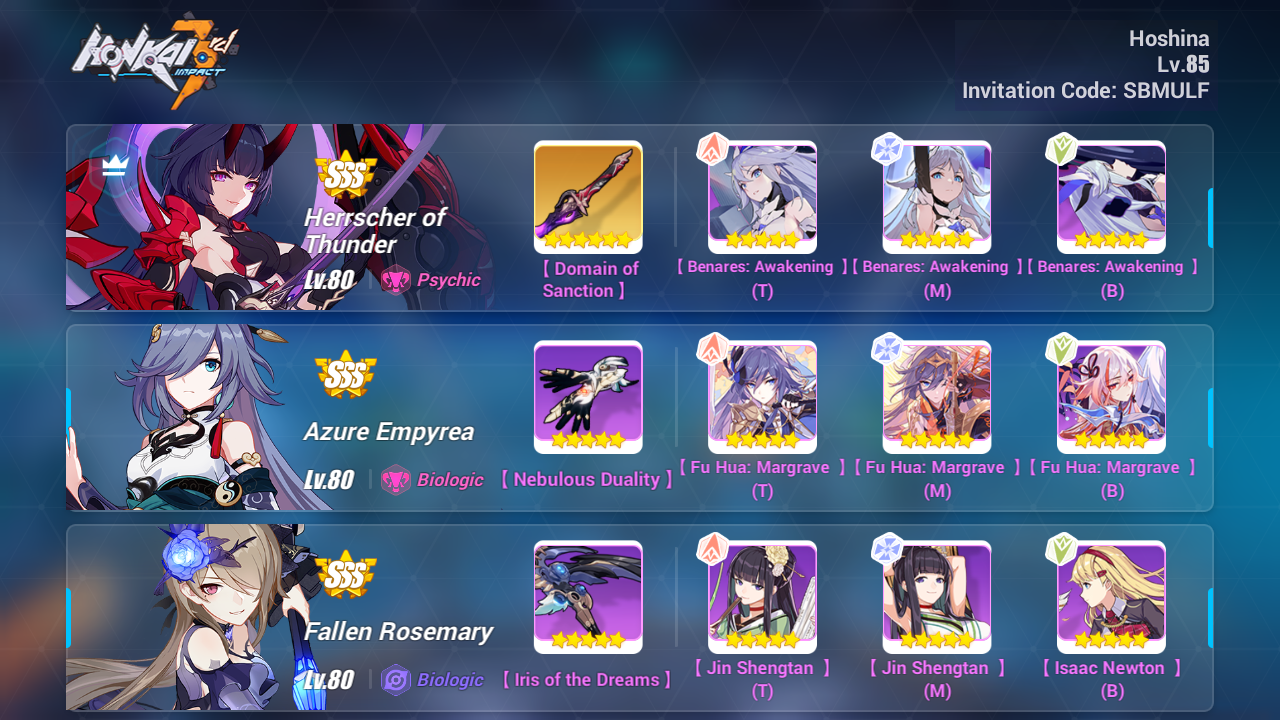 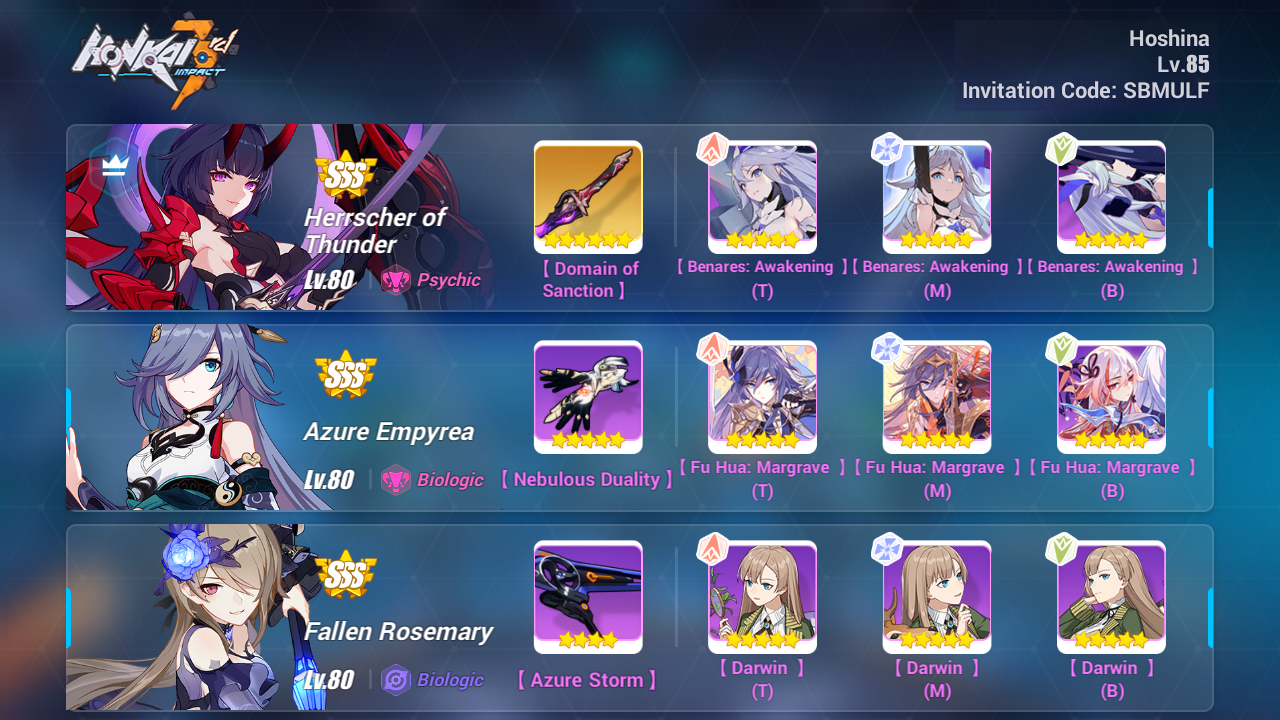 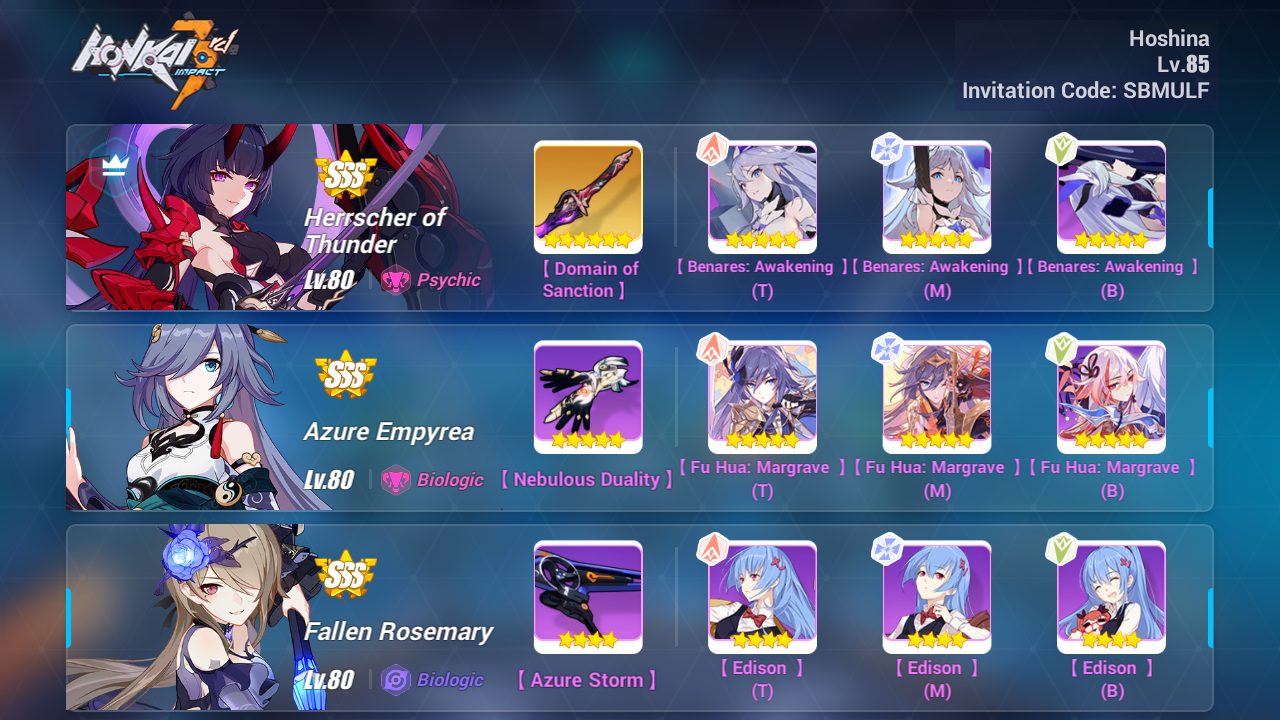 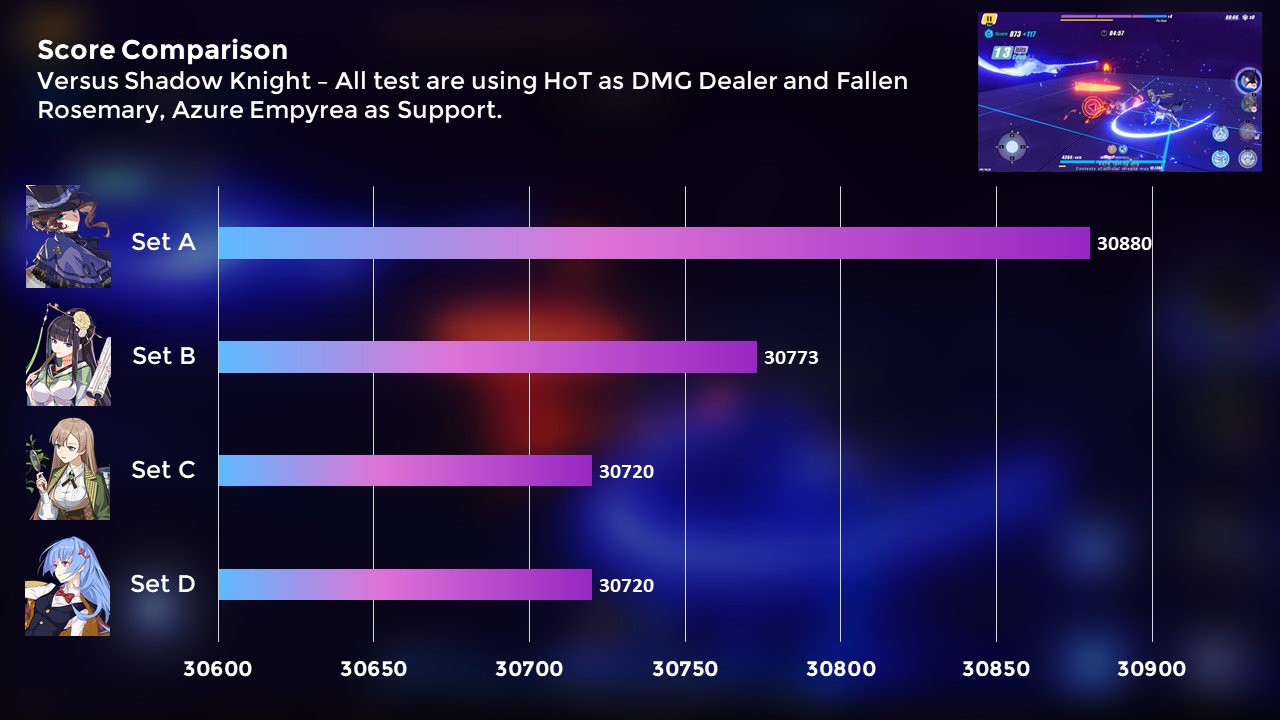 Fallen Rosemary is a very great addition in the elemental support Valkyrie especially in Lightning DMG team featuring Herrscher of Thunder. It was as if FR is created just to enhance HoT capabilities.

Not to mention FR is grindable alongside her weapon and stigmatas, making every Captain have a chance to upgrade their Elemental DMG team to a new step. 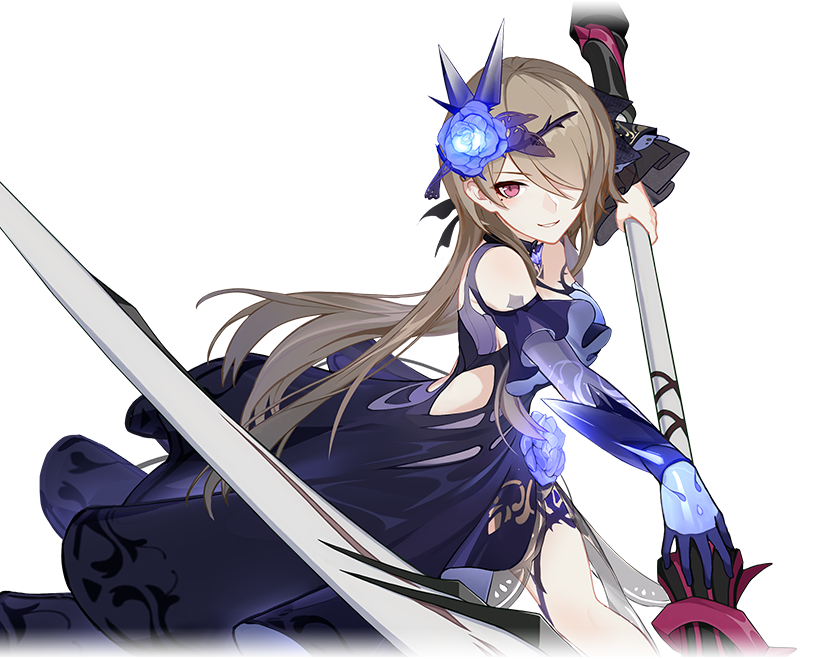