Domain of Sanction is the only PRI-ARM introduced in version 4.1. It is the most unusual PRI-ARM release in many ways: It is released on the same day with its 5* counterpart Key of Castigation, and it's also designed for the Valkyrie released in the same patch – Herrscher of Thunder. In this guide, we will go over the function of the weapon, and whether or not you should spend your limited resources to upgrade your Key of Castigation – after you've spent thousands of Crystals to pull it in the first place.

For more on Herrscher of Thunder, check out my video guide:

[SP: 0][CD: 15s] Unleashes a long-range forward slash, dealing 1500% of Lightning DMG and paralyzing enemies for 5s. The wielder is invincible while casting this skill. When equipped by Herrscher of Thunder, it also inflicts Narukami's Mark on enemies for 15s; and this skill can be chained into Shinzan Strike (Special Combo ATK). When riding the dragon, Bombard (Combo ATK) deals 40% bonus Lightning DMG.

Unsurprisingly, this weapon gives Herrscher of Thunder an insurmountable amount of bonuses:

Compared to Key of Castigation, this weapon contains a variety of upgrades:

With Domain of Sanction's myriad of bonuses, it unsurprisingly beats MAG-Typhoon and all other weapons in terms of damage output for HoT: 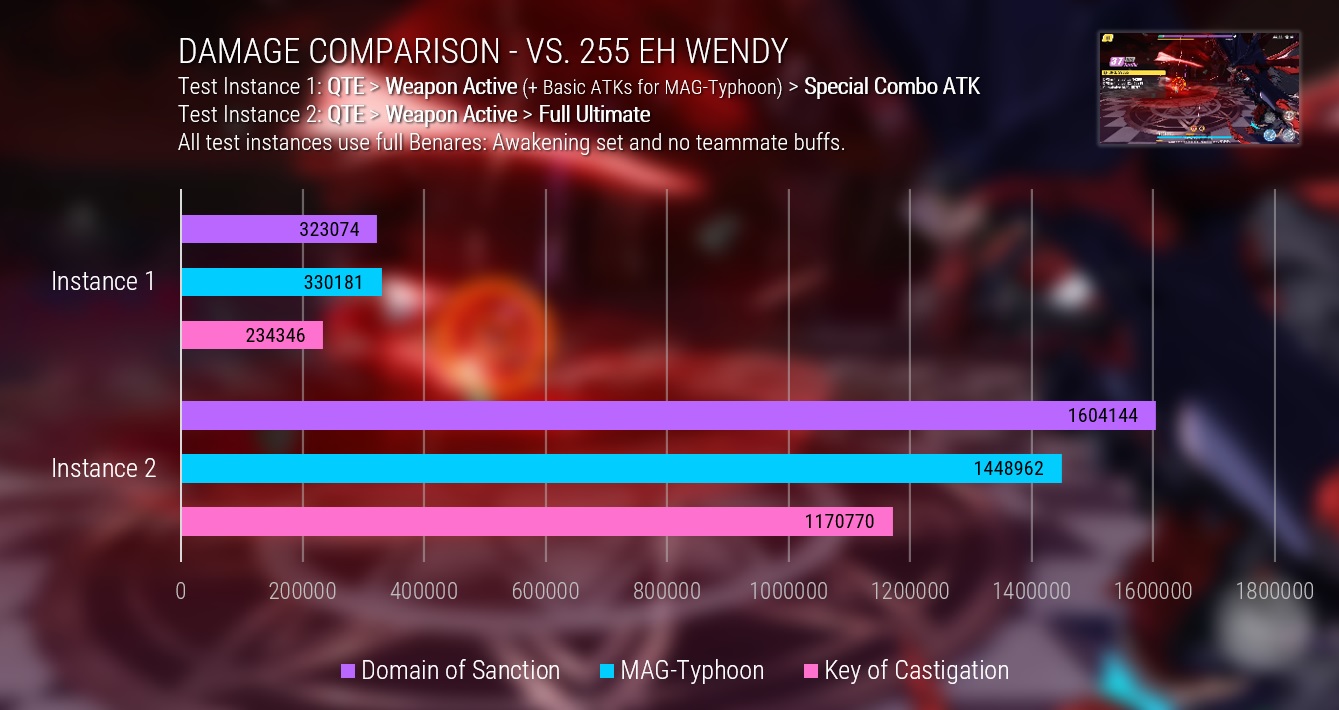 (Only the third-stage Active Skill is used for MAG-Typhoon)

Here are some video examples of HoT making use of Domain of Sanction:

Once again, I'm not calling her DJ.

In the hands of any non-HoT Valkyrie, the usefulness of this weapon drops in an unsurprising way. Apart from the stat buffs and Active skill's damage, these are the only bonuses applicable to Kasumi:

In Honkai boomer language, it translates to a 1.74x multiplier.

In reality, however, all setups with Kasumi also requires Lightning Empress and her Conductive debuff, which makes enemies take a whopping 70% more Lightning DMG. Domain of Sanction's 20% Total DMG bonus will not be diluted with this, causing better scalability.

If we add Conductive into the above calculation, Domain of Sanction will give a 2.96x multiplier, while MAG-Typhoon only gives a 2.93x multipler.

The calculation gets more complicated the more teammates/stigmas we add in, but in most situations, a setup with Domain of Sanction will deliver 5 to 10% higher damage multiplier than one with MAG-Typhoon.

With that being said, considering the high potential cost of Domain of Sanction, it's not recommended to get this weapon for Kasumi unless you are also planning to get Herrscher of Thunder.

For a support character, a weapon with better support capabilities is better than one with higher damage. And MAG-Typhoon has an invaluable support skill: Instantly applies Conductive debuff on enemies by casting Active skill.

Domain of Sanction does not provide a similar effect, and thus should not be used by Lightning Empress.

The first and foremost requirement on crafting Domain of Sanction is having Key of Castigation in your Weapon library. At the time of writing this, this weapon can only be obtained from Focused or Expansion Equipment supplies.
Next, you need to sacrifice a Lv.50 Katana that wasn't acquired from Events or with AE Imaginons. As such, weapons like One Salty Tuna or Plasma Kagehide are not applicable.

I have used the word “unsurprising” a bit too often in this article, and I believe it's the most fitting word to describe Domain of Sanction. Its purpose is being Herrscher of Thunder's signature weapon, and to make Key of Castigation better than the already-popular MAG-Typhoon, Mihoyo had no choice but to release its PRI-ARM on day one. And as a result, players are forced to spend an additional layer of resources to bring their Herrscher to optimal performance, after having spent thousands of Crystals to pull her equipment in the first place.

This weapon speaks volumes about the balancing issues that current PRI-ARMs have. Some PRI-ARMs are huge performance upgrades (MAG-Typhoon and 11th Leitourgia), others are straight up mediocre (Tranquil Rhapsody and Endless Voiders), and then there is Domain of Sanction, whose purpose of being a PRI-ARM is only to beat another PRI-ARM. That's not to say Domain is a bad weapon – it's still a must-have for your Herrscher of Thunder. I only hope Mihoyo will do a better job of balancing PRI-ARMs in the future.