Greeting, Captains. Back from Arc City, Theresa realized the strong power of Rita’s the 4th Generation Valkyrie Gods bane-class Battlesuit-[Argent Knight: Artemis] and held the meeting with the crews to discuss the measures in the future encounter. During the meeting, I tried to erase the tension by bring up the idea, deployment of Theresa’s 4th generation battlesuit and people were laughing. It works, but Theresa got made and gave me a SSS rank difficulty assignment that digging out every single detail of Rita’s battlesuit. And I just want to say “Sorry, Teri, actually I am a big fan of Rita. It's a reward for me instead.” Today I would like to share the data I collect with the captains who have the same interest. 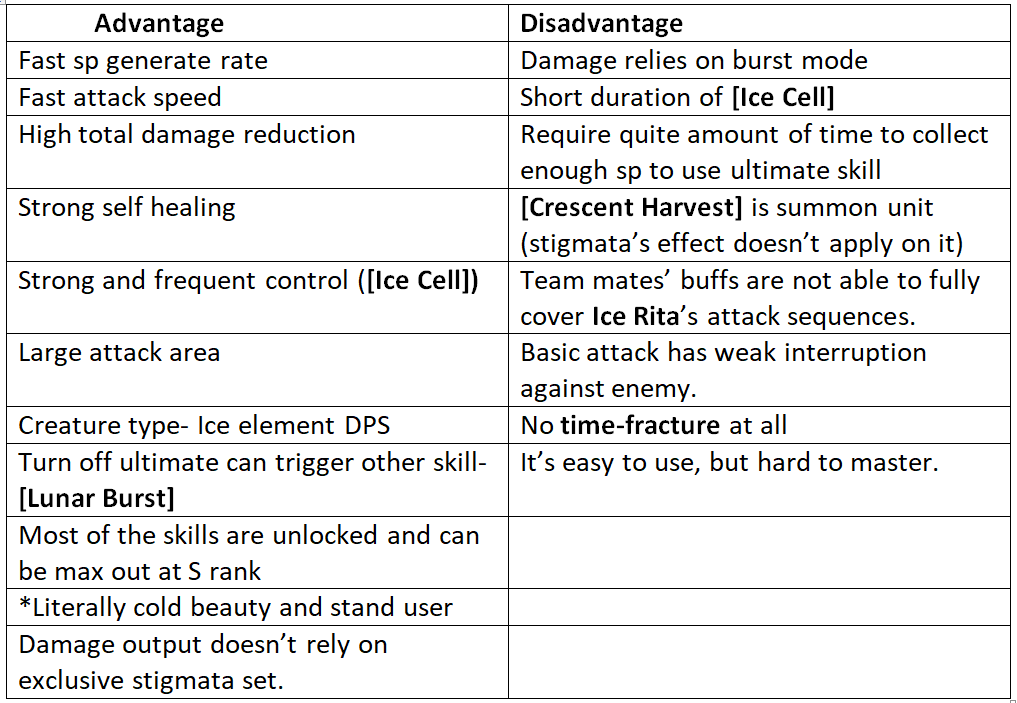 Overall Argent Knight is an enhanced version of Sakura Rondo. The play style is also to put two stacks of mark during basic attacks and dealing large amount of damage by removing the mark with charge attack. In this case, the mark Ice Rita applies is called [Hypothermia]. Before we further explore its features, let’s learn how the mark of [Hypothermia] looks in the game. 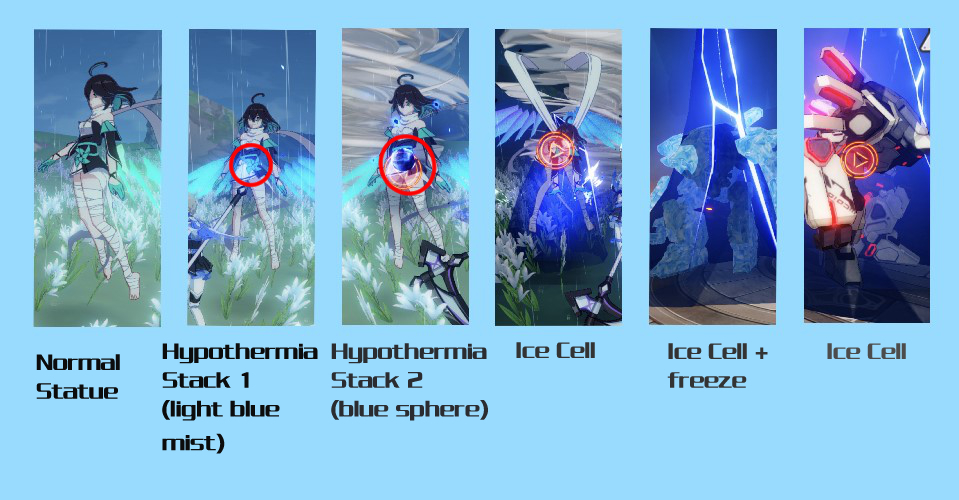 large AOE and can seal enemies in [Ice Cell] for 3s. Unlock SSS rank skill, [Frost Cell], can extend the duration of [Ice Cell] caused by [Lunar Burst], but this won’t apply to the regular [Ice cell].

Just like other DPS characters, the skill factor also takes an important role on Ice Rita’s play style. Next we will do some calculations together and compare them to each other, and develop the attack pattern to maximize Ice Rita’s damage output. (Unless it is specified, the following calculation doesn’t include Stigmata’s effect and build-in multipliers and leader skill.) 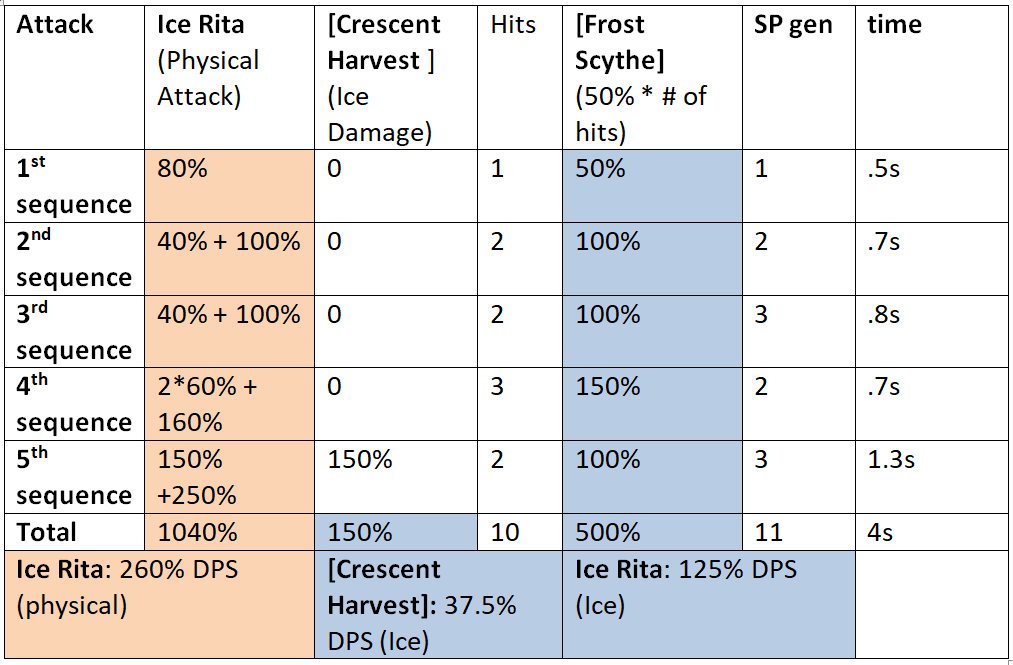 Judging by the numbers, basic attack is not the main source of dealing damage especially physical damage is heavily weighted.

Building up sp and putting 2 stacks of [Hypothermia] are the main purpose of doing basic attack. And 2.75 sp/s gain rate is pretty decent.

The 5th sequence attack can put one stack of [Hypothermia], but it’s time consuming since [Hypothermia] will be applied in the last hit of the basic attack which takes like 4s.

The feature that tapping attack button can continue the attack sequence after dodge makes maintaining combo easier and avoids starting the attack sequence from the beginning again after dodging enemies attack. (This feature won’t work if you input multiple times of dodge or direction key.)

*4th sequence attack can gather enemies in small area, but the duration is really short.

Charge attack can make a short distance shift and it is an AOE skill which means damage and [Ice Cell] can apply to multiple enemies, but the 3 sp gain only applies once regardless the number of enemies. 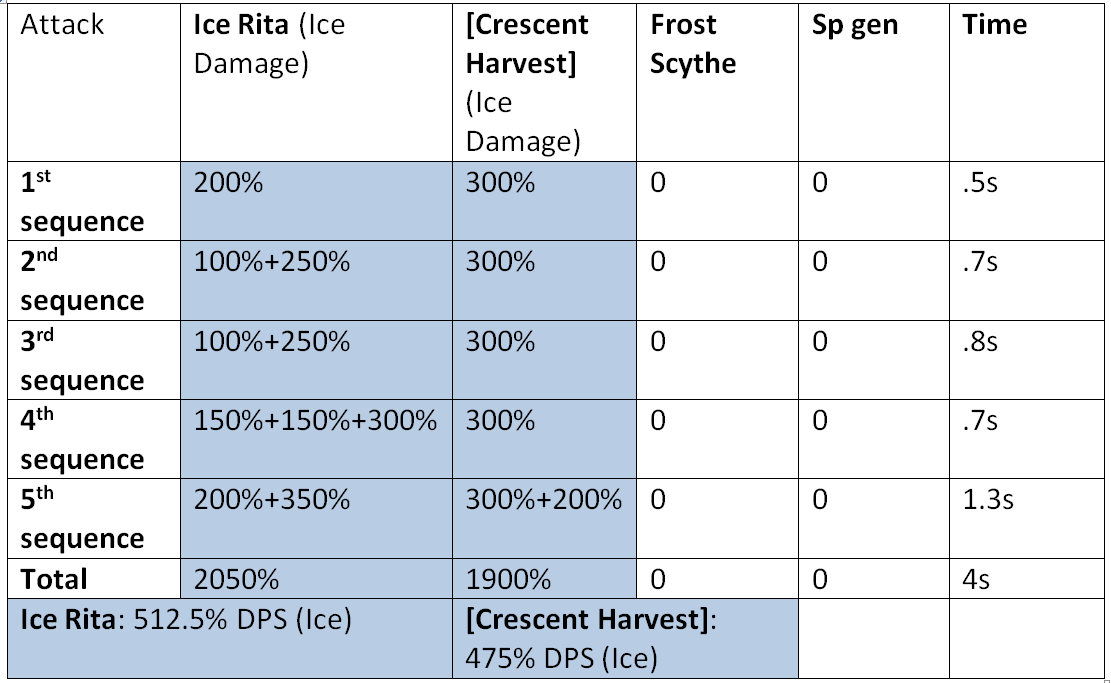 Summing up the number, Ice Rita and Crescent Harvest can deal 987% damage per second. Again stigmata don't apply effect on Summon Unit. So the damage made by Crescent Harvest will be discounted in real battle.

Obviously it is the highest DPS among other actions.

Burst charge attack can shuffle through enemies and interrupt them, and shift in long distance. However, no sp gain after removing 2 stacks of [Hypothermia].

In Ice Rita’s normal statue, basic attack is pretty much just for gaining sp and perform ultimate evasion can speed up the process.

In burst mode, some features of the attack have been changed.

1. [Crescent Harvest]’s 2nd and 4th sequence attack can apply one stack of [Hypothermia]

The changes above make the attack pattern to produce maximum damage in BURST MODE situational. 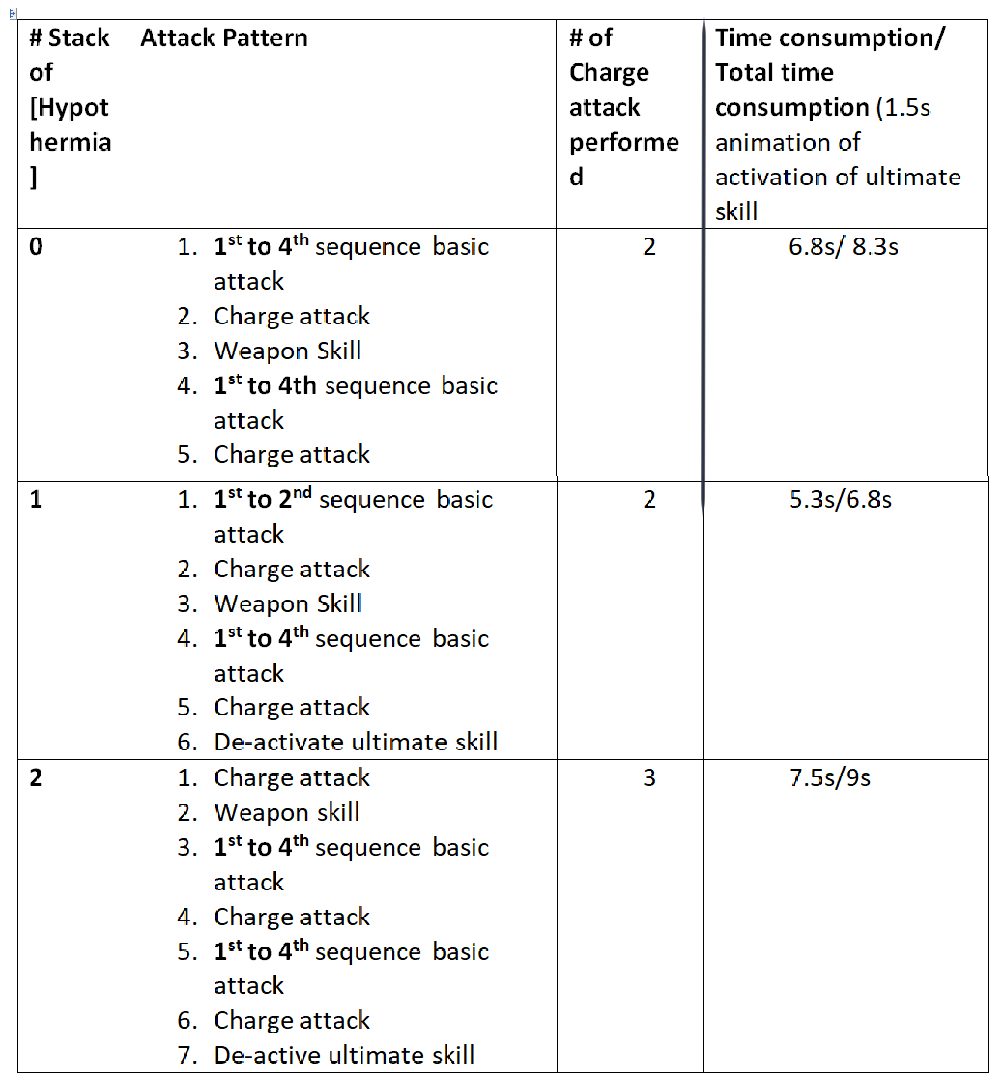 Probably you may wonder why those attack patterns are all 2 cycles of attack. That’s because the number of attack cycle is determined by the time that sp consumption being raised. Ice Rita’s damage output highly replies on the ultimate skill. Consuming more sp will affect the time coverage of using ultimate skill during the battle. Unless it’s about to finish the enemy, more than 2 cycles of attack is not recommended.

Even though attack speed remains the same during burst mode, the new features of the attack do actually speed up putting 2 stacks of [Hypothermia] on enemy. On the other hand, it makes the increase of attack speed more significant.

*The test stage is SS Hellmaru in MA.

*Affix may take an important role in the result.

Firstly, this guide is made for beginners to use Ice Rita properly. Neither pure basic attack nor pure charge attack can perform the best result. The concept is to perform charge attack whenever you see the blue solid sphere on the enemy during burst mode. However, in real battle, the method is not as straight or easy as it sounds. Due to the feature that Ice Rita’s basic attack can remove [Hypothermia] stack 2 during burst mode, wrong timing of using charge attack will cause [Ice Cell] instead of 4*220% damage. The first challenge is [Crescent Harvest] is the one apply [Hypothermia] and its attack is always a little slower than Ice Rita’s. And the second challenge is Ice Rita will swing her weapon first and then dash to the enemy to remove the mark. So it means removing mark won’t happen immediately after you hold the attack key. In addition, dodge can cancel the swing and some motions of the attack. So press dodge after performing charge attack actually helps saving sp. In normal statue, press dodge key to cancel the action whenever u see the [Hypothermia] stack 2.

Overall, Ice Rita has average performance especially she is creature type in which the ceiling high DPS Valkyrie are. Her mechanics already makes her stay away from MA and her survival ability makes her abyss/Dirac Sea oriented.

Her low interruption on basic attack doesn’t give her stable environment to gain sp or do damage. Frequent dodge will mess up the pace of putting marks and makes DPS drop a lot eventually. Even though [Ice Cell] can stop enemies attack, enemy will resume the attack and Ice Rita still needs to either walk away or dodge.

Modification of Sp requirement and sp consumption rate of ultimate skill can balance Ice Rita’s performance easily while no need to change Ice Rita’s play style. Lower the amount of time in normal statue means more time in burst mode which is more DPS. In fact, the sp requirement dropped from 100sp to 80sp in Beta test. Her exclusive weapon and her sp gain rate and the 3sp from removing [Hypothermia] stack 2 are not bad, but most of them don’t work in burst mode. It makes sp affix important which works in burst mode.

Furthermore, the damage from removing [Hypothermia] stack 2 (4*220%) in burst mode doesn’t belong to burst attack which is similar to Miko’s ultimate skill. However, [Winter Harvest] (+60% Ice damage in burst mode) doesn’t apply in the calculation.

As a fan of Rita, I feel Ice Rita is fun to play with. Hope u guys make through the reading.