Greeting captains, in this 4.1 version we have a new battlesuit, and now it is time for Riden Mei to get her turn. As we already know in the latest main story, where she met the leader of the world serpent namely Kevin Kaslana. Kevin Kaslana tells Mei how to save his best friend Kiana by joining the World Serpen and at the same time tells how to get Mei's old strength back. As we have seen for a some reasons, kiana has a bad condition that allows her to lose his life. A moment after hearing that from Kevin Kaslana at the same time a terrible old power was awakened from the body of Mei, instantly Mei turned into a cold and very powerful figure. So that's the beginning story of the latest battlesuit that is Herrscher of Thunder (HoT).

Same as her precursor Herrscher battlesuit Herrscher of Void (HoV) and Herrscher of Reason (HoR), HoT came out with extraordinary strength. The type of HoT's attack is Meele and has Lightning Element and of course she takes the role of DPS or in other terms the type of battlesuit that we usually use to do a Tons of damage. As a DPS role, of course we need support to multiple the damage output produced by HoT. There are so many types of supports that can be used as a companion to HoT. But before that, we must know and understand every single skill she has.

In this following article I will show you all the skills possessed by HoT, starts from basic skills, combo, special combo, passive, ultimate, and several other unique skills, At the same time I will explain briefly and concisely about some of the unique skill mechanisms possessed by HoT . Okay, without further ado, just go to this following article:

Herrscher of Thunder (HoT) is the latest S-Rank Batllesuit in Honkai impact 3 version 4.1.  HoT is a physic type battlesuit, a type of meele lightning attack and acts as a DPS. Like other herrscher-type battlesuit, HoT appears with enormous strength. Most of the HoT's damage comes from combo attacks, Ultimate, and the effects of it's active weapons found on its signature weapons. Another advantage possessed by HoT apart from the large damage that is produced is that she can make enemies exposed to paralyze debuffs, can trigger Time fracture, has fast attack speed, and burst-type Ultimate that make it possible to produce large damage in a long duration. 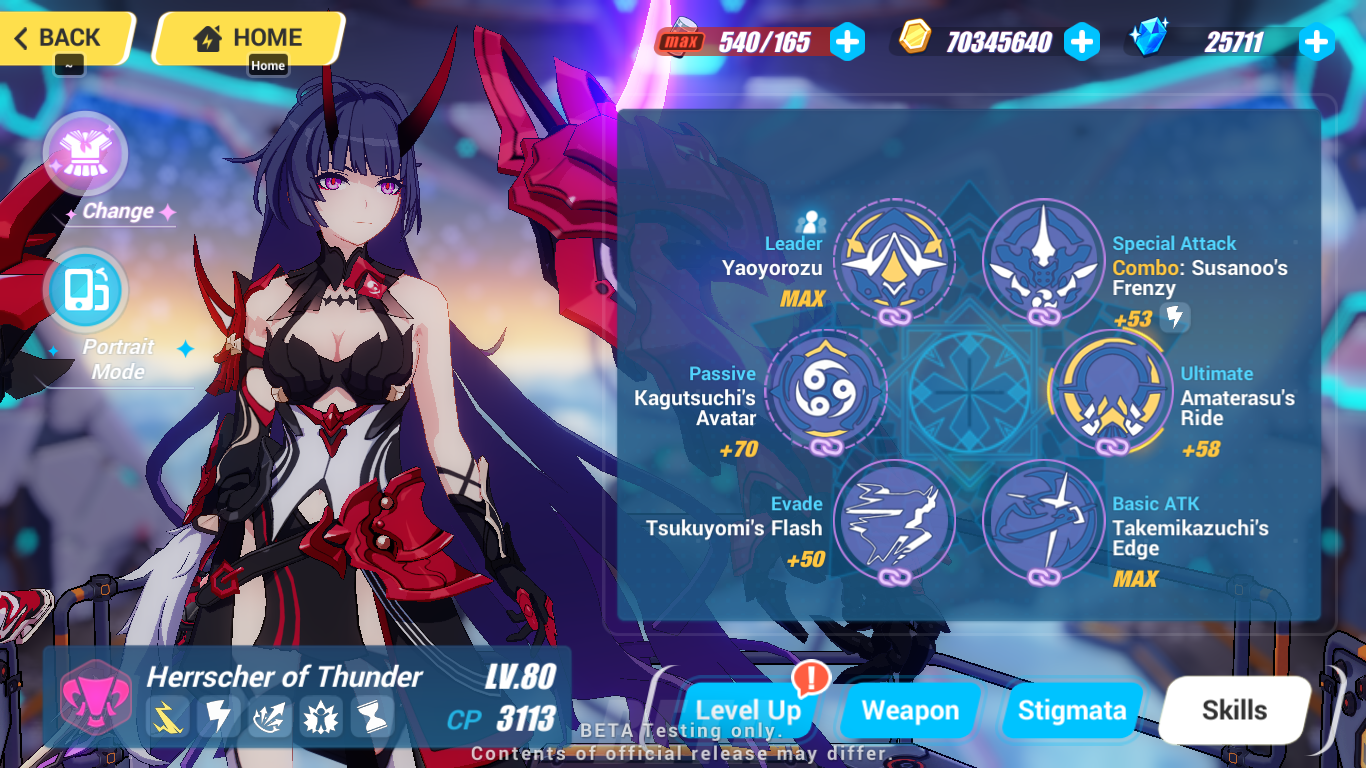 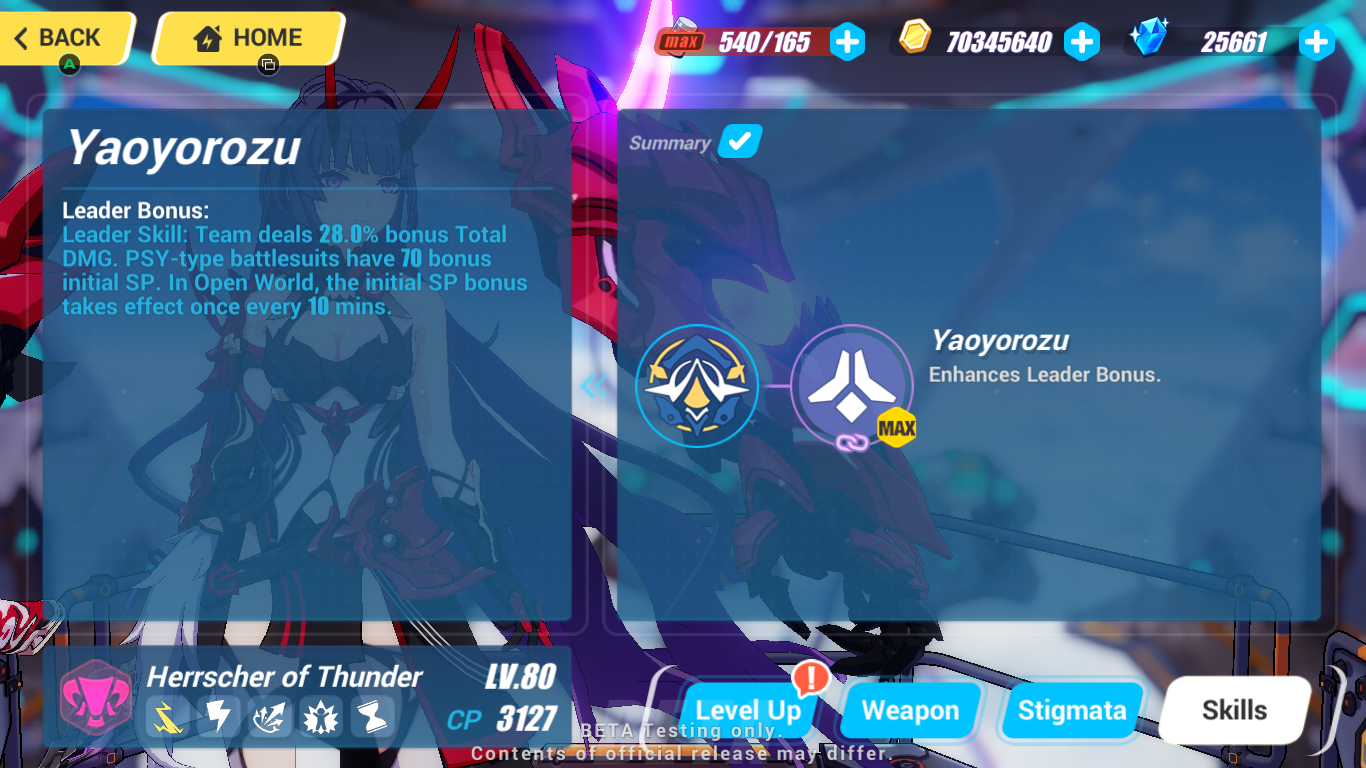 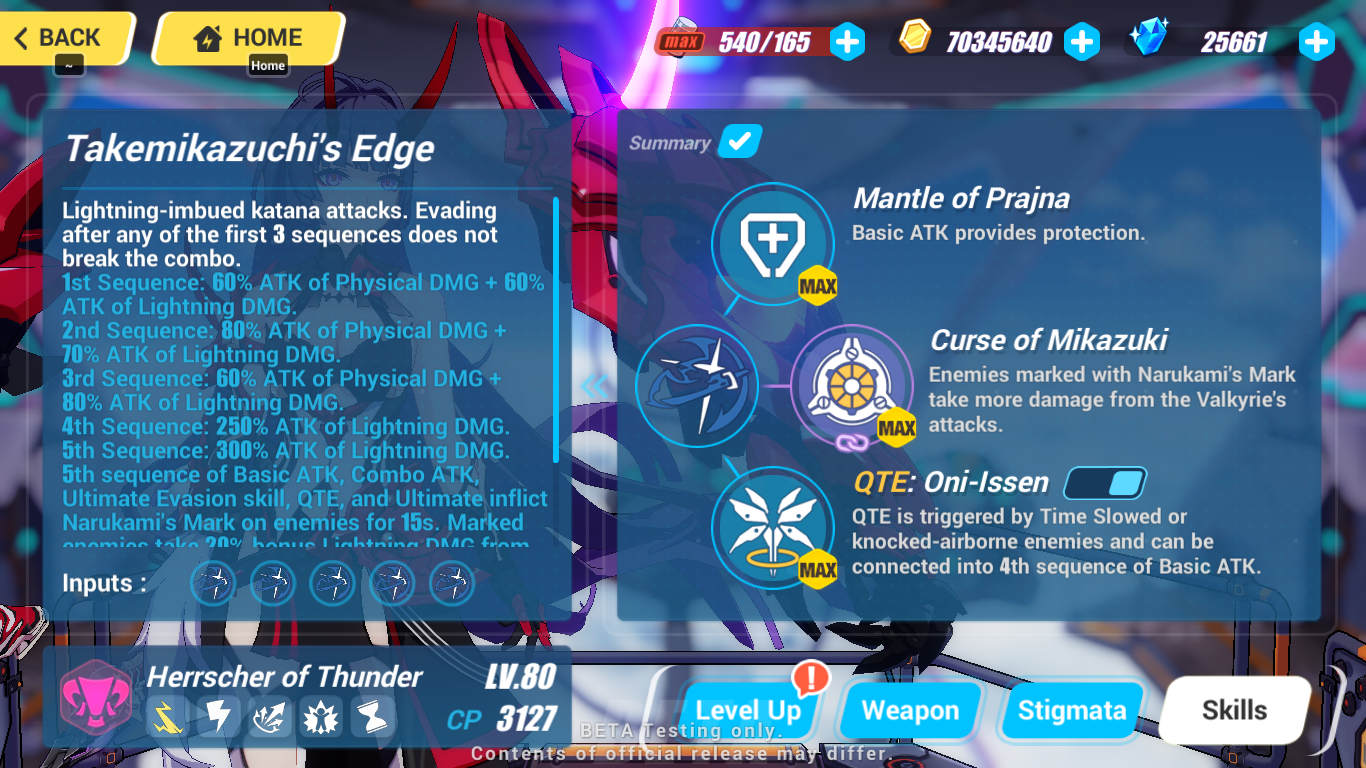 There are several terms that you must remember because it is very important to maximized HoT performance, namely Herrscher Charge and Narukami's Mark. Herrscher Charge is a bar located above the HoT's HP, it is very important to fully fill this skill to activate special combos that have a large amount of DMG. Keep in mind that if you want to fulfill the Herrcher charge through basic attacks, you need to activate the Narukami's Mark skill first.

Narukami's Mark will result in an additional DMG for HoT's attacks. If you see a unique sign on the enemy's body, then this skill is already active. You can activate this Narukami's Mark skill through the 5th sequence of Basic ATK, Combo ATK, Ultimate Evasion skill, QTE, and Ultimate. 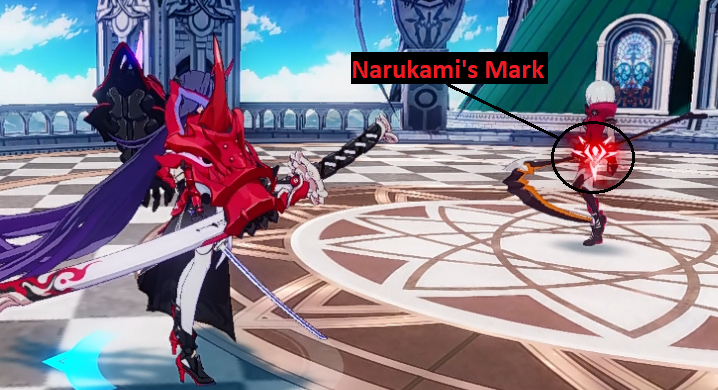 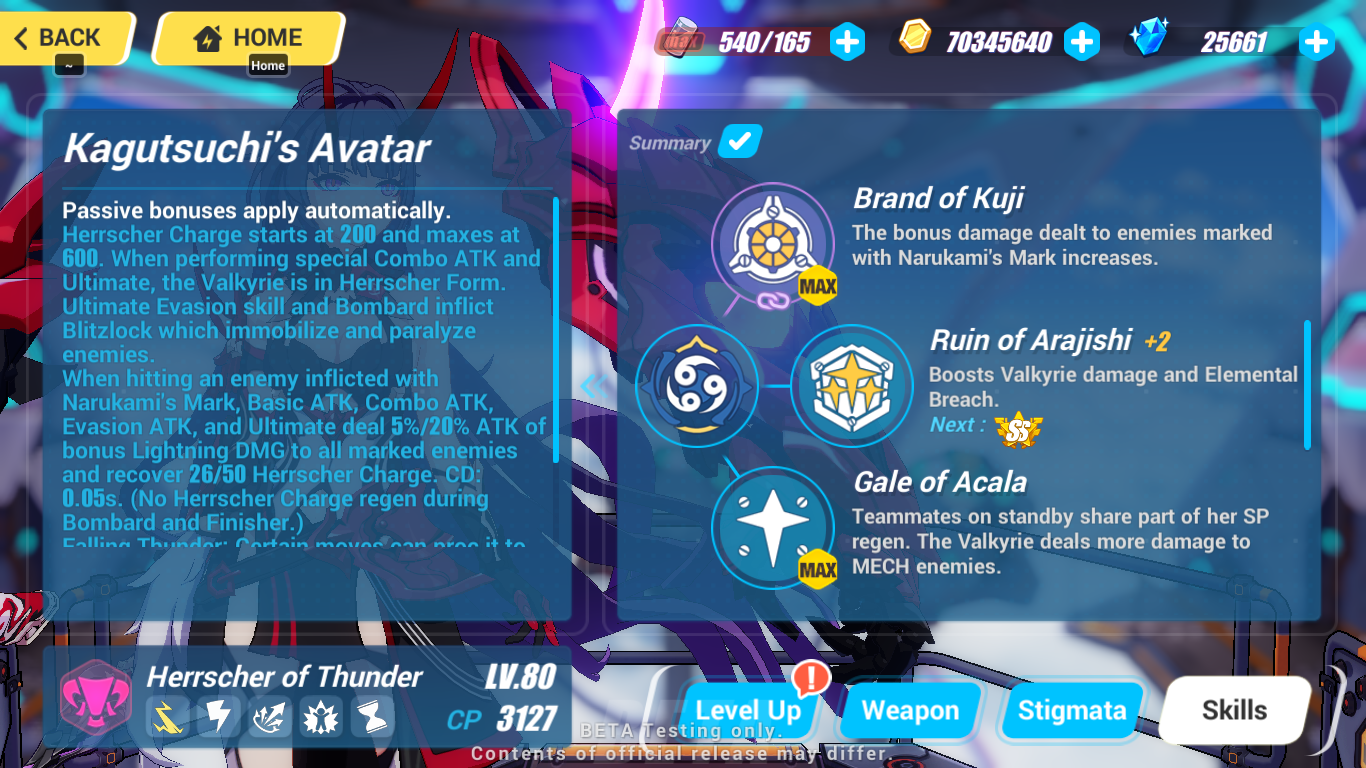 Kagutsuchi's Avatar, Passive bonuses apply automatically.
Herrscher charge starts at 200 and maxes at 600. When performing special Combo ATK and Ultimate, the Valkyrie is in Herrscher Form. Ultimate Evasion skill and Bombard inflict  Blitzlock which immobilize and paralyze enemies.
When hitting an enemy inflicted with Narukami's Mark, Basic ATK, Combo ATK,  Evasion ATK, and Ultimate deal 5%/20% ATK of  bonus Lightning DMG to all marked enemies and recover 26/50 Herrscher Charge. CD: 0.05s. (No Herrscher Charge regen during Bombard and Finisher.)
Falling Thunder: Certain moves can proc it to deal 10% ATK of Lightning DMG per 0.2s to all enemies marked with Naaarukami's Mark and restore 10 herrscher Charge. Subsequent procs will extend the duration.
Brand of Kuji, When the Valkyrie attacks enemies inflicted with Narukami's Mark, the bonus Lightning DMG increases to 10.0%/40.0% of ATK.
Ruin of Arajishi , The Valkyrie deals 12.0% bonus Lightning DMG. In Herrscher Form, Elemental Breach is boosted by is boosted by 12.0%.
Gale of Acala, When the Valkyrie is deployed, teammates on standby restore 10.0% of SP obtained by her. The Valkyrie deals 30.0 bonus Total DMG to MECH Valkyrie deals 30.0% bonus Total DMG to MECH enemies.

Again, it is mentioned here that Narukami's Mark will causes more DMG to enemies, so it is very important to understand how this unique skill works. The skill named Gale of Acala allows HoT to dealt more bonuses DMG to MECH type enemies, so you don't need to worry anymore about MECH type enemies, pure DMG itself is already extraordinarily large, with this skill will definitely kill those MECHs twice, LoL

And yeaahh we come to one of the biggest DMG producers after Ultimate, yes, Special Combo ATK - Shinzan Strike. To remember that to trigger this skill you need to fill the Herrcher Bar first. Normal ATK combos are also important especially when dealing with Paralyzable enemies, because when your hit count is above 75 normal combo ATK will make enemies receive paralyze debuff effect. Combo ATK and Special Combo ATK inflict Narukami's Mark. When performing special Combo ATK, the Valkyrie is in Herrscher Form. 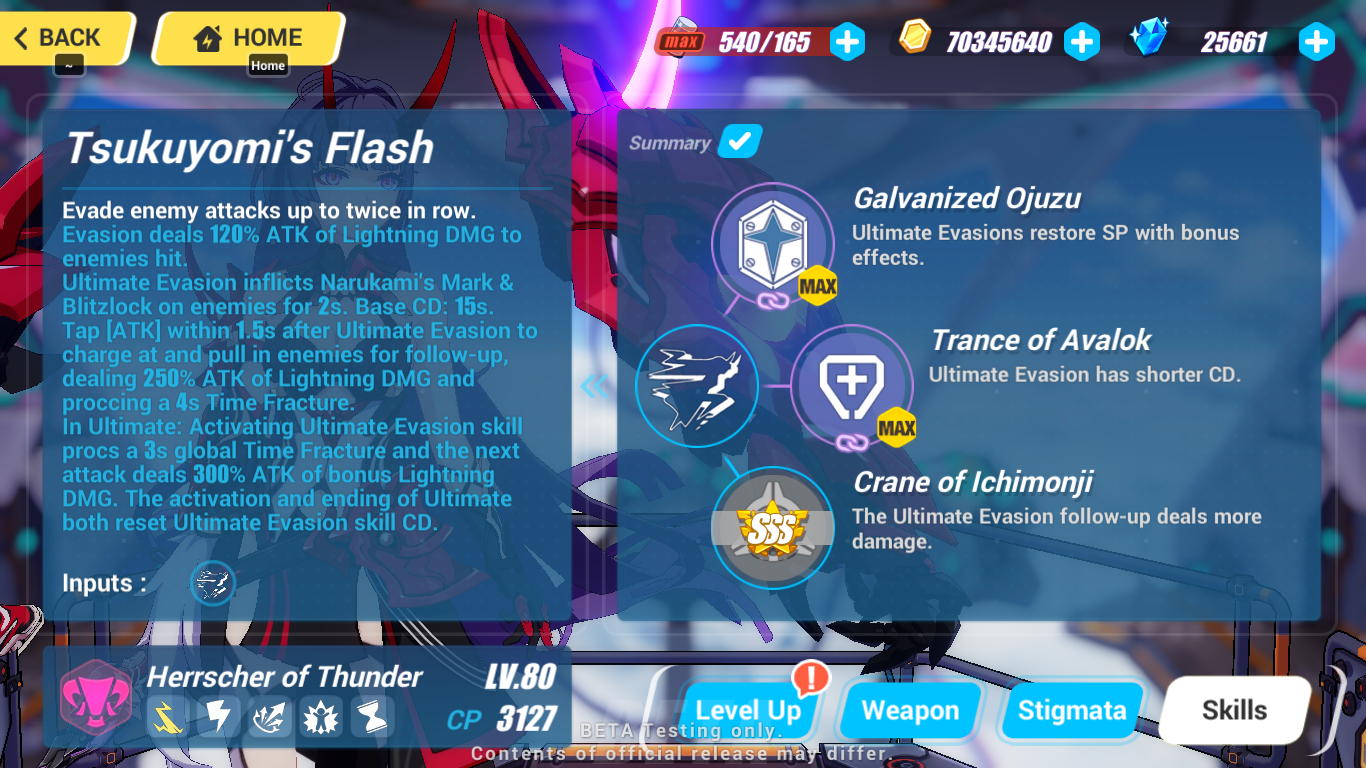 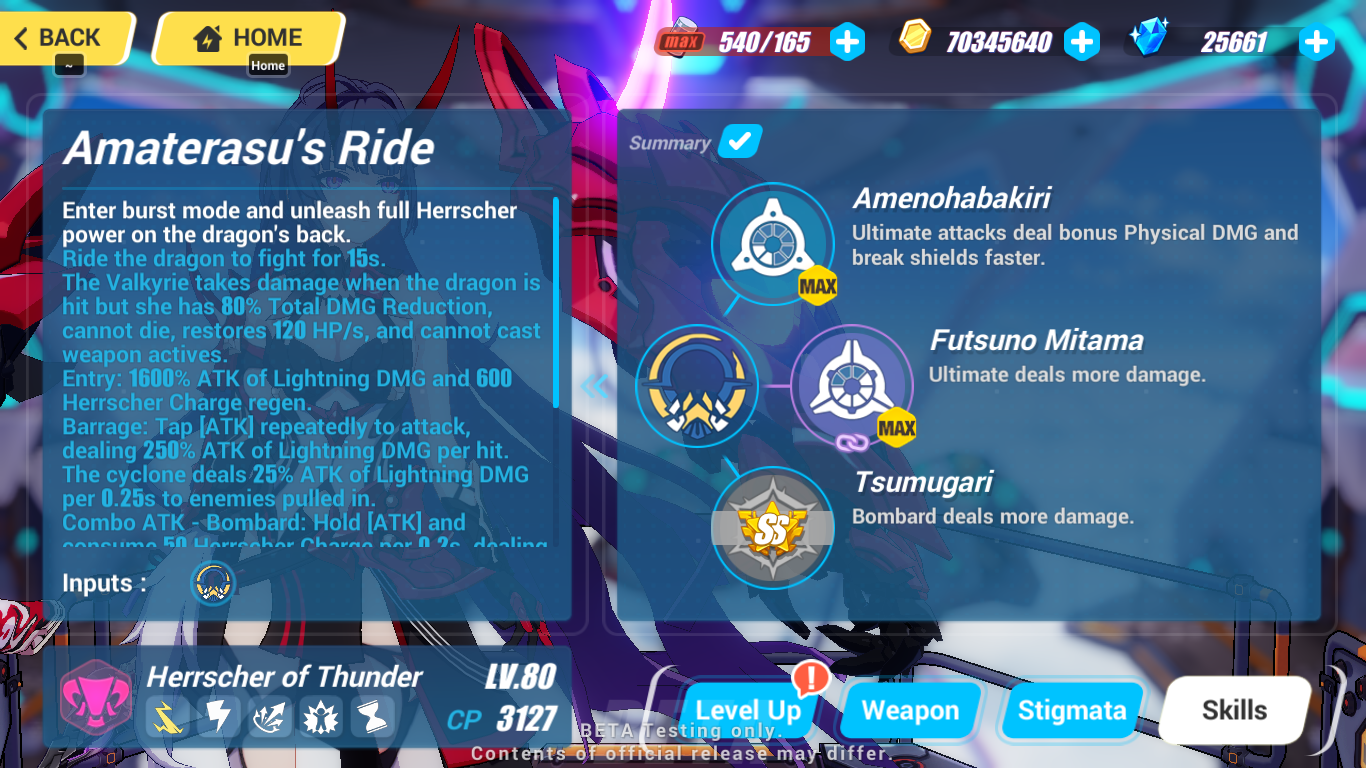 The biggest damage produces by HoT is at the entry of the dragon (Ultimate skill), use Barrage to gather enemies while filling Herrscher Charge, when the Herrscher charge is filled use Bombard. While the ultimate is active, press the evade button to immediately activate the ultimate evasion and procs global time fracture for 3s. When performing Ultimate, the Valkyrie is in Herrscher Form.

At the time of the appearance of HoT she was immediately got her own weapons and Stigmata that you can get in Equipment Supply or Expansion Supply by using some crystal.

There are 2 versions of weapons, it is Non-PRI version and PRI version

Note: Stats and skill effects listed below are descriptions for weapon level 50 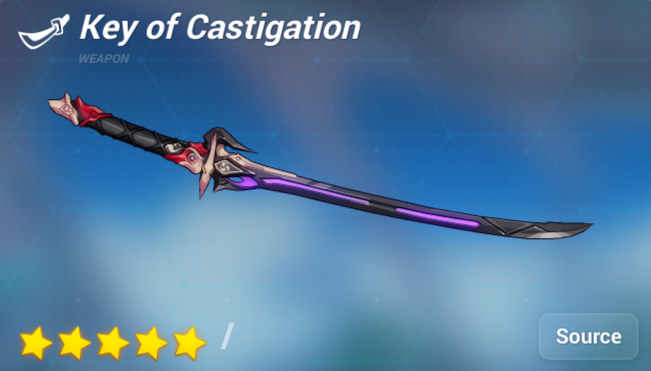 Having this weapon will definitely make it very easy for you to fill the herrscher charge and also apply Narukami's mark effect instantly with it's active skill.

Note: Stats and skill effects listed below are descriptions for weapon level 65 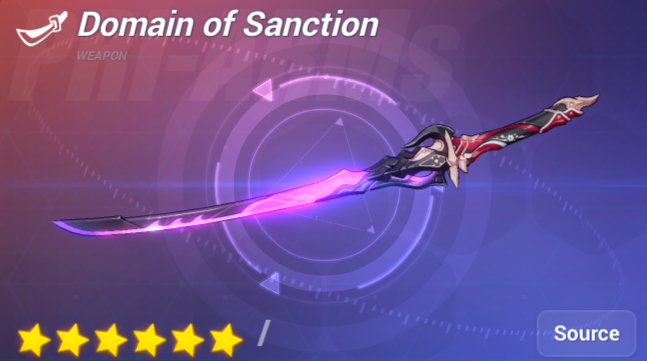 Also can be connected into Special Combo ATK

Has the almost same effect as the Domain of Castigation, but with a larger DMG output and also some additional special effects for the HoT. Active weapon skills can result in additional DMGs during the 20s duration, so it's better for you to activate the weapong's active skill first before releasing Special Combo - Shinzan Strike or other series of ATK 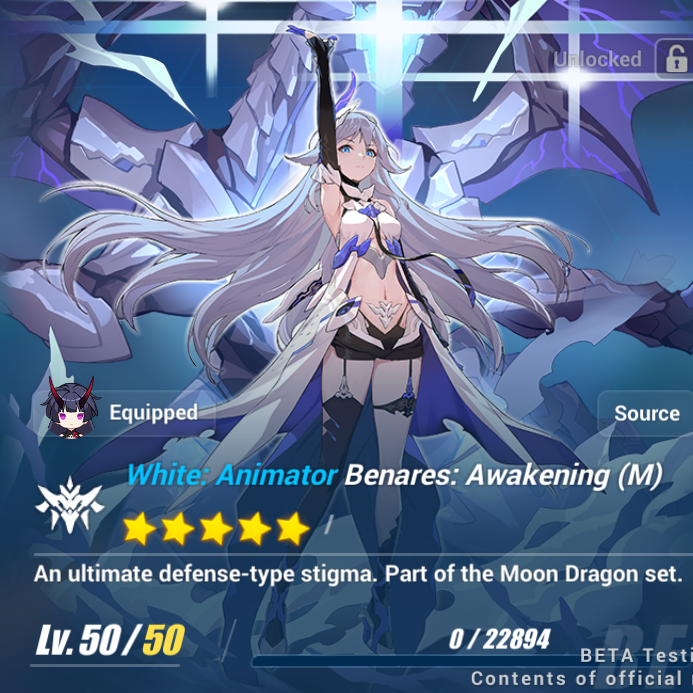 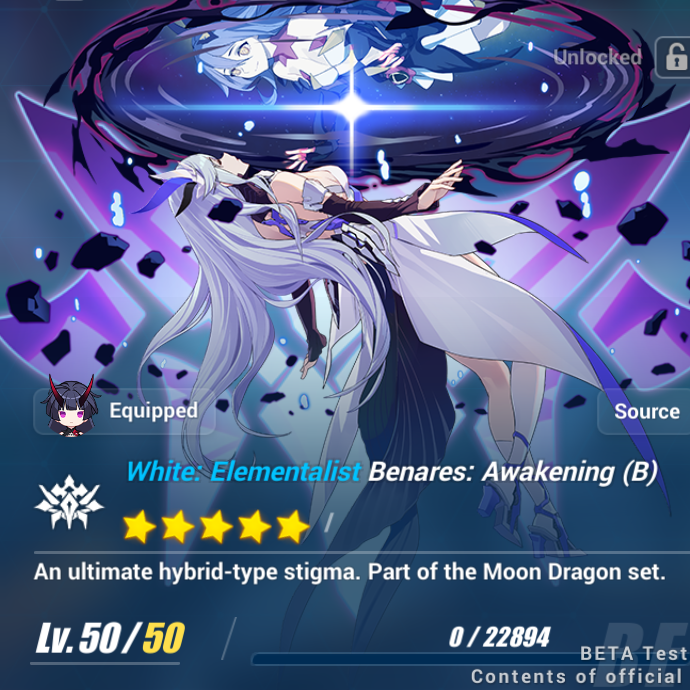 If we look at the stigmata's effect, most of it have an effect on DMG lightning boosts by x%. All of the pieces have no bad effect, so using the whole piece or using 3 pieces at once is the best choice, no doubt that this stigmata will have a major impact on the HoT in terms of the DMG lightning produced.

But if you don't have one or all of the above sets of stigmata and its weapon signature, there's no need to worry. I have tried to use economic equipment such as Magstrom for weapons, and other 4*star - 5*star stigmata that have almost the same effect as Benares Awakening, and the results are still good. The result DMG is still large even though it is not as large as the equipment signatures.

After you read the full description, here I will give you a few examples of how to play Herrscher of thunder correctly. This is my gameplay against Hephaestus in the memorial arena stage exalted tier, pay attention to the sequence of attacks that I have done.

By understanding each skill and the effect it produces, you will be able to unleash all the potential possessed by HoT itself. Given that the DMG generate by HoT is already large if you use it correctly, you can still increase the total DMG using buffs and debuffs to the enemy by the helps of other support battlesuits. It's not enough with the support battlesuits , you have to choose the right support equipment that suits the conditions in the field. There are also many support battlesuits that can help HoT's works, such as Azure Emperya; Phoenix; Wolf Dawn (SS rank min); Phanton Iron; and there are still a few more that can increase DMG from the HoT. For support equipment you need to pay more attention which are the suitable equipments that can apply element buff effects (especially lightning element) to HoT or equipment that can apply debuffs to receive more elemental DMG (especially lightning) to enemies.

The option above is the best choice for general HoT's support, of course there are certain conditions that allow you to be more creative in choosing support battlesuit and its equipment in order to get more effective results, not depending on what I explained above, but this case is rarely appear. Henceforth I will also make another article to discuss this issue.

Herrscher of Thunder (HoT) is the newest S-rank physic type battlesuit, it's class is DPS meele lightning element. HoT produces unusually large DMG output as expected from the Herrscher type battlesuit. She has several skills that are not too difficult to understand and better yet she is not too difficult to operate with. Another advantage of  HoT is, she can causes paralyze effects on enemies, can trigger Global Time fracture, fast attack speed, and Burst mode Ultimate so that she can cause a large DMG in a certain time duration.

Her signature equipments, including weapon and stigmata, effecting in a amount of DMG addition to HoT, most of its applied Lightning DMG buffs to HoT itself and there were also several debuffs generated to the enemies. For those of you who don't have her signature equipment, you don't need to worry, because there are still many alternative and economic weapons and stigmatas available to be paired for HoT. In order to produce a larger DMG, you must choose support battlesuit and support equipment that are suitable for the stage/field conditions.

And finally let us pray for the happiness of all of the characters in Honkai Impact 3 especially for our cutie little princess kiana :)))) 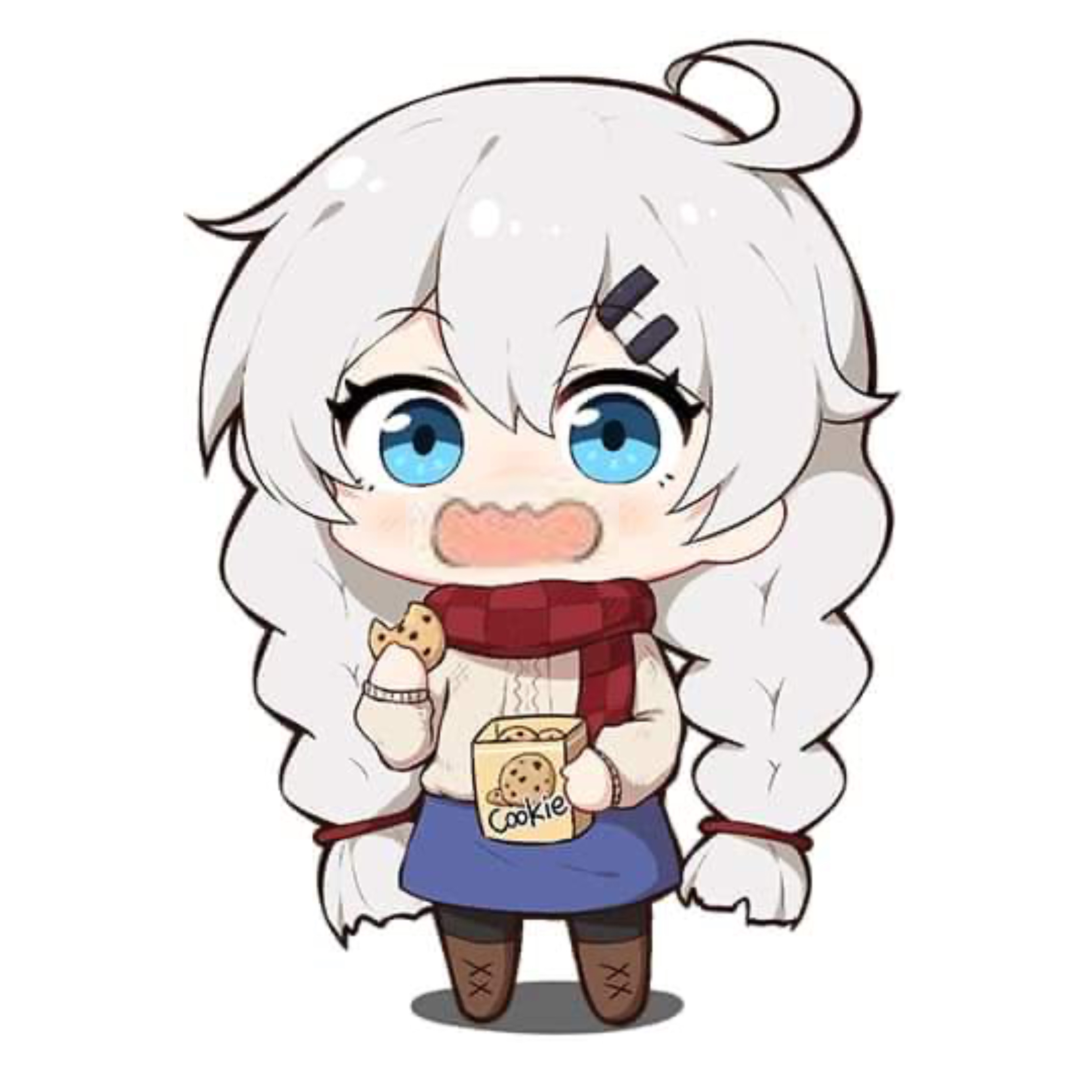