Bella is a base S-rank ELF, meaning it starts off with 2⭐, and can be ranked up to a maximum of 4⭐. Additional ranks will provide Bella with additional ATK stats and skills. In this guide, we will go over her skills and abilities, and how she performs compared to previous ELFs.

Bella starts at 2⭐, ranking up to 3⭐ requires 100 fragments, and from 3⭐ to 4⭐ requires 150 fragments. Each duplicate Bella card grants 105 fragments. In most cases 3 Bella cards will allow you to rank Bella up to 4⭐, assuming you received another spare 40 frags during the pulls.

Benefits of ranking up to 3⭐:

Benefits of ranking up to 4⭐: 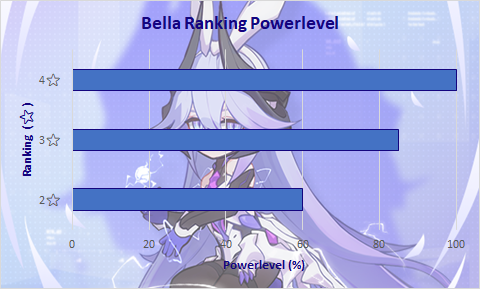 Bella's main focus is to increase the team's Lightning damage output. She has other abilities like paralysis and healing, but her paralysis is too short to be consequential and heals are mostly irrelevant at the moment. If you die, you can just restart the mission.

Bella's Lightning damage abilities are reliant on two factors. The “Fast Atk” requirement means the team leader must be either Herrscher of Thunder (HoT) or Shadow Knight (SK). Secondly, Bella scales great with additional ranking. From the base +8% Lightning dmg taken and +8% Elemental dmg, those numbers essentially double at 4⭐.

Bella's usage is not that complicated, you would want to sync her ultimate with your big damage rotations. These are usually either HoT's weapon active and combo atks or ultimate atks.

Side by side comparison

Bella is compared up against previous ELFs. The damage test is between each ELF ultimate vs a Wendy boss at QS Red Lotus 255 Intensity, with optimal Team synergy, and at maximum rank. 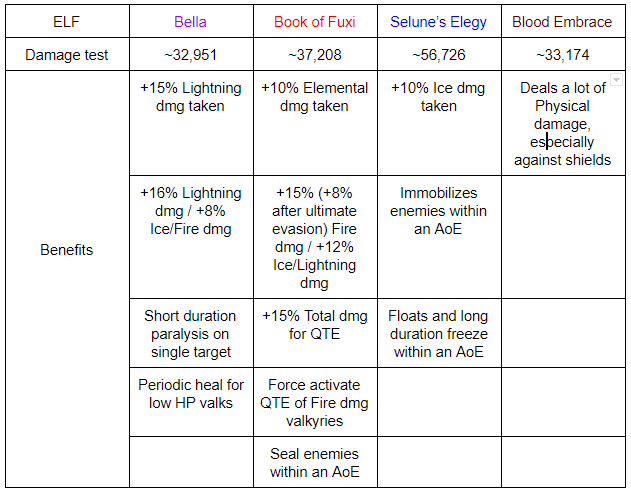 Bella is the clear optimal choice for Lightning damage teams. However, Bella is also far less versatile compared to Book of Fuxi. Fuxi can activate and buff QTEs, provide a strong AoE disable, and an universal +10% Elemental dmg taken debuff. Bella on the other hand is much more specialized. Most of her benefits are focused on Lightning damage, especially Herrscher of Thunder, who is, besides Shadow Knight, the only relevant Lightning “Fast Atks” team leader. Additionally, Bella is also far more reliant on her ⭐ ranks. She gains +7% Lightning dmg taken at 3⭐ and another +8% Elemental dmg at 4⭐, compared to Fuxi who was quite strong right at 2⭐. In fact, if you compare 2⭐ Fuxi to 2⭐ Bella, you would not find too much difference. For Lightning teams, Fuxi would provide +10% Elemental dmg taken, +15% QTE dmg, an AoE seal, and +6% Elemental dmg if Azure Empyrea is leader. In comparison, Bella would provide +8% Lightning dmg taken and +8% Elemental dmg if Herrscher of Thunder is leader. Bella only really pulls ahead if taken up to 4⭐.

Bella is not a good investment for most captains, especially if she would be your first gacha ELF. Book of Fuxi would be a much more flexible choice. Rather, Bella caters more towards veterans who wish to fully optimize their performance with Lightning damage teams, especially Herrscher of Thunder who can fully unlock Bella's Team synergies.