Hey, Captains! Today we are going to be taking a look at the rework of stigmata Theresa - Gluttony whose changes will be available starting version 4.1. Theresa - Gluttony (T) has been available in the foundry for 30 SS Imaginons. In this guide, we will take a look at the reworked stigmata’s  functions, which valkyries will enjoy it the most, and its place in the meta. 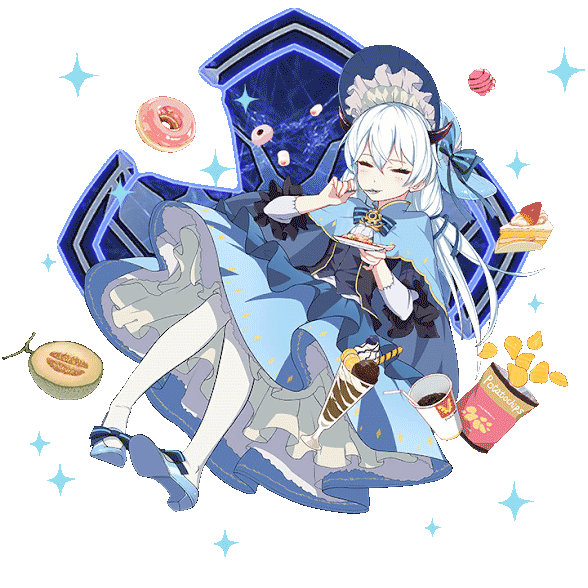 Old Effects:
Gluttony: Attacks on target has 10% chance of dropping candy. Eat the candy to gain 18% Total DMG Multiplier for 5s. Drop CD: 2s. Candy disappears after 8s if not picked up. 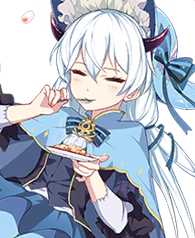 Let’s dissect the new effects. One of the first notifiable bonuses is the increased pick-up range passive effect for the entire team. This is already an amazing buff. Normally, players would be recommended to equip an emblem that increases pick-up range, such as the Cadet Captain Emblem or Golden HOMU King Emblem, so valkyries can pick up important items such as SP packs in extremely time-tight rotations and playstyles. Being able to pick up these distances without having to move out of your way to get the items and disturb your fighting can be the difference between a low and a high score. 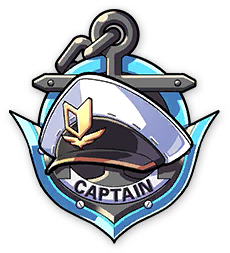 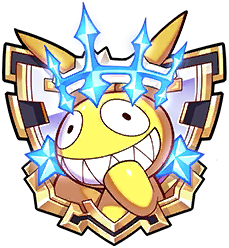 The aforementioned emblems provide the same or less pick-up range than the new Gluttony T’s range while also only providing either 1.0% bonus TDM or none depending on the emblem. Now, with this new pick-up range that Gluttony T provides, the range can be stacked with the emblems or Captains can choose to equip other emblems that provide more bonuses such as the Emblem of the Red Lotus Marquess. Already, the first effect is amazing! 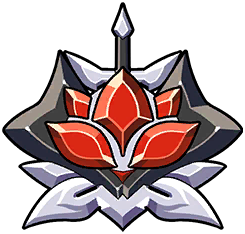 Now, for the actual candy mechanics: candy disappearance time, duration of bonuses, duration of bonus being refreshed upon picking another candy, and the bonus type being Total DMG Multiplier, are all still the same. That all stops there. Old Gluttony always provided a 10% chance of dropping a candy per every hit by the host and each candy provided 18% TDM. New Gluttony have candies drop on the first hit 100% of the time, and then every 12 hits later.

In addition the first candy only provides a 16% TDM boost but picking another candy changes the boost to 24%. At first glance, the new effect may seem unimpressive since it’s now only an initial 16% TDM bonus that can be picked up accidentally by a support valkyrie (more on this a bit later). This is actually false. The new Gluttony is much better. Because the first hit always spawns a candy and that it is guaranteed that every 12 stacks spawns another candy, you no longer have to worry about RNG-ing so many times for a better score. Don’t forget that every hit and second increases a charge count as well. The host does not even need to be out on the field to increase charges!

Also, since picking a second candy before the first one’s effects expire increases the bonus TDM from 16% to a whopping 24%, and that picking a candy buffs the entire team now instead of just the valkyrie who picked it up. Before, you had to make sure no support valkyries accidentally picked up the candy. Now, even if a support valkyrie picks it up, the buffs will apply to the entire team. And lastly, won’t be too hard to reach the 24% TDM buff due to the guaranteed drop on the first hit, and you can easily build up to 12 hits. With every 12 hits is a candy so you can easily maintain a 24% TDM buff depending on the host. 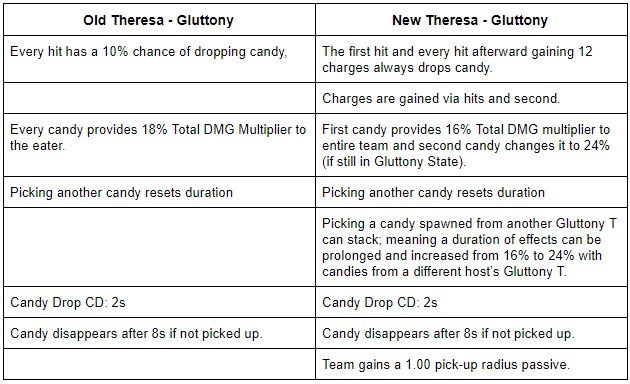 The valkyries who would use Gluttony T remain to be the support valkyries. Support valkyries who can perform non-melee hits very fast and/or apply hits off-field will be able to make use of this new Gluttony T the best. Drive Kometa can use lasers to apply many hits and even use Vikrant’s or Briareus-EX’s weapon skills to hit off-field. Both Celestial Hymn’s and Starlit Astrologo’s basic , combo, and ultimate attacks can all fulfill the aforementioned criterias easily as well. While there are more choices than just these three valkyries, other valkyries can also use Gluttony T’s candies to strengthen their teams much more as long as the player is creative enough.

Theresa - Gluttony (T) used to be a stigmata that provided an amazing 18% TDM but was very hard to use due to the low proc rate and small pickup radius. Now, with the new changes, Gluttony T is much better and efficient. Dripping candies will now drop at a guaranteed rate and will be less stressful to use. Gluttony T can find more playtime as opposed to other support stigmatas such as Ogier T and Tesla Band T. To top it off, the f2p-accessible Gluttony T gives an amazing pick-up radius passive to the entire team! F2P players can safely invest into Gluttony T without worry about getting their hands on other gacha-only support T stigmatas.