Grips of TaiXuan is a 4* glove weapon rewarded from the Co-op Raid Matrix Space. It is the strongest of the Co-op Raid divine keys and is often used by beginners and veterans alike. In this guide, we will go over the function of the weapon, and which valkyries can make use of it. 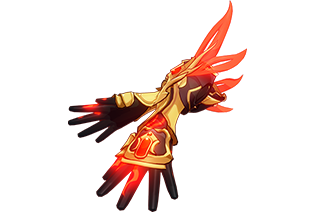 Yin Yang is a purely support ability. It will deal a total of 4,500 damage, which is negligible in the damage department. However, it provides a time slow to trigger QTE skills, it counts as hits for support stigmatas like (JST), Newton B, and Pool Party Mei, and can be used from a long range allowing some travel time to delay the hit.

Note: being used at long range is also a downside for triggering QTE, which has will not trigger on targets too far away.

Meanwhile, Unlimited is a great passive for damage dealers. Because of how frequently Fu Hua’s use their Combo attacks, users will consistently keep up 16% Total damage, while occasionally being able to have up to 32%.

Aside from all that, being a Divine Key weapon means it would unlock Divine Key Chamber bonuses. For Grips of TaiXuan, this includes up to 21 ATK, 85 HP, and 8% Ice dmg or 1.6 SP from Charged Attacks once every 4s.

Grips is a very common weapon seen on Phoenix (Phx) and Azure Empyrea (AE) supports. Phoenix’s signature weapon Cinder Hawk has no support capabilities to supplement Phx’s support potential, so Grips is often the preferred weapon of choice for Phx. As mentioned before, the additional source of time slow is very convenient to trigger QTEs from the likes of Herrscher of Reason (HoR), Scarlet Fusion (SF), Vermilion Knight (VK), Valkyrie Gloria (VG), and Wolf's Dawn (WD), to list some of the applicable elemental valkyries.

Night Squire, Hawk of the Fog, and Shadow Knight

This weapon is especially strong for newer players who have not fully geared their valkyries. Due to the flexibility of the weapon’s passive Unlimited, any damage dealer can make use of the extra Total damage. The passive is so good, it is only marginally worse than most valkyrie’s respective signature weapons. It is often not even worth it to prioritize upgrading weapons like Nuada’s Grief (before having access to the PRI-ARM Nuada’s Revenge) because Grips offers similar damage without Honkai Cube investments.

Here are some examples of Grips used as QTE triggering support for Memorial Arena boss Herrscher of the Void. The examples have the user trigger strong QTEs like Vermillion Knight’s high damage QTE and SF and HoR’s global time fracture QTEs on demand without relying on ultimate evasions. In the case of the HoR video, you will notice that Grips’ active could be used even while HoR’s deployment was on cooldown since you can delay SF’s QTE long enough to have it trigger HoR’s QTE in turn.

Grips of TaiXuan is a slightly different investment than other weapons. Being a Co-op Raid Divine Key weapon, you do not need to invest valuable crystals or Honkai Cubes, but instead, you invest with time. In general, Divine Keys should be invested in for the Divine Key Chamber bonuses. However, upgrading the weapons requires Co-op Raid materials, and lots of it. It will take 20,700 United Tokens, 1,270 Spirit Jades, 46 Phase Shifters, and 118 Souliums to fully upgrade this weapon. To put this into perspective, each Co-op Raid will net you about 65-100 Spirit Jades and 5-8 Souliums, depending on your level. It will take from 15-24 Co-op Raids to get enough resources. It will easily take close to 2 months worth of Co-op Raids to have this weapon from lv 30 to lv 50, and it will be 100% worth it. Doing so will let you give you a damage weapon that can be shared among multiple damage dealers in the early game and a support weapon once your damage dealers have better gear, making it the first priority among the Co-op Raid Divine Key weapons.