all you need to know about Honkai gacha

based on game version 4.0

This guide will help the captains to understand the difference between the diverse gacha supplies in Honkai Impact 3 and to know which supplies are worth to pull. Also, it will reveal some secrets behind supply drop rates. So, it is interesting for new and old players.

Based on the analysis of gacha supplies the captain should be able to choose the supply with highest chance of getting needed Valkyries and equipment. This guide will not analyze whether a specific banner is worth pulling because the meta shifts from time to time and the situation of every captains is different. 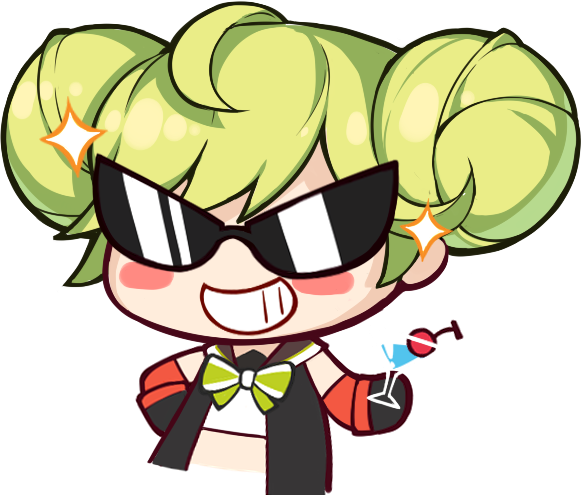 At first it is important to differentiate the supplies from the banners. Supplies can be found under Supply-tab. Different supplies have their own specific rules. The banners are the actual content in the supplies (Figure 1, A). The banners define the pool of equipment or Valkyries which of those can be get form the supplies.

Figure 1: Example of an Expansion Banner

Before going into details about different supplies in the game, it is good to know the basic rules about Honkai gacha first. In Honkai gacha crystals can be spent for one chance of pulling (single pull) or spend for 10 pulls performed at once (10x pulls) (Figure 1, C).

Also, there is at least one pity system (Figure 1, B) available in the most supplies. When no 4-star equipment or Valkyries are pulled in 9 tries, the tenth pull is guaranteed to provide a 4-star equipment or Valkyrie. The pity counter will be reset after a 4-star equipment or Valkyrie has been pulled. When a 10x pulls is performed and the 4-star pull is at 6th pull for example, the 4 surplus pulls are counted into the reset pity counter. That means only maximum of 6 additional pulls are required for the next guarantee 4-star pull. This is how the standard pity system in the game works (this name will be used in the whole guide). Some supplies have special pity counter at different values. The details of rules of different supplies can be checked directly in the details of the banner.

The game is filled with a lot of different kinds of supplies and banners. They are there to allure captains brainlessly spending the crystals and suck out the money of their credit card. Sorry, I mean to improve captain's gameplay and to increase captain's waifu count of course!  To prevent brainlessly spending the crystals into useless supplies it is important to know all kinds of supplies in the game first: 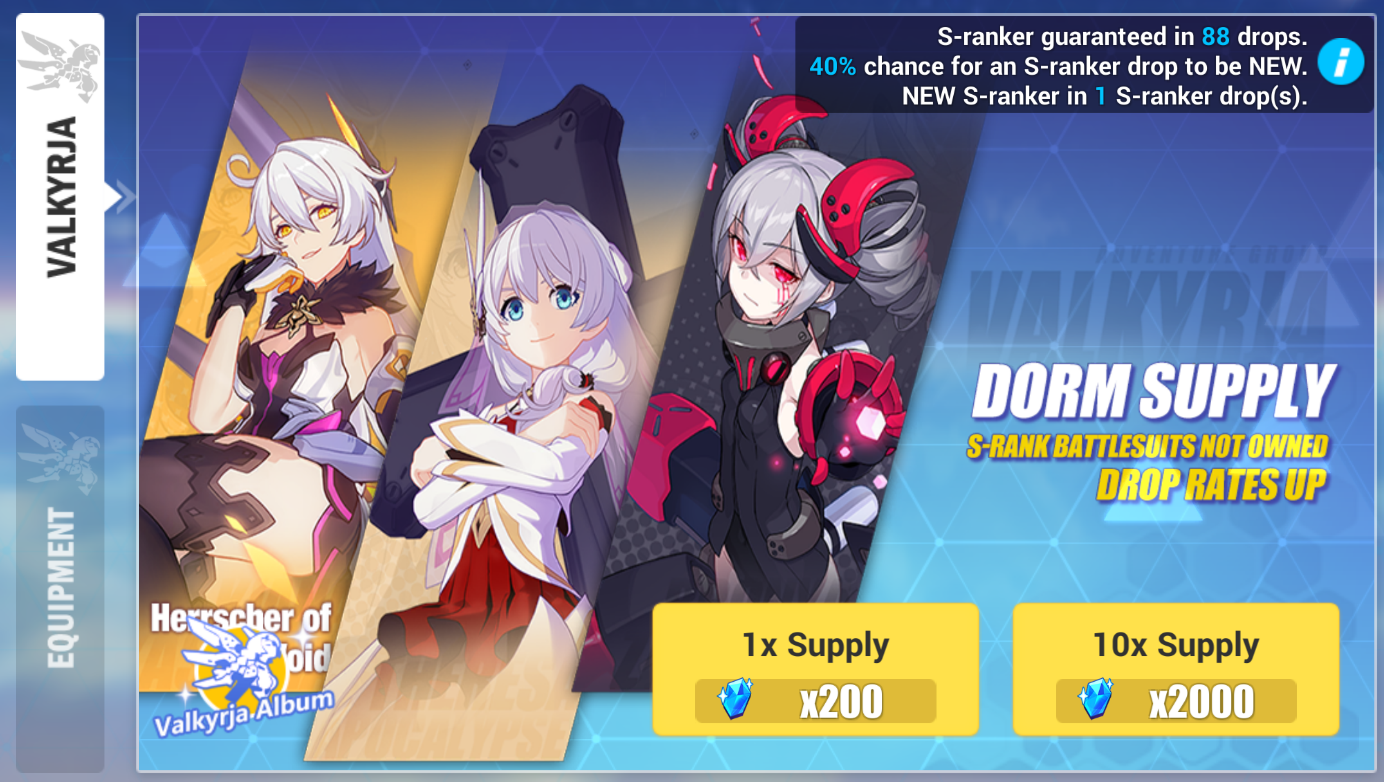 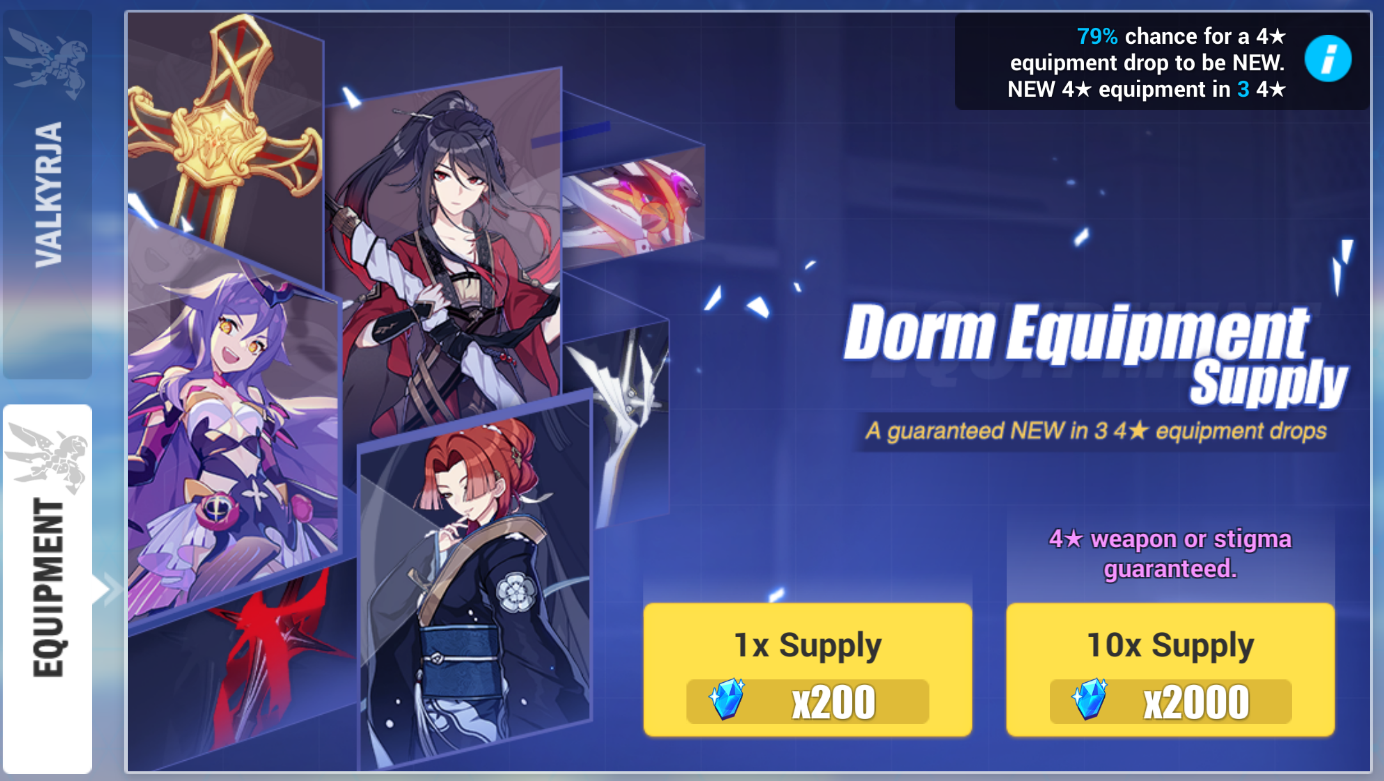 When a brand-new Valkyrie is introduced in the banner, it is available for 14-21 days. When the banner contains only already released Valkyries, the banner lasts for 7-14 days.

Elf Supply is the only way to unlock gacha Elves. This gacha cost only 150 crystals per pull and the pity counter for the UP elf is at 100 pulls. For every 10th pull the UP elf or its fragments will be dropped. There is also a global pity counter system for this supply (above v3.8).

There are and will be more variants of supplies. Mostly they relate to special events and holidays. The imagination of the developers to bait people for pulling gacha are unlimited. Some common special supplies will be introduced in this chapter.

The pity counter for the UP Valkyrie is at 100 pulls and does not carry over into the next ADV supply banner. A specialty in this supply is that only 50 pulls are needed to unlock an awakened S-rank Valkyrie just with additionally given fragments. ADV supply lasts normally one week.

After the knowing of the difference between diverse supplies, which one is worth pulling, then? There are single and 10x pulls options. Which is better? Those questions are answered in this chapter. This chapter contains mathematical equations, formulas and graphs which are probably not understandable for everyone. Those people can skip all the equations and read just the summary.

To answer this question some math is required. For supplies for which only the standard pity system applies, the expected value can be calculated as:

With all the formula together, the following equation for expected value with consideration of the standard pity system can be set up:

The solution for x is: 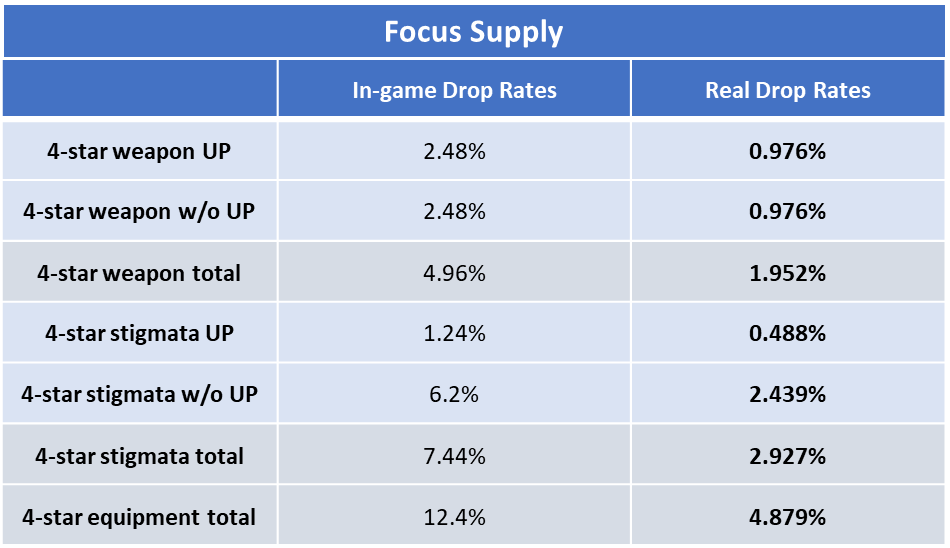 One can see that the real drop rates are much lower than the officially shown drop rates. This will have an impact on single pulls which is discussed in the next chapter.

Normally, with 10x pulls a lot of time can be saved during the pull of a banner. One should keep attention when pulling from a supply without global pity system. The surplus pulls won't carry over into the next banner and are wasted. It is better to perform single pulls at the end of a pull run or when only one piece of 4-star equipment or one copy of Valkyrie is needed to just get the guarantee pull and to prevent surplus. So, is there a difference in probability of getting a focus-equipment by performing single pull or 10x pulls?

When the guarantee pull is always gotten by performing single pull, then it is no drop rate difference between single and 10x pulls. The drop rate of a piece of equipment can be checked under banner's detail. The showed drop rates include the influence of the pity system as mentioned in chapter 4.1. Table 1 already showed that the drop rates without considering the standard pity system are a lot lower than official drop rates.

In short, there is no difference in probability when the performed single pulls have fulfilled the guarantee pity count. 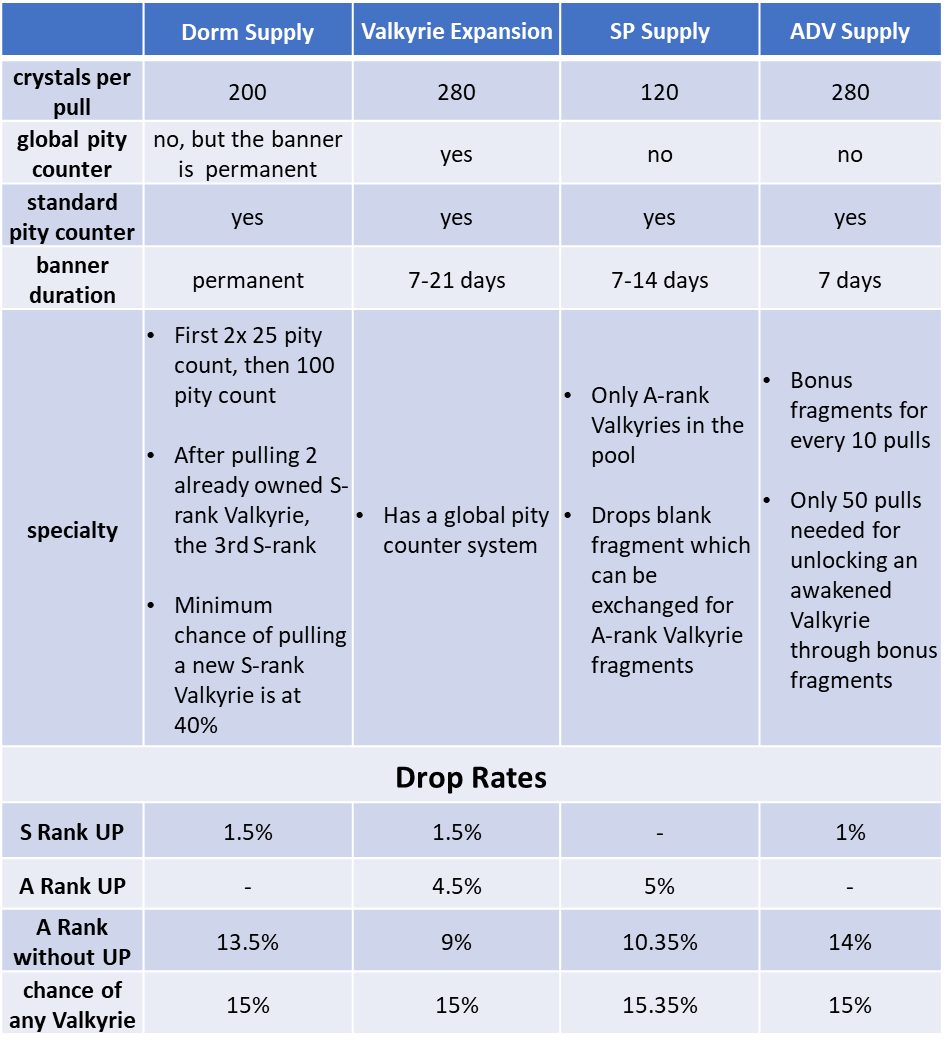 In general, Dorm supply is not recommended for spending crystals because there are many ways to obtain Dorm supply tickets to perform free pulls. By pulling from SP supply it is only recommended to pull until the SP Valkyrie is unlocked which needs 25 pulls at maximum. Normally there will be events available at the same time to obtain 100+ SP-Valkyrie fragments for free. 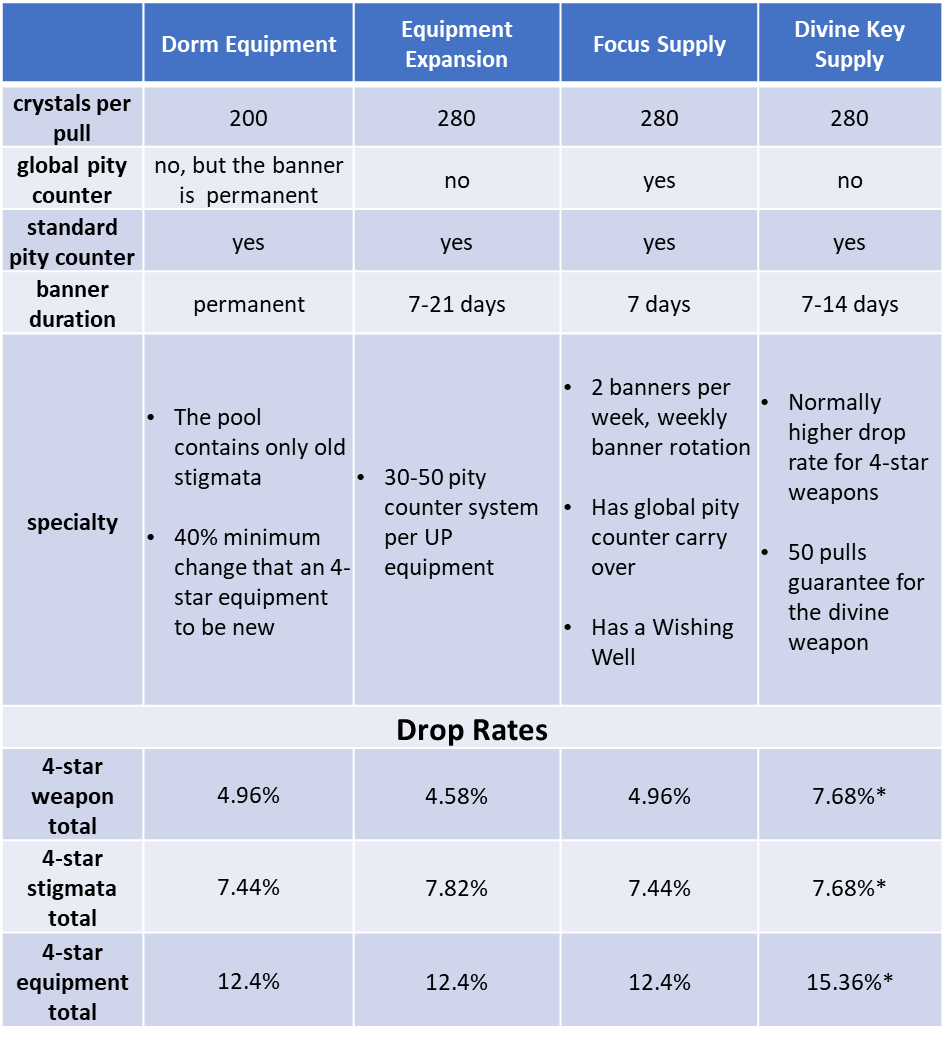 It is not recommended to pull from Dorm equipment. The pool of that supply contains so much stigmata and weapons that it is difficult to pull a specific weapon or stigmata set. Also, most of the equipment in the pool is obsolete. An investment in that pool rarely pays off. Divine key supply is worth to pull. It has the highest drop rate of 4-star equipment.

So, which one needs lower pull count for the whole S-rank signature set? This is the topic in this chapter. First the drop rate of both supplies will be separated in detail (Table 4). 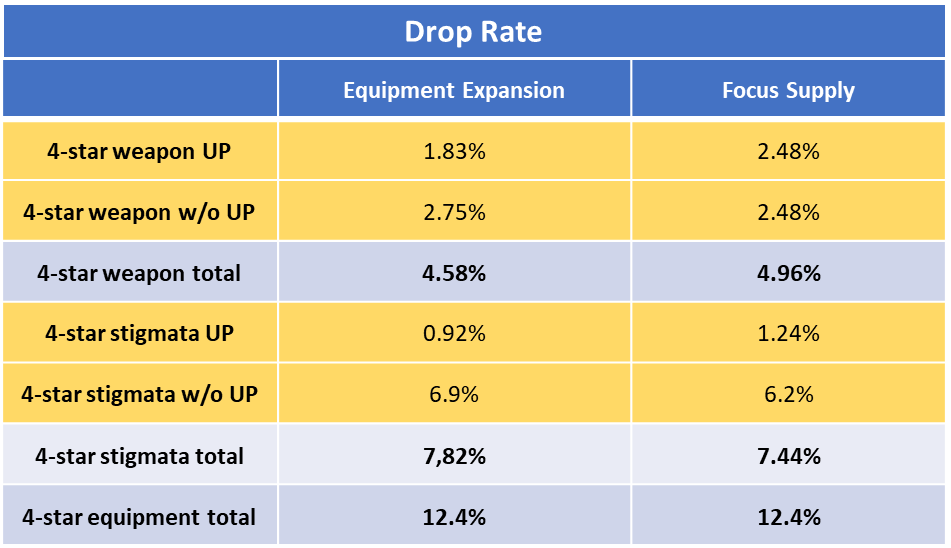 It is clear to see that Focus supply has higher drop rates in UP equipment than Equipment Expansion, but it can't be concluded yet, that Focus supply is better for pulling the whole UP set because the influence of the pity counter system of equipment supply and the Wishing Well of the Focus supply are not considered.

A Chinese Uploader 鱼仙 (UID: 34075114) on bilibili has done a simulation of 108 trillion pulls each for Focus and Expansion supplies. The data is shown as cumulative distribution function (CDF) in the following graph (Figure 8): 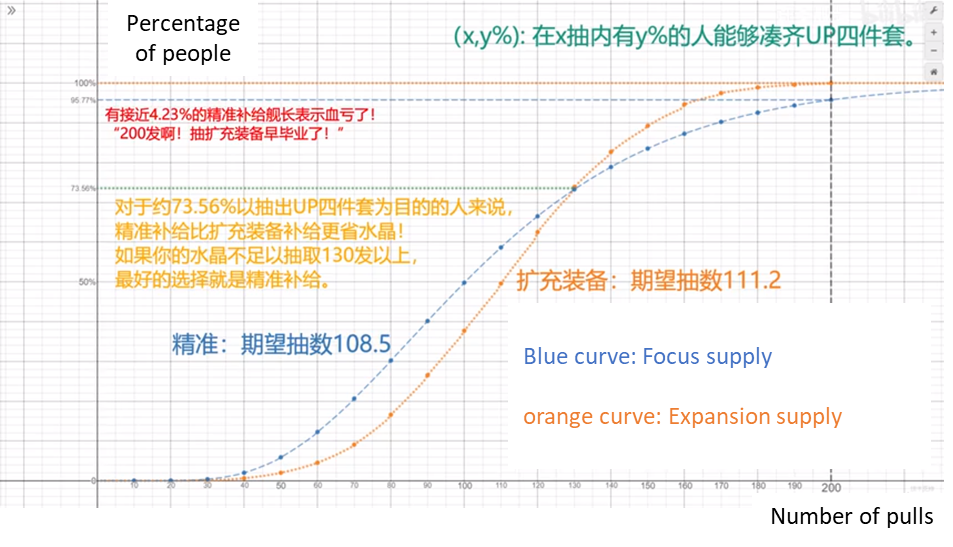 The median, 50% of the people, needs 100 or lower pulls from pulling Focus supply to complete a set and from Expansion supply 110 or lower pulls. Those values are close to each other, but there is a difference in the course of those curves.

Both graphs cross at 130 pulls. That means 73.56% of people have finished the whole signature set by pulling under 130 times. Before 130 pulls more people, who have pulled from the Focus supply, have finished the set than those who have pulled from Expansion supply, but there are 4.23% of people pulling from the Focus supply who can't finish the set after 200 pulls. By 200 pulls the Expansion supply will hit its unique pity system all 4 times and finish the set automatically.

Elves in the game are nice to have, but not indispensable. It has standard pity system and the global pity system (above 3.8). The impact of the elf is not higher than completing a signature set of a strong Valkyrie. When the focus of the captain is on the meta and still lacking meta relevant Valkyries and equipment, the crystals are mostly better invested in the Valkyrie and Equipment supplies first.

In the Valkyrie Supplies the Valkyrie Expansion is the main way to get new S-rank Valkyries. Even when not pulling the S-rank Valkyrie the already spend pulls are lowering the global pity system for the next banner. ADV supply is only good for ranking up already owned Valkyries into SS-rank. Because of lacking the global pity system, it is only worth pulling when the 50 (unlocks awakened Valkyries) or 100 pity count can be hit. SP supply is only worth to pull to unlock the SP Valkyrie.

Dorm supplies are not worth to spend crystals on. Instead the free tickets should be used for that. Elf supplies should be avoided when the captain with meta focus is still lacking strong Valkyries and equipment. The impact of those on the gameplay is stronger than the influence through the elf.

This guide covers most important information about the Honkai gacha. Hopefully it can help the captain's decision when pulling gacha. I wish all captains good luck in pulling! If you have any questions and suggestions, you can contact me on Discord (ID: Raz0r#8620). 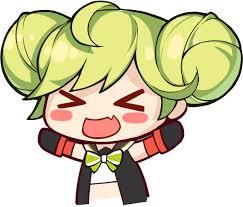