20% Crit Rate is nice for physical dps, but it is not worth using alone over TDM or Physical DMG stigmata. Instead, Dirac T is best paired with Dirac M for the set effect.

Dirac M is one of the best stigmata in the game. It provides up to 65.5% TDM for Burst Mode battlesuits.

There are three parts of Dirac M:

Image shows icon for Dirac M TDM increase over 10s. As you can see, both Night Squire (burst mode) and Hawk of the Fog (not burst mode) can activate this particular component of Dirac M.

[1] Unrestricted 20% Physical DMG is nice on physical dmg dealers.
[2] Impressive SP recovery that will help you get ultimate faster.
[3] Recover up to 13.5 SP over 10s duration. This is almost as much SP recovery from Schrodinger Band.
[4] Can be used on its own or with Dirac M for set effect. 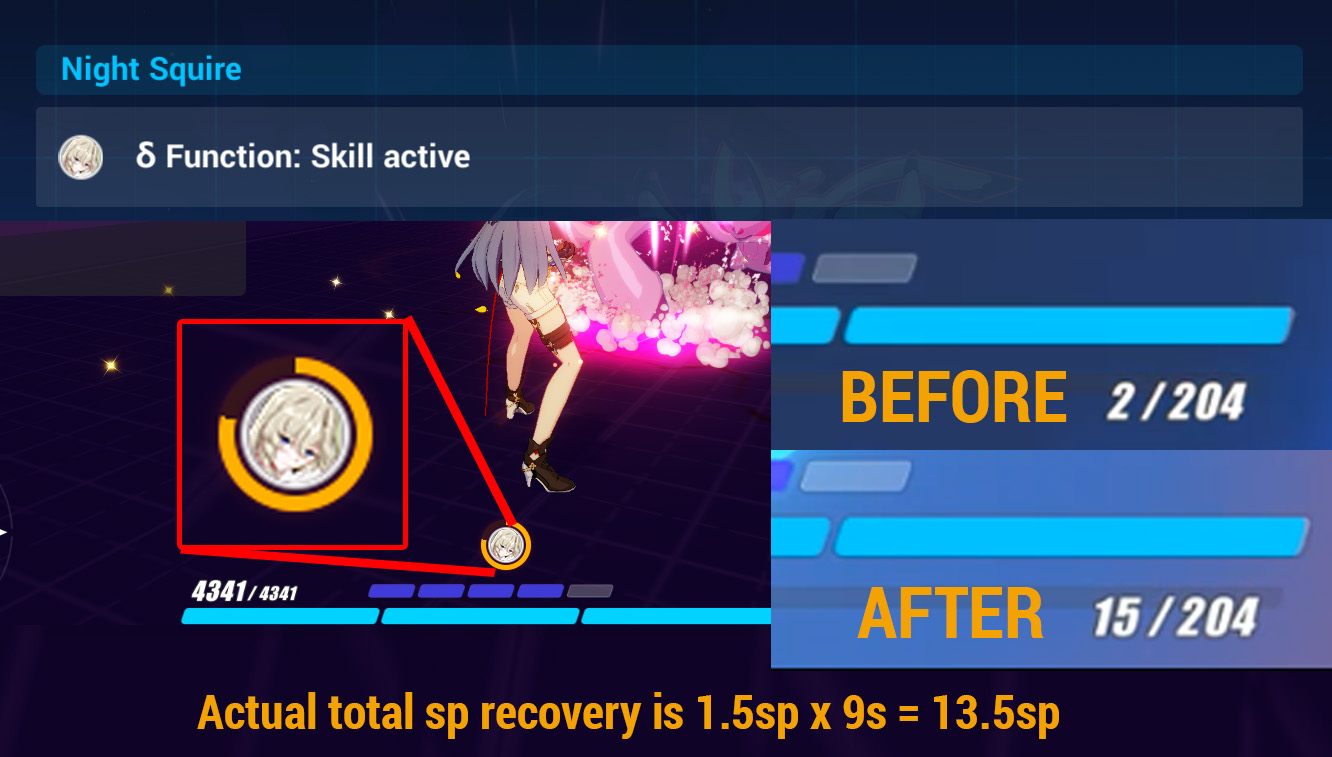 Image shows sp recovery icon for Dirac B, and 13.5 sp increase with Dirac B.

[1] Resets and extends duration of individual piece effect to 14s, which means the powerful Dirac M effect will now last longer. Perfect for valkyries with long burst duration, such as Swallowtail Phantasm.

[2] Provides 35% Physical DMG. Depending on which combination you use, you will get crit rate (TM) or more physical dmg and sp recovery (MB). Both are good bonuses for physical dmg dealers.

[1] 3-pc set effect extends the stigmata buffs even longer, up to 18s long. This isn't really needed as only SP and BK Burst Modes last this long, and 14s duration extension is already long enough for SP.

[2] In other words, you use Dirac full set for the strong single piece and 2-pc effects. Just consider the 3-pc effect as a bonus.

[3] Impair can be useful if you don't have other reliable impair source such as Celestial Hymn or Briareus EX, or after support impair expires.

NOTE: Some valkyries have non-burst mode attacks during Burst Mode, so they can't fully enjoy Dirac M bonus. Perhaps we'll discuss this in another guide.

Since there's a lot of capable users, let's see its endgame applications:

SHOULD YOU PULL DIRAC
Overall, Dirac is a strong stigmata set for battlesuits with Burst Mode. However, currently Dirac is only obtainable from gacha. So you have to ask yourself if it's worth your hard-earned crystal.

ASK YOURSELF THESE QUESTIONS

If most of your answers are YES, then you may consider pulling Dirac from supply.

CONCLUSION
Overall, Dirac is a very powerful stigmata set for battlesuits with Burst Mode. Dirac M is the most important piece while Dirac B can be used for SP recovery.
It is recommended to pull Dirac from gacha if you plan to get max potential on Night Squire, Swallowtail Phantasm, and to an extension, make your Burst Mode valkyries much stronger.

Visit Official Honkai Discord fur further discussion or feedback. Credits to the youtube users for gameplay, and Kirito for some of the chibi avatars.