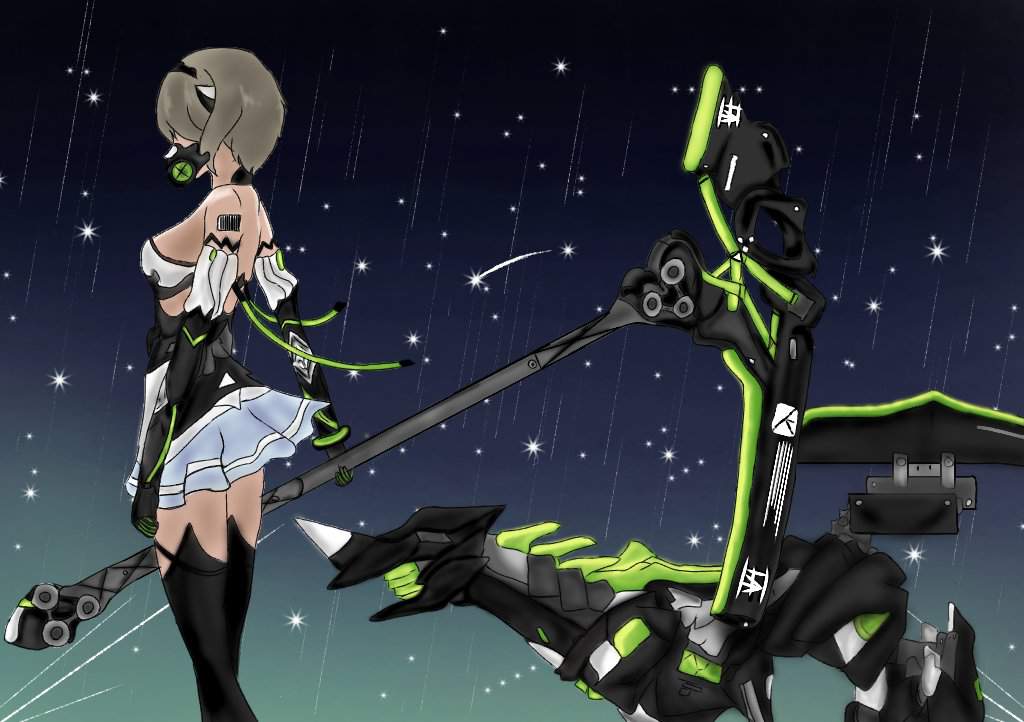 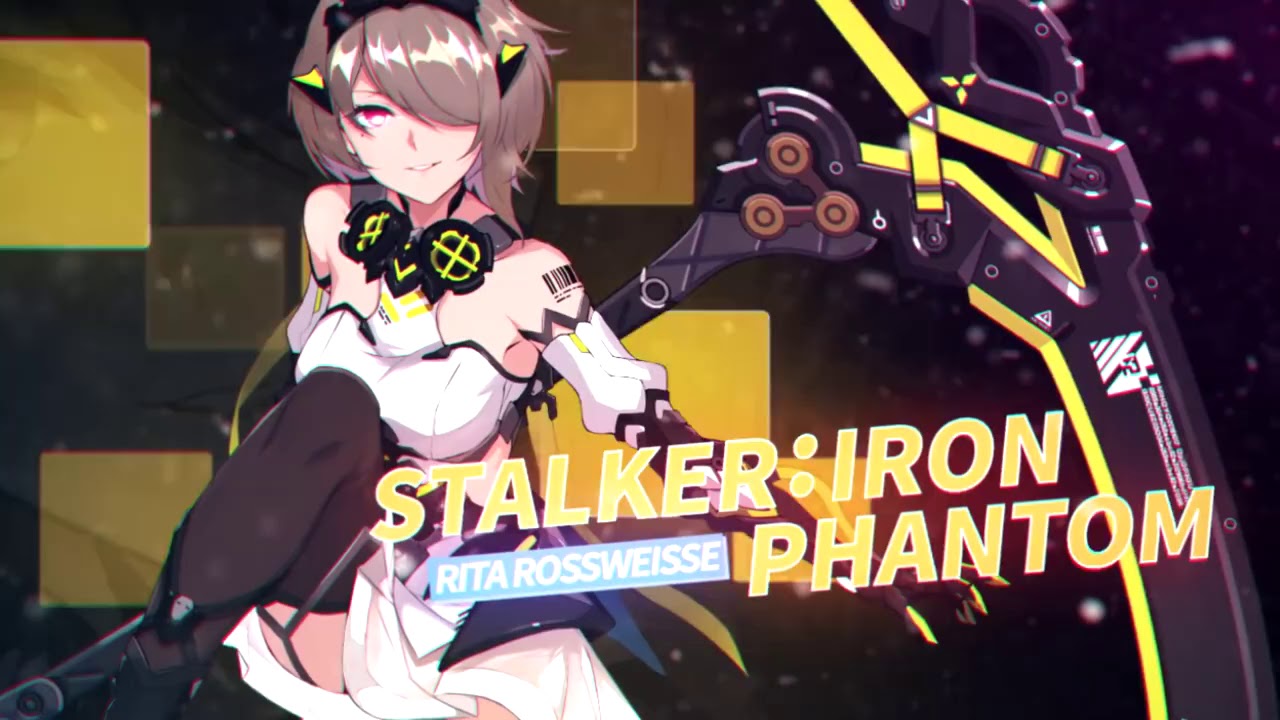 Phantom Iron Rita (we will call her PI) is a high burst, melee, lightning damage, mecha, A-Rank valkyrie. PI relies heavily on building up SP to activate her ultimate and summon her pet dog Stalker Carbon. She also gains massive damage boost while in her overcharge mode. Stalker Carbon also sets an AoE (area of effect) buff/debuff zone that will both increase damage and damage taken for enemies and allies. We will dive deeper into the specifics of her mechanics in a little bit; overall, PI is great at buffing herself to deal large bursts of lightning damage, while also having solid support potential with her dog.

Being an A-Rank valkyrie, PI's fragments will be farmable from the story's hard and supreme mode. Her farm spots will be available starting from chapter 3 at 3-7 (H), with additional spots unlocked at 4-5 (S), and in chapter 9 EX1. Also, PI fragments are given out for free as supreme challenge completion rewards for the two chapter 9 EX storylines, with a total of 12 fragments. In addition, taking part in her Scythe Angel event will grant a total of 21 fragments. There is also an Arc Stalker mission list that will reward to you another 10 fragments for the 10 missions completed, with the possibility for +20 more fragments if you upgrade the rewards with 330 B-Chips.

In short, you can receive a lot of free fragments if you participate in her introductory events, but if that is not enough, PI is also featured in the current expansion supply with a 4.5% drop rate and duplicate character cards will be converted to 18 fragments. Remember, since PI is a regular non-awaken valkyrie, this means you need 30 fragments to unlock, another 50 to upgrade to S-rank, 100 to upgrade to SS-rank, and 200 to upgrade to SSS-rank, a grand total of 380 fragments to have a SSS-rank Phantom Iron.

Radiation (CD 45s) -- Slows, reduces attack, and reduces interruption resistance by 30% to enemies in an AoE for 10 seconds.

PI Rita's leader skill is quite good if you are expecting heavy elemental damage or running a team of Mecha damage dealers. Please note that basic attack will not include burst attacks. 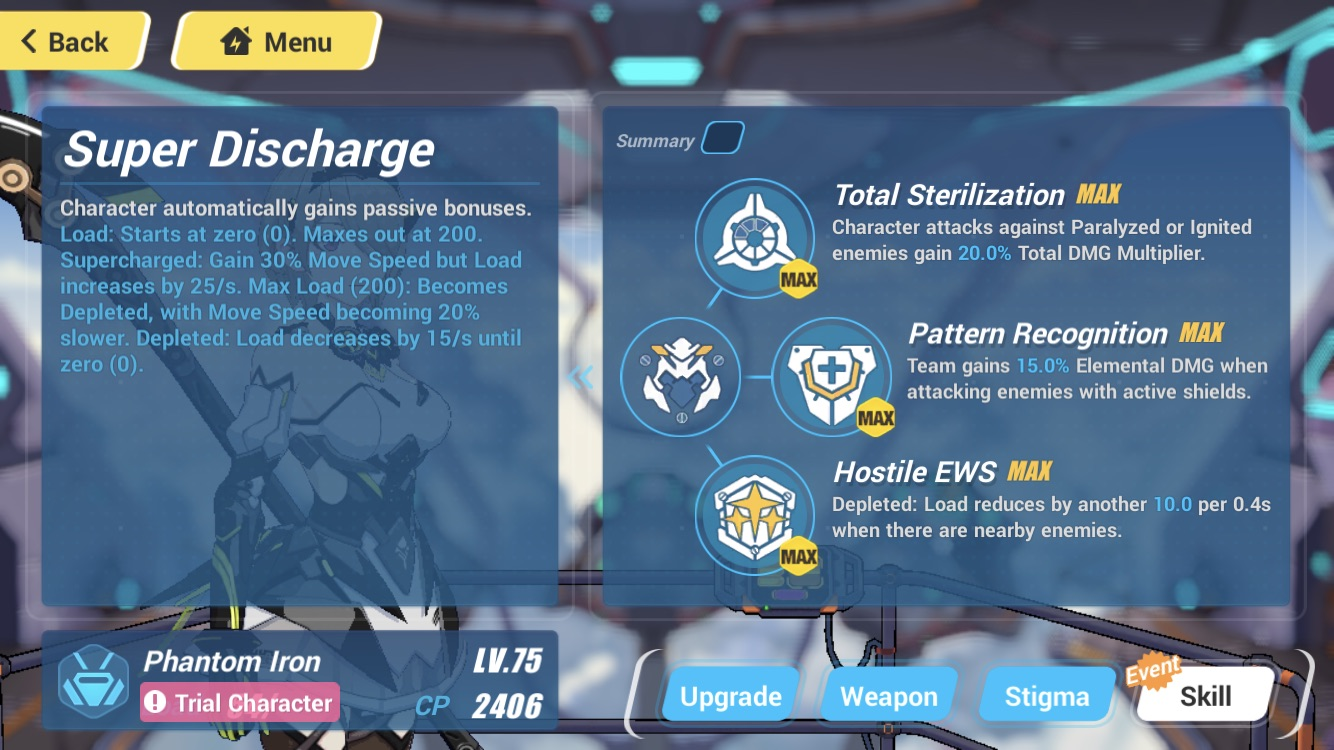 Phantom Iron's bread and butter is her Supercharged bar. The green bar has a maximum of 200 charge and it starts at 0. Supercharged is activated by using PI's charge attack. After entering supercharged mode, PI will gain 30% movement speed, 30% lightning damage, convert all her attacks from physical to lightning damage, gain ignore interrupt for basic attacks which gain another 60% lightning damage based on ATK, and take 30% less physical and elemental damage. That is a lot of buffs, however, the drawback is: supercharged bar gains 25 charge per second. With a maximum of 200, supercharged mode will normally end in 8 seconds. There are methods of prolonging the charge; killing enemies will reduce supercharge by 119 and evasion skill will decrease the charge by 150 (30 when evasion skill is on cooldown).

After supercharge has reached 200, the green bar will turn orange and you will enter Depleted mode which will reduce your charge by 15 per second until it returns to 0, allowing you to enter supercharged mode again. You can still reduce your charge by 150 (or 30) by ultimate evasion but you will no longer reduce charge by killing enemies. Depleted mode will also reduce your movement speed by 20%. Being adjacent to enemies will increase charge decrease rate by another 25 per second. Supercharged and Depleted load will still increase and decrease while PI is not deployed.

This is very good and an important passive to have if you are keen on using PI as a damage dealer; her evasion also is a reliable source of paralysis. But most bosses are resistant to paralysis.

Hostile EWS -- Depleted: Load reduced by 10 per 0.4s when there are nearby enemies.

Ultimate Evasion will reduce load while increasing movement speed by 40%.

Ultimate Evasion Skill will damage enemies in a small AoE by lightning damage and paralyze. 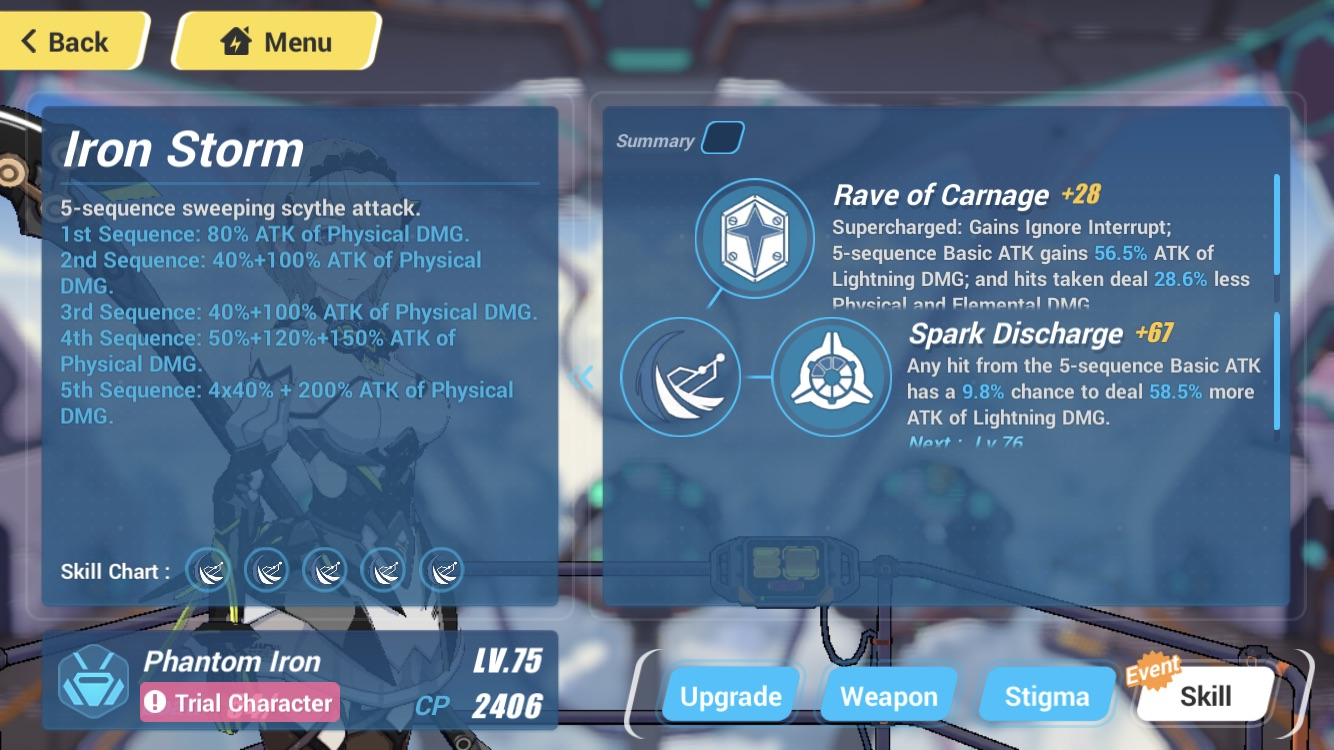 A 5-sequence scythe attack. It should be noted that the 4th attack can float enemies, nice for setting up QTEs or immobilizing enemies.

Super Important Skill! Must have for damage dealing PI.

Spark Discharge -- Any hit of basic attacks has 10% chance to deal 60% lightning damage.

Great for extending Supercharged mode but useless against bosses. 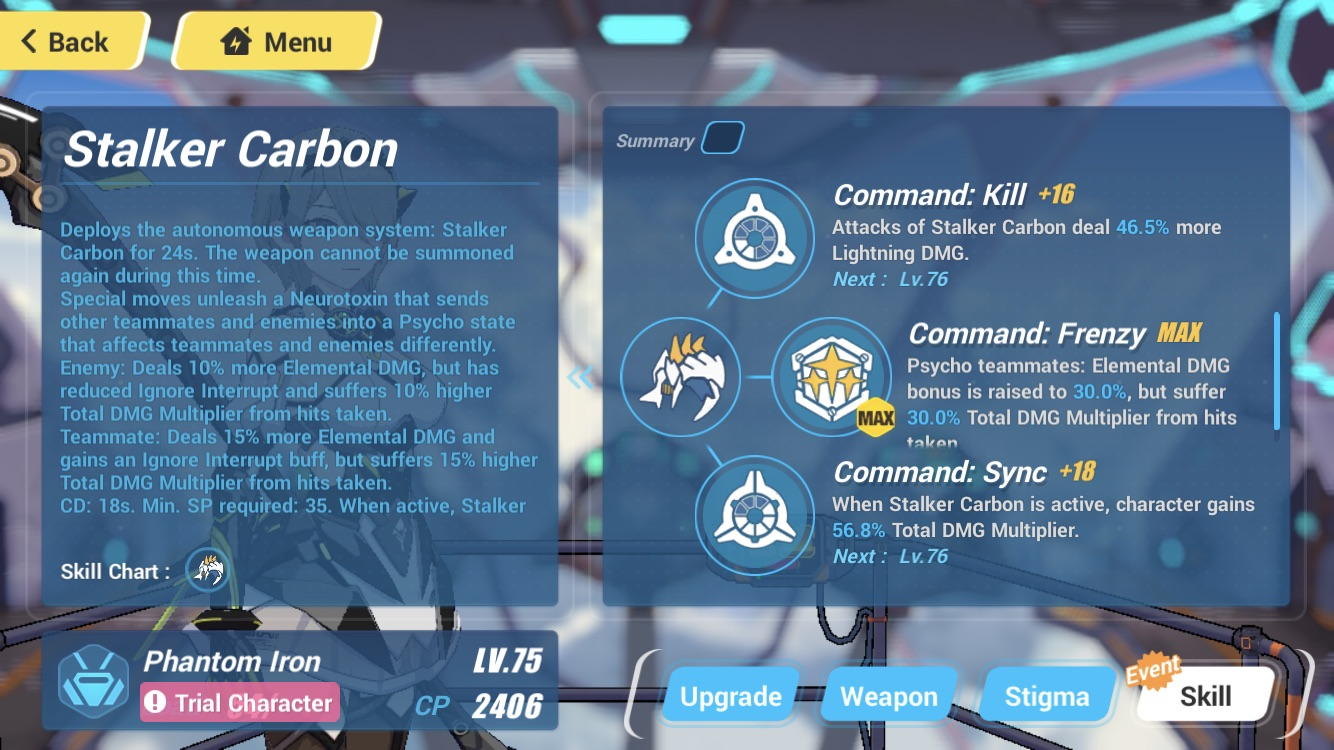 Requires 35SP to activate. Summons Stalker Carbon while draining SP increasingly from 1 to 5 SP per second. Stalker Carbon's maximum duration is 24 seconds. PI's SP regen is halved while her dog is out. If PI runs out of SP, dog will leave after 3 seconds. Stalker Carbon's first attack will cause an AoE field that affects both teammates (NOT PI herself) and enemies. Enemies will gain 10% more Elemental Damage and also 10% increase to Total damage taken. Allies will gain 15% Elemental damage and Ignore Interrupt but also take 15% more total damage. The dog remains on the field  and drain PI's SP while PI is not deployed.

The two skills above are both very good support skills. The dog will remain on the field and deal lightning damage and boost the damage of allies while PI is undeployed. If we look back to the passive skills, there was another rank S skill that increase team's Elemental Damage to shielded targets. Rank S is a very important rank for support skills.

This means PI gains a huge power spike with her dog out, making it crucial for dps PI to deal damage within that window.

SS Rank -- Increases damage by 20% against paralyzed and ignited targets and reduces evasion skill cd. PI's evasion skill does not trigger global time fracture and 11 seconds is still too long to trigger it twice in one Supercharge. Also most bosses are immune/resistant to paralysis making PI's SS rank skills somewhat underwhelming.

SSS Rank -- Adds another 60% lightning damage while in Supercharge and ignores interrupt and reduces damage taken by 30%. Very important if you want to kill bosses in a single Supercharge and Ultimate.

Phantom Iron's signature weapon and it is for a reason. The active is insanely strong which will last for PI's ultimate's and Supercharge's duration which is when PI is strongest. The passive easily grants +25% damage with the occasional +35% after successful evasion skill. This weapon is a must have for anyone planning to use PI as a damage dealer.

This is Argent Knight: Artemis Rita's signature weapon but the passive is good on any Rita. The 20% total damage increase is almost as good as the 25% - 35% seen on PI's signature weapon. Also the active has a super low SP cost of 4 SP, which is good because PI's ultimate quite literally drains her SP.

Both gives an active that grants a HP scaling shield that gives 10% Total damage when the shield is up. Duration is 10 seconds. Onyx Iron farther gives 1.2% Total damage for each 10% HP user has (maximum 12%).

Highest attack scythe that you will get for free. Worth using if you have nothing else.

Caravaggio M -- Gives 25% Lightning damage increase and another 10% Elemental damage when summoned unit is out.

Otto B -- Gives 55% Lightning damage when summoned unit is out.

Overall this set gives 25% Total damage and 120% Elemental damage. That is a combined 175% increase.

Any Stigmatas that boost Lightning, Elemental, or Total damage can be a decent substitute. If you have PI's signature weapon: Genome Reaper, movement speed stigmatas are useable as well since they translate to damage increase from the weapon's passive.

When it comes to content that PI excels at, it is memorial arena. PI will struggle quite hard against high temperature abyss and dirac sea. PI is amazing at killing things with in a short window of time when both her Supercharge mode and dog is active. In abyss and dirac sea where there are multiple waves of enemies who have high hp and elemental resistance, PI will have a hard time surviving. Also, as an elemental support, PI will be subpar compared to Wolf's Dawn's (WD) 30% Elemental damage boost with her shield, especially in a prolonged fight when you cannot keep PI's ultimate active. Not to mention the 30% extra damage taken debuff won't earn you any friends in abyss where you have to be aware of multiple enemies attacking you.

For Memorial Arena, PI can succeed against the same bosses that Judah teams are good against. The only catch is PI's typing, which means you would want to avoid using PI against psychic type bosses.

This set up is identical to the most common Judah team. We have Lightning Empress (LE) as lead, which will set up PI's SP for summoning dog as well as Divine Prayer's (DP) SP for her ultimate. Our goal is to get DP to 75 SP as soon and as efficiently as possible. Our win condition is to be able to trigger DP's ultimate and inflict Thunder Kikaku's 60% conductive debuff, switch to LE and trigger LE's conductive as well and have PI kill the boss before they run out.

This is the Judah team with Phoenix (Ph) support except with PI instead of Judah. You will notice most PI teams using PI as the main dps is simply Judah teams without Judah. This team should start with Ph setting up Firebrand, then switch to LE for conductive, and finish off the boss with PI.

This time we will have PI in a supporting role. The goal of this team is to set up with PI by going into Overcharge and sending out her dog. LE will tag in to apply conductive and Raikiri, with Judah finishing off the boss.

Phantom Iron is in a good place to attract a wide range of players. For the newer players, PI grants a high increase in elemental damage, all of which is unlocked at just S-rank. Elemental damage reigns supreme in the early to mid portions of the game, when elemental damage resistance is quite low. It is also a good and easy substitute to WD, another common elemental support, who has her support skilled locked behind the hefty SS-rank wall.

For the older players, PI carries a very very high damage ceiling. PI will need her signature weapon and stigmatas, as well as SSS-rank unlocked to achieve this, but having another option to help secure the top scoreboard spots can make the investments worth it.

If you want an easily accessable elemental support that turns into a late game powerhouse, Phantom Iron Rita is the valkyrie for you.