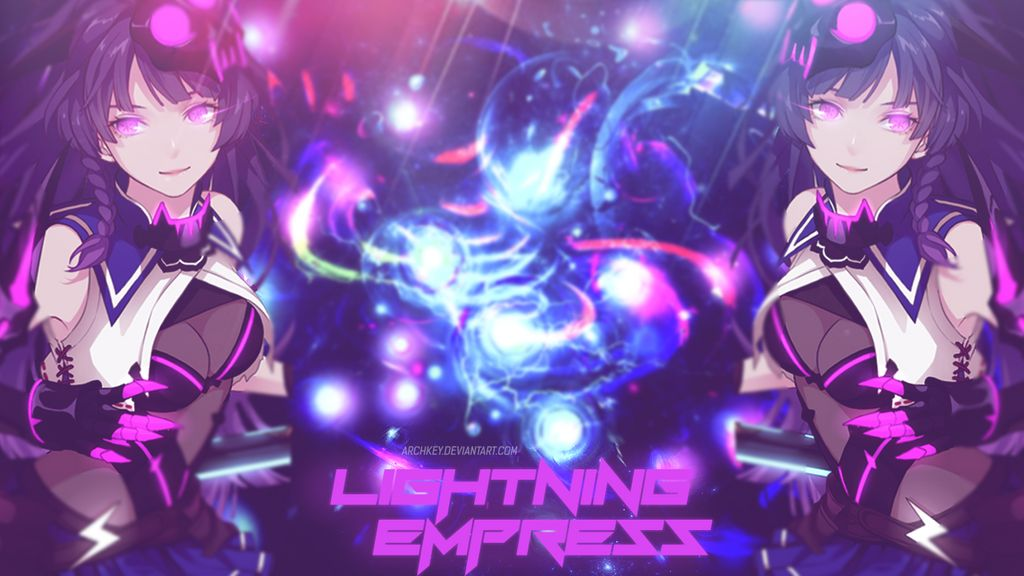 Lightning Empress (LE) is a base S-rank battlesuit for Mei. She is a PSY-type Lightning damage support Valkyrie. LE is a very old battlesuit and there are numerous methods of obtaining her. Like all S-ranked valkyries, she will occasionally be featured in Expansion supplies, although it is strongly advised not to obtain her by this option. Otherwise, she is also available in the Dorm supply, as well as Land of Wishes 1 (LoW1). It is often recommended, for those who have yet to obtain LE by other methods, to pick her in LoW1. Finally, LE is also available within the Memorial Arena's (MA) shop to be bought, limited to 6 fragments per week.

In return for your investment, LE is an extremely valuable Lightning damage support, with also a highly desired leader skill. Due to her support status, she is very equipment independent, but still improves greatly with the addition of her PRI-ARM MAG-Typhoon and other gears. Due to the sheer power she can bring to Lightning damage teams, LE is often one of the most highly prioritized base S-rank valkyries for players to unlock.

LE's leader skill is one of her strongest aspects. She provides her team with 50 (scaling to 70 at SSS rank) starting sp each! Also, she provides 20/23/26% Total damage to their attacks if the team has 3 PSY valkyries.

The main reason people are upgrading LE's rank is to strengthen her lead skill, which increases the teams initial sp by 10 per rank. This means she is perfectly fine at rank S.

Note: Total damage buff does not work on non-attack damage like Oath of Judah.

This is the reason why Lightning teams are consistently a top tier team composition. Conductive is a debuff, indicated by the purple circle underneath enemies, that causes them to take 70% bonus Lightning damage for 6s.

This can be applied by:

MAG-Typhoon enable's LE supporting capabilities extremely well and is a must have. For those who are lv81+ can simply switch in on LE and hit her weapon active once then immediately switch out. Those without the PRI-ARM would need to rely a bit on chance to get conductive applied in a timely manner.

LE's ultimate and QTE are mostly irrelevant to LE's gameplay, but they look really nice. They both have very long cast animations, do no notable damage, and would likely just slow down your fight, so it is recommended to keep QTE switched off.

This is LE's main source of damage if you choose for her to go into the damage role. This has been a very outdated way to play LE. Her combo attack is very slow and clunky but with the right stigmatas, LE could get the job done. Her combo attack can be chained from ultimate evasion and MAG-Typhoon active. The reason she has damage potential is because of her passive Dragon's Aura, which gives her a huge 100% Total damage multiplier against frozen and slowed enemies, this paired with the Monet set, which applies slow, lets her capitalize on it. However, Hawk of the Fog (HF) is a simply far better damage option, especially when supported by LE.

LE's optimal gears are pretty standard, with MAG-Typhoon and Jin Shengtan (JST). However, she is very stigmata independent and can function without them. You can find more in-depth information about MAG-Typhoon Here.

MAG-Typhoon's weapon skill will perform a fast hit onto her enemies, applying a total of 95% additional Lightning damage. In addition, the quick hit will proc JST, which will give allies an additional 45% Elemental damage, 15% Ice damage, and cause enemies to take 10% more Elemental damage. Finally, Newton B will cause enemies to take 31% more Total damage. This will be the best set up for traditional Lightning teams.

For players above level 81, MAG-Typhoon will meet your needs in most cases. It is farmable via Bounty Mark, making it accessible to all players. However, there are certain niche situations for Raikiri and Pulse Katana Type-17. Raikiri is mainly used for Shadow Knight (SK) teams to proc more New Moon damage, to better burst down bosses. Pulse Katana Type-17 is usually used in non-Lightning teams, where LE is used for her initial sp leader skill. Pulse Katana Type-17's active allows LE to proc support stigmatas from range.

Once again, support LE is not stigmata dependent. Anything that would make sense for the team can work.

Despite being one of the oldest valkyrie battlesuits in the game, LE has had multiple effects on the meta, from being a damage dealer, then strictly being a support, before falling back into damage dealing role in patch 3.4. However, for most of this past year, LE has been played strictly as a support once more and that is currently the best way to play her. We will go over some teams that can utilize her support capabilities.

Ideally, you would like Psychic type valkyries for her leader skill but that is not mandatory. Rozaliya (MC) is on the list as the ideal psychic Blood Dance carrier. Divine Prayer (DP) is only viable if you have Thunder Kikaku or Jingwei's Wings. Valkyrie Pledge (VP) is also an option if you have the Caravaggio set, or possibly can act as a secondary damage dealer with Oath of Judah. Otherwise VP is nice if you simply have nothing else, since she can provide time fractures and have crosses to provide status effects like Ignite.

They Bring the Pain

Here are a few options for the damage dealers of a LE team along with some video examples of how the team is executed. Most will be lightning valkyries who can exploit her Conductive debuff. For weeks where lightning teams are not needed in MA, LE can lead other teams who can benefit from additional starting sp.

Lightning Empress is the backbone of any Lightning team. She is highly prioritized by captains for her ability to enable her team with her powerful leader skill and support capabilities. There will never be a week when she is not utilized in a Memorial Arena team, and for this reason, she should be one of the first S-rank valkyries captains work towards.