Welcome to Ai-chan's Arsenal! Today we will be featuring the new scythe released in the new version: [Skadi Ondurgud]. 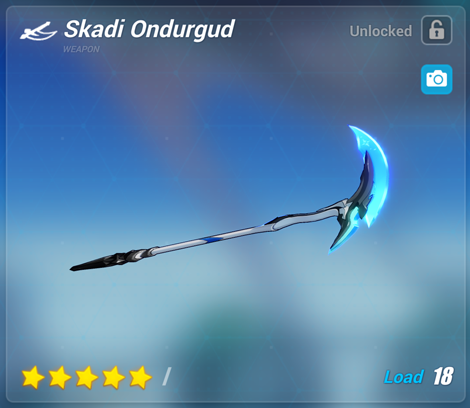 A unique Pantheon-series weapon forged using frost-blue Soulium unearthed from the Arctic Ruins. This piece of Soulium was insensitive to high temperature and could only be worked at super-conductive states under extremely low temperatures. The expedition that first acquired this Soulium described that it was like the Goddess of Frost building her own crystal palace. When the Soulium was removed, the crystal palace immediately collapsed into a pile of ice.

★ Data mentioned below is all Lv.50 data.

Deals 840% ATK of ice damage with only 4 SP and weakens enemies' ATKs, which takes account of both attack and defence.

This Passive Skill provides 2 benefits. One is that the wielder (all battlesuits of Rita) gains 20% Total DMG Multiplier unconditionally, which is a very useful DPS boost in most cases; the other is that [Argent Knight]'s hits on enemies with Hypothermia gain SP for her, which is essential to [Argent Knight]'s SP recovery, as she can apply Hypothermia to enemies repeatedly and quickly gain enough SP to unleash her powerful Ultimate.

In addition, as [Skadi Ondurgud]'s Passive Skill provides 20% Total DMG Multiplier unconditionally, it could also be a handy piece for Rita's other 2 battlesuits [Stalker: Phantom Iron] and [Umbral Rose] before they get their own recommended weapons.