[Argent Knight: Artemis] can summon a humanoid phantom known as [Crescent Harvest] in battle to fight with her, and apply "Hypothermia" to her enemies to imprison the evil in an eternal prison of ice.

The core combat mechanism of [Argent Knight: Artemis] is similar to that of [Sixth Serenade] and [Gyakushinn Miko], which is to apply special marks to enemies and then remove them to deal tons of DMG, and gain even higher DPS by unleashing Ultimate Skills to accelerate the process of stacking and removing special marks.

Press and hold the [ATK] button during the 5-sequence Basic ATK to unleash Charged attack.

Enter Burst mode to get super buffed and summon Crescent Harvest to join the fight.

Crescent Harvest can also be summoned by [Argent Knight]'s other skills and temporarily join the fight.

[Argent Knight: Artemis] summons [Crescent Harvest] (can also be summoned by teammates) and apply [Hypothermia] to enemies by releasing Basic ATKs or performing Ultimate Evasion, and unleashes Charged ATK on enemies with 2 stacks of [Hypothermia] to deal tons of DMG. With enough SP, [Argent Knight] unleashes her Ultimate and summons [Crescent Harvest] onto the battlefield to get super buffed and quickly apply multiple stacks of [Hypothermia] and [Ice Cell] that provide great DMG boosts to release massive DPS.

[Crescent Harvest] can deal tons of AOE damage. More importantly, it can apply stacks of [Hypothermia] to enemies to debuff them. 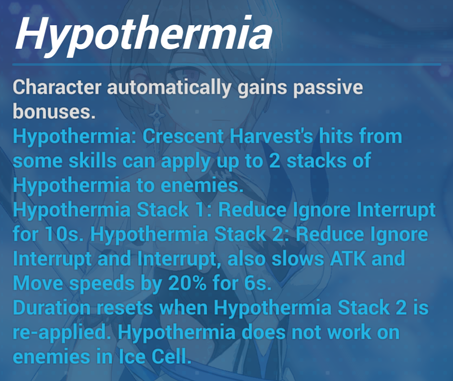 Unleash Charged ATK against enemies with 2 stacks of Hypothermia to lock them in [Ice Cell]. 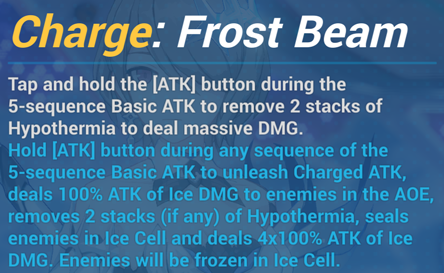 [Hypothermia] and [Ice Cell] can both provide DMG boosts, but the DMG boost provided by [Ice Cell] is higher.

Most skills and moves that could summon [Crescent Harvest] can apply [Hypothermia] to enemies; while basic attacks unleashed with the Ultimate activated can stack [Hypothermia] much faster and trigger [Ice Cell] more frequently.

Last but not least, the Ultimate can be turned off with 10 SP, dealing ice damage to enemies within a large AOE and locks them in [Ice Cell] for a longer period of time.

A handy piece in the early stage that is easy to get. Its active skill [Protective Field] generates a shield that absorbs DMG and heals the wielder, enhancing [Argent Knight]'s survivability. Also, as this skill boosts Total DMG, it is recommended to release it when the Ultimate has been activated.

[Robert Peary] set is perfect for [Argent Knight: Artemis] in all ways: it provides powerful Total DMG and Ice DMG buffs, heals HP, increases ATK Speed, and the 2-pc set bonus significantly enhances the battlesuit's survivability, to name a few. These many buffs and bonuses greatly boost [Argent Knight]'s DPS and keep her almost invulnerable even in tough battles.

[Edwin Hubble] set can be exchanged with Imaginon. This set provides decent Ice DMG boosts especially against frozen enemies. The stigmata skills [Subzero Beam] and [Observation] can make good use of the Slowing debuffs brought by [Hypothermia] to better manage and boost [Argent Knight]'s DPS.

Valkyrie Ranger can serve as a versatile support member for the team. For example, she can pull in enemies by performing Ultimate Evasion, boost the team's Elemental DMG and ice damage by equipping the stigmata [Jin Shengtan], or enhance the team's survivability by equipping support stigmata.

As [Argent Knight: Artemis] very much relies on SP to release DPS, she needs to stay on the battlefield. So it makes so much sense to arrange battlesuits with support buffs to be [Argent Knight]'s standby teammates. With [Wolf's Dawn]'s shield, [Stalker: Phantom Iron]'s skill [Pattern Recognition] and [Argent Knight]'s Leader Skill (activated when 3 team members' types are all different from one another), the team will have decent survivability and can gain great DMG boost.