Zither's Lament is a new cross weapon introduced in version 4.0. It is a 5* gacha exclusive cross, that will be Starlit Astrologos' (SA) signature weapon. In this guide, we will go over the function of the weapon, and whether it is a worthy investment. 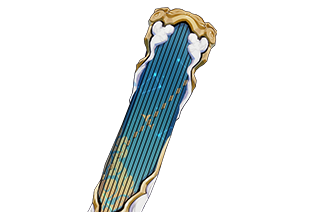 While equipped by SA, if the active is not on cooldown, it will be auto-casted when her Ultimate is unleashed through QTE.

In addition, Eastern Winds' synergy with SA means it can activate its weapon skill on demand, while the user is off field. This will give you more control over when to activate your support buffs.

Being another physical support cross, it is only natural to compare it with 11th Leitourgia. If it must be compared, 30% Physical damage seems even more desirable than the 20% Crit rate of 11th Leitourgia. In addition, the buff also lasts a longer duration, and is not limited by the AoE zone of the active. However, 11th Leitourgia's Celestial Hymn (CH) specific synergy skills will allow it to remain Best in Slot (BiS) for CH.

This weapon is simply built for SA. This patch's new valkyrie will likely shape up to be a meta defining support with its unique QTE mechanic and this cross is the best cross you can get for her, to capitalize on its unique feature.

As previously stated, 11th Leitourgia is still CH's best weapon. However, Zither's Lament will provide players who have yet to unlock 11th Leitourgia with a very strong alternative. The extremely large 30% Physical damage buff cannot be ignored.