※ Stats below are all Lv.65 figures. 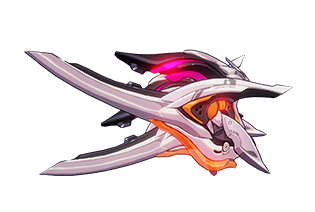 Implosion Core: (SP: 0) (CD: 20s) Summons an Implosion Core that deals 510% ATK of Physical damage in an AoE. While equipped by HoV, the skill gains a Heavy Attack tag, restores 60 Herrscher Charge and deals 40% more damage to shields. The Implosion Core will also generate a Space Core. Upon entering Herrscher Mode, an additional Implosion Core (no Space Core) will be summoned.

Subspace Echo: While equipped by HoV, she gains 25% damage against shields and reduce damage taken by 20%.

The skills of this pistol are pretty lackluster. The biggest benefit of the weapon is the increased ATK stats from being lv65 more than its active and passives.

Implosion Core will do slightly more damage than KotV's active, but with very similar effects of gaining 120 herrscher charge.

Void Sigil is basically the same as KotV's passive. The added 10% Physical damage is highly diluted and reliant on the 3s duration of HoV's evasion skill or other sources of time slow. Remember, this will not apply with her ultimate because her ultimate applies time slow after the ultimate is completed.

Subspace Echo is another negligible bonus as damage against shields is one of the lesser desired multipliers in the game; it's simply negated once the shield is broken.

However, when all is said and done, the increased ATK stat is pretty valuable for damage dealers. You will likely see an increase in damage when using this new PRI-ARM.

I have done some damage calculations comparing Domain of the Void next to Tranquil Arias and KotV. The results are shown below. The rotation was 3 sequences of basic attacks to gather Herrscher Charge, Celestial Hymn (CH) ulti and cross drop, and evade, snap, active, ulti and backline Starlit Astrologos (SA) QTE, ulti, and active during GK switch in against a Honkai Beast with 2200 DEF.

Keys of the Void

Example of HoV using Domain of the Void against Rita and Shadow Knight in Memorial Arena, scoring 31,360 and 31,253 respectively.

The user in the video also has SSS rank on CH and HoV so the score would likely be much lower with S rank CH and HoV.

As before, I have done some damage calculations comparing Domain of the Void next to Tranquil Arias. The results are shown below. The rotation was Drive Kometa (DK) block, tap, CH QTE, cross drop, Void Drifter (VD) QTE, active, and 2 combo attack sequence against a Zombie with 2200 DEF.

Domain of the Void will be competitively viable on two valkyries: Herrscher of the Void, and Void Drifter. However, HoV has been mostly pushed out of the meta, being passed over by other physical damage dealers like Swallowtail Phantasm (SP). With Domain of the Void, HoV can compete as a physical damage alternative for a couple of low-end Memorial Arena bosses. Domain of the Void is technically better than Tranquil Arias, but the difference is very marginal. This PRI-ARM is a very low priority investment. In terms of its place on the PRI-ARM ranking, I would put it barely above the likes of Star Destroyer 19C-X and Tranquil Rhapsody.