Aphrodite is the signature weapon for Umbral Rose(UR) introduced in v2.7. It is her best weapon, allowing her to reach peak performance in battle.

OVERVIEW
1 - Active skill deals AOE Physical DMG, has a low SP cost and low CD. If used properly, it can improve UR damage output every cycle.

2 - Gives 20% Physical DMG, which is good for UR. This makes it usable but not the best for other Physical Scythe DPS (Stygian Nymph(SN) and Swallowtail Phantasm(SP)).

3 - Even against her best matchups such as Arena Shadow Knight, UR is outperformed by a handful of valkyries, such as Stygian Nymph, Molotov Cherry and Void Drifter. Therefore, obtaining Aphrodite is not a top priority. 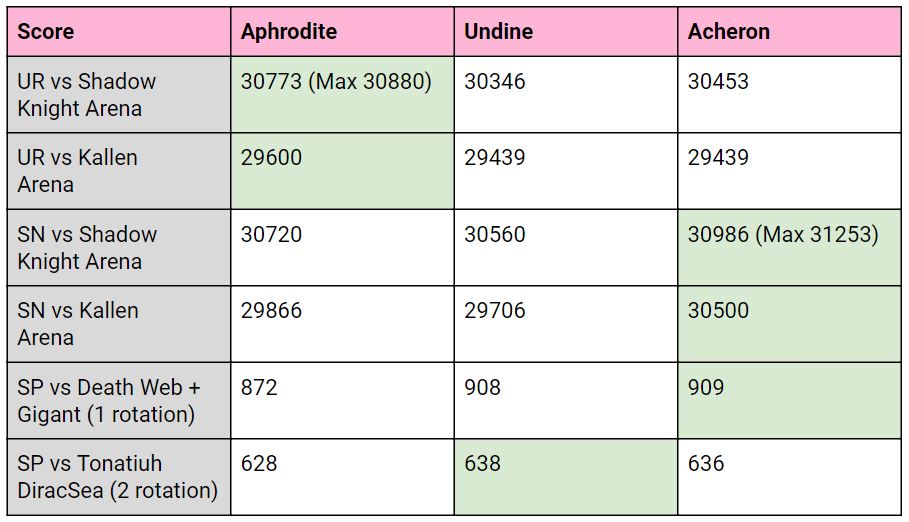 What about Onyx Iron, Senescence, Skadi Odungurd and Skadi of Thrymheim?
Without getting into details...

Aphrodite is the best weapon for Umbral Rose. The active can benefit from UR's skills, and if used correctly, can effectively improve UR damage output. UR is best used against MECH-type enemies such as Shadow Knight, so Aphrodite's bonus damage proc will always get 100% Crit Rate.

Stygian Nymph and Swallowtail Phantasm can benefit from 20% Physical DMG bonus, but overall performance is worse than their signature weapons.

SHOULD YOU GET APHRODITE?
Aphrodite is the best weapon for Umbral Rose, but UR herself is only good against a few Memorial Arena bosses. On top of that, she is outperformed by other valks such as Stygian Nymph, Molotov Cherry and Void Drifter.

The next issue is… how can you get Aphrodite.

Focused Supply - Aphrodite is usually paired with Wilde, a suboptimal stigmata set. Therefore, it's not worth it to get Aphrodite from gacha.

Those are the only methods of getting Aphrodite in the current version, and neither of those gets my recommendation. Perhaps if there were any other ways to get this weapon, such as from Exchange Shop or Bounty Pass, it would make the Umbral Rose + Aphrodite combo much more accessible for F2P players.

CONCLUSION
Aphrodite is the best weapon for Umbral Rose, and she is very dependent on Aphrodite to reach maximum potential. However, the biggest problems with Aphrodite are:

These two factors made Aphrodite an equipment not worth aiming for with crystals. But, if you happen to get it, your UR is gonna get pretty wild-e! Hehe~

If you wish to learn more about Umbral Rose's mechanics and playstyle, check out this Umbral Rose Strategy Guide by iH8Ecchi.

If you have any comment/suggestion, you can find me in Official Honkai Discord.