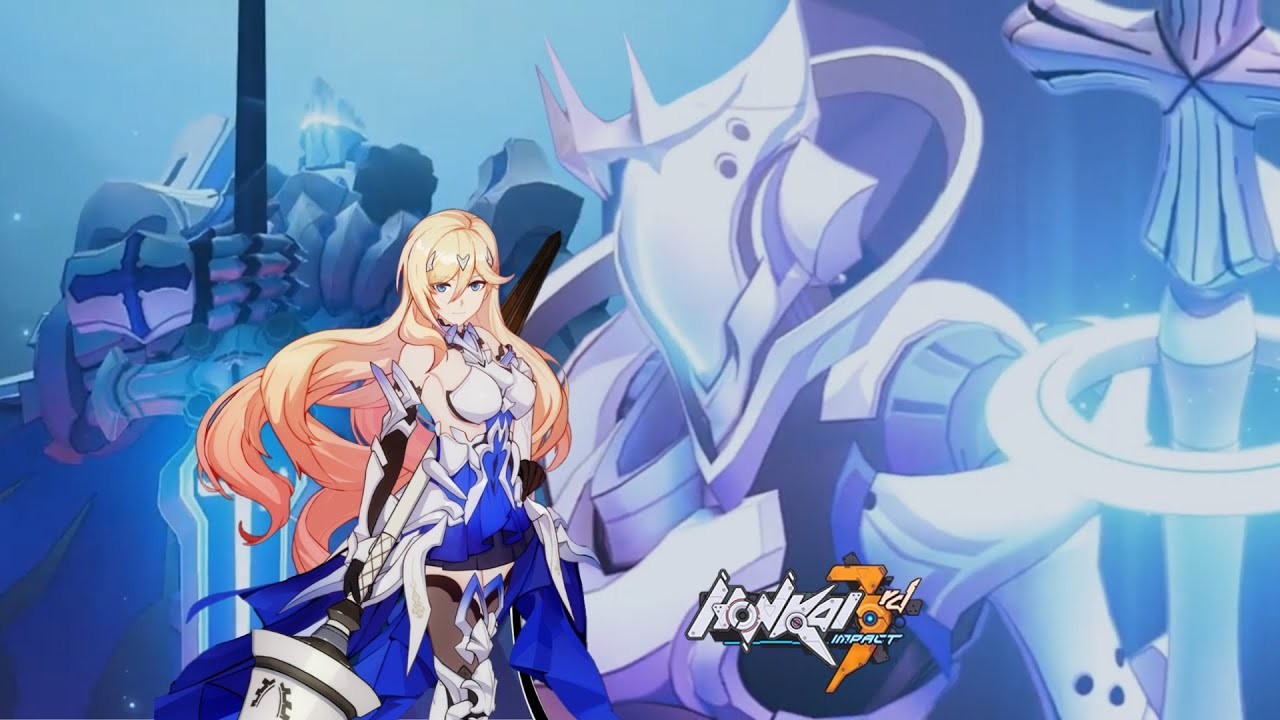 Bright Knight Excelsis (BKE) is a base S-rank battlesuit for Durandal. She is a Mecha Physical damage burst mode Valkyrie. BKE is the new battlesuit introduced with patch 3.9 and will be available from her expansion supply. In this guide, we will go over its skills and playstyle, as well as possible gear choices.

Initial opinions of the battlesuit

Right out of the gate, we are greeted with an amazing lead skill granting her team 20% bonus physical damage and crit damage. This is the strongest unconditional physical lead skill in the game allowing BKE teams to fill its support slots without any typing restrictions.

Durandal will gain stacks of Paragon each time she is hit, indicated by the small icon above her bars. Additional ways to gain stacks are performing a retaliation or QTE, both granting an additional 2 stacks. These stacks will grant BKE additional total damage and damage reduction. Paragon stacks can be stacked up to 10 times.

BKE's QTE is triggered by time slow. Performing her QTE will trigger a short time fracture and grant her two Paragon stacks. BKE will also be able to chain directly to her Javelin charged attack.

BKE has a 5 sequence basic attack pattern. The most important detail here is that the 4th multi-hit sequence grants bonus SP gain. Its importance will be more apparent once we go over her charged attack mechanics next. She should not be performing full 5 sequence attacks if it can be helped.

BKE's charged attacks will account for the bulk of her damage output. BKE can actually perform four distinct charged attacks depending on her ultimate evasion skill and burst mode.

BKE will feature a new evasion mechanic called Retaliation. It is very similar to Perfect Defense commonly used by Drive Kometa (DK), except it will have a duration limit of 2s. A successful retaliation will activate a time fracture, heal 10% Max HP, grant 50% Physical damage, 30% damage taken reduction, and allow BKE to chain into her charged attacks.

Evading will also grant time fracture and chain into charged attacks, but only while BKE's evasion skill is off cooldown and does not grant Retaliation's damage buff. There is no benefit to evading while her skill on cooldown and Retaliation is always prefered over evasion.

After Javelin is performed, tapping ATK will allow her to directly chain to the 4th sequence of her basic attack. This will allow you to go from 4th -> 5th -> Javelin -> 4th as shown, in quick succession. This is a very quick way to gain SP.

If BKE's ultimate evasion skill is off cooldown, retaliating or evading will allow you to trigger Javelin EX, which is a stronger version of Javelin. It will provide a gathering effect, as well as sporting more damage and SP gain than its basic counterpart. It can also chain to the 4th sequence and allow you to perform the Javelin loop as shown before.

Burst mode is what will enable BKE's damage output. It will cost 100 SP and last 23s long. It will also end burst mode immediately upon switching out. While in burst mode, her basic attacks will deal higher damage.

It will also allow you to enter Turbojet mode by evading forward, which is similar to Herrscher of Reason's (HoR) bike mode. It will reduce your turn rate and increase your speed. By attacking in this mode, you will deal a Turbojet Assault and chain directly into the 3rd sequence attack. This mode does not really serve much purpose and will not be used too often.

The main benefit of burst mode will be access to more powerful charged attacks. Next, we have Phantom Blade; it can only be triggered while in burst mode after retaliating when her ultimate evasion skill is on cooldown. Its main advantage is to refresh the Retaliation's 50% Physical damage buff and it's very good damage against enemies that have rapid predictable attacks. 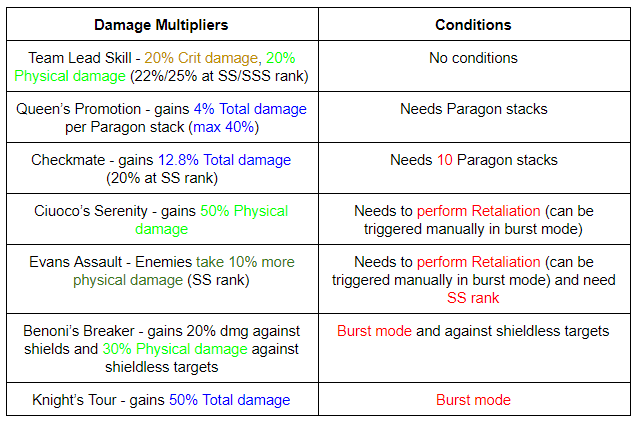 BKE is near full potential at her base S rank. The bonuses upgrading her is not worth the potential cost.

BKE's optimal gear is pretty standard. Her signature stigmatas and weapon will be very good at enabling her damage output. If you want even more burst damage, you can substitute Dante M with Dirac M. However, losing Dante's 3 set bonus will weaken BKE after the initial Impair wears off so I would recommend to just keep the full set.

Being that Lance is a new weapon class, there are simply not many options. The 4* Plasma Lance from the foundry will be your best option if Hler's Serenity eludes you.

There are quite a few options for BKE if you do not have Dante. BKE has natural synergy with both Dirac and Kafka stigmata sets. Being a burst mode valkyrie, and the ability to manually trigger Dirac B in burst mode, lets her really take advantage of Dirac 2/3-piece bonuses. Being heavily reliant on Charged attacks also allows her to trigger Kafka's 2-piece bonus as well. Within the f2p options, we have our generic physical damage stigmatas. BKE is extra good with Lier B because each retaliation heals 10% max hp and naturally pairs well with DK, making it really easy to stay at full health.

All four valkyries are quite standard physical damage supports. However, BKE has a very long burst mode duration, which often outlasts common support debuffs. This means it is very valuable to have ways to reapply debuffs off field. Abilities like Celestial Hymn's (CH) and Snowy Sniper's (SS) ultimates can reapply debuffs like Newton B. Weapon actives like Vikrant, Briareus EX (along with DK shield), Thunder Kikaku, and Jingwei's Wings can also achieve this effect. Also, longer lasting buffs like the Margraves' Warhaunt would also be helpful.

An easier way to play BKE would be to simply let BKE solo everything, with backline supports like DK and Divine Prayer (DP). Also note that DK shields do not prevent hits from generating Paragon stacks, making it very synergistic.

Here are some gameplay examples of BKE in action

I personally find Bright Knight Excelsis very similar to Shadow Knight (SK) in many ways. They both have high innate multipliers, mecha typing, great AoE potential, and long duration burst modes, which make it hard to support, but easier for a solo playstyle. However, BKE also has access to her Dante stigmata set which can provide a source for Impair, which will be invaluable in higher level content. I think BKE is strong enough to physical powerhouse valkyrie, who will be much more reliant on gear than on supports.