INTRODUCTION
Hey, captains. So you pulled the new Durandal battlesuit Bright Knight: Excelsis (BK) but not sure if you should get the new Dante set for her? Perhaps you're curious how well BK performs with Dirac or Kafka set? Well, you've come to the right place. In this guide, I'll provide a comparison of BK's damage output with various stigmata combinations. Shuppatsu~~~ 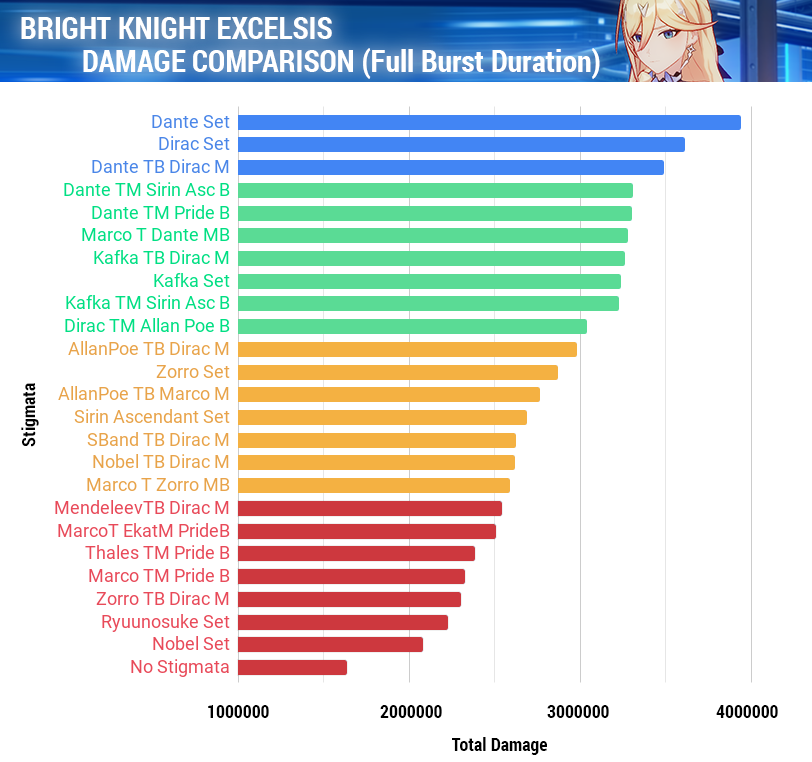 As you can see, Dante gives the highest damage output for BK. DIrac set is the second best, but there is a signifcant difference between Dante and the rest of them. Let's analyze what makes Dante so good, and then briefly discuss some of the other combinations.

Here's a gameplay of BK with Dante clearing Abyss without any support.

DIRAC SET
Dirac set is the second best set for BK due to its VERY HIGH TDM/Physical Bonus, and allows BK to apply 50% DEF Reduction impair with each attack. However, it lacks ATK Speed, Evasion CD Reduction, and its bonuses won't last for the entire Burst Mode.

OTHER COMBINATION
There's a big damage gap between Dante/Dirac to other stigmata combinations, mainly due to the lack of continuous impair. Don't worry! Just use what you have for now! Let's take a look at some of the combinations.

THE EXPERIMENT
In case you were wondering how I did my experiment... One of the new features in 3.9 Beta is the improved test stage with DPS counter, making it easy for me to record the damage!

Here's a video showing how the test is conducted, with a little explanation~

Dante is the best set for Bright Knight: Excelsis as it gives everything she needs. There might be a better stigmata combinations for a specific situation, but for most fights, Dante is your go-to set. If you want to get the most out of your BK, you definitely have to get Dante set.

If you have any feedback/question, you may find me at Honkai Discord or Youtube~

Finally, thanks to Ai-chan team for this opportunity to participate in the beta.