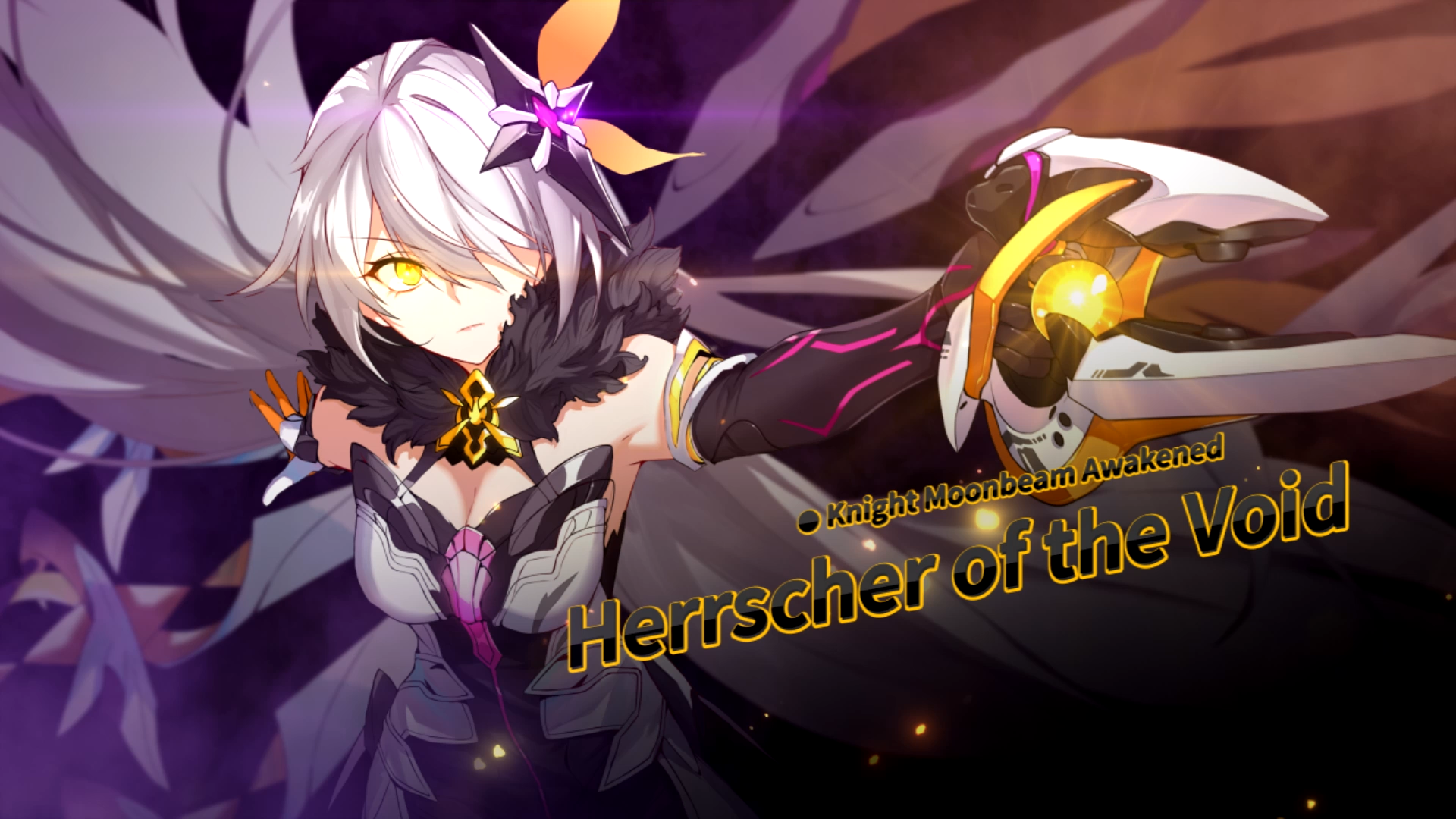 Bow before me, and I'll keep you alive till Judgment Day

Herrscher of the Void is the soul-awakened BIO-type battlesuit of [Knight Moonbeam] with ranged Physical ATK.

Be aware that performing evasion during 5-Sequence runs will reset the sequence count. For example, if the Herrscher evades right after the 4th sequence, her next Basic Attack will start from the 1st again.

With at least 240 Herrscher Charge, tap and hold [ATK] and the Herrscher will snap her fingers, dealing up to 1000% ATK of AOE Physical DMG and activating Herrscher Form.

Herrscher Form is the superbuffed form of the Herrscher of the Void that continuously consumes Herrscher Charge.

Basic Attack will turn into 3-sequence runs. The 3rd sequence Space Core summon deals higher Explosive DMG across a larger AOE and pulls in enemies nearby.

Performing Ultimate Evasion will create a Time Slow area centered around the enemy, stopping enemies' action within the area for 3s, irrespective of enemies' Time Resist.

Herrscher of the Void can directly make the 3rd sequence of the 5-Sequence run (Basic ATK) upon performing Ultimate Evasion.

Be aware that [Herrscher of the Void]'s evasion skills (including Ultimate Evasion and normal evasion) are blink evasions with no model collisions, allowing easier escapes when surrounded by enemies!

Triggered upon Time Slow or shield break. Herrscher of the Void enters the battlefield and deals up to 1000% ATK of AOE Physical DMG.

Enemies within the large area centered around Herrscher of the Void (including the ones behind her) will be Time Locked for 3s when Ultimate Skill ends.

The Ultimate Skill also applies a global slowing effect (similar to the Ultimate Skill of Valkyrie Ranger) where all enemies' action will be slowed down and the stage timer will be suspended. But this effect will not work for QTEs triggered by Time Slow. 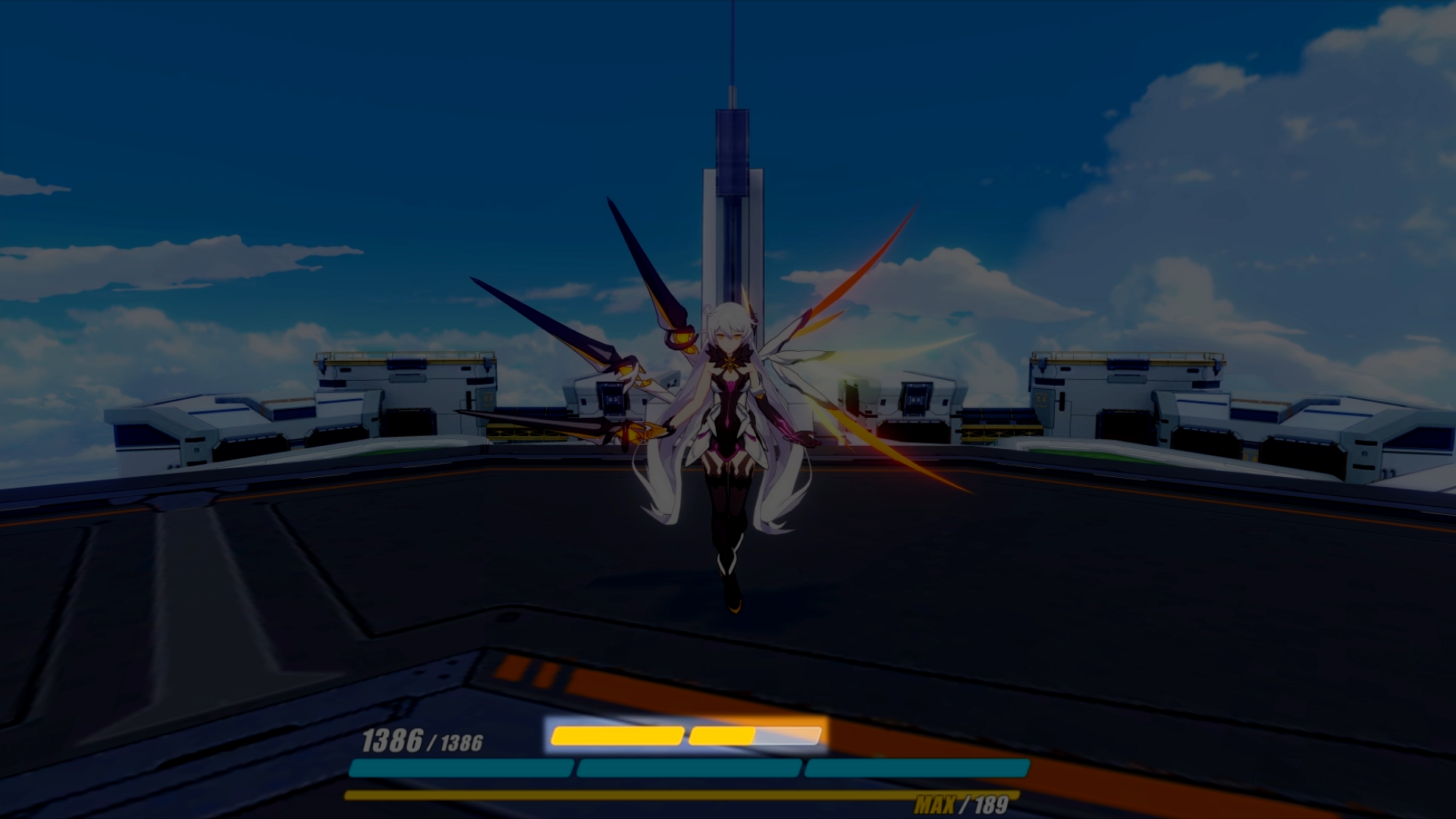 1) hitting enemies with the 3rd and 5th sequences of the 5-Sequence run (gain 60 per sequence);
2) performing Ultimate Evasion (gain 60);
3) the skill Dimension Warp (gain 60 upon performing QTE);
4) using the weapon skill of [Keys of the Void] (gain 120);
5) using the skill Void Empowerment (unlocked when Herrscher of the Void reaches SS-rank; gain up to 360 of Herrscher Charge upon unleashing Ultimate Skill).

*Equipment data mentioned below is all Max Level data.

Weapon: [Keys of the Void]

[Keys of the Void] has good Crit stats.

This is the perfect weapon for Herrscher of the Void.

Reduce the CD of Ultimate Evasion by 20%, which enables Herrscher of the Void to make better use of evasion skills.

Though the 30% Critical DMG buff is not as high as that of Ekaterina Set and [Michelangelo (B)], it's UNCONDITIONAL!

The Space Shield provided by this stigma is only vulnerable to Elemental DMG, which helps to maintain the shield and activate the core stigma Skill.

Every entity summoned provides 12% Total DMG Multiplier (lasts 10s) for the battlesuit equipped with this 2-pc. Stacks up to 3 times. Newly generated stack will replace the current oldest stack.

Herrscher of the Void is one of the few battlesuits that can continuously summon entities. She can quickly activate and maintain the 36% Total DMG Multiplier provided by the [Celine: Ascendant] 2-pc Set in 2 Basic ATK runs.

The 3-pc stigmata skill provides up to 80% Critical DMG buff, which is next only to the 120% buff provided by Ekaterina Set, and is always active. Moreover, it gives a 15% Crit Rate buff under Herrscher Form.

As Herrscher of the Void has skills with massive Total DMG Multiplier buffs, the fact that [Celine: Ascendant] set provides excellent Physical DMG and Critical DMG buffs makes the most of the DMG equation.

You think you've learned everything about me? You fools. Offer me your life and I'll let you have a sip of the Honkai, human.