INTRODUCTION
Fu Hua Musician is a Foundry stigmata set introduced in v3.0. Each piece costs 120 SS Imaginons and 50 Honkai Pieces. Musician is one of the best free support sets, providing unrestricted Total DMG Multiplier (TDM) and Fire DMG to the team. Bottom piece is also a decent stigmata for Fire DPS. Let's take a detailed look at the set.

200% ATK of Fire DMG every 3s is a small amount of damage. As you can see in the table below, even the 3⭐ stigmata Wang Zhaojun T gives overall more damage output than Musician T. Basically, it's not worth using Top piece alone on any valkyrie.

10% Fire DMG bonus isn't very high, but it is an unrestricted buff - making it a viable free Fire support gear. Commonly paired with other Musician pieces for 2set effect.

Musician B is good for Fire DPS. Firebrand in the skill description refers to Phoenix ability. Most Fire valks can ignite on their own, so you are pretty much able to get both Fire and TDM bonus during most of the fight.

The other free stigmata Fuxi B, provides stronger Fire DMG and gives more damage output. So, if you need a Fire DPS stigmata, go forge Fuxi B first. Eventually, if you play long enough, you'll forge Musician B too (mainly for 2set support). 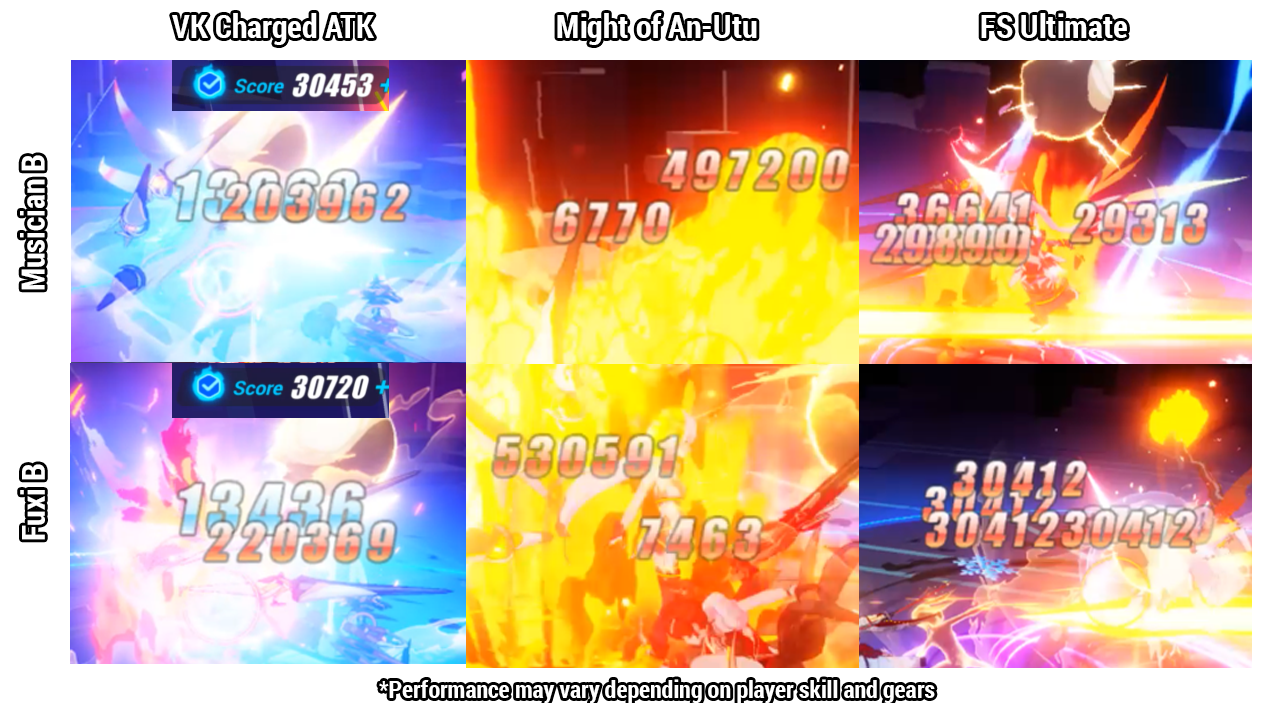 Musician 2set provides unrestricted TDM support. You can pair any two Musician pieces and leave the remaining slot according to your needs - Physical, Elemental or even more TDM support. If Musician M is used, you will provide the team with 10% TDM and 10% Fire DMG.  The first 10% TDM bonus lasts forever as long as the host exits just once. 5% additional TDM for the host is mostly useful for Phoenix, which will improve her Firebrand mark damage while off-field.

Musician TB - Use this if you don't need Fire DMG from Mid piece. You can put Mei: Beach Party M, Gustav M, etc. Depends on what support that you need.

Based on the table above, Musician provides some DMG boost for Physical teams. Of course, Musician can't beat gacha supports, but they're good enough to help you clear Red Lotus Abyss or Arena bosses, provided your DPS is well equipped.

Based on the table above, Musician provides some DMG boost for Elemental teams, but less impactful compared to the free Summer Days set. Keep in mind Summer Days has its AOE requirement while Musician is unrestricted.

Musician is mostly used as a support set, so more damage isn't necessary. You want to provide more team buff than having more support damage.

CONCLUSION
Currently, Musician is one of the best Foundry support sets. Its bonuses are unrestricted and easy to activate. Of course, it is obviously not on par with gacha support gears (such as Gustav, Margrave, or Jin Shengtan).

If you have a well-geared DPS, Musician does its job well, and helps you clear Abyss and Arena. Fu Hua Musician is recommended for captains who already have a good DPS but lack support gear.