INTRODUCTION
Durandal has arrived! ? Valkyrie Gloria (VG) is Durandal's first A-rank battlesuit in the game. She uses a new Lance weapon, and is the first QUA Fire DPS in the game. She relies on her Ultimate and Charged ATK - Decisive Blow to deal huge AOE damage. Here is an overview of VG: 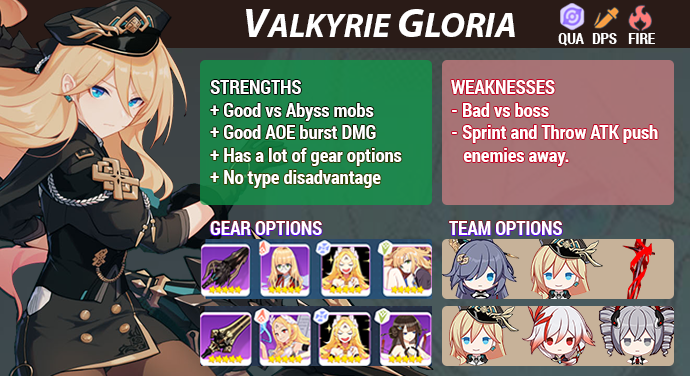 VG might seem complicated at first, but with practice, you will find that she is fairly easy to play. This guide aims to help players understand her skills and able to use her effectively. If you have read her skills and just want to know how to play her, then you may skip to the [How to Play] section.

SPECIAL SKILLS
As always, before we begin, let's get to know some of VG's special skills.
1) RESOLVE METER  - Two gauges, 240 units each (480 total)

3) COUNTERSTRIKE THROW (CT)  - A variation of Throw that can only be activated against certain enemy attacks.

ULTIMATE  - Once you have 100 SP, you can use Ultimate, which generates Aura Ignis, which unlocks her strongest Charged ATK - DECISIVE BLOW. Sounds confusing? Ok, let me explain it in order.

In AURA IGNIS, VG gets buffed??

HOW TO PLAY VG
Since VG specializes against mobs, this rotation is written for Abyss purposes.

VG has a balanced self TDM and Fire buffs - around 146% TDM and 115% Fire DMG during Decisive Blow. That's why she prefers gears such as Leeuwenhoek and Thales, which provide a mix of TDM, Fire DMG and Enemy Fire DMG Taken multipliers. 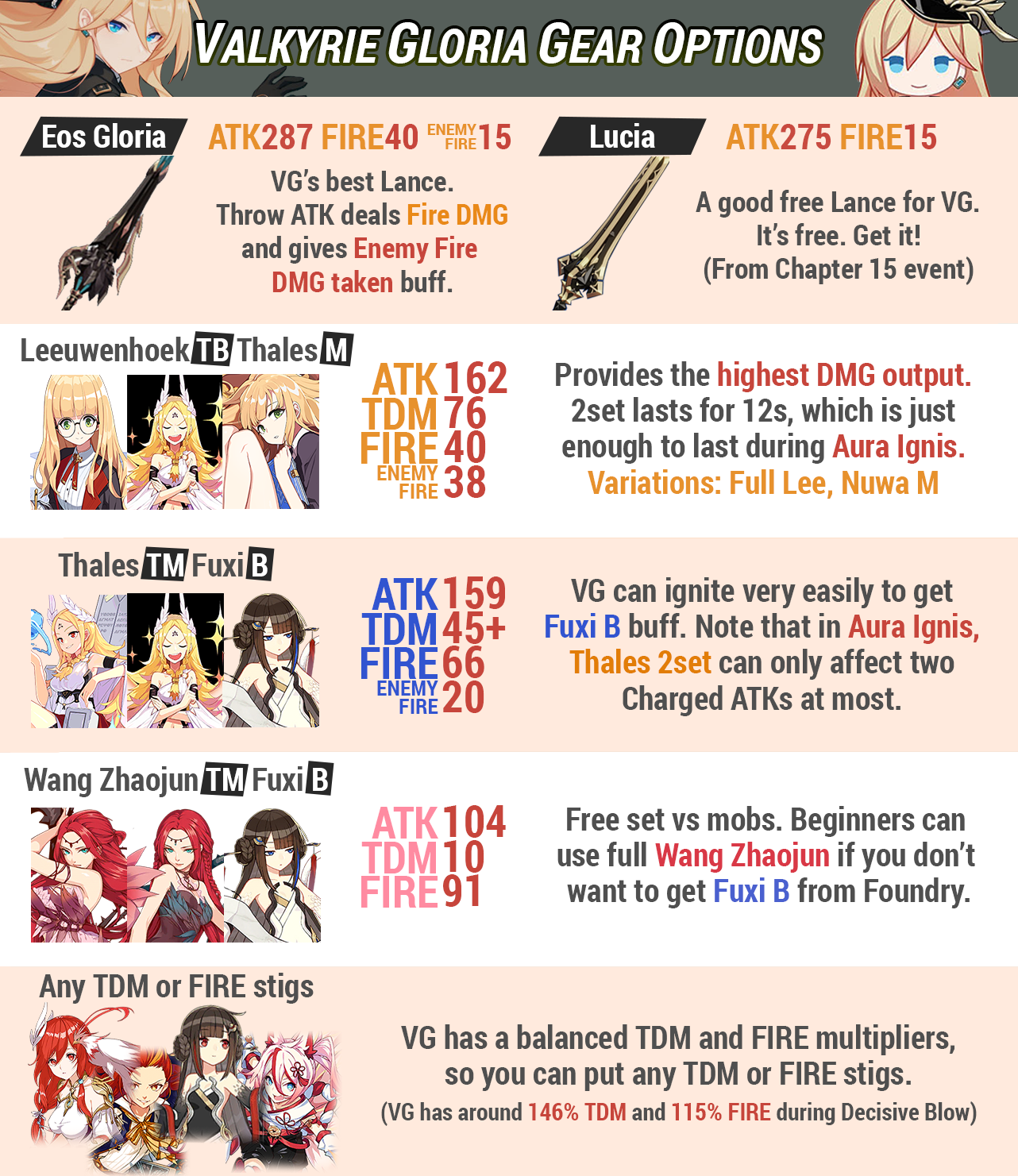 The best team for VG. AE provides tons of buffs, but most importantly -

1-VG is great against Abyss mobs for a number of reasons:

2-She is best used in

3-One thing to note: VG is bad against invisibility enemies like Doom or Bandit, because

4-Here are some examples of VG in Myriad Abyss. Note that BETA Abyss only has five floors, similar to Q-Gateway.

ARENA
Unfortunately, VG does not get a good score against all Arena bosses. A few reasons:

She only gets decent score against Argent Knight: Artemis boss, which already has other options, for both beginners and veterans.

Maybe one day there will be a QUA boss or mob that takes 20x damage from Lance user, then another 10x Fire DMG, then VG will have a use in Arena...

⭐Congratulations, you have mastered VG! Use what you've learned today into practical use. VG will definitely help you in Abyss! ⭐

?In terms of investment priority, VG is currently not high in the priority list, because she's only good at mobbing, and there are a lot of other stronger, versatile, farmable valks (such as Hawk of the Fog). However, her stigmata Leeuwenhoek, is one of the best Fire set right now, so if you do get it, you're not just gearing VG; you're gearing your whole Fire team. ?

? That's it, captains! If you have further question or suggestion, you can contact Captain Marisa on Youtube, this Discord or the Official Honkai Discord. ?