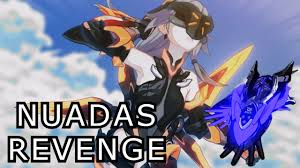 Nuada's Revenge is one of two PRI-ARM weapons introduced in version 3.6. This weapon is the 6* upgrade to Nuada's Grief and is specially tuned to Shadow Knight (SK). SK has been mostly missing in the current meta, sometimes used as a support due to her strong leader skill. Unfortunately, Nuada's Revenge does not add anything new for SK, instead it mostly just gives her more of what she is already good at. However, that does not mean we should completely count out SK or the weapon as a whole.

Nuada's Revenge cost quite a bit to acquire and max:

Nanoceramic is easily farmed through daily events, but the former two are not. Einstein's Torus' main source is through event shops and Weapon Resonance, meaning it will usually take 4 gacha weapons. Including the level 50 gacha glove, you essentially need 5 gacha weapons and 3 honkai cubes to max a PRI-ARM. SC Metal-H2 are not too cheap either. You can slowly grind through weekly events and event shops, but if you are running short on time, the other option is Asterite shop.

This guide will go over the weapon's abilities, who can wield it best and it might not be only the default S-rank Shadow Knight, and whether it is worth your resource investments.

The PRI-ARM form of Nuada's Grief. Schicksal's first successful attempt at application of PRI-ARM technology. After countless failed attempts, St. 1503 Labs finally revealed the sheen out of the dark iron.

Active Skill - Champion of Danu (SP:0 CD:20s): Deals a powerful punch directly in front of you, dealing 500% Atk of Lightning Damage to enemies and inflicting 750 dmg of bleed per 0.5s for 12s. Damage is doubled during Burst mode.

This ability costs 0 SP, making it nice for SP dependant valkyries like Shadow Knight and Hawk of the Fog (HF), the two Lightning valkyries that can make use of the weapon. Bleed is also an extremely powerful status for SK's bonus damage skill: Empty Heart.

The additional Lightning damage speaks for itself, making this the best glove for Lightning valkyries. The 30% Attack speed benefits SK greatly. The revive effect is always nice to have, although not something you want to take advantage of.

The passive really shines on SK, greatly boosting her survivability in Burst mode. The Lightning Shockwave also stacks up to a significant 24.5% Lightning damage taken after 10.5s within Burst mode, and SK traditionally enjoys remaining in Burst mode to dish out her damage. However, today's meta demands fast paced rotations, making it much harder to exploit its benefits with today's playstyle.

There is not too much to say about Nuada's Revenge. It will be a strong damage increase for the two valkyries that traditionally use Nuada's Grief: Shadow Knight and Hawk of the Fog. For damage dealers, they need any additional damage they can get, so simply the 130 extra Attack stats alone warrants getting this weapon.

Whether or not you invest in this weapon depends on whether or not you play HF or SK, and since this is a damage dealing weapon, level 65 is a must if you choose to experience its full potential. From the competitive perspective, HF is a top tier valkyrie and that is enough to justify the investment.

Nuada's Revenge has made HF even stronger than before, while also allowing SK enough damage to be a niche pick for certain boss matchups.

LE with MAG-Typhoon is mandatory. However, the 3rd position is flexible to any psychic type elemental support valkyrie. Common options include Molotov Cherry (MC) as a Blood Dance user, Phoenix (Phx), and Divine Prayer (DP) as a Thunder Kikaku user, but are not limited to those options You really just want to be able to continuously rotation between applying debuffs and dealing damage with HF.

With the introduction of Ishikawa, it widened the pool of stigmata options, but it are not limited to these.

Like before, and in any other Lightning teams, LE with MAG-Typhoon has become irreplaceable. The choices for the 2nd support remains flexible as stated in Team 1, and are not limited to psychic types this time. High ranks for SK and LE are extremely important as starting SP and SK's additional skills and Atk are crucial. SK teams needs to kill the boss in 1 rotation, making this much more gear reliant than other options.