Arriving in Patch 3.5, 11th Leitourgia is the PRI-ARM upgrade of the weapon 11th Sacred Relic. Specialized for the Theresa battlesuit Celestial Hymn, this weapon further amplifies her Physical support capabilities by providing substantial buffs to not only her teammates, but also Celestial Hymn herself.

Summons and expands the weapon, generating a Holy beam every 2s that deals 750% of Physical DMG against enemies within an AOE. Nearby teammates also gain 20% Crit Rate for 10 seconds. If equipped by Celestial Hymn, casting this skill also recovers 5 SP per second, for the same duration. This skill has a 15-second cooldown.

In particular, Celestial Hymn will gain 30 SP (50 minus 20) every time she casts this weapon skill.

Wielder's attacks on an impaired enemy has a 60% chance to recovers the team by 89 HP, with a 3 seconds cooldown.

What Celestial Hymn was lacking the most was a weapon that complements her abilities, and 11th Leitourgia solves just that. It solves Celestial Hymn's biggest problem of SP cost, and she can cast Ultimates much easier than ever before. Having this weapon puts Celestial Hymn back to top tier again.

And in case you forgot, Celestial Hymn's Ultimate pulls enemies together, and inflicts all of them with a 75% DEF Impair for a whopping 10 seconds.

The 20% Crit Rate is another huge bonus, and it fully stacks with all other similar effects, such as from Drive Kometa's Shield and Leader Skill, or from stigmas like Kafka B.

These support stigmas will considerably improve your team's performance, however Celestial Hymn will function just fine without them. Only consider investing in these stigmas when you already have competent, geared Physical Damage dealers.

The previously recommended Kallen Hymn set will continue to function. The 2-set effect will increase all teammates' Total DMG by 8% following a cross drop, and 22% after Celestial Hymn casts her Ultimate, for a duration of 7 seconds. Of course, Newton B's effect is also active in this build. No, you cannot own 2 of them at the same time. This is a bug in Beta version.

Similar to previous PRI-ARMs, the first and foremost requirement on obtaining 11th Leitourgia is having 11th Sacred Relic on your Weapon library. To obtain 11th Sacred Relic, you have several options: 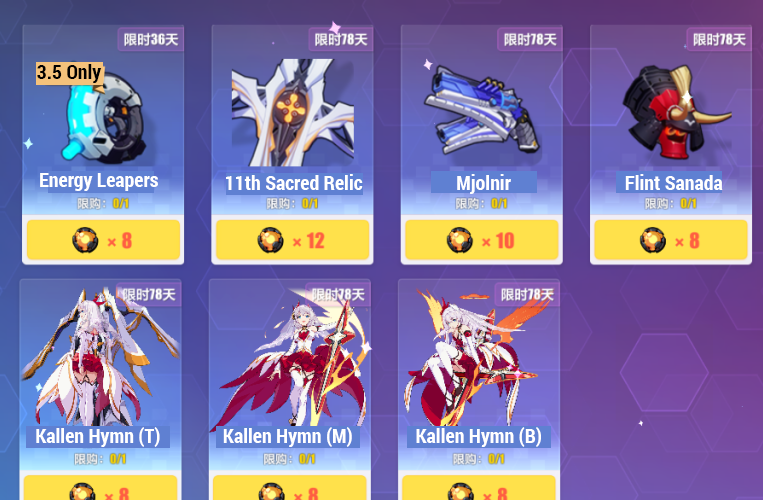 Since it's the third month of Battle Pass, most F2P players who haven't bought anything from this shop will have exactly 12 Lucions by the end of this Patch. As such, I recommend every F2P player to grab 11th Sacred Relic this way.

I myself will have to wait another patch though, since I slacked and missed one Lucion in the first month.

Next, you need to sacrifice a Lv.50 Cross that wasn't acquired from Events, Chronicles or with AE Imaginons. As such, weapons like Silver Reaper or Ranger's Cross are not applicable.

11th Leitourgia and Celestial Hymn delivers astonishing physical support capabilities, and most Physical team will fall short without them. With Patch 3.5 arriving, the chance of getting Celestial Hymn has become higher for all Captains thanks to the new Dorm supply system. Therefore, 11th Leitourgia is a solid recommendations to all Captains, and will become a great reward for Captains when they decide to break through Lv. 80.