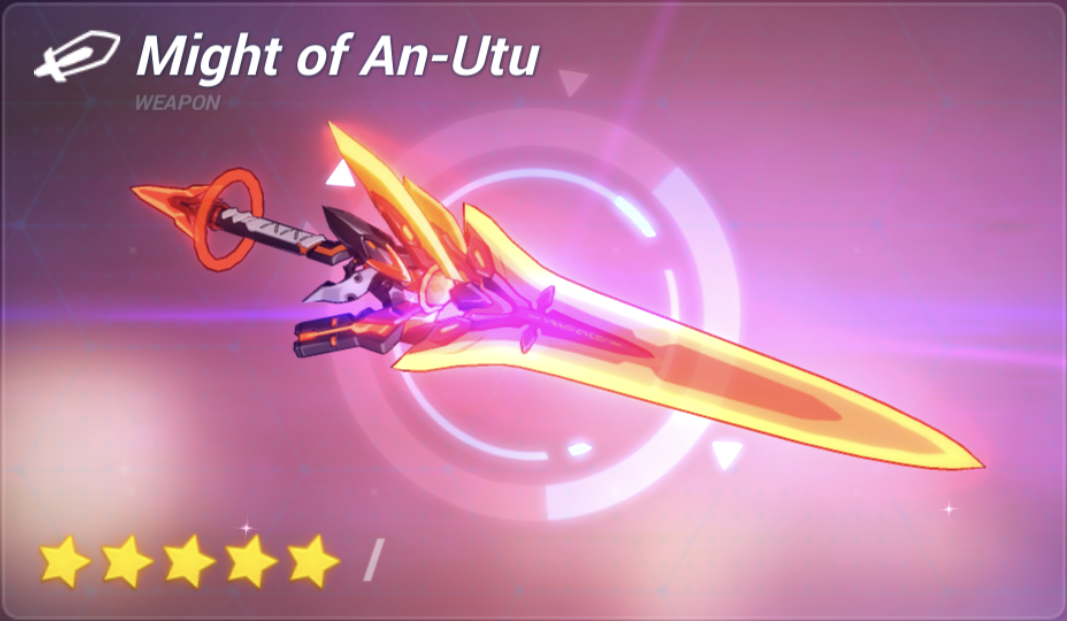 A primed form of the Key of Destruction formed in the hand of its original wielder. The Might of An-Utu is a literal incarnation of the god of destruction, and emits a radiance rivaling that of a supernova. Only a superhuman warrior is strong enough to harness its infinite reserves of destruction.

The wielder gains 30.0% Total DMG Multiplier, and her weapon active inflicts 20.0% Fire Vulnerability on enemies for 10s. The wielder's initial SP +30.0. Does not work in Open World.

In co-op raids, team attacks gain 18.0% Total DMG Multiplier and the team heals for a 7.0% HP for 5.1s whenever a character uses a weapon skill.

This new weapon has a lot of bonuses per skill, and therefore a lot to digest.

The passive offers bonus Total DMG Multiplier and +30.0 SP. This passive has 3 effects. The first is a huge Total DMG Multiplier buff that lasts forever. The second one adds 30 SP to the wielder upon entrance into battle. This skill can pair off with game modes that already give an initial SP and both Shadow Knight and Lightning Empress's initial SP bonus leader skills. As a result, this part of the skill alone, makes the weapon very high tier. It works great in the competitive scene and helps the Solar Prominence skill gain a stack. And lastly, whenever the Libration to Fire hits the enemy, they receive a Fire intake Debuff for 10 seconds. Even the weapon skill itself can make use of that debuff because the Libation hits multiple times.

An assault skill which deals a huge burst of Fire DMG. It's a sp cost-free, high cooldown, big dmg attack. While it does cause the user to lose up to 40% of their HP, the trade-off is worth it. This active weapon skill's dmg is based on the number of stacks that it has. It always starts out with 1. The weapon gains stacks (max hold is 2) whenever the user uses at least 30 SP. Note that any usages of SP that is over 30, the extra will not count towards another stack. It is an extremely good way to deal a huge amount of damage after setting up.

It's a standard buff for the team that provides a Total DMG Multiplier bonus and a bit for healing for the entire team whenever a teammate uses a weapon skill. This co-op skill has both strength and healing incorporated into it that has no cooldown, making this a very strong passive skill. 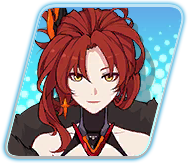 Step aside Godslayer: Surtr because the Might of An-Utu is Himeko's Vermilion Knight: Eclipse's (VK) new signature weapon! Might of An-Utu guarantees VK to be able to use her ultimate asap without relying on other sources of SP. VK also has plenty of invincibility frames, which includes times when she can build up stacks uninterrupted. VK's usually only uses her two charged attacks and ultimate. So Surtr's attacks speed and SP gain is nothing compared to the pure damage buffs and debuffs that the Might of An-Utu provides.

With this new weapon, VK is the perfect counter against Argent Knight: Artemis (AKA). Below is a sample video of VK versusing in Exalted Memorial Arena. 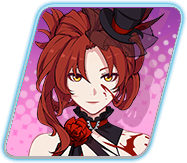 Blood Rose (BR) is another Fire 2-Handed wielder who can utilize Might of An-Utu. The 30 SP bonus enables her to use her ultimate right off the bat. And the total DMG multiplier bonus also buffs the physical dmg that BR deals as well. It's a great choice for her, but not the best choice. BR is discouraged from using Might of An-Utu's active weapon skill because the weapon skill decreases HP, conflicting with BR's burst mode that burns down her own HP.  Surtr is still the best weapon option for BR.

Note: Keep in mind that this weapon requires Honkai Cubes to upgrade, not Raid Jades

Might of An-Utu is a very powerful weapon. It gives VK the extra push she needs to really deal damage. It has so many benefits that it might as well be considered a rework for VK. However, Might of An-Utu can be utilized by only a few valkyries. If you really enjoy playing VK and wish to make her even stronger, Might of An-Utu is definitely the weapon to invest in.