Keys of the Void Weapon Guide 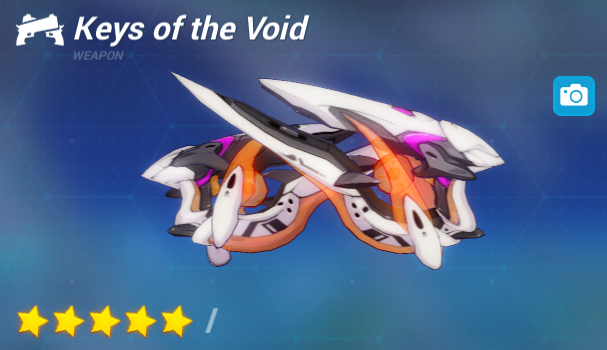 A guided weapon system summoned from the Void Realms by the 2nd Herrscher upon awakening. These dual pistols do not fire bullets, but “commandments” that tear through the space-time fabric. K423 is the perfect vessel designed by Otto for receiving the Herrscher of the Void when she returned. However, this vessel exerted a strong influence upon the powers of the Herrscher and altered her physical form as well.

Herrscher of the Void equip bonus: Space Core generated is buffed by the Herrscher's own abilities, deals another 150% ATK of Physical DMG and regains another 60 Herrscher Charge.

Gates of Revelation
An assault skill that deals high AoE Physical DMG as well as shield break, all for a low SP Cost. When equipped on Herrscher of the Void, it also adds utility, regenerating 120 herrscher charge (60 from the generated Space Core plus the extra 60) on demand while dealing extra damage. This skill is great to use for a little extra damage or to extend the duration of Herrscher Form. The quick animation and low SP cost compared to the large amount of damage it deals makes it a fantastic skill for any valkyrie.

Knight Moonbeam has a relatively high CRT stat to start with, but at SS rank she gains up to 15% Crit Rate as a passive depending on combo count. With this passive crit rate, she can make very good use of the passive Crit DMG that Keys of the Void provides. Since her Ultimate skill deals more damage the more SP it consumes, the cheap 5 SP active skill means it is not very obtrusive towards Knight Moonbeam's general game plan.

Void Drifter can utilize Keys of the Void pretty well. Since she is a physical damage dealer, she gains full benefit from the physical damage and crit damage boosts. At maximum core level, Void Drifter gains crit rate from her Void Sync passive as well as after casting her ultimate. This means that she benefits even more from the crit damage boost from Keys of the Void. Although she doesn't gain much from the active, it's a very low SP skill with a quick animation that provides a bit of extra damage.

The majority of players who are not aiming for super competitive performance will benefit a lot from owning Keys of the Void. The bonuses it provides Herrscher of the Void are valuable, and they make her easier to play due to having lesser reliance on support. For extremely tanky bosses such as those in the Exalted tier of Memorial Arena, Myriad level Dirac Sea or Q-Singularis however, non-swapping teams will not work nearly as well due to lack of support debuffs. In these situations, Herrscher of the Void will benefit more from other weapons such as Tranquil Arias or Jingwei's Wings.

Overall, Keys of the Void are a powerful weapon that can benefit many Valkyries, and Captains generally will not regret upgrading this pair of pistols, but it is still important to note that they may not always be the best option.