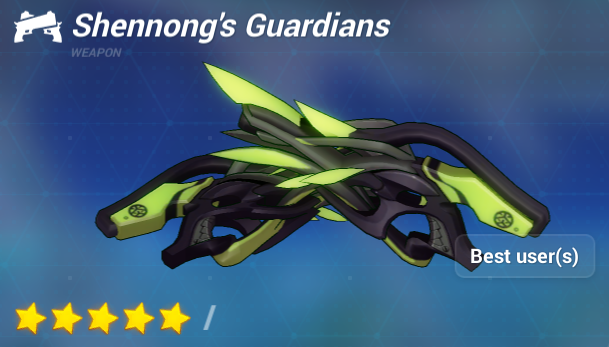 A Pantheon-series weapon manufactured by Shicksal using Soulium unearthed from the Nine Realms. The black and green paint job reminds people of shoots sprouting from the black earth.

Active: Enchantment of Herbs
[SP: 20] [CD: 20s]
Generates a global aura that affects all enemies. Weakens target enemy (does not work on bosses), reducing its ATK by [46-70%]. Immobilizes all other enemies besides target and inflicts Time Freeze. All other enemies (except said target) cannot be targeted and take greatly reduced DMG. This aura lasts [7.6-10s].

Enchantment of Herbs
Note: The in-game tooltip for the active skill states that it impairs enemies. However, this is incorrect as impair is the term used to reduce defense. The weapon actually weakens enemies.

The weapon's active skill is a utility crowd control ability, which targets and temporarily weakens a non-boss enemy. An aura appears around the target enemy and inflicts Time Freeze on all other enemies on the map, stopping them in their tracks entirely. However, these immobilized enemies cannot be targeted and take reduced damage. The active can be used to isolate and prioritize targets, but since it doesn't affect bosses its uses are rather limited.

Suppression
The passive offers bonus damage to weakened enemies, making it powerful in team compositions that make use of the weakened status effect.

The game has been pushing weaken as a status effect more commonly, most notably with the release of the Drive Kometa augment for Yamabuki Armour. In the right team compositions supported by weaken, Shennong's Guardians may provide one of the largest overall damage boosts for pistol users. However, since the damage is directly tied to weaken, the pistols require solid team support for it to be effective.

Valkyries whose playstyle revolves around constant swapping, as this allows for support teammates to apply the weaken debuff.

Valkyrie Ranger's Augment, Void Drifter, is a nice match for Shennong's Guardians. Her QTE triggers from weakening an enemy, allowing her to always switch in during an active weaken debuff to deal large amounts of damage. In addition, Void Drifter's Inner Turmoil passive forces her to perform the constant-swap playstyle. This results in an easy reapplication of weaken when she is teamed up with sources of weaken such as Drive Kometa or Silver Cleaver (a cross weapon).

Since Herrscher of the Void can benefit from a swapping playstyle, she can also utilize Shennong's Guardians. When teamed up with Celestial Hymn with Silver Cleaver, she can gain the bonus damage to weakened enemies while also benefiting from the buffs and debuffs that Celestial Hymn provides, thus allowing for some very high burst damage. Alternatively, she could pair with Divine Prayer and Drive Kometa for easy weaken application as well as high defensive buffs, making the most out of Drive Kometa's shield and Divine Prayer's healing.

As an old weapon, Shennong's Guardians are rather hard to obtain as it is never featured in Focus Supplies anymore. In addition, teambuilding around the pistols can be inconvenient and the damage dealing Valkyries may also use other pistols that are easier to come by, such as Tranquil Arias.

For the majority of players, Shennong's Guardians are likely not worth trying to obtain. However, if a Captain did happen to own a pair through a lucky Standard Supply drop, it is still a potentially powerful weapon in its own right and may be worth trying out with proper team support.