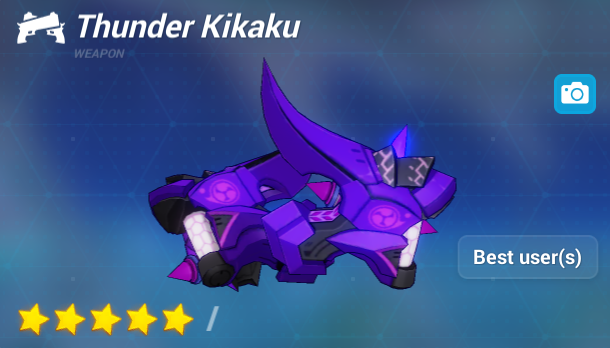 During Sengoku Jidai, a silver-haired traveler slew the Honkai beast “Night Owl” that roamed in the Far East. Nagamitsu the Bladesmith then forged this weapon using the two horns of the beast. This weapon was named as a blade despite being a pair of pistols.

Will-o'-the-Wisp
This utility active is rather unique. It deals up to 10,240 damage at max level before any lightning damage or total damage multipliers and sticks to the enemy, meaning that it continues to hit even after the wielder swaps out. This means that it can even reapply stigmata effects such as Mei: Pool Party (M) or Newton (B) after swapping out. Combined with the fact that it hits twice per second for 8 seconds, it is a fantastic support weapon for the cross Oath of Judah as it provides up to 16 extra hits. If the wielder is in Burst Mode, casting the active will also apply Futsuno Mitama, causing the enemy to take more lightning damage.

In addition, Kikaku has a passive that makes enemies take extra lightning damage when hit by a Burst attack. This can used in conjunction with Divine Prayer's ultimate to buff an Oath of Judah team to obscene levels of damage in the lower levels of Memorial Arena, Dirac Sea, and Quantum Singularis, or with the recently released Mag-Typhoon weapon to quickly burst down even the tankiest of bosses within the Exalted tier of Memorial Arena.

This setup is meant as an Oath of Judah, Shadow Knight, or Lightning Empress support setup to maximise lightning damage done. Any pistol wielder with a burst form will suffice, but Divine Prayer is the best choice since her burst form also causes a long duration global time fracture, making it both easier to hit the boss as well as get higher scores in Memorial Arena. She can utilize the 2 set effect of the Dark Jixuanyuan stigmatas to build SP quickly before casting her ultimate and using the active skill of Thunder Kikaku to greatly boost lightning damage done to the target.

Although not quite as potent as her signature weapon, Tranquil Arias, Sixth Serenade can still make good use of Thunder Kikaku's 30% Total DMG Multiplier to deal damage. She doesn't quite benefit from the active or the lightning DMG boosting aspect, but the total DMG boost is already enough to make it worth using if Tranquil Arias is not an option.

Thunder Kikaku is primarily a support weapon that can also double as a damage dealing weapon due to its passive 30% TDM boost. This makes it a high-value weapon to upgrade, as it is extremely flexible in application. However, it is important to note that while it is effective on many damage dealing Valkyries it is rarely the best option. Regardless, Thunder Kikaku is an incredible pair of pistols that will benefit any Captain fortunate enough to own them.