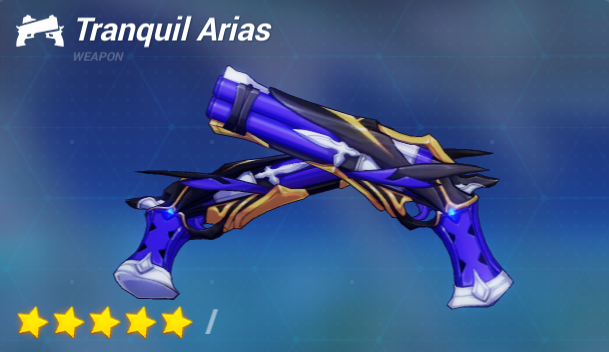 A mysterious weapon stored in the deepest vaults of Schicksal St. 1504 Labs. Manufacturing date: Unknown. Past wielders: None. No records of this weapon could be found in the Schicksal database. Its very existence is like the shadowy darkness that descends quietly with the night..

Passive 2: Night Bringer
Character gains [11-15%] Physical and Elemental DMG. When deployed, character gains [26-50%] Total DMG Multiplier for [3.4-5 seconds]. This buff triggers once every 30s when the character is deployed. Using the Ultimate skill resets the CD and immediately activates the buff.

This buff has a 30 second cooldown, but using the ultimate skill resets the cooldown and immediately activates the buff.

Waning Moon
This passive grants a little bit of extra Physical as well as Ice DMG to enemies who suffer from time slow. Due to having a rather long cooldown and dealing somewhat low damage, this passive skill isn't extraordinarily powerful but every little bit of damage helps.

Night Bringer
Arias provides a flat 15% Physical and Elemental boost, as well as a powerful 50% total damage multiplier buff gained upon swapping in or casting ultimate. This makes Tranquil Arias amazing for any Valkyrie that swaps in and out a lot, regardless of whether they are a physical or elemental damage dealer. Considering endgame level content will generally revolve around constant Valkyrie swaps to apply buffs and debuffs, Arias will have very high DPS uptime.

As Sixth Serenade's signature weapon, she fits perfectly with the swapping playstyle since she relies a lot on her QTE. This allows her to maintain high uptime of the huge Total DMG multiplier buff. Sixth Serenade deals Ice DMG and inflicts time slow as a part of her regular attack combo, meaning the Waning Moon passive can be activated regularly and will deal more damage since they are boosted by Sixth Serenade's stigmatas.

Since Herrscher of the Void can utilize from quick swaps to support valkyries such as Celestial Hymn, she can make great use of Tranquil Arias. A quick swap in allows her high-damage QTE to deal even more damage with the Total Damage Multiplier buff. In addition, since Herrscher of the Void has such a high damage ultimate she greatly benefits from Tranquil Arias as the buff cooldown resets upon ultimate cast. Tranquil Arias also deals physical damage with its Waning Moon passive, which can be boosted by her Celine Ascended set.

Void Drifter is an ideal wielder of Tranquil Arias as well, due to her Inner Turmoil passive forcing her to constantly swap. This results in high burst damage when you utilize her QTE with a source of impair, such as Celestial Hymn. Since her QTE also has a global time fracture, it benefits from the Waning Moon passive to deal a bit of extra damage. Void Drifter's general combo for burst damage is usually casting a QTE into 2 combo attacks, then following up with her ultimate to cast 2 more combo attacks. With Tranquil Arias, she can maintain the 50% Total Damage Multiplier buff for the entire duration of her main combo.

Tranquil Arias is an extremely powerful burst damage weapon, useful on any pistol wielding Valkyrie that swaps often. If Herrscher of the Void or Sixth Serenade are staples in your Valkyrie roster, Tranquil Arias will definitely be a high priority weapon to both obtain and upgrade.