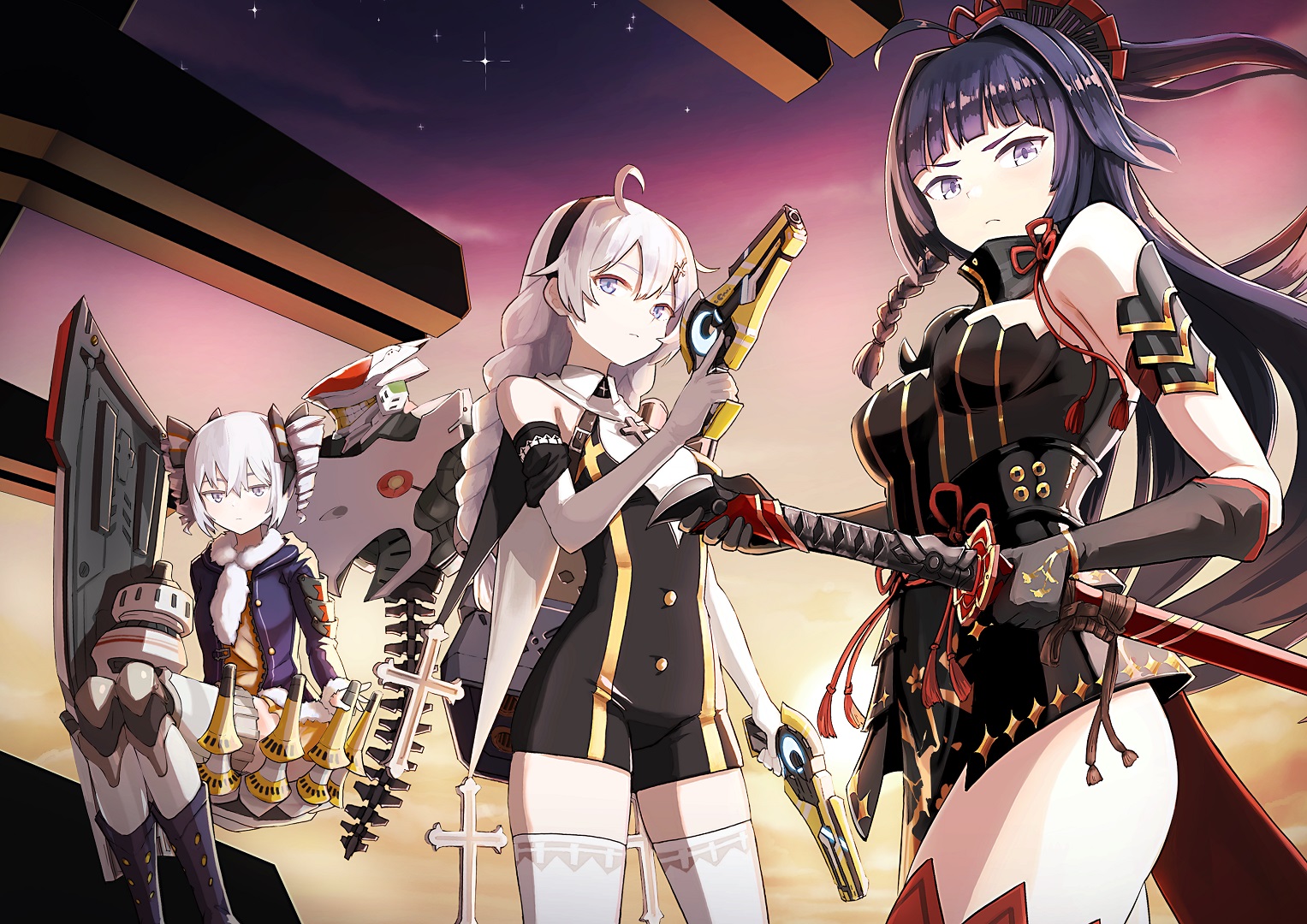 Divine Prayer is a PSY-type Kiana battlesuit, and is one of the earliest battlesuits introduced in Honkai. She can be obtained through regular farming and Standard Supply, and thus has been present in almost every Captain's roster.
While lacking in raw damage, Divine Prayer is regarded as one of the best general purpose support characters in the game, boasting a wide variety of healing and damage boosting skills. Adding in the fact that she doesn't require any specific gear to function, Divine Prayer is a solid recommendation to every player in the game.
In this article, I will explain Divine Prayer's skills in accordance to their usage, as well as listing out some gear recommendations for further enhancing her support capabilities.

During Ultimate, Divine Prayer's attacks gain increased range and base ATK, but the increase in raw DPS is still not viable in most situations.

But, remember when I said Divine Prayer is one of the best support characters? The next paragraphs will cover her supporting and team-enabling capabilities, which are what makes her excellent in the first place. It only gets better from here.

Divine Prayer has one of the best physical support abilities in the game. When she's not on the field, every 10 seconds, an enemy will be struck by Divine Penalty, receiving a 80% DEF Impair for 6 seconds. This skill is extremely valuable during boss fights, as the enemy will be kept under Impair for more than half of the time.

Since most Physical damage dealers (eg. Herrscher of the Void or Night Squire) have a burst duration longer than 6s, you can perform damage cycles normally and treat the Impair effect as a bonus. For characters with shorter burst duration (such as Luna Kindred), performing damage bursts right after Divine Penalty hits is recommended to guarantee maximum damage.

Keep in mind that Divine Penalty will not proc Newton B or any similar support stigma, and you'll need to use alternative methods (such as Jingwei's Wings Active) to achieve such effects.

Divine Prayer's Ultimate usually lasts for 6-13 seconds, and during this time, the whole team gains 50% Move Speed and 30% Attack Speed. The increased Attack Speed benefits most damage dealers, especially those with strong Burst modes such as Night Squire or Argent Knight: Artemis. This skill is unlocked at SS Rank.

Divine Prayer packs a variety of healing skills, and all of them apply to the whole team. In details:

The skill Quasar (unlocked at SSS Rank) allows Divine Prayer to revive a downed teammate. Once per battle, when an ally receives a fatal attack, instead of dying, they will be switched out by Divine Prayer, automatically recover 600 HP, and the attack will be negated. At this point, you can cast her Ultimate to further recover that teammate's HP.

This skill will trigger before Umbral Rose and Rozaliya's passive skill. As such, those characters when combined with Divine Prayer will have 2 revival charges.

Divine Prayer's Evasion skill knocks the enemy into the air, applies Time Lock and bleeds them for 8 seconds. At S Rank, she gains another Evasion charge, and the cooldown for each charge is decreased to 5 seconds. This skill often translates into a quick damage buff, as most Elemental characters deal more damage to Time Locked enemies.
This skill counts as a hit, and therefore will proc Newton B and similar support stigmas.

Divine Prayer's Ultimate The World Valkyrie Refuge casts a global Time Fracture for its entire duration. This skill requires 75 SP to activate, consumes 20 SP upon activation, and drains 10 SP per second (20 SP/s after 20 seconds) until her SP gauge runs out. As such, any form of SP recovery to Divine Prayer will extend the duration of Time Fracture.

For this reason, Divine Prayer is also recommended in environments where prolonged Time Fracture is preferred, such as Raids or Armada Boss. SP recovery abilities, such as Chariot or Bladestrike's Team Skills, will greatly extend the Time Fracture duration.

As a support character, Divine Prayer does not require any particular weapon to function. However, if you have any of these weapons lying around, equipping them to Divine Prayer will considerably improve your team's overall performance. I don't recommend 2nd Sacred Relic, as it requires Divine Prayer to stay on field to take effect, and the increased SP gain is mediocre compared to another option listed below.

Mjolnir is the recommended weapon for general physical support. Mjolnir acts as a shield breaker, and can cast a 80% DEF Impair which fills in Divine Penalty's downtime. Depending on the situation, you could hit a Time Locked enemy with Mjolnir's Active skill for a longer impair duration.

Jingwei's Wings is heavily recommended for Divine Prayer if you equip her with Newton B. This weapon's Active skill has a 12-second duration, which allows Divine Prayer to proc Newton B twice without having to stay in battle. For characters with long Burst duration such as Herrscher of Reason, being able to proc Newton B off-field can lead to a massive performance boost. It's not required to level this weapon.

Judgement of Shamash is a decent general purpose support option. Its Active skill makes enemies take 15% more Total DMG from all attacks for 15 seconds, with the cost of 65% Max HP. Having innate healing capabilities means Divine Prayer will have an easier time with this weapon.

Similar to weapons, any piece of support stigma will further enhance Divine Prayer's supporting capabilities. Below are some of the most notable options.

Any 2 pieces of Dark Jixuanyuan set will greatly boost Divine Prayer's SP gain, allowing her to cast Time Fracture much more frequently during Raids or Armada Boss. Dirac B further adds on that by recovering SP upon Evasion, though it's not totally necessary.

Any 2 pieces of Fu Hua Musician set will act as a decent F2P support option. After exit, teammates gain 10% Total DMG, and 10% more Fire DMG if the Mid piece is equipped. 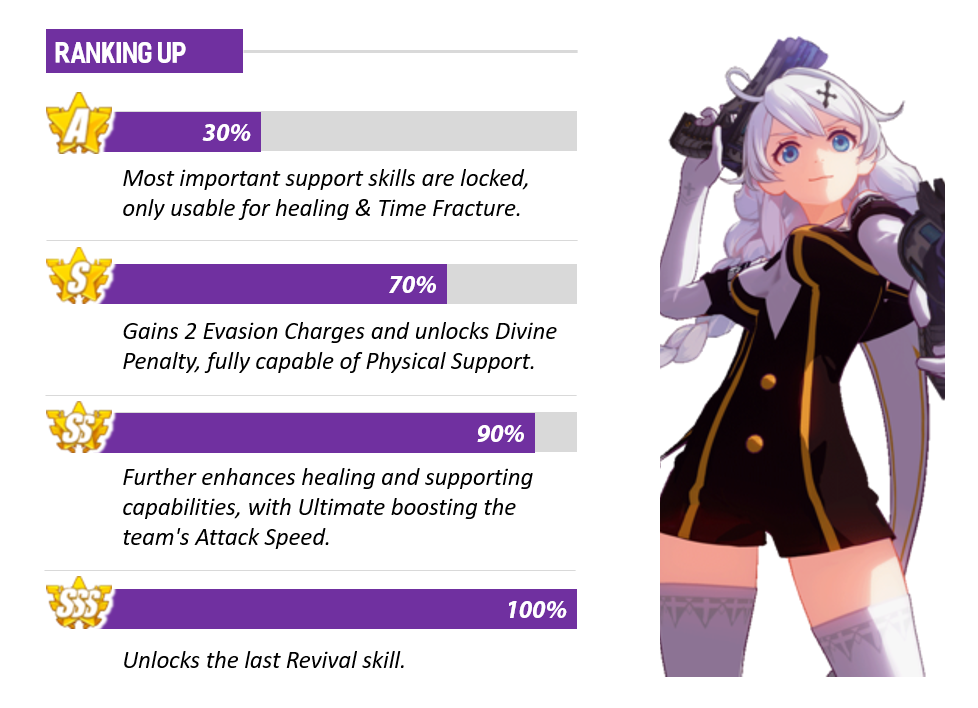 Divine Prayer is offered to players relatively early on in the game. Considering that she is very easy to obtain and level up, it's recommended for new players to farm her to S rank as soon as possible, and SS rank later on in the game.

Divine Prayer is one of the few characters that have stayed relevant ever since her introduction, despite having her kit mostly unchanged. While Celestial Hymn is getting a substantial buff in Patch 3.5 through the 6* 11th Sacred Relic, I can still see Divine Prayer being useful in many situations, especially for Captains below Lv. 80.