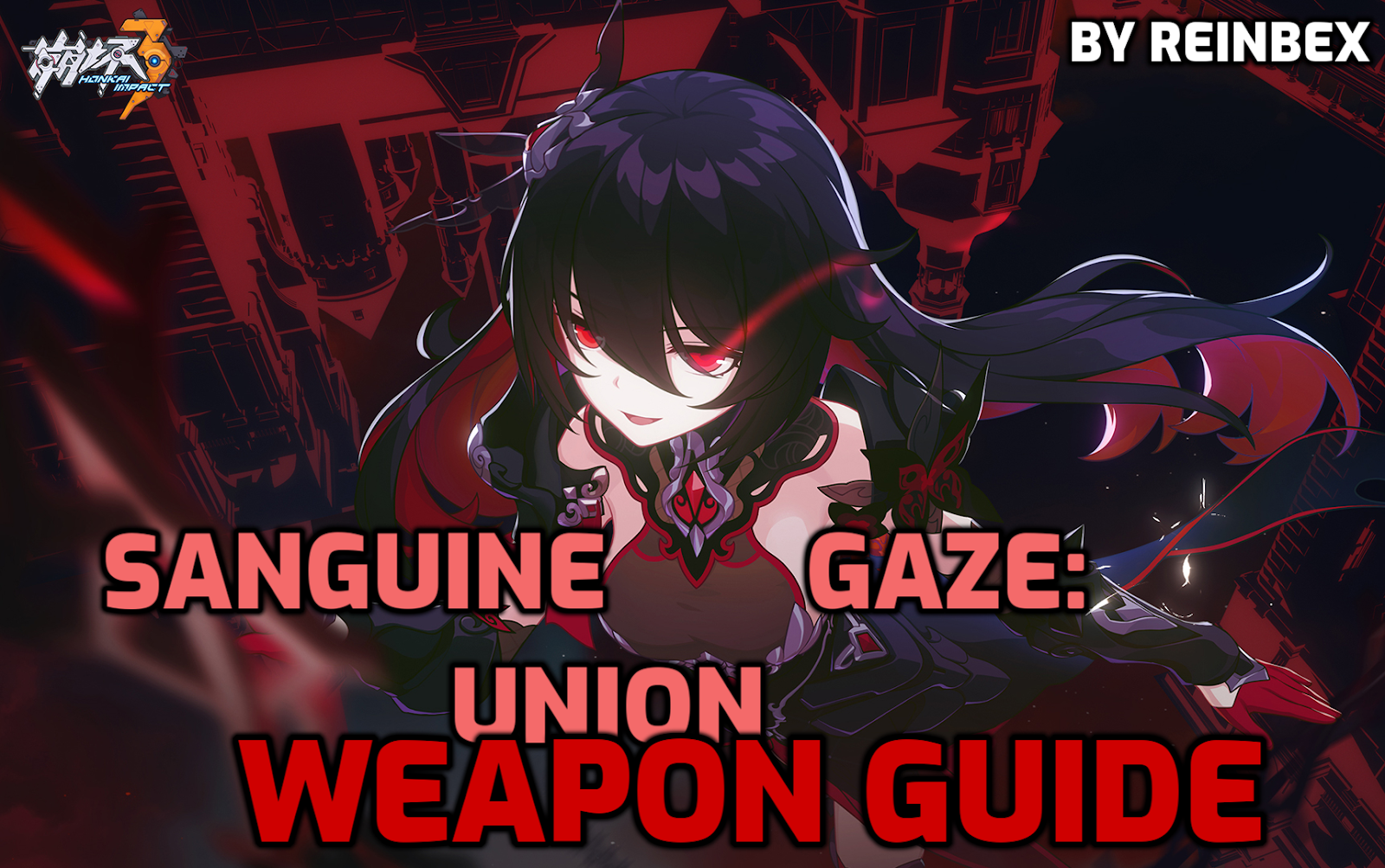 ★ Stats below are all Lv.65 figures

“When you gaze long into an abyss, the abyss also gazes into you.” Now that the two distinct personas have found harmony and union, their enemies can only pray before the sanguine gaze for the eternal nightmare to end.

[SP: 0] [CD: 7s] Use chain claws to grapple the target towards the wielder or send the wielder to the target and perform scythe slashes dealing 100% + 900.0% ATK of Ice DMG.
Starchasm Nyx equip bonus: Scythe slashes restore 1 Carmine Gash and can be connected into Sequence 4 of Basic ATK. In her Burst Mode, the weapon active is changed to slamming the area in front of her and dragging enemies nearby to her dealing 900.0% + 4*40% ATK of Ice DMG. Entering and exiting Burst Mode both reset the weapon’s active cooldown.

Peak into the Abyss - Passive

Union in the Dream - Passive 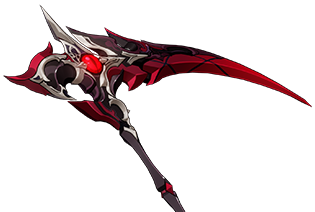 Closes the distance (if possible), deals Ice DMG, and helps SNyx restore SP. Like its normal counterpart, SGU‘s wep’s active also closes the distance between the wielder and target before dealing Ice DMG. It now costs 0-SP to activate. 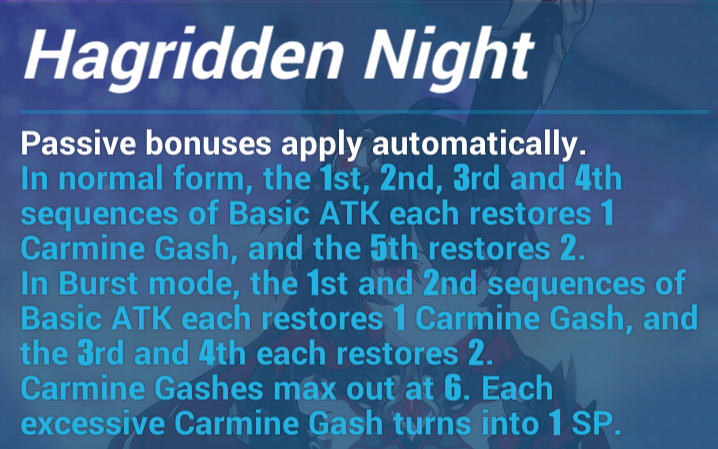 Carmine Gashes are a unique bar that SNyx consumes to restore SP and Ult sooner. This is important because SNyx’s main and best method of outputting DMG is via her Ult.

Also, if there’s no close enough target, using the wep’s active will fortunately not trigger its CD, but will waste time animating.

Peak into the Abyss

Provides Ice DMG and (Ult/Burst-only) TDM buffs. The passives are pretty simple and very strong. The buffs encourage the wielder to deal DMG via Ult and Burst mode since the TDM buff is only limited to those attacks. This synergizes well with the ult-reliant SNyx.

Union in the Dream

Provides TDM for Charged ATKs and Total DMG Reduction protection. SGU’s second passive buffs Charged ATKs, which is good for SNyx’s attacks that consume Carmine Gash. It does not buff her Ult finisher however. The refreshable extra Total DMG protection while the wielder does Charged ATKs is a nice touch.

First, here is a side by side comparison between Sanguine Gaze and the new PRI-ARM Sanguine Gaze: Union. The weapons are compared at their max levels. 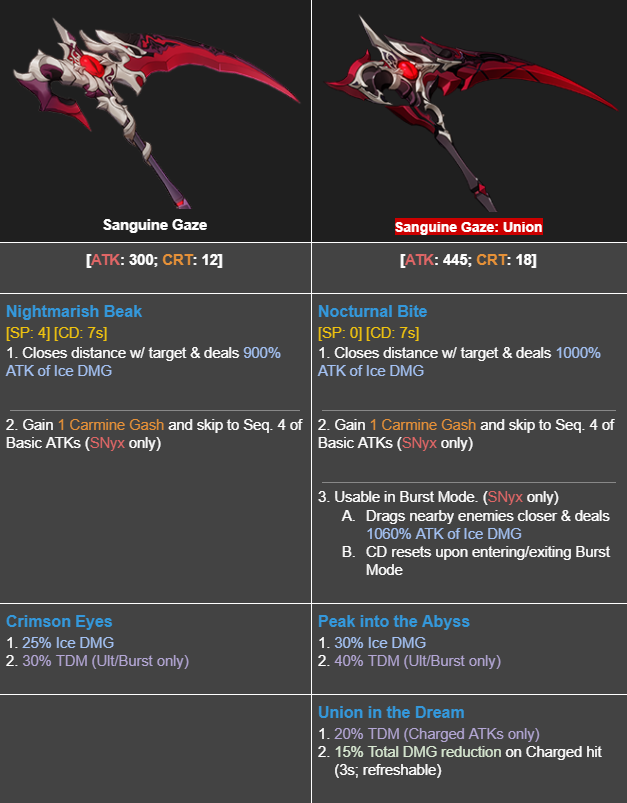 Since SGU is designed for Ice-DPSing, it will be compared to other similar scythe. All weapons are compared at their max levels. 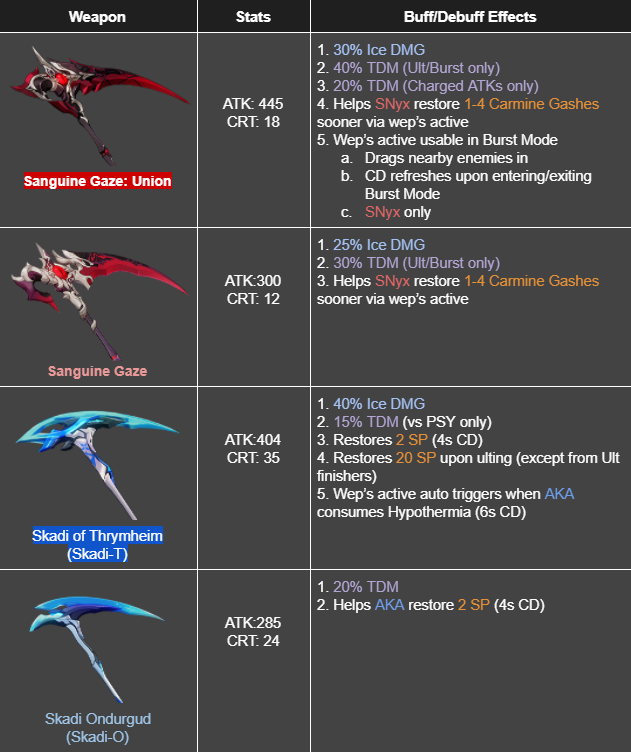 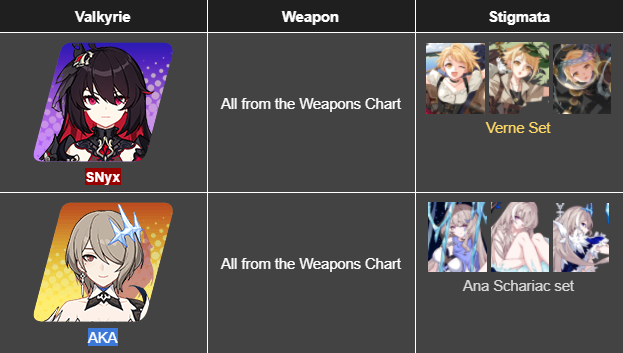 There were 4 DPS tests for each valkyrie, totaling 8. Each valk equips their signature stigs while their weapon choice will vary. Keep in mind these tests are to compare weapon performance per valk, not which valkyrie is better than the other. The test sequences for the valks are: 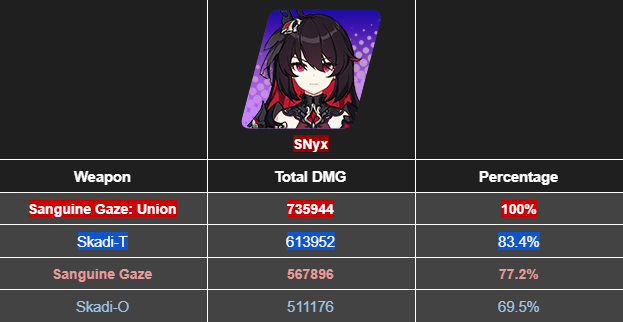 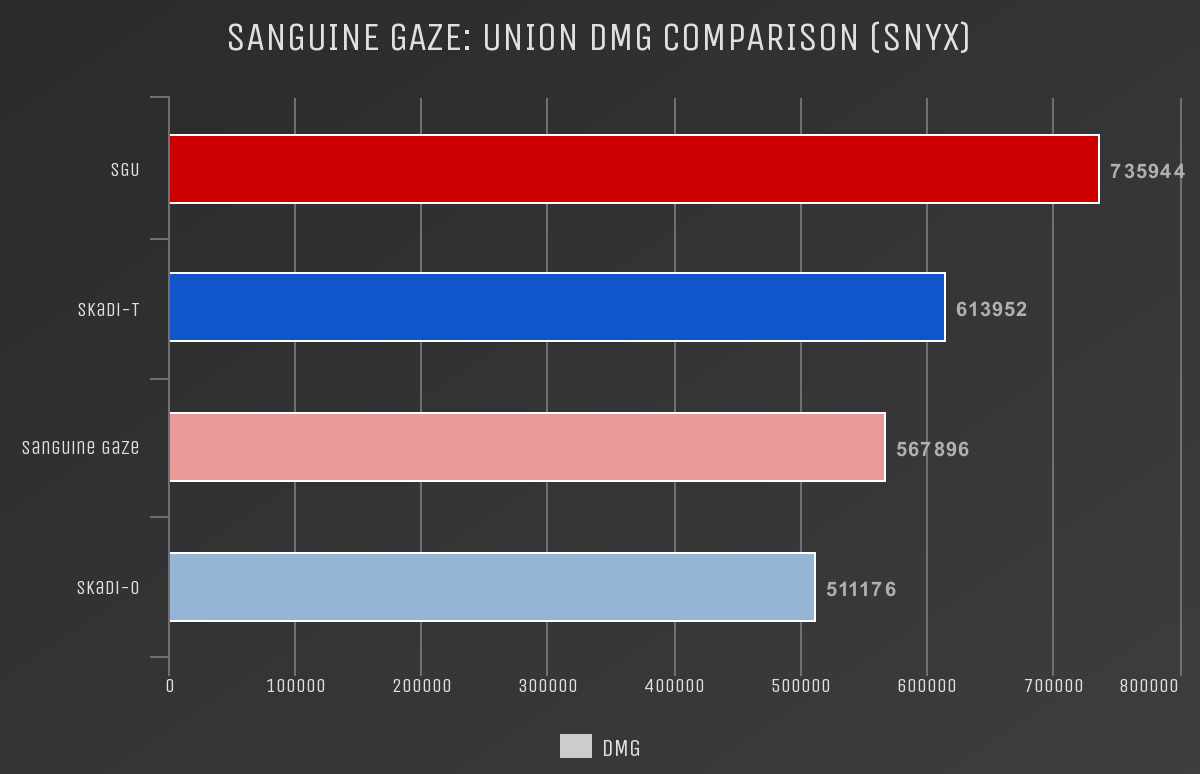 Based on the testing, it can be observed that SNyx performs best with SGU. Not only do the DMG bonuses synergize amazingly with SNyx’s playstyle, SGU’s wep’s active is the only wep’s active that can be used while SNyx is in Burst Mode, thus giving her access to more forms of DMG output. 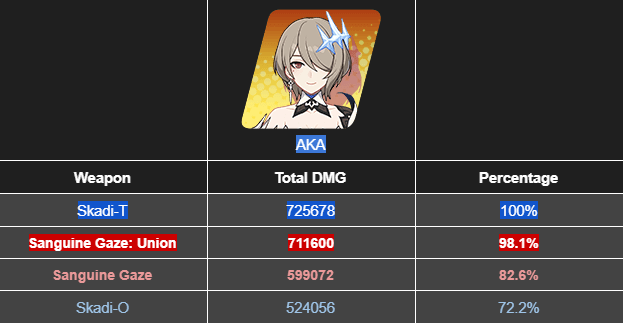 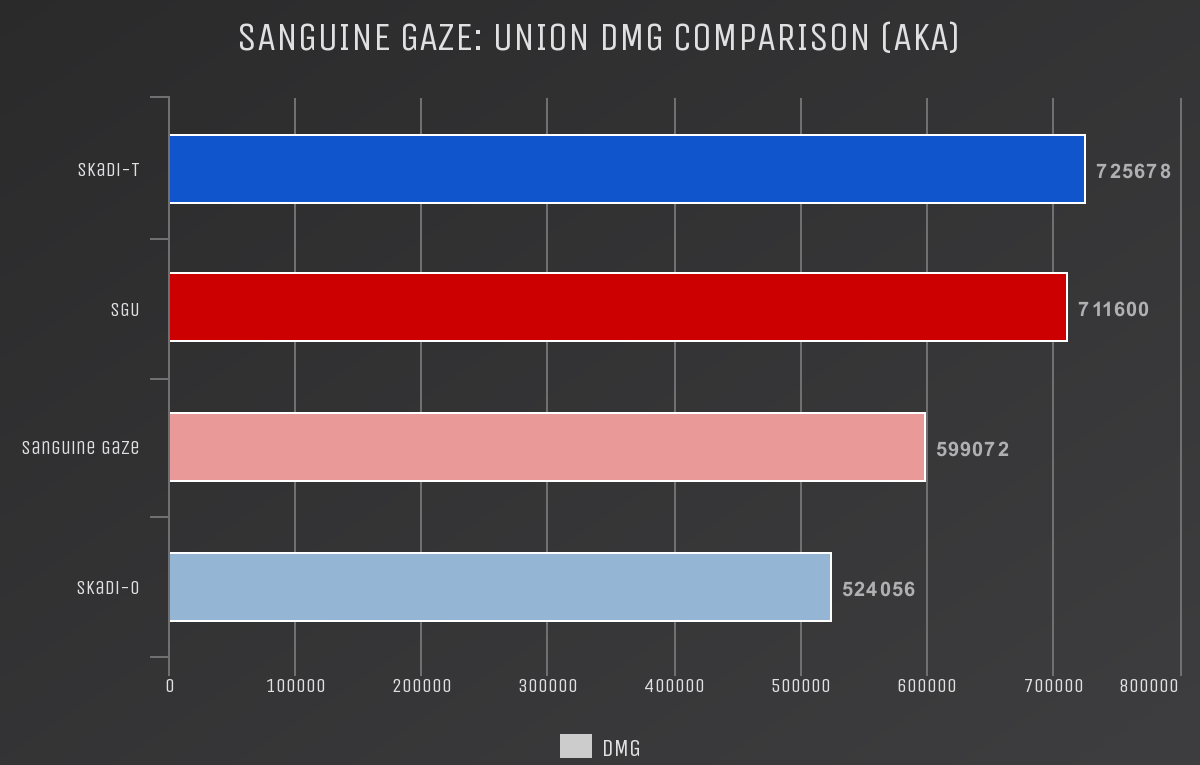 For AKA’s tests, SGU comes very close to Skadi-T’s performance while Skadi-O did the worse amongst the four. However, keep in mind that in most cases, AKA needs to use her ultimate multiple times. Unfortunately, only Skadi-T and Skadi-O provide the SP-regen that she needs to use her Ult several times. Therefore, SGU is not an idealistic replacement/substitute for AKA.

If you wish to obtain SGU and max it, you need a total of:

Keep in mind that PRI-ARM weapons are only accessible for Captains lv81+. 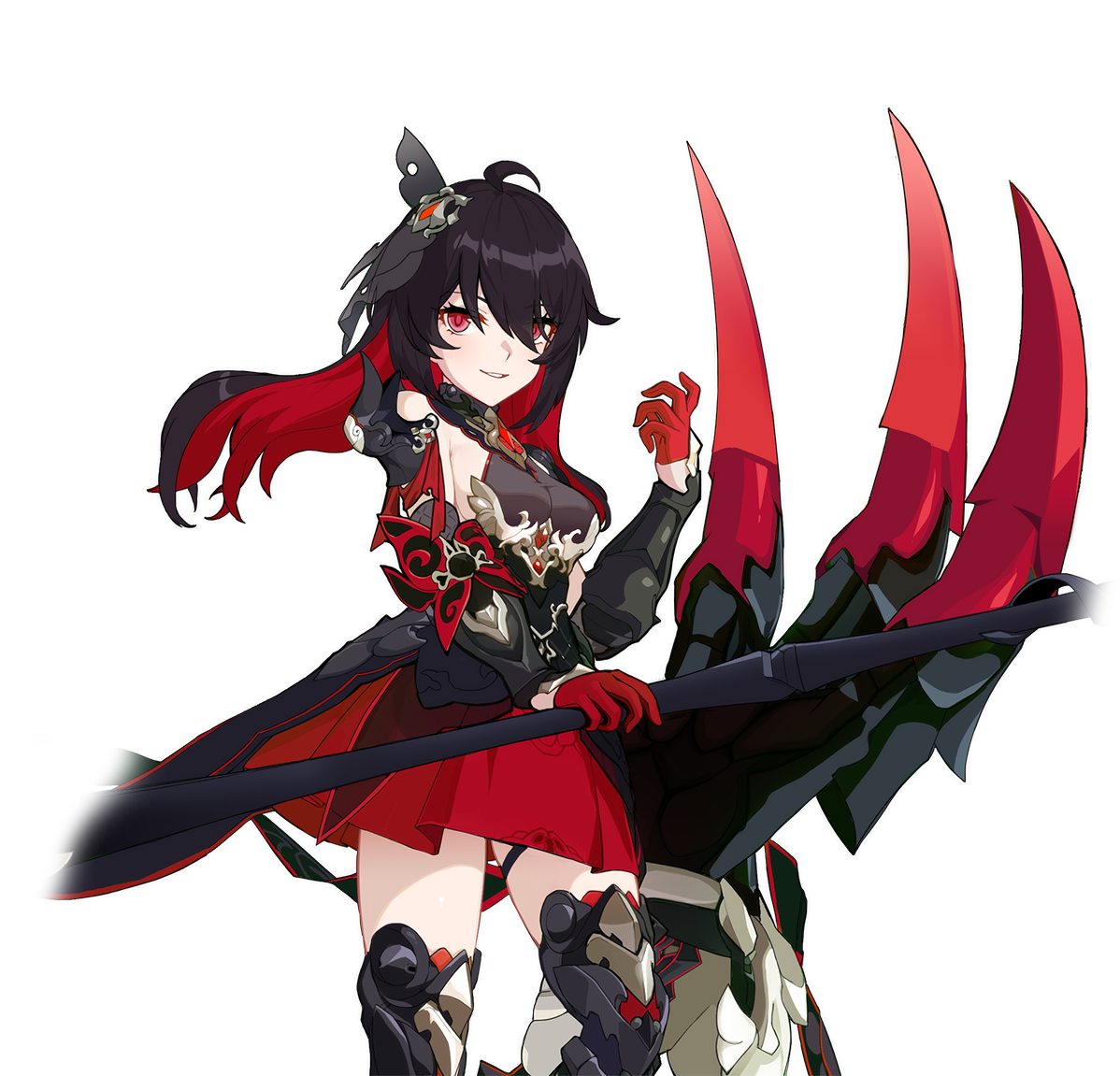 Without a doubt, Sanguine Gaze: Union is the best weapon for Starchasm Nyx. The many passive DMG buffs it provides synergizes well with SNyx’s playstyle. SGU addresses SNyx’s largest problem: lack of SP. SNyx can use SGU’s wep’s active to gain more Carmine Gashes quicker so she can ult sooner. In addition, SGU provides a bit of crowd control to ensure some stable damage output. 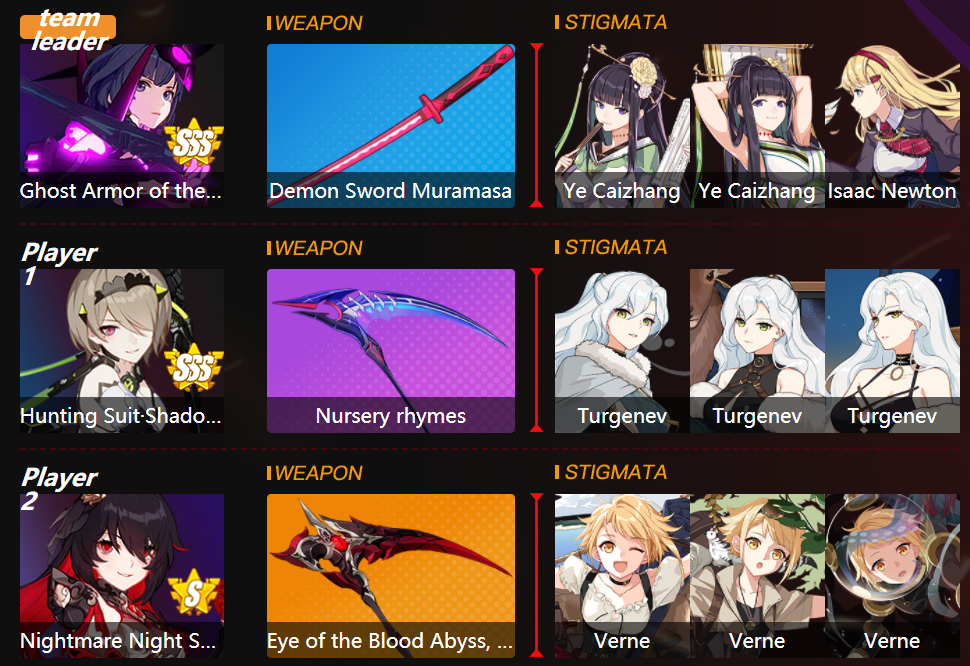 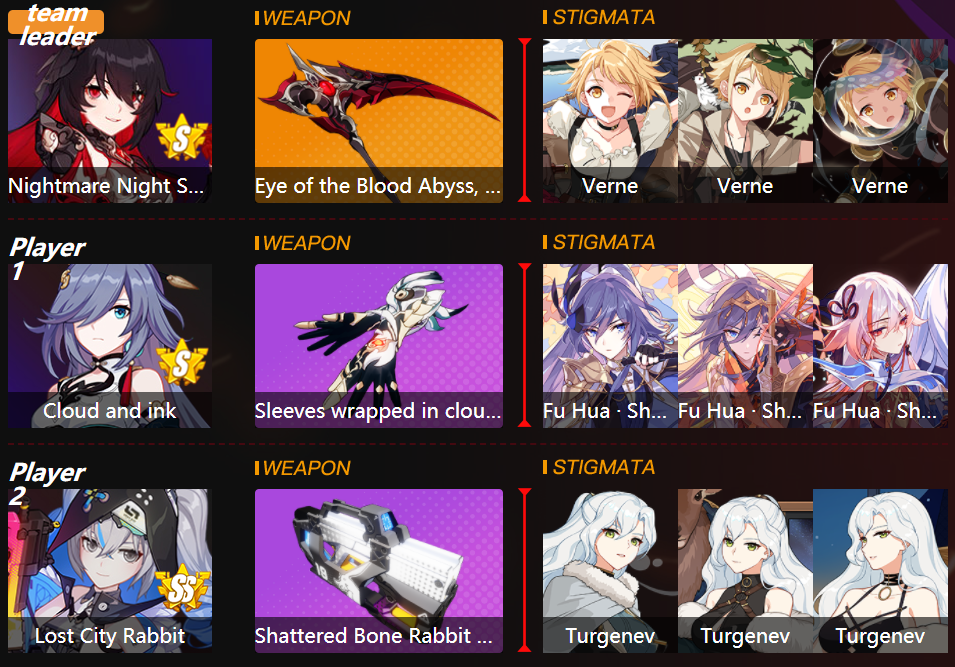 Sanguine Gaze: Union is a strong Ice-DMG DPS scythe. It provides very powerful Ice DMG and TDM buffs. In addition, it also helps Starchasm Nyx reach her ult sooner and more frequently, thus maintaining Ult-DMG consistency. However the SP-regen is provides applies to only SNyx. Therefore, if you want to be able to properly use SNyx, I highly recommend getting this weapon. This scythe is a must-have for the valkyrie to function.

You’ve reached the end of this weapon guide! I hope you enjoyed reading this guide! If you wish to visit me, my discord ID is Reinbex #1347. My Armada’s ID (NA) is 1019 and its Discord link is https://discord.gg/bVBRkF4. If you have any questions or just want to visit, don’t hesitate to say hi! 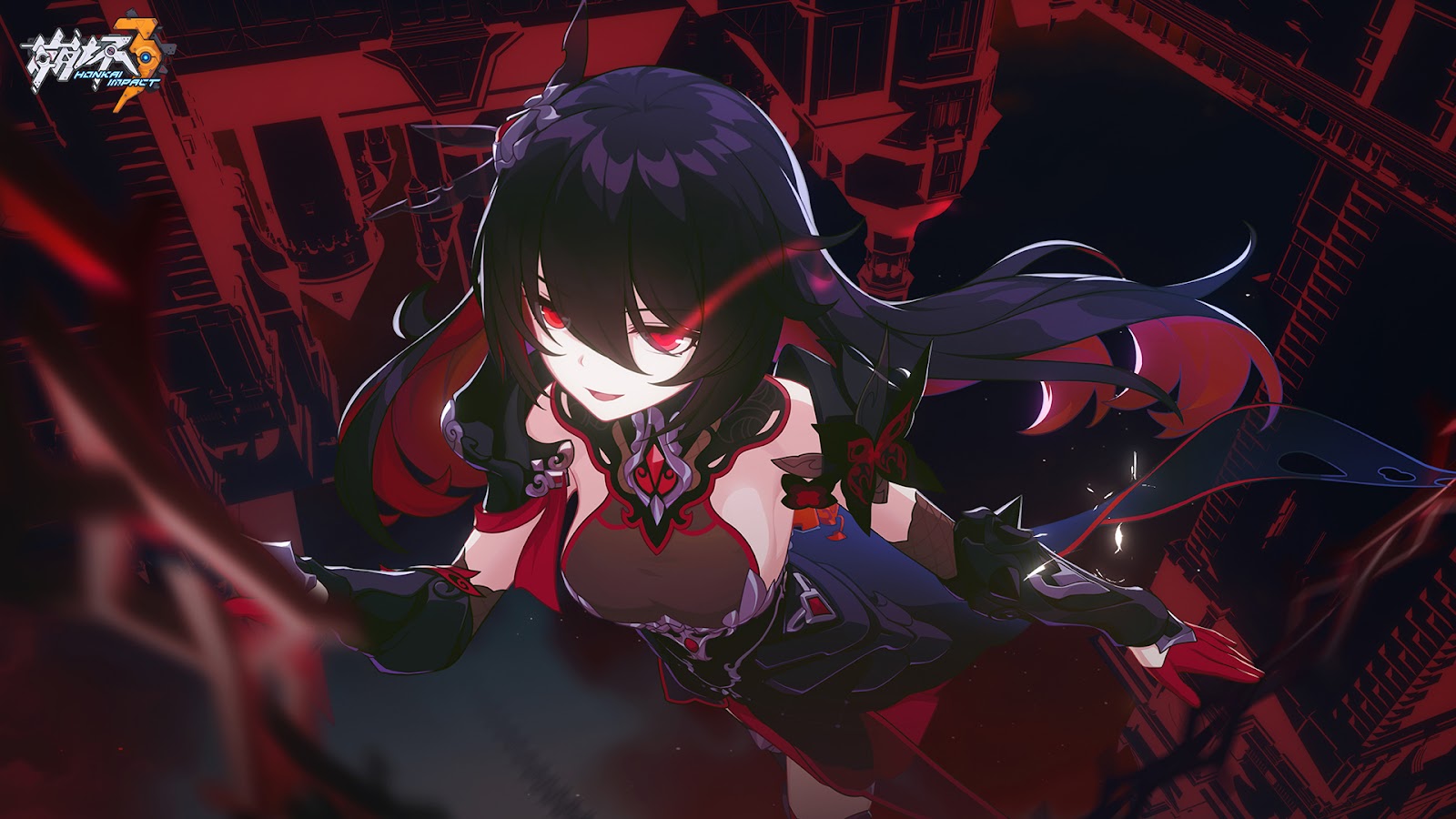