Oblivion Down Weapon Guide by Reinbex

Hey, Captains! Today we are going to be taking a look at the new PRI-ARM gloves weapon: Oblivion Down introduced in v4.8. Oblivion Down is a Fire-based DMG gloves-type weapon. It is the PRI-ARM upgrade of Fenghuang Down and revolves around dealing hefty Fire DMG. In this guide, we will review the weapon’s functionalities and where it excels best at, but we will not go over the Divine Key aspects of this weapon. For the sake of convenience, the weapon will be abbreviated to OD in this guide.

★ Stats below are all Lv.65 figures

Having bathed in blood and fire, the Key of Sentience emerges anew and as a sublime lotus absorbing both Yin and Yang energy and condoning all mortal sins. As the petals spin, all worldly afflictions shall perish.

[SP: 0] [CD: 26s] Unleash the Key of Sentience’s power to immobilize enemies nearby for up to 8s (up to 3s for elite enemies or bosses). 1s after being attacked by wielder or her teammates, immobilized enemies nearby will recover and take 2,150% ATK of Fire DMG (each enemy only takes the damage once). 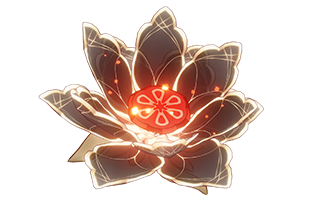 Immobilizes enemies in a large AOE and deals Fire DMG. Like its normal counterpart, OD is also capable of immobilizing enemies. Its now 0-sp cost but (shorter yet still) long CD effect can stop many enemies in a large AOE easily. Strictly by itself, this effect isn’t too impressive, but this wep’s active is how to inflict Deranged status onto enemies.

Note that even if the wielder does not attack and free immobilized enemies within the allotted time, the enemies will still take the 2150% ATK of Fire DMG and become Deranged.

Deranged enemies get inflicted Fire DMG up to 6 times. While Deranged, enemies will, for 15s, intake 200%/300%/400%/500%/600% ATK of Fire DMG. With a 1s CD and a total of five Fire DMG inflictions, Deranged enemies only receive this damage when the wielder directly attacks the enemy.

After the 5th trigger, a final 1500% ATK of large AOE Fire DMG is unleashed. All in all, it's simple Fire DMG, nothing too complicated. However, it can deal some massive damage under the right circumstances of stacked buffs and debuffs.

Although difficult to tell, Deranged enemies will have a dark particle effect on them.

Provides TDM and SP-recovery buffs. OD’s passive has been updated to provide the wielder with a 35% TDM at all times, which is a good standard buff. In addition, the 30% SP-regen for the wielder makes it easier to ult sooner while they are attacking.

First, here is a side by side comparison between Fenghuang Down and the new PRI-ARM Oblivion Down. Gloves are compared at their max levels. 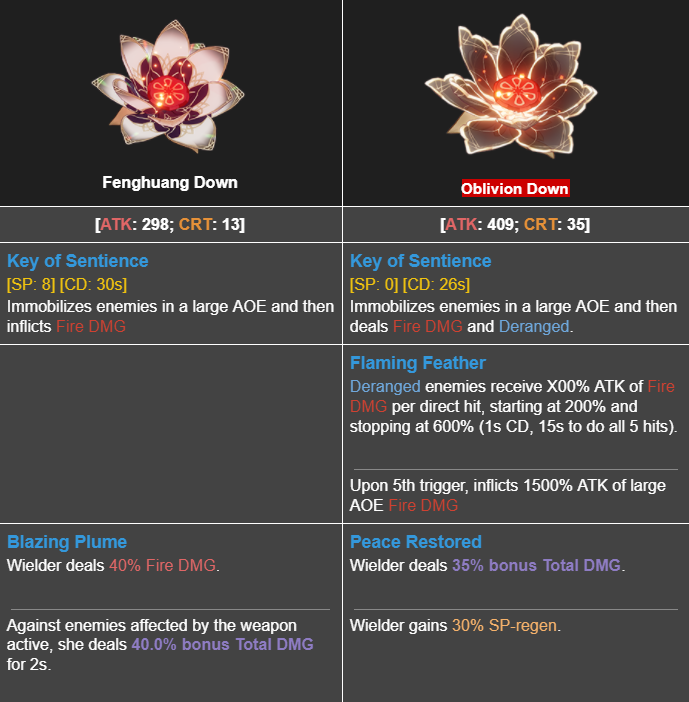 Since OD is more suited for Fire-DPSing it will be compared to other similar gloves. All gloves are compared at their max levels. 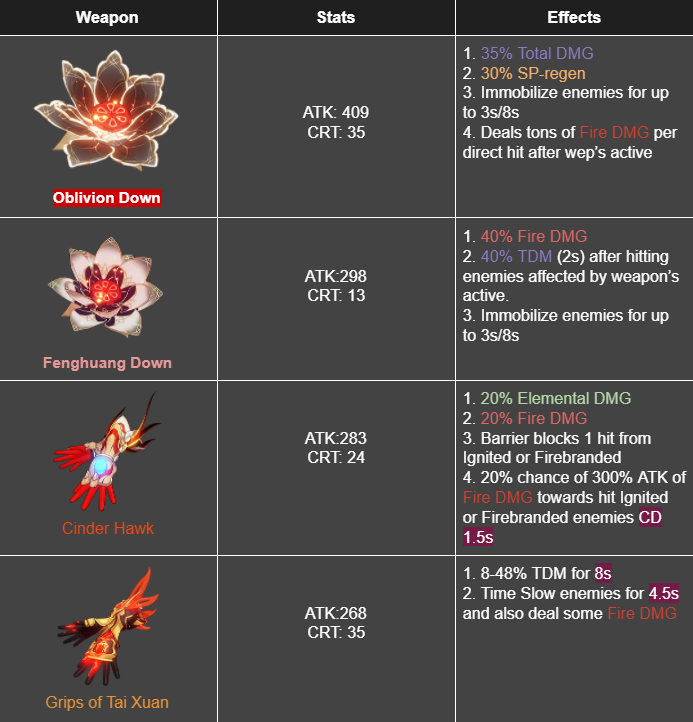 There were a total of 4 DPS tests for OD. Phoenix was used to test each pair of gloves alongside the best universal Fire-DPS stigmata set: Leeuwenhoek TB + Thales M. The test sequence was:
(A for basic button, B for ult button)

But to best utilize OD, its wep’s active was used at the start of its test instead. 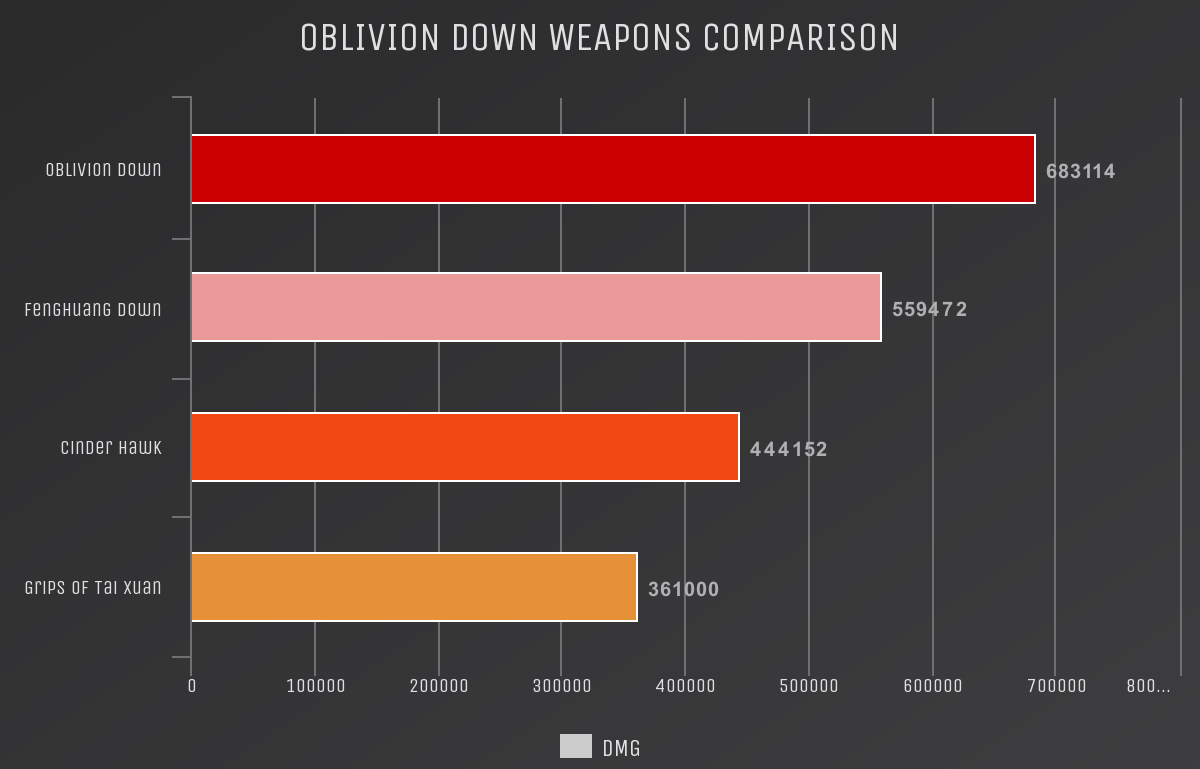 Based on the testing, it can be observed that OD is the best performing Fire-DPS gloves weapon amongst the four. With just Phoenix & her stigs and no other sources of buffs, OD outperforms the other gloves from 18.1 up to 47.2%.

If you wish to obtain OD and max it, you need a total of:

Because this is a divine key, OD can only be crafted once and must use Fenghuang Down.

Keep in mind that PRI-ARM weapons are only accessible for Captains lv81+.

Thales T + Mei: BP M + Newton B - A stronger stigmata set that only has a short window of time for its powerful effects.

Thales T or Gluttony T + Musician MB - A f2p-friendlier option that boasts some decent DPS and decent supporting at the same time.

Both Phoenix and Azure Empyrea are compatible with Oblivion Down. They’re the only Fire DMG gloves-type valkyries in the game at the time of writing this. The main idea for utilizing OD is to stack up as many buffs and intake-debuffs at once so OD’s Flame Feather passive skill inflicts as much Fire DMG as possible to the Deranged enemies.

Oblivion Down is a strong Fire-DMG DPS gloves. As a PRI-Arm, it provides both TDM and SP-regen to help its wielder quickly ult down her enemies. The powerful Fire-DMG it inflicts on enemies gets more powerful everytime it gets triggered. Players can stack buffs/debuffs to time with the Fire-DMG for some large numbers.

However, since it’s a rather niche weapon for Fire DPS users and that it still has a long CD, it’s only most suitable for Memorial Arena. While it does give players access to more ways to defeat certain enemies, its rather niche requirements unfortunately deems it not recommended for free2play. It's not worth the time and resources for the major playerbase to pour into despite the interesting new avenues it opens up. Oblivion Down is mainly for players who are either struggling to get the stronger DPS-options or want more ways to tackle enemies weak to PSY and/or Fire.

You’ve reached the end of this weapon guide! I hope you enjoyed reading this guide! If you wish to visit me, my discord ID is Reinbex #1347. My Armada’s ID (NA) is 1019 and Discord link is https://discord.gg/bVBRkF4. If you have any questions or just want to visit, don’t hesitate to say hi!