World’s Best Hacker [Haxxor Bunny] Bronie has arrived! She’s an SP, PSY-type battlesuit who can summon drones and cast QTE on standby to support teammates. She can also cast Ultimate on standby, which deals high Ice DMG and greatly enhances the team.

In this guide, we will go in-depth with Haxxor Bunny’s skill, her compatibility in various equipments, also her synergy with other battlesuits! Haxxor Bunny will be called Bronie in this guide.

Opinion of the battlesuit

S⭐- Unlock 75% of her potential.
One of the important support skills and one SP skill – Logic Coverage & Accelerated Compilation – are unlocked that will boosts team and entities’ Ice DMG and Elemental DMG respectively. Also unlock a skill that will restore Bronie’s SP for 10s.

SSS⭐- Unlock 100% of her potential.
Basic stats and few skills are upgraded in term of numbers. New SP skill – 404_Not_Found – is unlocked that can restores Bronie’s SP for 8s.

You can skip this section if you already played the tutorial stage in the game. 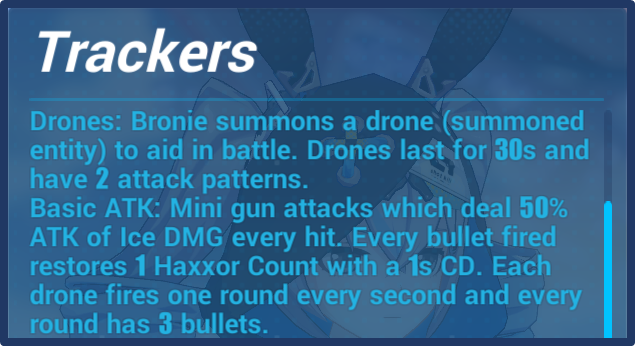 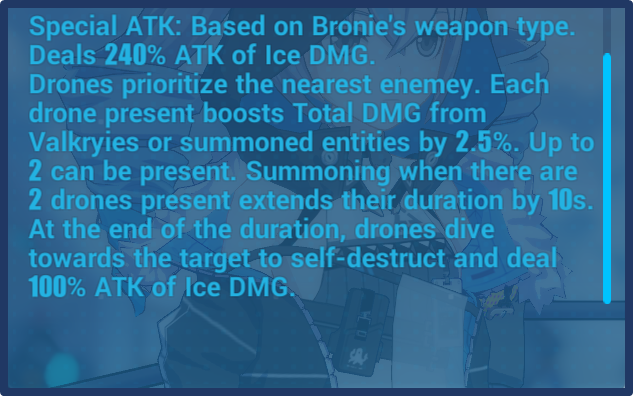 Casting weapon actives enables drones to fire 3 bonus bullets every round for 7s.

Step sideways to dodge attacks. Can be performed twice in a row. 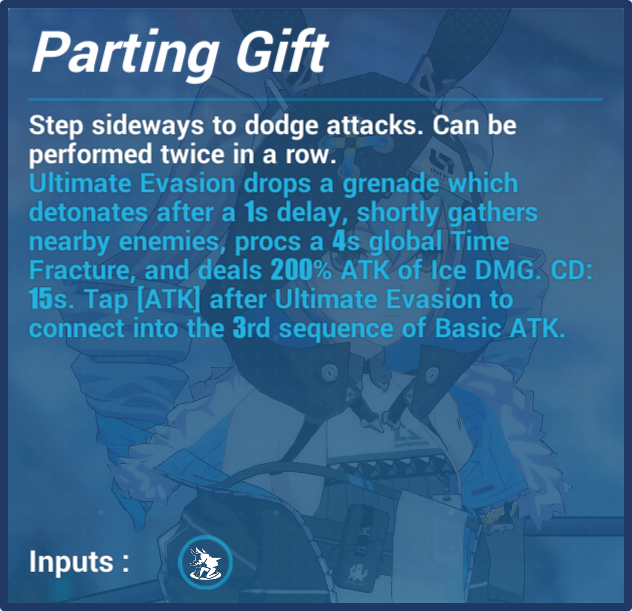 Use submachine guns to shoot. Evasion enables the next sequence. 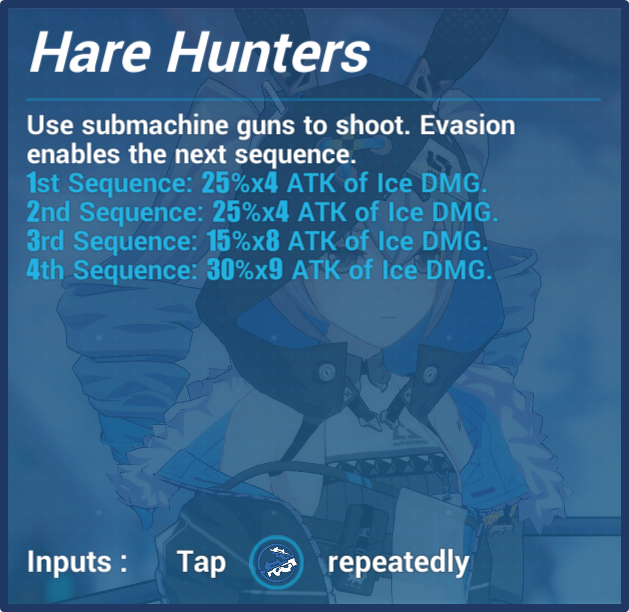 QTE: Triggered at full Haxxor Count and when there’s a targetable enemy. Consumes all Haxxor Count to deal 1080% ATK of Ice DMG and summon a drone (summoned entity). Performing Haxxor Bunny’s QTE doesn’t require her to be switched in. 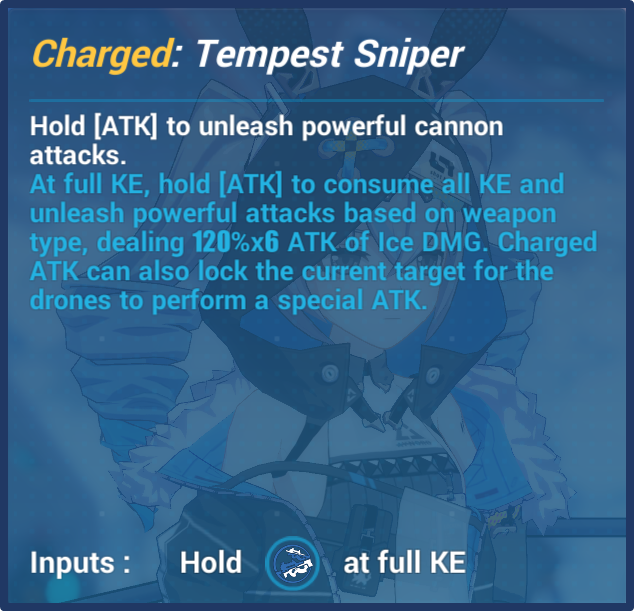 Charged/Combo ATKs from teammates can coordinate drones (if present) to perform a special ATK and restore 1.6 SP per second for Bronie for 10s. Subsequent procs reset the duration. CD:2s.

Unleash mass bombing upon enemies in front of Haxxor Bunny. 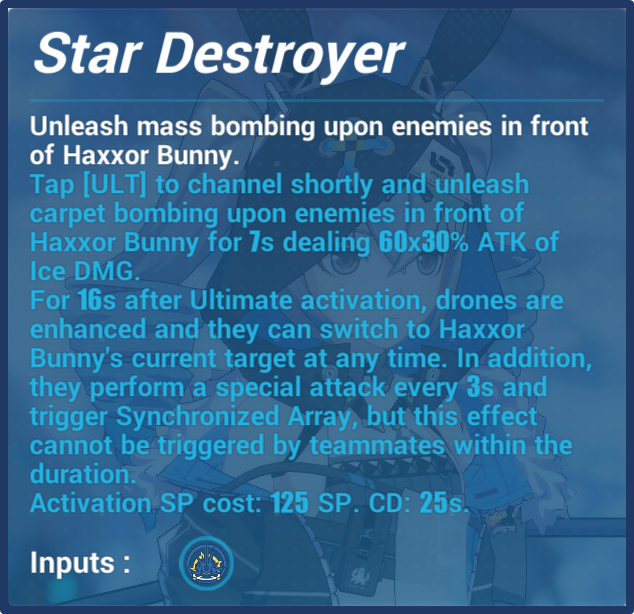 When deployed, Bronie restores 2.5 SP per second for 8s. Can only be triggered once every 10 minutes in Open World. 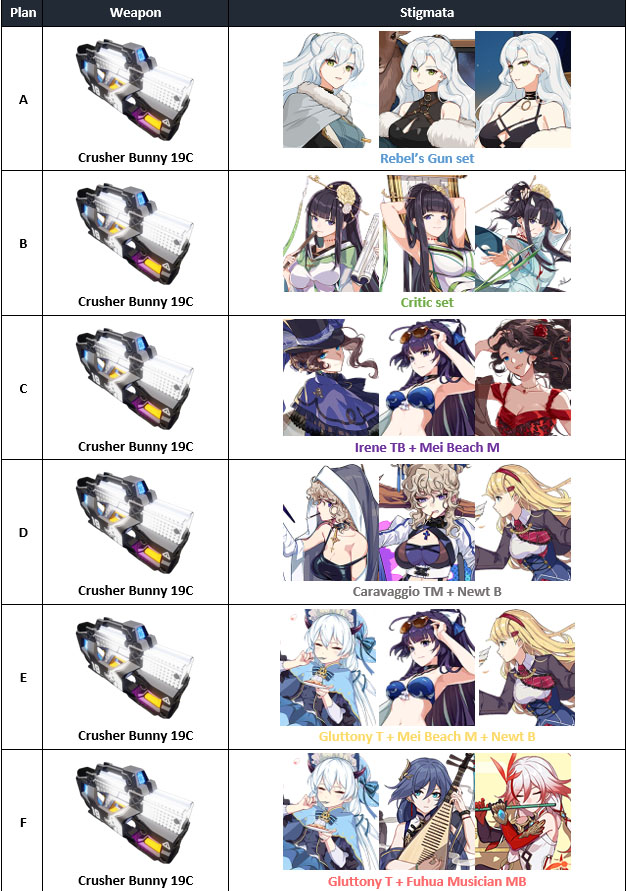 Bread and butter for Bronie. This set is Bronie’s signature equipment, so naturally it works the best on her.

Bonuses that Bronie will gain by equipping CB19:

Rebel’s Gun set is Bronie’s signature stigmata. This set, just like its counterpart weapon, is only suitable for Bronie. This is because there are very few Valkyrie with Ice DMG and all of them are focused on DPS. While Bronie’s are the only Valkyrie that are Ice Support and can summon entities. Below are the summarized bonuses that each piece gave to the host and team:

Critic set or famously known better as Jin Shengtan is one of the best sets for boosting Elemental DMG for the whole team.

Irene Adler is another great stigmata set that also boost Elemental DMG instead of Ice DMG only.

Caravaggio is an old stigmata set that probably aren’t widely used anymore in the meta field because the lack of new Support Valkyrie that can summon entity, but with the arrival of Bronie, this set can revived back to be used if you have it in your inventory.

This combination of stigmata is very famous as one of the best support stigmata combination whether for Physical team or Elemental team.

The F2P set for support stigmata combination. Fuhua Musician can’t provide too much Ice support because they mainly for Fire Team, but it can still be taken advantage of.

In this comparison, not only we will compare each gearing plan, but also the difference of damage output by HoR with the support from different rank (A, S, SS, SSS) by Bronie. 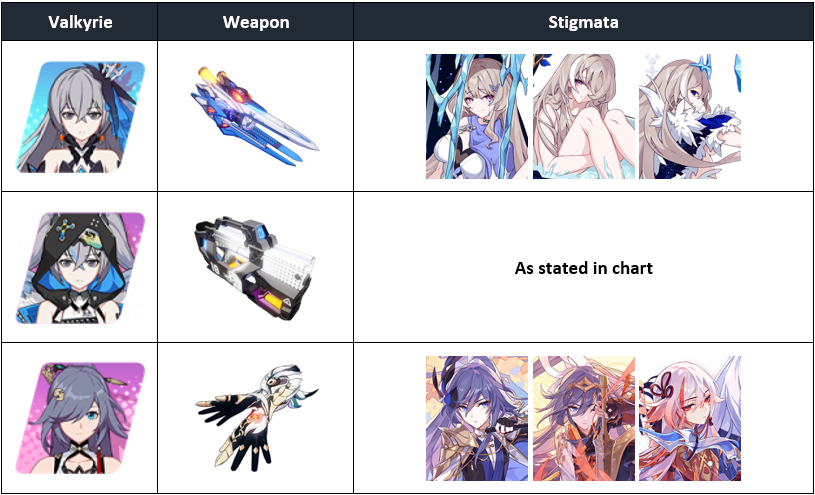 Based on the chart, as expected, Rebel’s Gun set overwhelm all other support stigmata in each rank of Bronie’s battlesuit. It can be observed that in each rank from A to SSS, the position of each stigmata is almost the same. To sum it up, the suitable stigmata set for Bronie are as following:

While Bronie’s are promoted as a mid-range sustained DMG dealer, she is more suitable as a support to a main DPS Valkyrie. Below are some of the recommended teams for Bronie to shine. Please note that these lineups are not what Bronie is limited to.

This team is the very term of simple and effective. Bronie’s QTE + Ultimate and AE’s Magma Melt + Ultimate is the best possible buff for HoR to let loose and destroy everything. Add the best combination of stigmata plus weapon then you can easily clear Abyss. 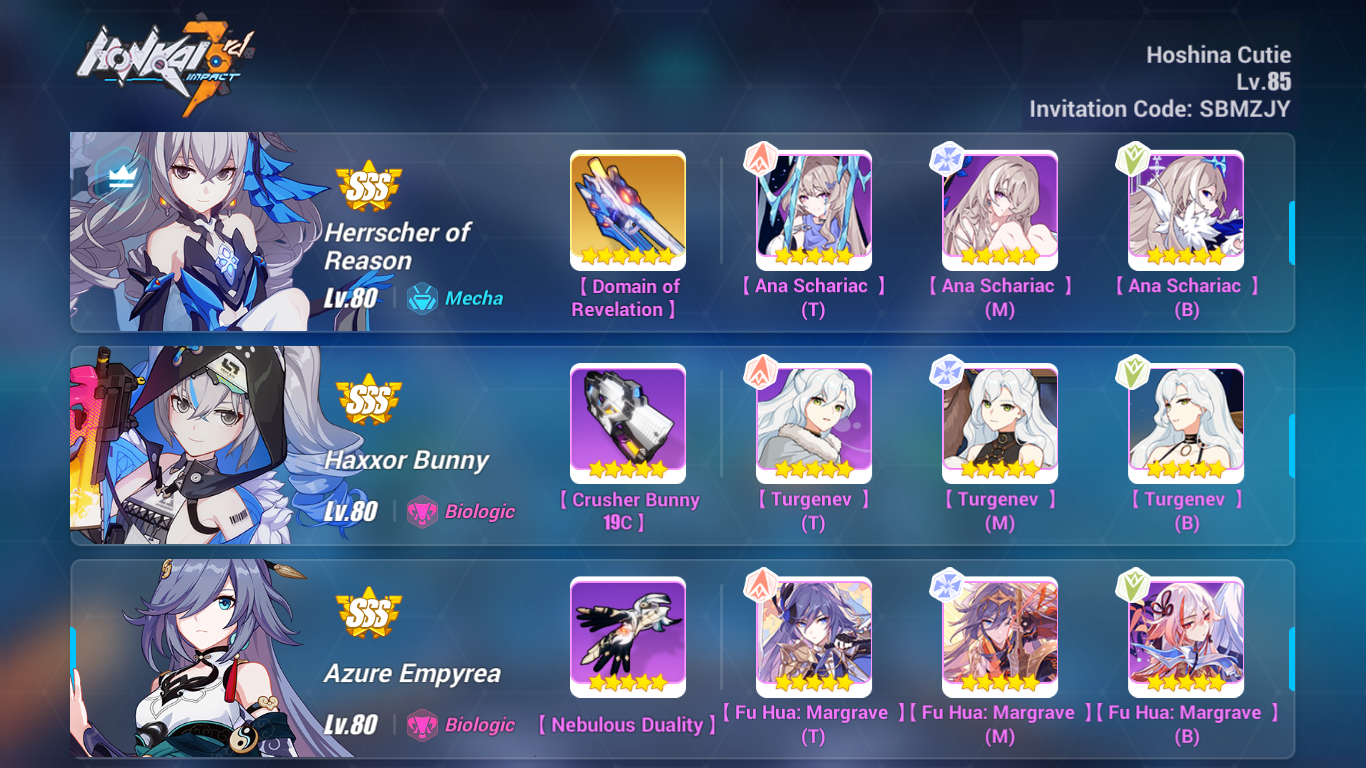 This team use the exact same skill from Bronie and AE just like the team before (Bronie’s QTE + Ultimate and AE’s Magma Melt + Ultimate). The only difference is the main Damage Dealer has been changed to AKA, another great Ice DPS battlesuit. 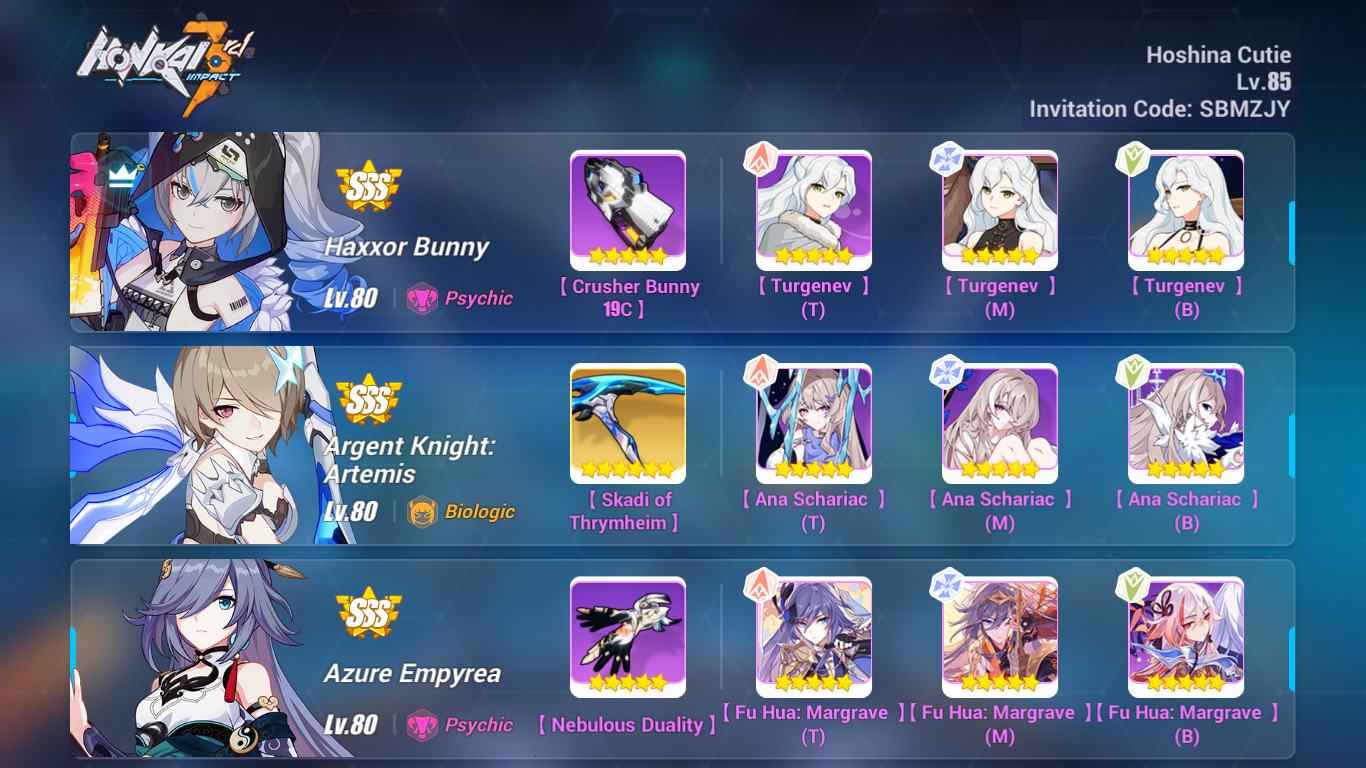 While this team looks peculiar with LE and VP as Lightning DMG Dealer, if Bronie are equipped with Caravaggio TM Newt B, she can be paired with VP to support LE that works as a DMG Dealer. As Bronie’s QTE can be triggered without her switching in, she can still trigger the stigmata bonuses with this QTE.

In the video below, you can see that although Bronie play a miniscule part on the field, her Weapon Skill and Ultimate are greatly sought as it can boost team’s Elemental DMG and trigger support stigmata respectively. 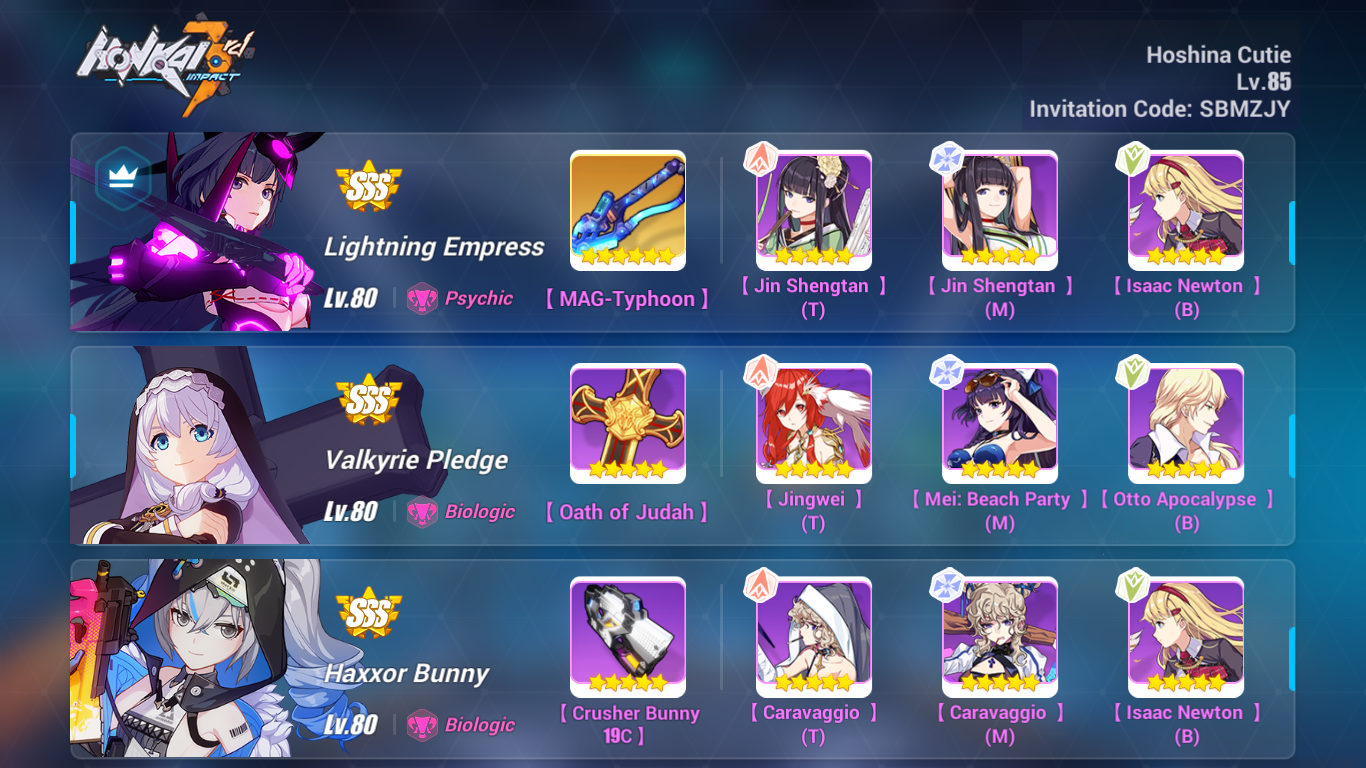 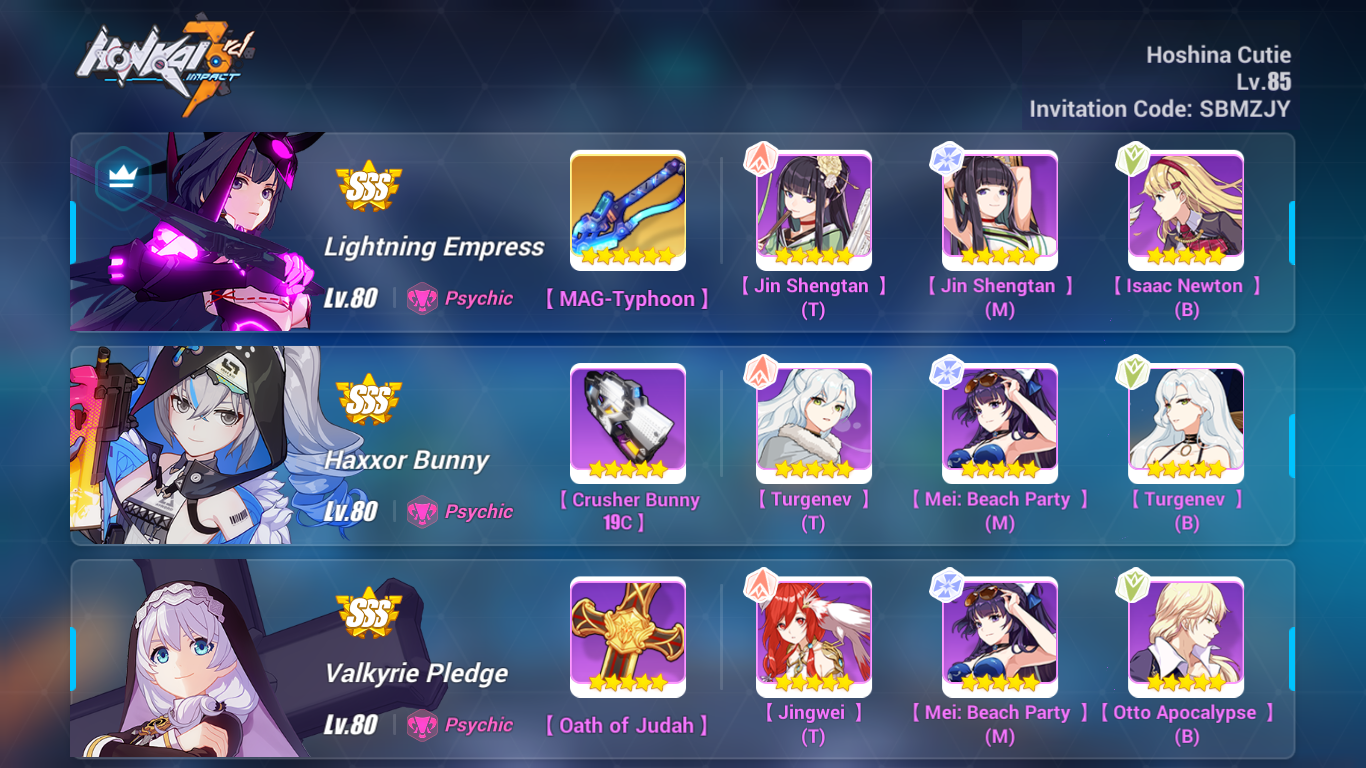 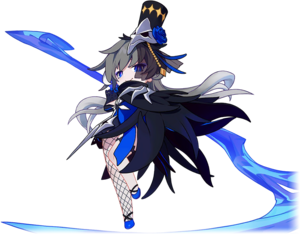 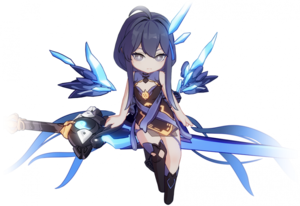 Both Selune’s Elegy and Water Edge are a suitable ELF to be equipped in Bronie’s team. Clearly it is because both are Ice DMG / Support, and it is highly beneficial for Ice Teams.

In conclusion, Bronie is a great addition to any of Ice Teams. While she is a bit lacking in term of DPS, she makes it up with her plentiful support skills and standby QTE + Ultimate.

We will get Bronie at A-rank from the event and the fragments can be collected in the game. In term of rank, you should at least get her to S-rank to at least unlock half of her support skills. And if you can, upgrade her into SS-rank to unlock most of her skills and make her a really good Support Valkyrie.

For equipments, even if you cannot get her stigmatas, try to get her signature weapon because it has the highest synergy with Bronie.

With that said, I highly recommend you to invest on her until she became SS-rank! Even if you do not want to use her in your Ice Team, she is very flexible and can be inserted into other Elemental Team because of her QTE and Ultimate that can be unleashed even when she is on standby to trigger Support Stigmata.